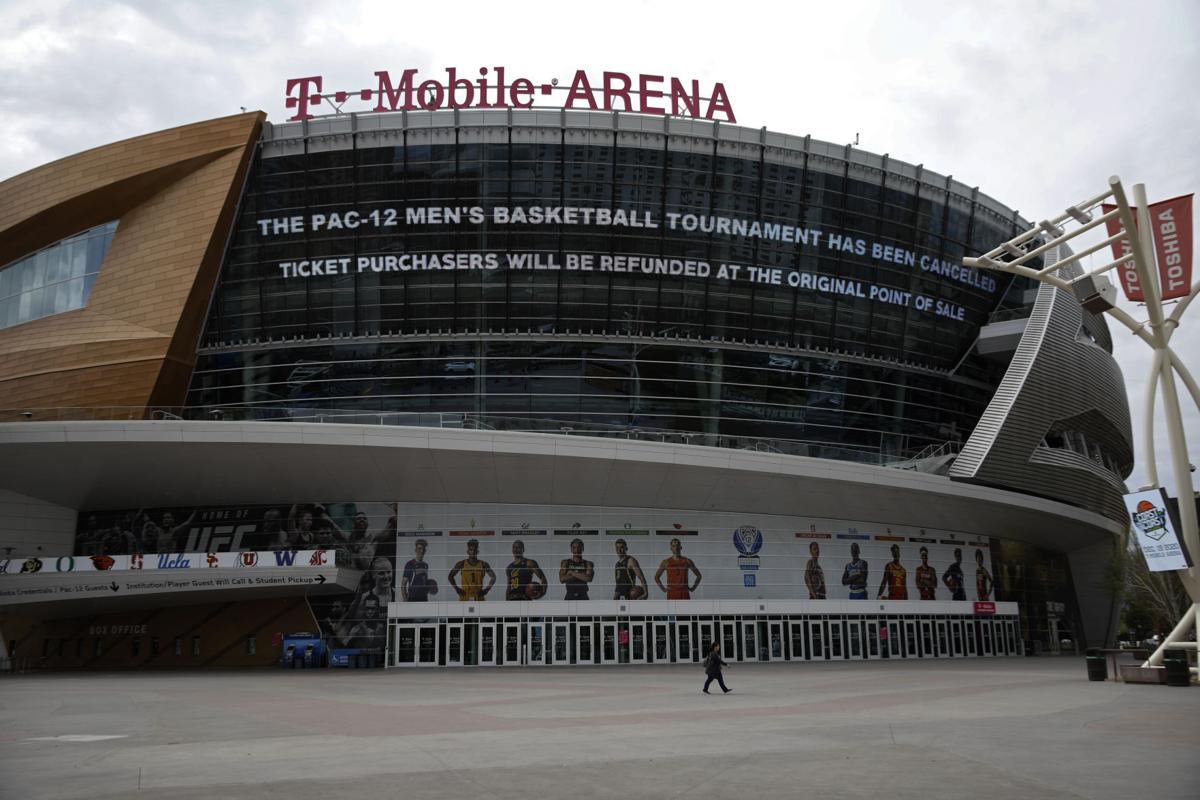 A sign at T-Mobile Arena informs fans of the cancellation of last year’s Pac-12 men’s basketball tournament amid coronavirus fears. The tournament returned this season, but with no fans in the stands. 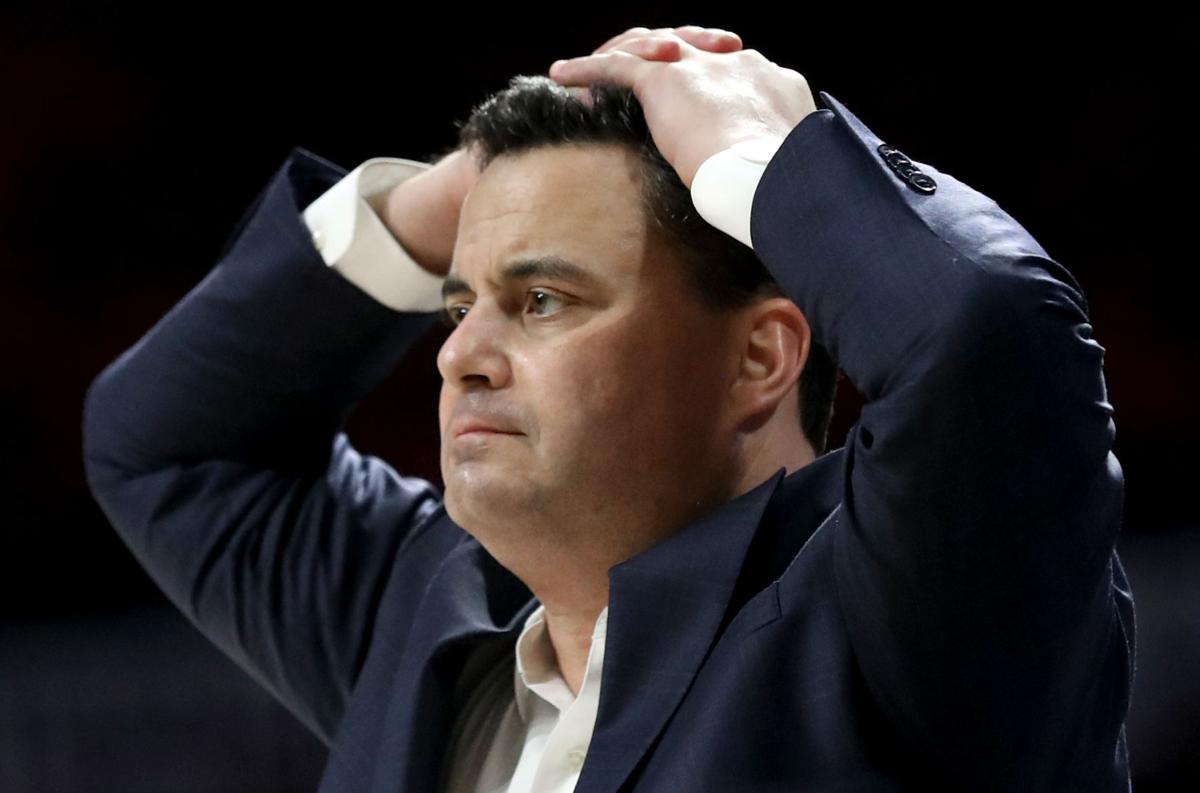 Arizona coach Sean Miller and his Wildcats missed out on the 2020 NCAA Tournament because of the coronavirus.

Except the Washington State Cougars didn’t snip nets, didn’t bathe in confetti and didn’t hang a banner after they beat Colorado 82-68 in an otherwise obscure Pac-12 Tournament first-round game the night of March 11, 2020, at a lightly attended T-Mobile Arena in Las Vegas.

That game happened to be the last college basketball game fully played in the 2019-20 season, only nobody knew it at the time.

All anybody knew over the next 24 hours, 48 hours, two weeks, two months, one year, was that COVID-19 changed everything constantly.

And at least in the realm of U.S. sports, nowhere did the confusion and frustration hit more bluntly than in college basketball, which was less than a week away from its defining event.

The 2020 NCAA Tournament was canceled while the NBA, Major League Baseball, PGA Tour and other events still had hopes of continuing their seasons, even if their delays turned out to be longer than anticipated.

“Devastating!” UA coach Adia Barnes tweeted on the afternoon of March 12, when her Wildcats women’s team realized its first NCAA Tournament appearance in 15 years wasn’t going to happen. “I just had to tell my team that our season is over. Just like that. We worked so hard.”

By the evening of March 12, the NCAA had also called off spring sports championships, meaning the fourth-ranked UA softball team’s season would end at 21-3 instead of in the Women’s College World Series; the Wildcats’ baseball season was over, too, with the team posting a 10-5 record.

UA’s football spring practices were forced to end after a week, and its April 4 spring game was called off, while Arizona’s golf, tennis and other spring sports similarly ground to a halt.

Meanwhile Tucson’s three professional sports teams — the Tucson Roadrunners, Tucson Sugar Skulls and FC Tucson — all announced on March 12 that they were either postponing or suspending their seasons because of the virus. The same went for the World Baseball Classic qualifiers, which were scheduled to begin that day at Kino Stadium.

In basketball, the timing couldn’t have been much worse. The UA women’s team was expected to host first-weekend NCAA Tournament games at McKale Center, with high aspirations after winning the 2019 NIT title and putting together a 24-7 record in 2019-20, while the men’s team appeared to have clinched a spot in the NCAA Tournament by beating Washington in the first round of the Pac-12 Tournament.

Just four days earlier, though, the UA men’s team could have seen a hint that it might never happen.

On March 7, after Washington upset Arizona 69-63 at McKale Center, the Huskies opted not to return home to Seattle.

A day before the game, Washington became the first major university in the country to cancel on-campus classes after a staff member tested positive for the virus and an online petition to close the campus generated 26,000 signatures.

The Seattle region had reported the first cases of COVID-19 and the first death. It had become the West Coast’s early epicenter of the coronavirus.

While Washington coach Mike Hopkins said he wasn’t “worried about all that,” he took his guys straight from Tucson to Las Vegas instead of having a few days to rest at home.

“I know it’s a concern,” Hopkins said, “but I think that the university and everybody is showing great leadership in the decisions that they’re making.”

That news arrived just a few hours before the Wildcats hit the floor to beat Washington 77-70 in the Pac-12 Tournament, and except for the hand sanitizer stations all over T-Mobile Arena, things still seemed pretty normal.

But about an hour after the Wildcats’ victory, the Pac-12 announced that fans would not be allowed for the final three days of the tournament, meaning the “McKale North” effect of having UA fans fill much of the gigantic arena would be gone.

“Crazy,” UA guard Dylan Smith said that evening. “It’s gonna be awkward playing in a silent gym but we’re gonna have to work through it.”

The science was evolving quickly, as was the Wildcats’ grasp of it. With then-wisdom mostly about surface contamination, Smith noted that you “gotta wash your hands and bathe and hope not to get it.”

Saying not having fans would “definitely be different,” UA coach Sean Miller deferred to the experts.

“Obviously there’s brilliant people in our world, if that’s the decision,” Miller said.

It was the first of many decisions to affect the Wildcats. On the fateful morning of March 12, UA players woke up and had a brief team meeting, then took off to eat breakfast while staffers and coaches prepared for walk-through practice before their quarterfinal game with USC at 2:30 p.m.

But at about the same time, the Big Ten, SEC and Big 12 were all canceling their conference tournaments, leaving the Pac-12 little choice but to follow suit.

No fans, and no players, either.

“The past 24 hours have felt like a bad dream,” UA guard Nico Mannion tweeted and, as it turned out, he and Miller only knew the half of it.

Shortly after the Pac-12’s announcement, Miller jumped on a booster’s jet back to Tucson, with everyone believing at least at that point that some sort of NCAA Tournament would still follow.

The NCAA still had a week to figure out some sort of way to make it work, after all.

“Coach kind of left it like, ‘Hey, we’re planning on going to the tournament and nothing’s changed, we have to proceed as normal,’” UA associate head coach Jack Murphy said then.

But by the time Miller’s plane landed, he was receiving messages telling him the NCAA Tournament was off, too.

Back in Las Vegas, the rest of the Wildcats scattered quickly, and dejectedly. Most headed off with family, while staffers, managers and a handful of players bused home.

They boarded the very same bus that was supposed to ferry the Wildcats just a half-mile to T-Mobile Arena, but instead was reprogrammed for a nonstop ride from the MGM Grand all the way to Tucson.

“It’s almost disbelief,” Arizona center Chase Jeter said, standing outside the bus that afternoon. “I don’t think any of us could have ever predicted this. I don’t know. I don’t know how to react.”

Smith had given it a shot the night before. On the evening of March 11, he tweeted that “2020 might be the weirdest year ever.”

Players are tested almost daily for COVID-19, arenas sit mostly empty except for cardboard “fans” and most everyone involved is asked to wear a mask, eat alone, take health screenings and stay apart from each other.

But it worked, for the most part. The Arizona women canceled three games because of their own COVID-19-related issues. The men didn’t have a single game canceled because of their own issues, while the Pac-12 managed to pull off all but four of the 120 men’s basketball conference games it scheduled.

And the NCAA Tournament appears to be full-steam ahead — though it will cram what’s normally a three-week, cross-country extravaganza fully into metro Indianapolis. The women’s tournament will be played exclusively in Texas.

It’s weird, but maybe that’s better than nothing.

'Cooped up' Cats fans return for first time in a year, relish chance to cheer on team at Hi Corbett

The boys were back after a weekend in Texas. And for the first time in 366 days, so were Wildcats fans.

Mariah Lopez shuts down No. 16 FSU in Wildcats' road win

UA tops Seminoles 1-0 to improve to 14-2. The teams finish their three-game series Saturday in Tallahassee.

Caballeros will host Gilbert on Wednesday with a berth in the state championship on the line.

In or out? Experts weigh whether Wildcats would've made NCAA Tournament if not for ban

“Have been tracking Arizona all season,” ESPN's Joe Lunardi said in an email to the Star, adding “waiting for this question!”

The Pac-12 finished with only two teams in the final AP Top 25 poll, Colorado and USC.

However, James Akinjo makes second team in "District 19" of the NABC's awards.

Terrell Brown and forward Ira Lee have played four seasons of college basketball already, but have a fifth year available if they want it. Both have reasons to use that year seeking resume-polishing experiences elsewhere.

The IFL's decision to cancel the 2020 season and postpone the start of the 2021 schedule forced Tucson to hit the reset button. The club opens its season Friday in Green Bay.

A sign at T-Mobile Arena informs fans of the cancellation of last year’s Pac-12 men’s basketball tournament amid coronavirus fears. The tournament returned this season, but with no fans in the stands.

Arizona coach Sean Miller and his Wildcats missed out on the 2020 NCAA Tournament because of the coronavirus.