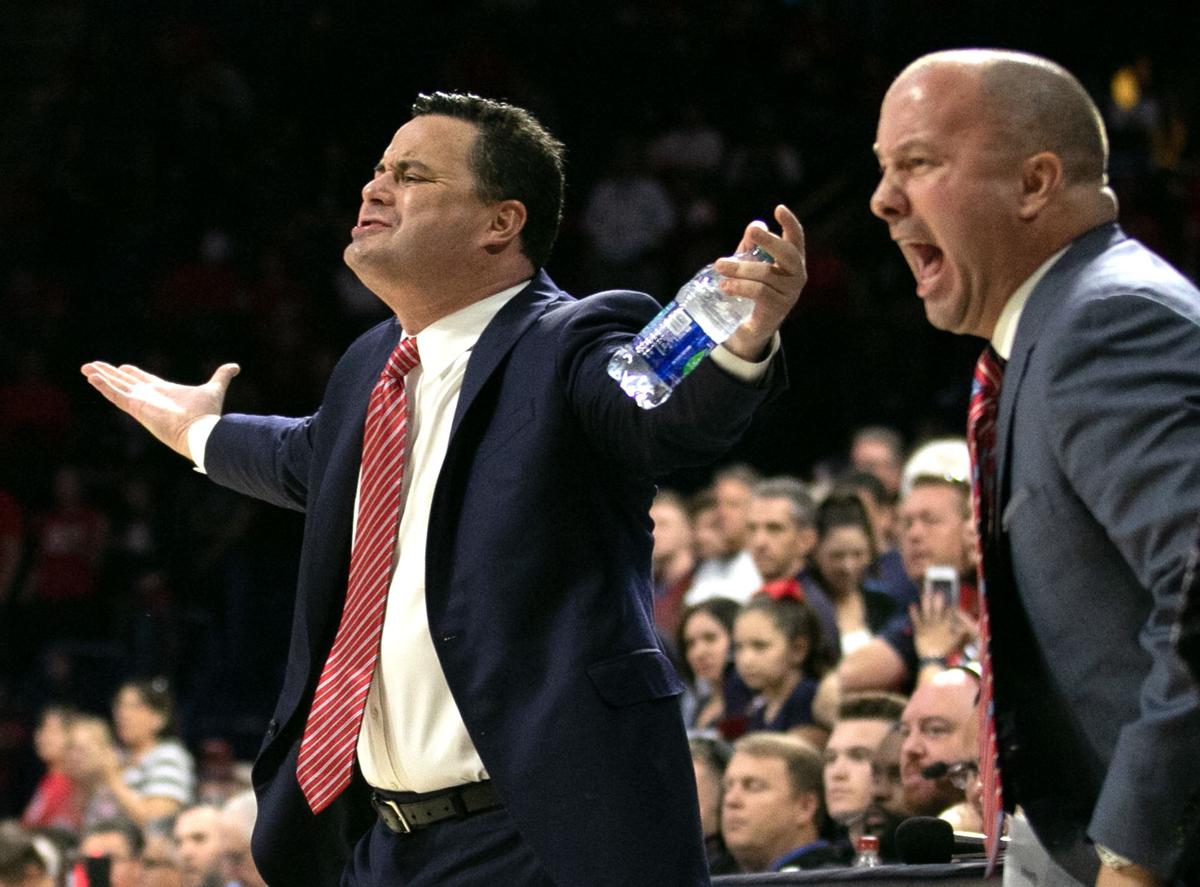 Arizona head coach Sean Miller and assistant coach Mark Phelps give the ref's and earful for a missed call during the second half of their NCAA basketball game against Cal Poly at McKale Center on November 11, 2018 in Tucson, AZ. 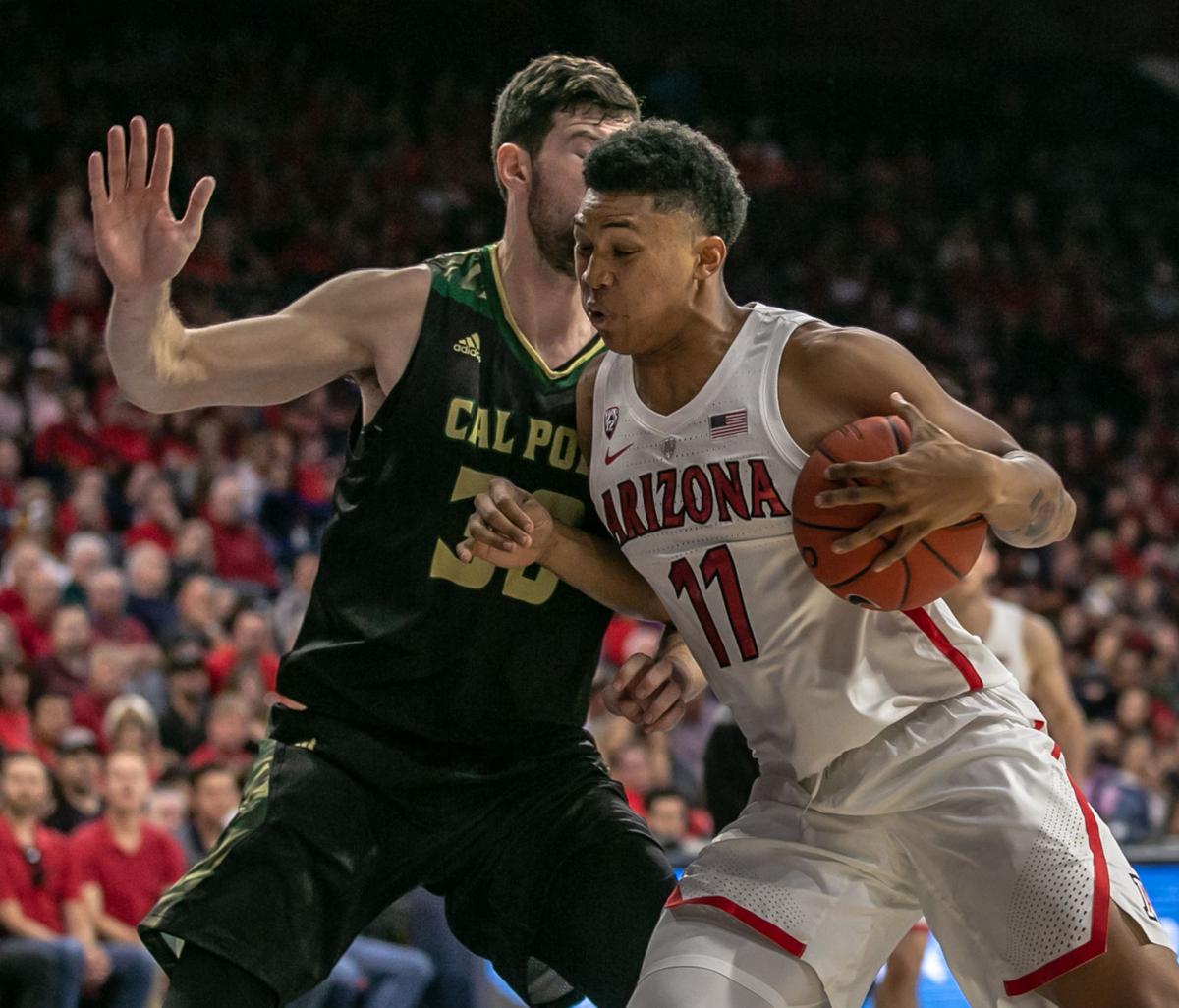 Arizona forward Ira Lee (11) pushes past past Cal Poly forward Hank Hollingsworth (30) during second half action at in their NCAA basketball game at McKale Center on November 11, 2018 in Tucson, AZ. Jeter had 16 points for the game. Arizona won 82-61.

With Ryan Luther and Chase Jeter leading the Wildcats in a 82-61 win over Cal Poly, it's clearer than ever that the Wildcats have a five pretty clear-cut starters at this point.

But Arizona coach Sean Miller also found Sunday against Cal Poly that the next three players in the rotation are becoming well-defined.

Ira Lee had six points and eight rebounds off the bench, while Emmanuel Akot had four points and four rebounds, and Dylan Smith broke his shooting slump by hitting 4 of 7 3-pointers he took.

“I think we have some guys who don’t start the game this year that really contribute,” Miller said. “There isn’t a big, big difference between the starters and I would say three players, maybe four, certainly three, off the bench. They give us a lift.

“Ira is physical, our most explosive big guy who can get second shots and as Ira plays more and more games he’s only going to get better, and Dylan… we’re getting that punch from those eight.”

Of players nine and 10, Miller said, Alex Barcello’s shot “hasn’t dropped right now but he’s another guy who does it every day and it’s just a matter of time,” while noting that “Devonaire (Doutrive) is coming around as well.”

With those eight or nine guys Miller is hoping to carve out a competitive team.

“So maybe (it is) our depth,” Miller said. “We don’t have a ton of size but I think we have some good players who don’t start the game, and with that maybe you can cultivate the hard-playing team, the team that hustles, the team that can pick up fullcourt and a team on a given night can get some scoring punch from guys who don’t start the game. All coaches love that and I think we have the capability of having that here on this year’s team.”

Not surprisingly, Miller was thrilled to see Brandon Williams dish eight assists to no turnovers Sunday, giving him an “infinite” assist-turnover ratio so far this season (13-0).

But it wasn’t just the number that had Miller going: It was also the differences in the two defenses Williams put them up against.

“Game one (against Houston Baptist) was very frenetic, a denying man-to-man team that really thrived on forcing turnovers, and tonight was a college matchup zone that Cal Poly has been playing and they’re good at it,” Miller said. “They know what they’re doing. For him to have 13 assists to no turnovers is a really good sign for him and also our team.”

Miller added that Williams offensively will also “settle in -- some of his drive against bigger people haven’t gone down but as he learns what that feels like I think those drives will start going his way.”

Part of the reason was that HBU shot more poorly than Cal Poly (31.9 to 38.3 percent) and that Ira Lee played against the Mustangs, collecting six defensive rebounds (eight overall).

But still, Miller indicated he saw an overall better effort from the Wildcats.

“Obviously, we learned our lesson in the first game against Houston Baptist,” he said, referring to rebounding. “We worked hard at it, got the message across very clearly. Ira being back helped but our guards have to do a real good job of blocking out and rebounding. We did not do a good job in that first game and tonight we did a better job.

"I don’t know if that’s Cal Poly’s strength but I can only judge us by what we do and I thought we were much more formidable, took it seriously, and had a number of guys working hard in that area.”

Arizona also had seven turnovers against Cal Poly after committing 11 in the first half alone against Houston Baptist.

“It was a tremendous emphasis” in pregame preparation, Luther said. “The reduction in turnovers between this game and the last game was huge for us.”

While the Wildcats don’t have the immense talent they had a year ago, their chemistry might be better. At least that’s the early indication.

Players constantly credit each other when brought out for interviews and, when asked if he’s getting the feeling that this year’s group of Wildcats like playing with each other, Miller said:

“We have a great group of guys,” he said. “They’ve worked hard from day 1. I think all of them are out to prove that our team is better than maybe the outside world thinks. Whether that’s true or not remains to be seen, but collectively they have worked. There’s some guys who have had four or five straight months of a lot of hard work, in the weight room, shooting the ball, not just in our team practice but things they’ve done individually.

“And our freshman class from a year ago – Brandon Randolph, Emmanuel Akot, Alex Barcello, Ira Lee – they gained a lot of experience and they’re hungry and eager to prove that they’re each a better player than they were a year ago. I know with Brandon Randolph, you really see that because of his scoring but I think the other guys are as well, they’ve gotten better.”

Tried to ask Miller jokingly if he let Richard Jefferson in his gym while he was in town to work the game for Pac-12 Networks -- or if Jefferson let the Wildcats in his gym -- but it didn't work.

"I can't answer that because of NCAA rules," Miller said.

Did manage to get an answer for why Chase Jeter rolls up the right leg of his shorts on the floor.

"Everybody keeps asking me that," Jeter said. "I have no reason. I just kind of do it. It’s just my thing.

Our full coverage and a PDF of the box score are attached to this post.

UA shows off full roster in beating Mustangs 82-61 at McKale Center to improve to 2-0.

Arizona has a Sagarin power rating of 32.

Arizona head coach Sean Miller and assistant coach Mark Phelps give the ref's and earful for a missed call during the second half of their NCAA basketball game against Cal Poly at McKale Center on November 11, 2018 in Tucson, AZ.

Arizona forward Ira Lee (11) pushes past past Cal Poly forward Hank Hollingsworth (30) during second half action at in their NCAA basketball game at McKale Center on November 11, 2018 in Tucson, AZ. Jeter had 16 points for the game. Arizona won 82-61.