Former Arizona guard Shane Nowell announced on Instagram he has committed to UNLV.

Nowell announced on April 27 that he was transferring from the Wildcats after playing just 67 total minutes over 19 games as a freshman last season. He also sat out three games late in the season as a result of an apparent suspension for reasons UA coach Tommy Lloyd declined to detail.

“Shane, we noticed, just had some things we wanted to address behind the scenes,” Lloyd said after Nowell dressed in street clothes for UA’s win over Stanford at McKale Center on March 3.

A native of the Seattle area, Nowell is the brother of Jaylen Nowell, who won the 2018-19 Pac-12 Player of the Year award while playing for Washington. Shane Nowell was the only one of three players in the class of 2021 who committed to former UA coach Sean Miller and stuck with the Wildcats, while guard K.J. Simpson headed to Colorado and Shane Dezonie went to Vanderbilt. Dezonie has since transferred to St. Joseph’s.

Nowell, who was also offered scholarships by Washington, Washington State, Montana, Montana State and Oklahoma out of Eastside Catholic High School near Seattle, told the Star in May 2021 that he took two weeks to talk with Lloyd and decide whether to stay with the Wildcats. Lloyd replaced Miller in April 2021.

“It definitely took some time because I wasn’t too sure,” Nowell said. “It was pretty much a matter of what’s the best situation for me, as well as my family, because I didn’t want to go too far away from home.

“But then also once I got to know Coach Lloyd, got to see his coaching style, to see how he plans to really incorporate me, I really liked what he had to say. So it just felt like it was the best scenario.”

Nowell wound up averaging 0.8 points and 0.8 rebounds while playing only spot minutes toward the end of games the Wildcats were decisively winning.

Arizona went with a tight eight-player rotation most of the season, with Adama Bal moving ahead of him and playing spot minutes in several key games late in the season.

Nowell wasn’t made available for media interviews all season, but said during UA’s preseason media day that he was struck by the competition and ability of players at his guard position.

“We’ve got a lot of really good guards,” Nowell said. “Definitely the first day I got here, just the physicality level, the speed of the game, was definitely elevated. But it’s just about a matter of adjusting to it each and every single day and just keep growing.”

Arizona's Bennedict Mathurin will have late brother on his mind, #domixworld on his feed at NBA Draft

Dominique Mathurin died in 2014 at age 15 after he was hit by a car while riding a bicycle, leaving the 12-year-old Benn without a navigator for the courts or  streets.

A 6-foot-3-inch guard from Portland, Lang has already played four seasons for the Zags.

On Thursday, Arizona could have three players taken in the first round of the NBA Draft for the first time ever.

A 5-foot-11 point guard from the class of 2024 for Liberty High School in Henderson, Nevada, Thomas drew the attention of UA coaches during Section 7 play at Glendale’s State Farm stadium last weekend. Monday, the Wildcats offered him a scholarship.

Could three Arizona players land in first round of tonight's NBA Draft? Sporting News thinks so

The Wildcats have had 75 NBA Draft picks, but never more than two in the first round.

Dalen Terry's decision to stay in the draft and leave Arizona after his sophomore season had paid off, with Terry slotted for a guaranteed two-year contract worth about $6 million.

Indiana picked him sixth in last week's drive after his impressive pre-draft workouts. 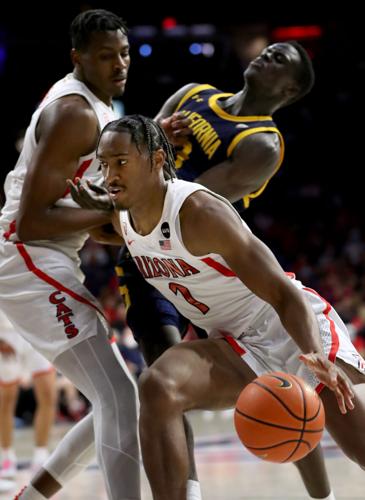 Arizona Wildcats guard Shane Nowell (1) heads to the basket via a screen from center Christian Koloko (35) on California Golden Bears forward Kuany Kuany (13) in the second half of their Pac 12 men's basketball game at McKale Center, Tucson, Ariz., March 5, 2022. 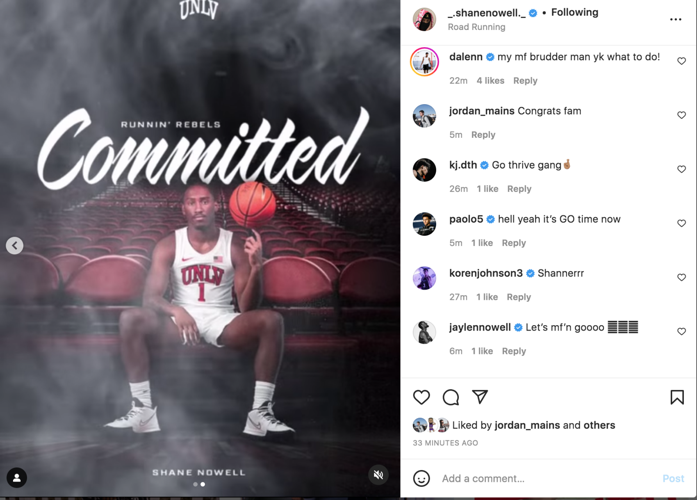 Shane Nowell is moving on to UNLV after a season with Arizona.