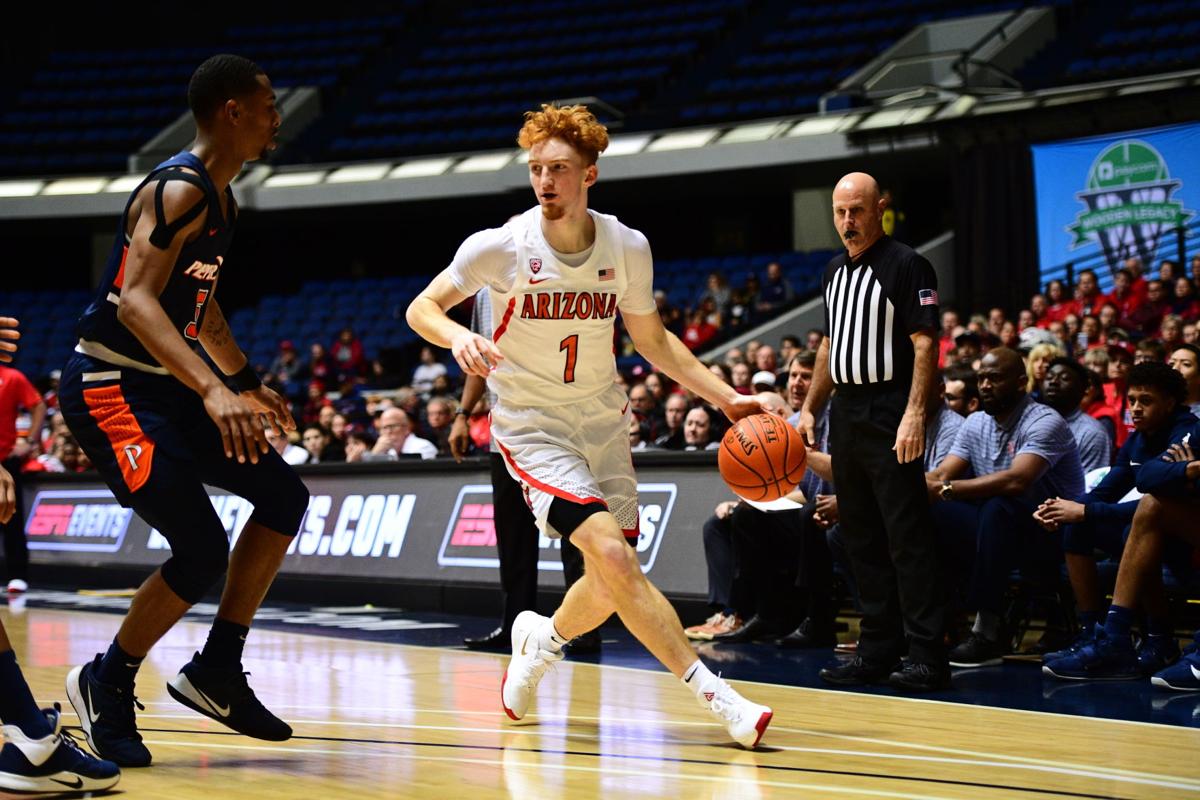 Nico Mannion dribbles around the Pepperdine defense in the first round of the Wooden Legacy, on Nov. 28, 2019 at Anaheim Arena. 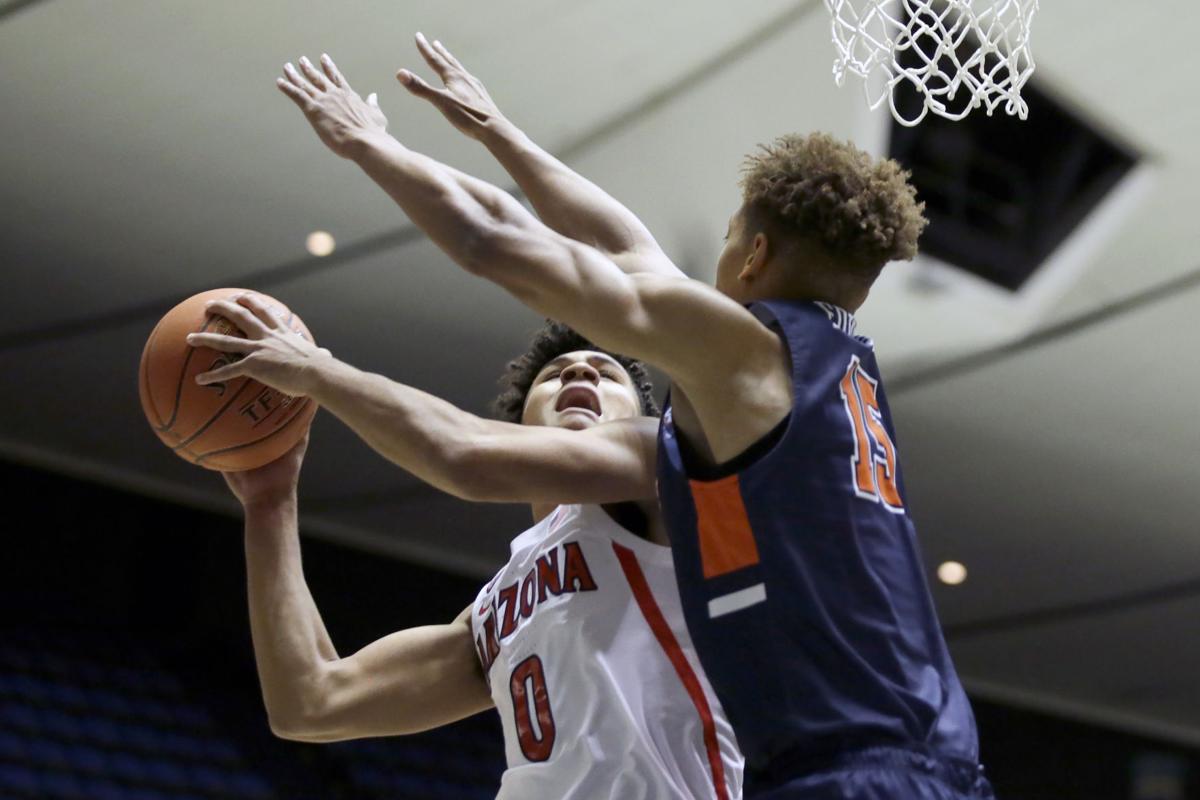 ANAHEIM, Calif. – Because just 1,574 fans showed up late Thursday at Anaheim Arena, the 52-year-old building was emanating the sort of energy you’d expect after a heavy Thanksgiving dinner.

That is, not a whole lot.

Before freshman Nico Mannion went coast-to-coast to hit a tricky, game-winning runner off the glass with two seconds left to give Arizona a 93-91 win over Pepperdine, the Wildcats were giving up 50.8% shooting, missing 10 of 24 free throws, committing 17 turnovers and allowing Pepperdine to score 18 second-chance points off nine offensive rebounds.

But they also created just enough energy to win the maddeningly close game, which featured 24 lead changes and 13 ties, not just from their unflappable freshman guard, but also in the form of vicious 3-point streaks from Josh Green and Dylan Smith.

Totaling a season-high 24 points, Green crammed in three 3-pointers over just 64 seconds midway through the second half while UA took leads of up to 12 points, while Smith threw down a trio of daggers within 1:59 late in the game.

The win moved Arizona to 7-0 and into a Wooden Legacy semifinal game Friday at 9:30 p.m. against Penn, which hung on to beat UCF 68-67 in an earlier first-round game Thursday.

In the final minute, Zeke Nnaji added a dunk to give UA a 91-89 lead and, after Pepperdine’s Colbey Ross tied it on a 10-foot pullup with seven seconds left, Mannion raced to the finish line.

Mannion took an inbounds pass from Nnaji, raced toward the right of the basket, then flipped it up with his right hand over two Pepperdine defenders, about eight feet away from the basket and just before he ran out of bounds.

The shot bounced high off the glass, with enough time for an offensive rebound if it missed, but somehow went in.

“He made a really difficult shot,” Miller said. “It wasn't a layup. That was kind of like a Magic Johnson old school hook in the Boston Garden. He just did it off the glass, really a heck of a shot. But he's poised for a freshmen, as you guys know.”

Yeah. Here was Mannion’s unflinching recollection of the play:

“I just looked at the clock and there were seven seconds,” he said. “I tried to go coast-to-coast and I knew I wasn't going to be able to get a layup because their big guy was kind of on my left side. So I kind of just floated it up and it ended up going in.”

For Pepperdine coach Lorenzo Romar, the Wildcats’ associate head coach during the 2017-18 season, it was the worst possible outcome. Just five seconds earlier, his star guard, Colbey Ross, hit what could have been a game-winner to cap his 20-point, nine-assist effort.

But he left nearly eight seconds on the clock after the shot went in, more than enough time for Mannion to race downcourt.

“We took a gamble,” Romar said. “What we didn't want to happen is we take the last shot and if we don't make the shot, the game's over. We have no way to try another shot. So we wanted to give it enough time to where if we missed, maybe we could foul and get the ball back again. But Nico hit a runner, a big-time shot.

"I thought it was pretty well defended. Nico’s just a really good player.”

So, earlier in the game, were Green and Smith. The Wildcats hit a season-high 13 3-pointers on 27 attempts, and the streaks from the two starting wings, in a way, determined the game as much if not more than Mannion’s shot did.

“I thought that that that gap is really what allowed us to win the game,” Miller said. “But I thought we were going to be able to hold steady on that gap. Did I think they were going to go away? No. But … I had more confidence in our ability to get a stop.”

They didn’t get many of those as it turned out. The 50.8% that Pepperdine shot from the field was the highest of any UA opponent so far, and the Waves’ 13 3-pointers (on just 27 tries) was four more than anyone had made against the Wildcats this season.

In what frustrated Miller perhaps more was the fact that the much-smaller Waves used offensive rebounding to effectively shoot even better than that. Pepperdine’s 14 second-chance points were five more than Arizona collected off its nine offensive rebounds.

“Tonight is another reminder that if you give team second shots, a lot of bad things happen,” Miller said. “Some of their best 3-point shots happened when they got more than one shot. They're not a big team but they're scrappy and they hustle. We ended up winning rebounding by three, but when you have the size advantage we had, that isn't good enough.”

Those second-chance opportunities, including an offensive rebound from Kessler Edwards that led to a 3-pointer from brother Kameron Edwards with 7:29 left, helped Pepperdine turn UA’s 12-point lead into a 79-79 tie with 5:41 to go.

“I mean, that's our vet,” Green said. “That was huge for us. It just shows how he experienced and composed he was on the court and nothing but respect for him.”

“It was great to see him make those shots; he’s paid his dues,” Miller said. “All three of them were just back breakers for Pepperdine.”

Miller said he was glad the UA could learn lessons Thursday and still win, and vowed to look into changing substitution patterns that might improve UA’s rebounding.

But he also suggested that the tepid atmosphere probably had something to do with the Wildcats’ problems in what was their first game away from their cozy and often much louder home arena.

“It’s different playing defense without your home crowd," he said. "Every coach will tell you that. I know it's not supposed to be that way, but the home crowd in college basketball is a big deal. And McKale's home crowd is an even bigger deal.”

Nico Mannion dribbles around the Pepperdine defense in the first round of the Wooden Legacy, on Nov. 28, 2019 at Anaheim Arena.