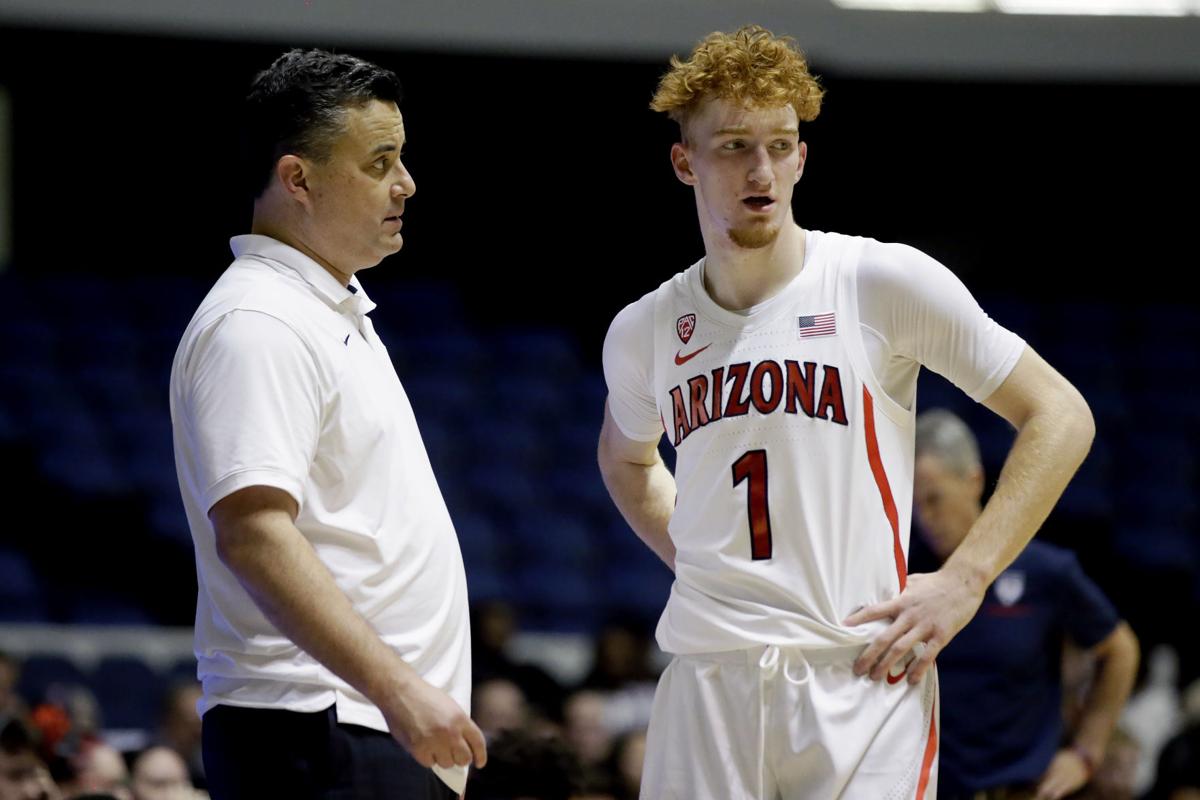 Arizona head coach Sean Miller, left, talks with guard Nico Mannion during a break in the second half of an NCAA college basketball game against Penn at the Wooden Legacy tournament in Anaheim, Calif., Friday, Nov. 29, 2019. (AP Photo/Alex Gallardo) 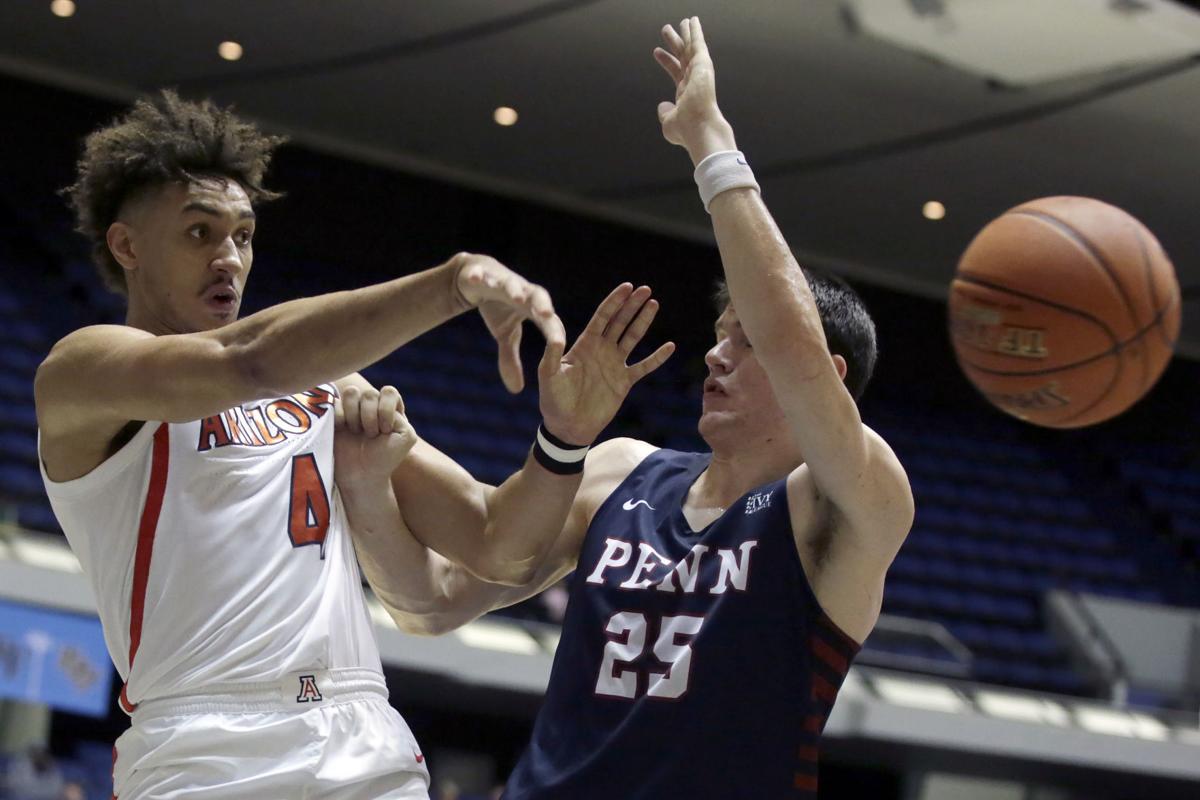 In Arizona’s 92-82 win over Penn in the semifinals of the Wooden Legacy on Friday at Anaheim Arena, the Wildcats’ ever-poised freshman put on an offensive clinic: He shot 11 for 14 from the field for a career-high 24 points, hitting most of his shots beyond 16 feet, a dazzling mixture of pull-up jumpers, step-backs, runners, floaters and layups.

Together with 8-of-9 shooting from center Chase Jeter and a 5-for-9 mark from Zeke Nnaji, the Wildcats shot 58.6 percent from the field and had all five starters score in double figures to make up for some significant defensive issues.

Shooting 45 percent for the game, Penn cut up the Arizona interior defense in the first half and then, with standout center AJ Brodeur limited by foul trouble in the second, exploded for 10 of 20 3s after halftime. Six of those second-half threes came from freshman Jordan Dingle, who went 7 for 14 from long range overall and was the game’s leading scorer with 27 points.

“Our defense is like peaks and valleys,” UA coach Sean Miller said. “Offensively, we’re getting smarter. We’re utilizing our strength, and that is our balance. We can beat you around the basket. We can beat you from the point guard position scoring, we can beat you in transition, and I think that in half court, we're starting to get better and better shots.”

More than anything Friday, the Wildcats beat the Quakers with Mannion. The Wildcats’ freshman guard, who hit an eight-foot runner as he raced out of bounds to give the Wildcats a 93-91 win over Pepperdine on Thursday, was all over the place on Friday, hitting floaters, runners, step-back and pullup jumpers, just about anything.

“Obviously Nico Mannion was spectacular on offense,” Miller said. “I mean, he had a couple stretches there where their defense is really at his mercy.”

Mannion did all that despite missing several minutes off the floor because Miller said his “back was tight,” while UA also lost backup forward Stone Gettings to a black eye; Miller said Gettings did not initially have concussion symptoms.

As usual, though, Mannion’s play said considerably more than his words did after the game.

“I was just trying to be aggressive, trying to make the right plays,” Mannion said of his shooting. “I hit a couple, started feeling good, but we were just playing well together. We were pushing the ball in transition and I think that's when we're at our best. I was getting good looks and we were all getting good look so it just made it that much easier.”

While Mannion put on a show from the perimeter, Chase Jeter also made it clear that defenses cannot focus on Zeke Nnaji alone. Jeter broke out with a season-high 19 points on 8-for-9 shooting, taking advantage of better looks afforded by defenses’ understandably increasing interest in stopping Nnaji.

“A lot of teams have been scouting and seeing what Zeke has been capable of,” Jeter said. “Today and last night teams were sending the double team and (teammates) have done a good job of finding me out of the out of the trap.”

Even Nnaji himself. Nnaji had 16 points on 5-for-9 field-goal shooting while also dishing three assists, and Miller said he has been “excellent” at passing out of double teams lately when those defenses collapse on him.

It is becoming a trend, with Nnaji serving basically as a magnet to pull defenders away from everybody else. Shooting 80.7 percent entering the Wooden Legacy this week, Nnaji has shot 11 for 17 over two Wooden games but also has intangibly increased his teammates’ scoring, too.

“Coming into the season, teams really didn't think Zeke was as good as he was in the post,” Mannion said. “After the first couple of games, they saw what he was capable of and they just started doubling him.

“Credit to him because he's just making the right plays, and when he does that, it just makes our team so much better because if you put if you play him one-on-one, he's a great post player and he'll likely get a bucket. But if you double him, he’s so good at passing out of the post and finding the right the right guys, it just makes it a lot easier for us on the perimeter. We swing it and get open shots.

Nnaji and Jeter’s production inside countered the Quakers’ ability to move the ball and score inside early, and the Wildcats’ inside advantage became even more pronounced in the second half with Brodeur in foul trouble.

Penn’s multiskiled big man, who had 10 assists to just one turnover in the game, uncharacteristically picked up his third and fourth fouls with 17 minutes remaining in the game.

“He’s very unusual player in that he is a post player who plays 35 to 40 minutes and doesn't fall out yet plays hard as heck,” Penn coach Steve Donahue said. “It’s disappointing that it ended up” that way.

Brodeur had just three points after halftime without taking a single field goal, with 11 points for the game, about seven points under his average.

“Usually when you're as skilled as Penn is, you're probably going to be missing something around the basket,” Miller said. “They really aren't because AJ Brodeur is just a very smart player. He can beat you with the pass. He can drive it. He can score around the basket and in the first half we did OK against him.

“Thank goodness he got in foul trouble early in the second half. That really influenced the game.”

With Brodeur limited Penn instead leaned on Dingle, who hit 6 of 11 3s in the second half to help the Quakers stay in the game.

UA led by up to 17 points in the second half but the Quakers cut it to just 82-78 with three minutes left after Dingle hit two 3-pointers in less than a minute and Brodeur made two free throws. But Mannion hit a step-back jumper off Dylan Smith’s offensive rebound to give UA an 84-78 lead with 2:29 to go and the Wildcats stayed ahead by at least two possessions the rest of the way.

In the first half, the Wildcats’ balanced offense shot 55.2 while UA took a 41-33 halftime lead.

The Quakers shot just 36.7% in the first half but kept in the game while turning the ball over only four times and recording assists on nine of their 11 baskets before halftime. After UA built leads of up to 10 points earlier in the half, Penn came back to take a brief 31-30 lead with 2:29 left.

“We're further along on offense than we are on defense,” Miller said. “We can score and we’re efficient, and I think we can even get better on offense. We have a lot of different ways to be able to beat you. But how much we improve on defense is going to is going to be a big, big factor in our overall success.”

The Arizona Wildcats womens basketball team hosted the UC Riverside Highlanders in a Friday afternoon game at the McKale Center, on Nov. 29, 2…

Arizona head coach Sean Miller, left, talks with guard Nico Mannion during a break in the second half of an NCAA college basketball game against Penn at the Wooden Legacy tournament in Anaheim, Calif., Friday, Nov. 29, 2019. (AP Photo/Alex Gallardo)