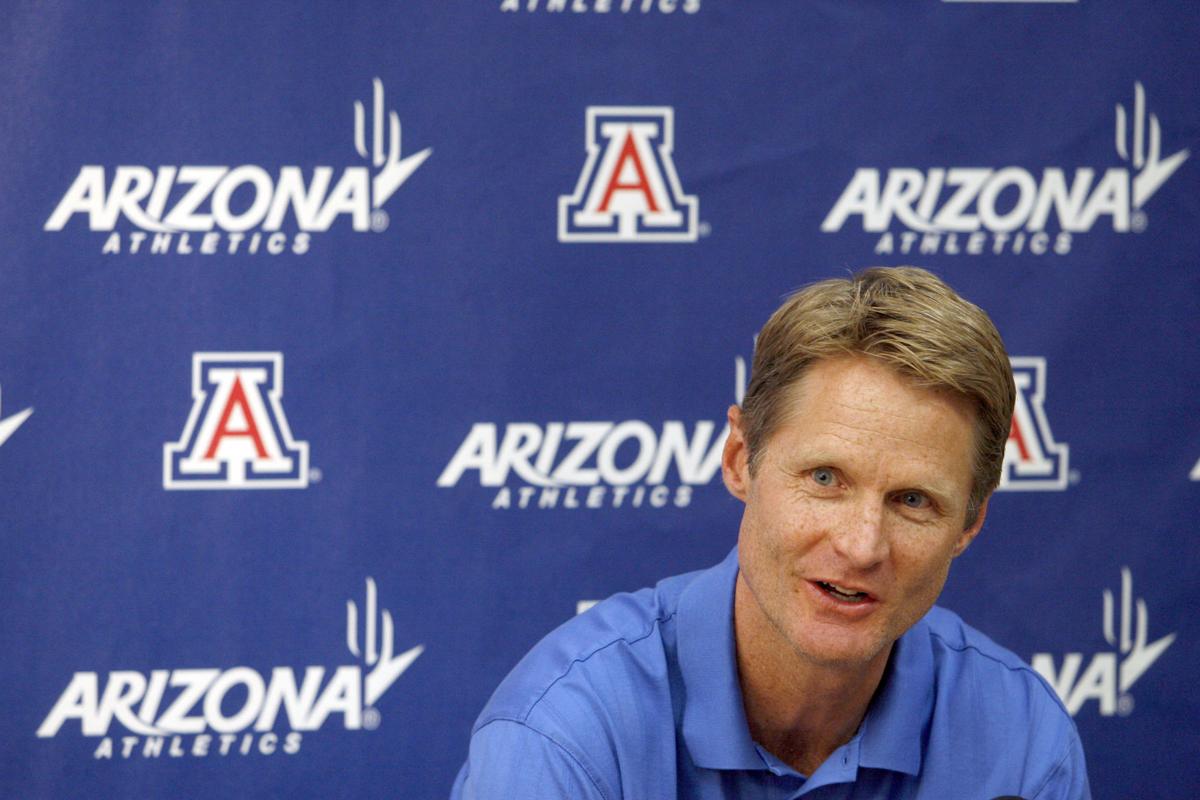 Steve Kerr says his decision to donate money from gear sales to the Lute Olson statue project was ‘a natural fit.’ 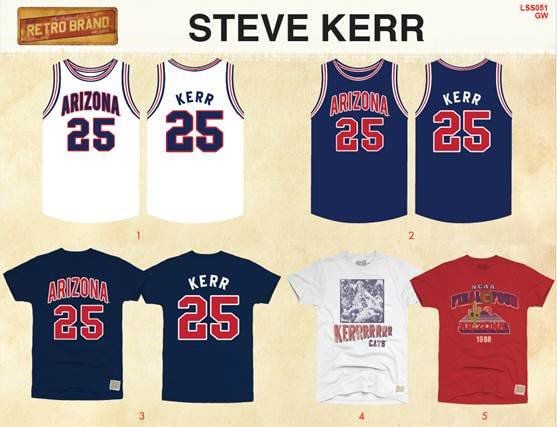 Steve Kerr jerseys and T-shirts will be sold starting Thursday, with proceeds to help pay for the planned Lute Olson statue outside McKale Center. 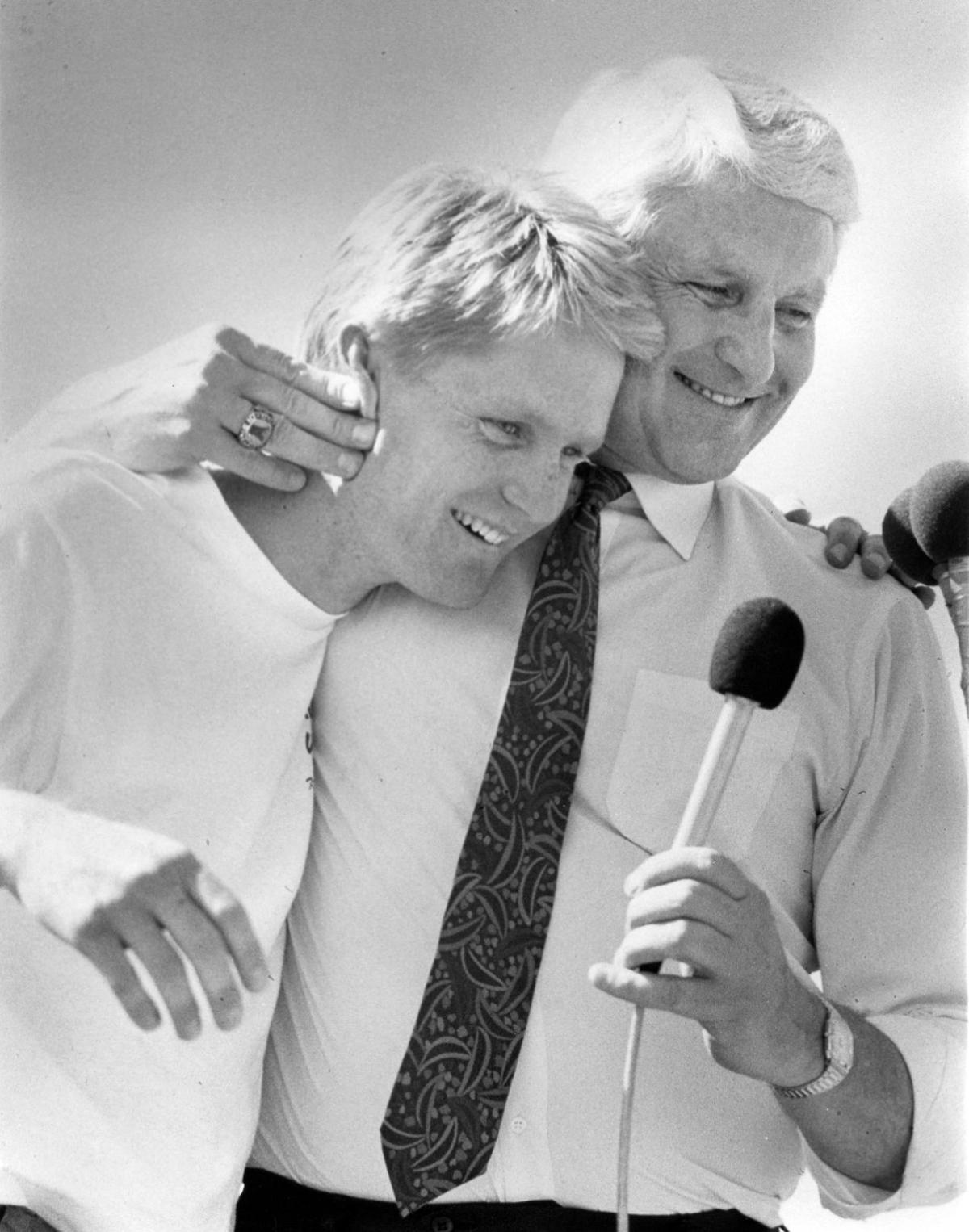 Just when Arizona approached him for help with a planned Lute Olson statue a few weeks ago, Warriors coach Steve Kerr said he was asked about marketing replicas of his 1980s-era Arizona jerseys and T-shirts.

He put those two ideas together.

“It was kind of a natural fit, just to donate the proceeds to the funding of the statue,” Kerr said by telephone Tuesday night. “I have no idea how many jerseys will be sold. I’m just making a contribution and hopefully … when you get a whole lot of people who care about Lute and the school, it’s amazing how fast you can raise money when people throw in 20 bucks, 50 bucks. It can happen quickly.”

UA says it plans to pay for a small portion of the $300,000 project with proceeds donated by Kerr and the merchant selling the replicas, while the school is also seeking private donations. (Arizona's news release specifies all the avenues through which the replicas will be sold).

Kerr said the statue was a “fitting tribute” to a legendary coach he has remained close to since leaving Arizona almost three decades ago.

Kerr said they usually see each other while vacationing in the San Diego area during the summer, but didn’t manage to do so this summer.

“He came out to the playoff games in the spring and that’s the last time we’ve seen each other,” Kerr said. “We check in periodically.”

Of course, Kerr doesn’t have much of a “summer.” That’s what happens when your NBA team keeps playing in the NBA finals every year. But Kerr managed to chill out a bit.

“It’s a good problem to have when you don’t have a long summer,” Kerr said. “I’ve had a period in San Diego, spent quite a lot of time at the beach. I’m going to New York to watch the US Open in a couple of days.”

While Kerr returned from his lingering back-related health issues to coach the Warriors in the finals, he said he didn’t want to discuss his health publicly. (He told the San Francisco Chronicle earlier this month that there's still improvement to make).

On the court, of course, Kerr still has plenty to be optimistic about after the Warriors won their second NBA title in three seasons last June.

“We’re in the midst of an incredible run,” Kerr said. “We have great playes, great guys who are all committed to the team and we’re in a city that loves basketball. We’re well aware that this is special and are trying to do the best we can.”

Little jumped up after a strong summer that ended abruptly in Las Vegas last month.

Rivals analyst Eric Bossi says ranking O'Neal is difficult partly because of the need to block out who his father is.

Arizona is sending out some gear to Harvey victims.

The Canadian forward says he will make a decision by November.

Steve Kerr says his decision to donate money from gear sales to the Lute Olson statue project was ‘a natural fit.’

Steve Kerr jerseys and T-shirts will be sold starting Thursday, with proceeds to help pay for the planned Lute Olson statue outside McKale Center.