LAS VEGAS — Running into their first extended bout with adversity this season, the Arizona Wildcats survived.

It just took an extra five minutes to do it.

In a 82-78 overtime win over Wichita State in a Main Event game Friday at T-Mobile Arena, Arizona gave away a 16-point second half lead but made up for it by keeping the Shockers scoreless for the first three and a half minutes of overtime. Then UA hung on near the end of overtime when Wichita State cut the game to a single possession again.

It was the sort of rocky experience UA coach Tommy Lloyd had said he expected the Wildcats would be heading into, so he was not surprised to see it actually happen in just their fourth game of the season.

"One hundred percent," Lloyd said. "High-level basketball is not always a thing of beauty. It can be a rock fight, and that's exactly what it was today. They're scrappy and (we had) 22 turnovers and we've got to tighten up our fundamentals.

"But in a game situation, you don't have time to do breakdown drills. You've got to get on to the next play and respond. And I thought our guys did an awesome job of responding to a lot of difficult situations."

Arizona began overtime with a 9-0 run, getting a score inside from Christian Koloko, a free throw from Mathurin and a 3-pointer from Kerr Kriisa to take a 75-69 lead after just 47 seconds. They extended it to 79 with two free throws from Kriisa and one from Tubelis.

Wichita State missed its first eight shots in overtime before Tyson Etienne hit a corner 3 from the left side to make it 78-72 with 1:31 remaining.

The Shockers then made it interesting again at the end of overtime. After Kriisa missed a pair of free throws that left the game at 80-75 with 19 seconds left, Qua Grant hit a second-chance 3 with three seconds left.

Justin Kier then drew a foul immediately upon the Wildcats' inbound and hit both free throws to make it 82-78 with 2.1 seconds left to put the game away.

Etienne had just three points on 1 for 7 shooting in the first half after missing Wichita State’s previous game on Tuesday with an unspecified illness before he took off in the second half and finished with 27 points.

As Lloyd said afterward, Etienne said it was a learning experience.

"We needed this," Etienne said. "We're gonna learn from this and we're gonna be great. Arizona's gonna be an NCAA Tournament team. But we never folded."

Bennedict Mathurin led Arizona with 25 points and 10 rebounds while Koloko had a double-double of 13 points and 11 rebounds and Azuolas Tubelis had 16 points. Kriisa had 12 points, four rebounds and six assists.

Koloko also had four blocks to total 16 over four games so far. He's the first Wildcat to have four blocks and a double-double twice in a season since Jordan Hill did it in 2008-09.

Arizona shot 40.7% for the game while keeping Wichita State to just 33.8% but the Wildcats ultimately won the game by getting to the line. UA hit 29 of 42 free throws (69.0) while the Shockers made just 12 of 24 and particularly kept themselves from winning the game by hitting just 6 of 15 in the second half.

Wichita State coach Isaac Brown said the Shockers were picking up fouls while trying to box out, which he said not only helped UA get to the line more often but also forced the Shockers to play smaller when their bigs hit foul trouble.

"I get it if you're getting beat off the dribble and you're fouling," Brown said. "We weren't allowed to box out, which put them in a bonus early and we had a lot of guys on the bench."

The win moved the Wildcats into a Main Event championship game against No. 4 Michigan, to be played at 7:30 p.m. Sunday and carried on ESPN. Wichita State dropped to 3-1 and will face UNLV on Sunday at 10 p.m.

Up 40-33 at halftime of regulation, Arizona took leads of up to 16 points in the second half before running into trouble. The Wildcats shot 41.4% overall and kept Wichita State to 34.2% shooting.

The Wildcats missed their first 14 3-pointers of the second half while Wichita State turned around its poor shooting and went on a 13-0 and 16-2 runs to cut the Wildcats’ lead to just a point, 56-55, when Etienne hit a 3-pointer with 8:46 left.

Lloyd said he considered calling a timeout to stop the bleeding, and second-guessed himself for not doing so, but said he wanted the Wildcats to work through it.

"We lost the flow of our offense a little bit, there's no doubt about it," Lloyd said. "I don't know if we got tired, or their pressure was kind of amped up but a few of the things they were doing kind of slowed us down.

"But that's part of it. It's just about gaining game experience and playing together."

While a 3 from Kriisa helped UA go back ahead 63-55 with 6:27 left in the second half, adversity kept hitting. The Shockers pulled within 63-59 entering the final media timeout with 3:54 left. Qua Grant hit a 3-pointer to tie it at 54 with 2:10 left and then Wichita State's Kenny Pohto blocked a shot from Koloko.

With 58 seconds left and Wichita State up 65-64, Dalen Terry drew a foul and hit both ensuing free throws to give UA the lead back, 66-65. But Etienne drew Terry’s fifth foul on a 3-point attempt with 37.1 seconds to go.

But Etienne missed his final two of the three free throws, putting the game in a 66-66 tie before Azuolas Tubelis pulled off a three-point play with 21 second left. A twisting 3 from Etienne with 17 seconds left tied it again at 69.

Arizona had a final chance to win the game in regulation, but Justin Kier missed a layup with 10 seconds left and Etienne eventually pulled the defensive rebound away to prevent the Wildcats a second chance at the basket.

But the Wildcats managed to find themselves again after regulation.

"We knew we had to stay poised and I think we did a good job starting overtime," Koloko said.

The game was something of a prize fight for sophomore guard Pelle Larsson, who took a shot to his face during a Wichita State possession in the second half after surviving two scary incidents in the first half.

Larsson appeared to be poked in the eye as he defended a Wichita inbounds pass, and went to the bench, but he had it even worse in the first half.

In the first half, Larsson fell to the floor under the basket – and the 7-foot, 260-pound Ballo fell on his right leg. Larsson grabbed the knee in pain and briefly stayed on the ground but continued to play.

Later in the first half, Larsson’s head ran into Kriisa's shoulder under the basket and again Larsson stayed on the floor, with blood having to be cleaned off the area where he fell afterward.

Larsson had been playing more in the both halves after Terry picked up two quick fouls at the start of each half.

Overall in the first half, Mathurin had 17 points and Arizona held Wichita State to 37.1% shooting while the Wildcats took a 40-33 halftime lead.

Tubelis added nine points and Kriisa had four assists for Arizona, which shot 56.0% and had a characteristic 10 assists on its 14 made field goals.

Wichita State hit just 4 of 15 3-point shots in the first half and was shooting about 30% overall through the first 15 minutes of the game, when the Wildcats took leads of up to 14 points.

But after Mathurin hit a 3-pointer to give UA a 34-20 lead with 5:09 to go, Wichita State then pulled off an 8-0 run to cut it to 34-28, getting two shots inside from reserve forward Monzy Jackson and a second-chance jumper by Kenny Pohto, whose first attempt was blocked by Tubelis.

It was the Wildcats' first sign of trouble, with more to come in the second half.

But it's only November. The Wildcats have time to learn from it all. Their 22 turnovers, their 13 missed free throws, maybe even their failure to significantly outrebound a smaller team by more than 47-43 total were all enshrined in video that can be reviewed in the days and weeks ahead.

The Star's Bruce Pascoe breaks down the starting lineups, storylines and stats as the Arizona Wildcats prepare to take on Wichita State in Las Vegas.

For Arizona Wildcats, the real season tips off this weekend in Las Vegas

Arizona (3-0) will play Wichita State and either UNLV or No. 4 Michigan in the Las Vegas Main Event.

Despite all that scoring, defense made Arizona Wildcats stand out over first three games

Here are five reasons behind why the Wildcats have been so dominant defensively:

UA has officially been requiring fans to enter McKale with a mask on and to wear them at all times except when eating or drinking.

It’s a new world for college basketball coaches this season, with many staffs adopting the casual look they turned to last season, when empty stands and canned music changed the atmosphere inside arenas at the height of the pandemic. 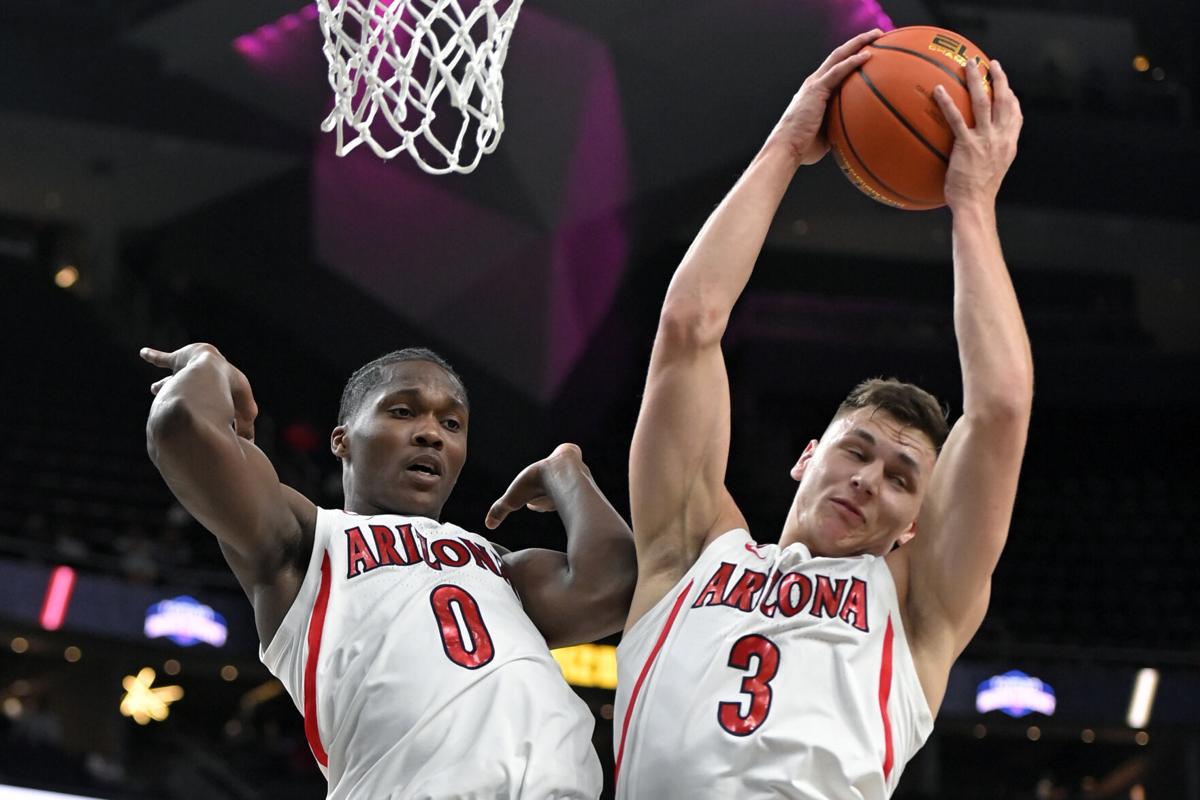 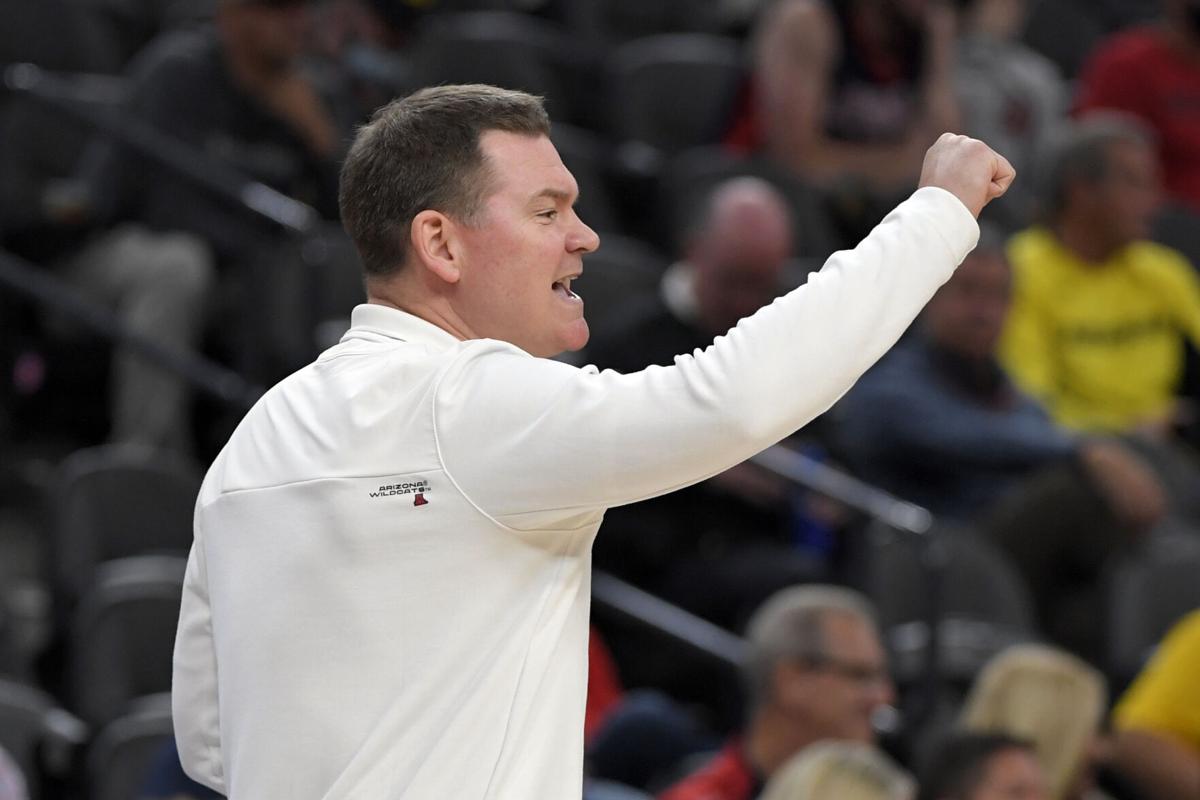 Arizon coach Tommy Lloyd calls to the team during the first half of Friday's game against Wichita State.