From the moment Sam Thomas stepped onto the UA campus four years ago, she’s been a leader.

She has always done whatever is needed — and with a smile on her face.

Play any position on the court? No problem.

Play tenacious defense? You got it.

Always bring a consistent level of competitiveness? For sure.

This year, however, the fifth-year senior is being asked to do something a little different: Be the face of a Wildcats team looking to return to the Final Four.

“I think Coach Adia (Barnes) has prepared me pretty well — I mean we’ve had a lot of time to prepare. I’ve been here going on five years,” Thomas said with a laugh.

Thomas says Barnes taught her “the little things” early in her career before “passing me the torch” following McDonald’s departure for the WNBA.

Barnes credits Thomas for putting in the work.

“Sam prepared herself,” she said. “She’s been slowly getting better at different things. And I think she has more of a voice now — a lot of that comes from confidence, comes from experience —and I think she’s just raised her own standards of herself and her teammates. … She’s grown into her own self. She’s becoming the best version of herself, and I love to see it because she’s completely different than when she came.”

Thomas played for a Las Vegas Centennial High School program that rarely lost. Arizona was an adjustment, to say the least.

The rebuilding Wildcats lost 24 games her freshman year, finishing 11th in the Pac-12. Thomas, a captain as a freshman, consistently — and confidently — answered questions after every setback.

Even then, she was a leader. Four years later, there may not be a more recognizable student on campus.

“Every mother, father — everybody — wants Sam to be their daughter … because of who she is and how she plays basketball and everything she does outside of basketball,” senior guard Bendu Yeaney said. “She’s the perfect leader, on and off the court. She’s a perfect example of our program. Little girls want to be like Sam, and I think that’s a great thing.”

Each year, Thomas has done things outside of basketball to build that confidence. She has been co-president of the student-athlete advisory committee, a member of the UA’s peer athletic leadership group and member of the mental health support group. She spent a summer interning for Nike’s Global Running Brand Marketing Team.

And last month, Thomas was the lone student-athlete to take part on a UA panel about name, image and likeness in Washington D.C.

“I don’t think there is a better representative of our athletic department than Sam Thomas,” Barnes said. “In my opinion, Sam should be Woman of the Year, which I think she will be. When I see her in different areas like that, there’s always a confidence that I know she’s going to represent us really well.

“I am very proud that she’s part of our team. She’s every coach’s dream. You want someone who will represent off the court and on the court in a great manner. She does everything we ask, but what I love is that she’s able to do that now — the confidence and that great voice. As a freshman, that would have been a lot harder. It’s good to see the growth every single year and it’s been fun to be a part of that.”

“When your head coach has a great deal of confidence and belief in you, it really helps you as a player achieve things that maybe you weren’t sure you could do,” said Joan Bonvicini, a former UA coach who is now a Pac-12 Networks analyst. “But I think now, Sam does.”

Now that it’s Thomas’ team, she’s taken her leadership skills up a notch. Often, that means having difficult conversations with teammates to make sure they’re working hard — and working together.

Little by little she’s learning who responds to vocal criticism — and who doesn’t.

Spanish freshman Gisela Sanchez is in the latter category. Sanchez is still perfecting her English, and there are times in practice where she can feel overwhelmed. Thomas pulls her to the side and calms her down.

Then, “it’s like a whole new person and she’s 10 times better,” Thomas said.

It’s part of what makes Thomas the right person to lead the Wildcats in their first season without McDonald. The UA has been picked to finish fifth in the Pac-12 and is ranked No. 22 in Associated Press’ first poll of the season. Internally, the Wildcats expect to surpass both projections.

“She’s consistent, she’s reliable, she’s coachable, she’s humble, hungry — and she is a connector, and everybody likes her,” Barnes said. “When you respect someone, you like someone, you know they care, you listen to them. I think she could say hard stuff because people know she’s coming from a good place and that’s easy from relationships.”

“She’s talented, but she obviously didn’t need to be the center of attention last year with Aari and would do whatever she needed for her team to win. She scores, she plays defense,” VanDerveer said. “The fact that she wanted to be back … We have super seniors, too, with Anna Wilson and Alyssa Jerome. They want to be in your program. They get it. They can help other people. They know the sacrifices you have to make. I think that Adia is really fortunate that Sam came back, and Sam is really fortunate that she got the opportunity.

In order of predicted finish by Star contributor PJ Brown:

'They all came here because they want to win': UA hopes 3 transfers can make a difference

During a three-week span in April, UA coach Adia Barnes reeled in a top-rated transfer class. Here's how players from Vanderbilt, Oregon and Alabama could help the Wildcats return to the Final Four.

Under first-year coach Tommy Lloyd, Arizona Wildcats aim to run with a purpose

The only thing we know for sure is that that Tommy Lloyd's Wildcats will be faster. Maybe much faster.

The Wildcats are picked to finish tied for fourth in our team-by-team breakdown.

“I think our roles have really changed compared to last year,” Mathurin said. “Me and Azuolas took on the role of being leaders on this team and our coach brought the mentality of winning."

Breaking down the 'Conference of Transfers,' from A to Z

The league loaded up in the offseason, and not by dipping into the youthful waters of high school recruiting.

Thursday night's exhibition game against Eastern New Mexico will give the coach a chance to experiment with lineups and looks. Here's what to know:

The Star talked to UA players about legendary coach Lute Olson’s life and what talking to ex-Wildcats meant to them:

Sam Thomas and Cate Reese were All-Pac-12 selections during the 2021 season.

First-year radio broadcaster Brody Dryden will be on the call for his second exhibition game on Friday, when the Wildcats host Arizona Christian at 6:30 p.m.

The two freshmen made a statement in Friday night's 110-39 exhibition win over Arizona Christian.

PJ Brown attended her first UA women's basketball game in January 2016. The Wildcats, who open their 2021-22 regular season on Tuesday against Cal State Northridge, have come a long way since. 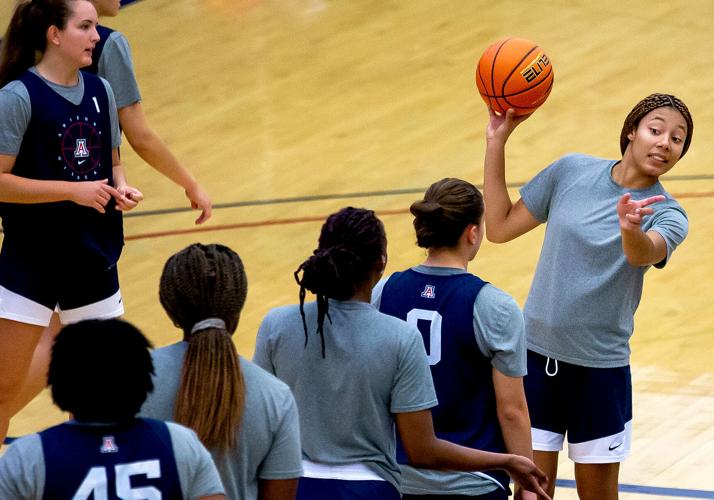 Arizona forward Sam Thomas, right, communities with her teammates before running a play during practice earlier this month. The fifth-year senior is the unquestioned leader on a team looking to return to the Final Four. 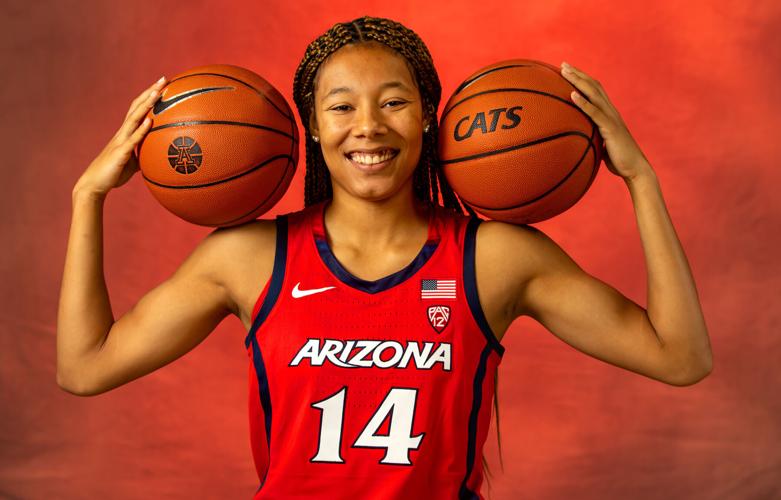 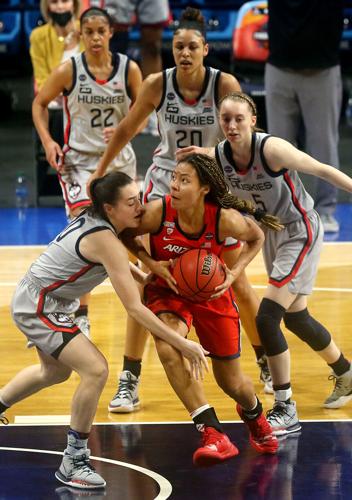 After grabbing the rebound, Arizona forward Sam Thomas drives to the basket while surrounded by UConn defenders during last year’s Final Four game.