What: Maui Invitational first round

Arizona is 3-0 against Cincinnati but hasn’t faced the Bearcats since Miles Simon hit a three-quarter-court buzzer-beater to lift the Wildcats to a 79-76 win in Phoenix on Feb. 11, 1996.

Despite returning six of its seven top scorers from last season, the Bearcats have had some trouble, well, scoring. Cincinnati scored just 11 points on 4-for-25 shooting in the second half of a 64-51 loss Wednesday at Northern Kentucky, which foiled the Bearcats with a matchup zone defense.

Cincinnati is shooting just 46.5% from two-point range and only 26.5% from 3-point range. However, the Bearcats make up for it somewhat by scooping up 38.3% of their misses, the 20th-highest offensive rebounding percentage in Division I.

The Bearcats, who will leave the AAC for the Big 12 next season, were in the running for an NCAA Tournament berth entering the stretch run last season but lost nine of their final 12 games. So far this season, they beat Chaminade, Cleveland State and Eastern Kentucky at home before losing at Northern Kentucky.

“I think early on in the year everyone’s still trying to find themselves both offensively and defensively. But Northern Kentucky played really, really well in that game and it was at Northern Kentucky. It was a great environment.

“They’re coming off a tough loss, but they’re one of the most experienced teams in the country. They have top 25 in terms of experience. They have three guys that can really score the basketball (DeJulius, Landers and Davenport.) Between those three guys, any one of them can go off for 20 points in a game so you have to know where they are … You have to be ready to come out and defend them, rebound the basketball and take care of the ball offensively.

“Landers Nolley is an elite-level scorer. Lakin is instrumental in their rebounding. Defensively, they’re a man team and they’re going to try to press. They’re aggressive and try to create turnovers, get out in the passing lanes. It’s a great test for us early and part of a big-time tournament.” — UA associate head coach Jack Murphy, who scouted the Bearcats.

The Bearcats’ top scorer last season, DeJulius picked up the first AAC Player of the Week honor this season after averaging 21.3 points on 78% shooting during Cincinnati’s first three victories. He’s a 44.4% shooter overall who has hit half of his 12 3-pointers and records a steal on 3.5% of opponents’ possessions when he’s on the floor.

The Wildcats get their experienced combo guard back just in time. Ramey has been expected to start in the backcourt alongside Kerr Kriisa, giving the Wildcats an experienced player on or off the ball — and a top-shelf perimeter defender.

Of all the stats Murphy studied in preparation for the scouting assignment against Cincinnati, this was one of the biggest: Nine teams in the Associated Press Top 25 had suffered losses this week entering Sunday, and two of them came to teams that were coming off losses themselves. Michigan also lost to ASU, which had earlier lost to Texas Southern.

“You can go on down the line,” Murphy said.

All the way to Cincinnati, which is 3-1 after a loss to Northern Kentucky on Wednesday and now facing Arizona?

Bearcats coach Wes Miller didn’t want to tackle that one.

“I don’t know,” Miller said. “I’ve never looked at it the way you guys look at it. I always just think about it as today. The fact of the matter is we didn’t play well our first time together on the road Wednesday and we’ve got to continue to play better.

“We know what we’re up against. If you’re watching tape of Tommy’s team, I’m just blown away. I almost think they’re underrated to where they’re ranked. I can’t imagine that there’s five teams in college basketball that are better than Arizona right now.”

A ‘different level of fast’

Kenpom’s adjusted tempo ratings now have UA at the No. 1 spot but Miller apparently didn’t need to see that number. He just used his own eyes.

“Their pace of play is absolutely off the charts,” Miller said. “Before I looked at any statistics, I watched the (Southern) game (a 95-78 UA win on Nov. 11). I always like to watch a game without any information first and see what I just see naturally. And I’m going, man, there’s no way they play that fast every night. …. (but) you’ve seen it consistently possession after possession with this year’s team.

“I think at Gonzaga, coach (Mark) Few and Tommy always played fast. But I think they’re playing a different level of fast with this team at Arizona.”

Not only will the Wildcats have to start playing Monday at 9:30 p.m. Arizona time but the clock will turn midnight before the end of the first half on the bodies of Eastern Time Zone-based Cincinnati players.

The Bearcats arrived in Maui on Saturday, giving them only minimal time to adjust to the five-hour difference. But Miller said he didn’t have any idea if it would hurt or not, and Lloyd said he did not expect an advantage.

“I’m sure there’s data that shows it both ways,” Lloyd said. “At the end of the day, this is what I know about kids: They’re pretty adaptable. And these kids like staying up late, so I don’t think 9 p.m. or 11 p.m. is a big difference.”

26.3 — Arizona’s average assists per game, the highest in Division I

1,063 — Dollars for an all-tournament ticket to watch all 12 of the Maui Invitational games.

Arizona Wildcats remain at No. 14 in Associated Press Top 25 poll

Arizona remained at No. 14 in the Associated Press Top 25 poll Monday after beating Utah Tech last week but otherwise preparing for the Maui I…

Batcho said after Monday’s game that he was not sick at Arizona, only injured. Whatever the case, he never played a single game for the Wildcats.

Hear what Jedd Fisch said as the Arizona Wildcats prepare to take on Arizona State in the season finale for the Territorial Cup.

Courtney Ramey had 17 points in his UA debut. 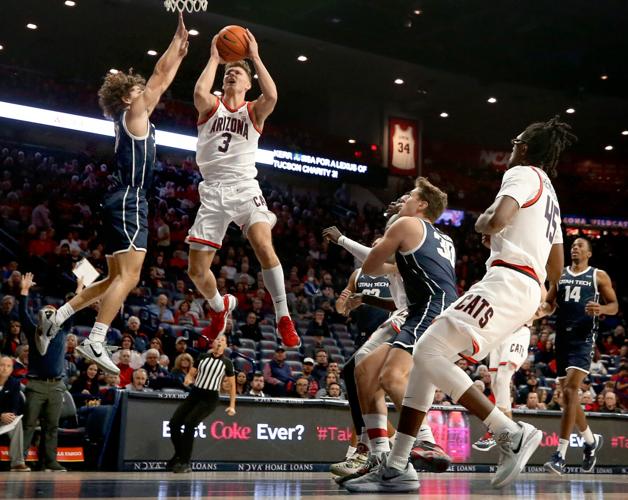 Arizona's Pelle Larsson (3) sails to the basket by Utah Tech's Noa Gonsalves (11) in the first half of their basketball game at McKale Center, Tucson, Ariz., November 17, 2022. 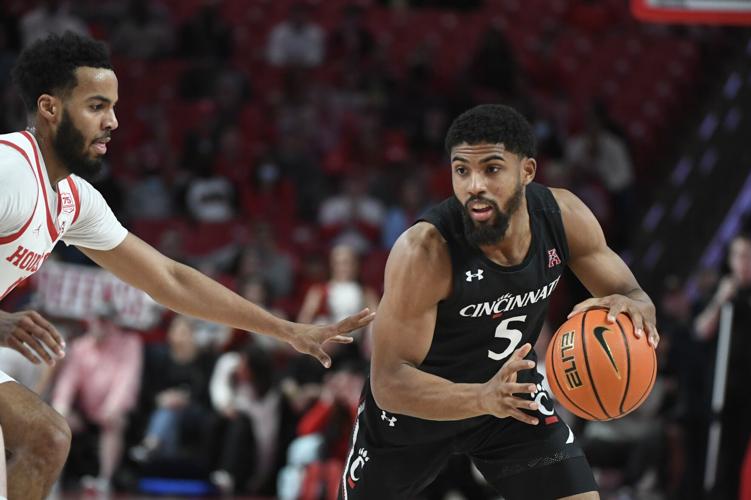 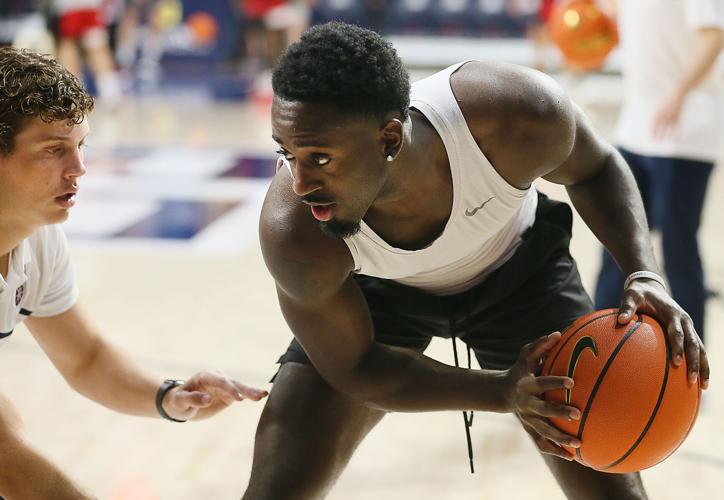 Arizona Wildcats guard Courtney Ramey (0) warms up with an assistant before the season opener game against Nicholls State at McKale Center in Tucson, Ariz. on November 7, 2022.