HOW THEY MATCH UP

Creighton overview: Two years after taking Creighton to the Sweet 16, 13th-year coach Greg McDermott appears to have an even better team now. The Bluejays, who edged San Diego State in overtime in the first round of the NCAA Tournament last season, are now running the ninth-most efficient offense in Division I.

The Bluejays are averaging 37.8% shooting from 3-point range and 61.6% from two-point range, the eighth-highest mark in Division I. On Tuesday in a 90-87 Maui Invitational semifinal win over Arkansas, the Bluejays hit 7 of 14 3-pointers while point guard Ryan Nembhard went to the free throw line 12 times and hit 10 free throws.

Creighton has scoring threats all over the court, but Nembhard is the one who connects them all seamlessly with steadiness and a high basketball IQ. The brother of former Gonzaga standout Andrew Nembhard, Ryan was named the Big East’s Freshman of the Year last season and has just four turnovers to his 29 assists so far this season.

After scoring 30 points against Cincinnati and then dropping 14 in the first half against San Diego State, Tubelis went scoreless in the second half Tuesday. The Wildcats need Tubelis to stay aggressive against Kalbrenner and Arthur Kaluma.

Instead of holding its championship game at the end of the final day of the Maui Invitational, the event now places the game at noon Hawaiian time, so as to allow broadcast to the Eastern Time Zone at 5 p.m. The seventh-place and third-place games then follow.

That means a brutally quick turnaround time for the two teams in the championship game, because they have to play on Tuesday nights just to get there.

But Arizona coach Tommy Lloyd has been through this before thanks to none other than …. Arizona.

When Lloyd was an assistant at Gonzaga in 2018-19, the Zags beat the Wildcats 91-74 in the semifinals and then skidded into the Lahaina Civic Center for an afternoon matchup with Duke the next day.

“We had a battle against Arizona, and the Zags came out on top,” Lloyd said. “The gift was you got to play Zion (Williamson) and RJ (Barrett) and Duke at noon. So that's just what it is. You know that coming in a Maui, and trust me, we know what's at stake.”

While Arizona continues to wait for possible sanctions resulting from the 2017 federal investigation and other alleged violations, the Bluejays have already settled up.

Also with an assistant coach found taking money from aspiring agent Christian Dawkins as part of the federal probe that led to NCAA investigations – even though Dawkins testified that he did not keep it – the Bluejays were mostly slapped with recruiting penalties while the assistant, Preston Murphy, was handed a two-year show cause order that effectively keeps him from coaching college basketball during that time.

Former Arizona assistant coach Book Richardson served a three-month federal prison stint after admitting he took $25,000 from Dawkins, while the Wildcats also face Level I charges for academic misconduct and for former assistant coach Mark Phelps allegedly trying to cover up a loan he gave a player.

While Creighton’s case went through the standard NCAA penalty track, Arizona requested its case be moved to the IARP. It was accepted into the IARP in December 2020 but remains pending.

Batcho on a roll

While former UA forward Daniel Batcho of Texas Tech won’t get a chance to play against his former teammates, he is making the best of his appearance in Maui.

The forward from France scored 17 points in Texas Tech’s first-round loss to Creighton on Monday, then had 12 rebounds in the Red Raiders’ 70-38 drubbing of Louisville on Tuesday.

“He's been the most consistent player, especially on defense,” Texas Tech coach Mark Adams said. “But he's been scoring a lot, in double figures offensively. We always can count on him getting two or three blocks and then adjusting some of those shots as well, not just blocking 'em.

“He's a great rim protector and he's kind of the cornerstone of our defense. Actually, though, I wish we could get him more touches on the offensive end because he's doing much better. We’ve got to find other ways to get him the ball.”

4: Seasons since San Diego State gave up as many as the 87 points that Arizona scored on Tuesday against the Aztecs. Boise State scored 88 on Jan. 5, 2019.

15: Years since any Division I team averaged 100 points and shot over 60% from the floor over their first four games until Arizona did it this season.

27: Times Arizona has shot 50% or better during the 42 games of the Tommy Lloyd era so far.

Cats cap Maui Invitational with a mahalo — and a Thanksgiving meal

Tommy Lloyd invited all his staffers to bring along their families. Several players also have relatives tagging along.

Ballo was named Maui Invitational, while Azuolas Tubelis and Daniel Batcho made the all-tournament team. 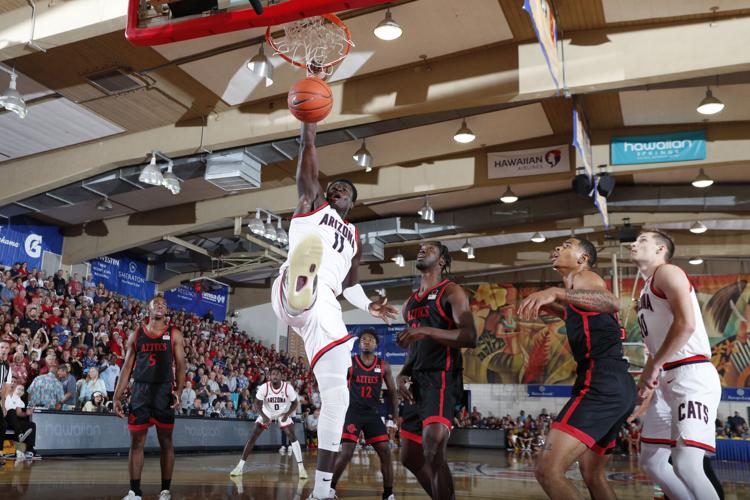 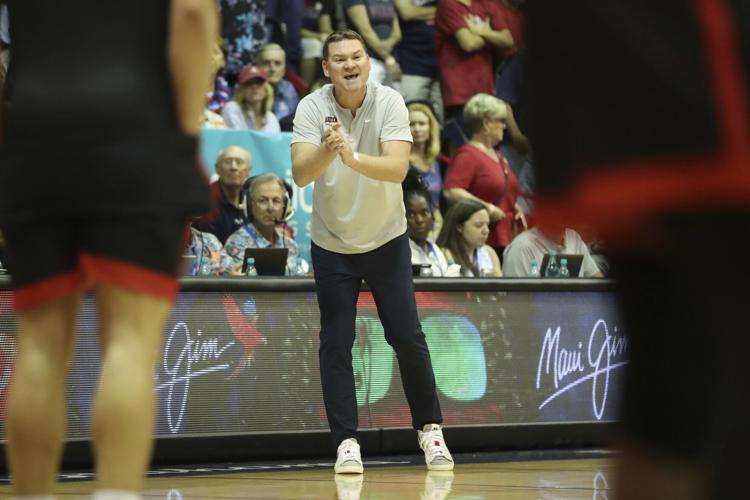 Arizona head coach Tommy Lloyd barks orders at his team as they take on San Diego State during the first half of an NCAA college basketball game, Tuesday, Nov. 22, 2022, in Lahaina, Hawaii. (AP Photo/Marco Garcia) 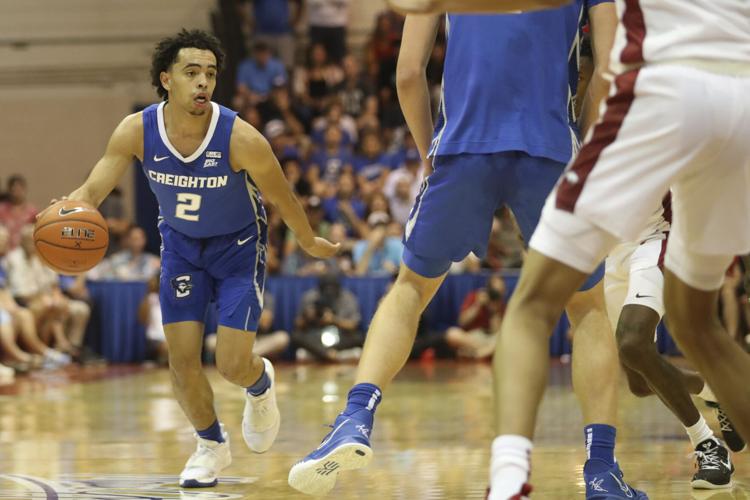 Creighton guard Ryan Nembhard (2) looks for a way through the Arkansas defense during the first half of an NCAA college basketball game, Tuesday, Nov. 22, 2022, in Lahaina, Hawaii. (AP Photo/Marco Garcia)