ANAHEIM, Calif. — Seen and heard from the Wooden Legacy tournament.

Turns out Arizona forward Stone Gettings suffered a concussion on Friday against Penn after all.

Gettings was sidelined in the second half Friday with what UA coach Sean Miller called after the game “one heck of a black eye.” Miller said then he didn’t think Gettings had a concussion and that Gettings would be OK to play Sunday unless he developed concussion symptoms.

UA players and coaches were not available for comment Saturday and a UA spokesman said early afternoon Saturday that nothing had changed. But by Sunday, it was clear that something had changed. The UA announced 30 minutes before the game that Gettings was out for Sunday and he did not dress nor even show up at Anaheim Arena.

Because Gettings is now in concussion protocol, he won’t be fully cleared until at least later this week, meaning he’s questionable at best for the UA’s Saturday game at Baylor.

While many of the Wooden Legacy teams took advantage of free tickets to Disneyland on their off day Saturday, the Wildcats’ recreation consisted of watching the UA football team while eating at a steakhouse adjacent to their Anaheim hotel.

The Wildcats did get something of a Thanksgiving meal upon arriving Wednesday, however, along with other participating teams.

Prepared to make his annual hop between the Territorial Cup and wherever the UA basketball team is playing over Thanksgiving Week, radio play-by-play announcer Brian Jeffries booked himself a round-trip Southwest Airlines flight in and out of Orange County Airport that would put him back in Anaheim sometime Sunday morning.

He never used the return segment. UA president Robert Robbins and athletic director Dave Heeke were doing the round trip on a chartered jet and offered him a ride.

The trio hustled out of Sun Devil Stadium quickly after Saturday’s football game ended at about 11:20 p.m., drove to Phoenix Sky Harbor International Airport, where their jet was waiting for them, and made it to Orange County by 1 a.m. local time.

The thousands of empty seats at the Wooden Legacy that have been visible all weekend on ESPN cameras may disappear next season. The event is upgrading itself to a four-team event with only big-boy teams next season: Georgetown, Kansas, UCLA and Virginia.

While that means more fans and better ESPN ratings, it also probably means mid-major teams such as Long Beach State, Central Florida and Penn won’t be able to test themselves against teams who might not otherwise want to play them away from their home courts.

“It’s an incredible opportunity for Penn to be on national TV, ESPN2 twice and the U (ESPNU),” Penn coach Steve Donahue said. “These guys come to Penn for that type of opportunity, and then to play the caliber of teams like UCF, Arizona and Long Beach at a neutral site? You don’t get that opportunity. It’s usually on their home court and that’s difficult to win.”

Long Beach State beat Providence on Friday for its 12th win over a power-conference team in coach Dan Monson’s 12-plus seasons, and Monson estimated half of them have come in neutral-site events such as the Wooden Legacy.

“I’m bummed,” Monson said. “It’s just such a great opportunity for mid majors to play people on a neutral court and to see where your guys truly stack up. When you go to McKale Center and all these places on the road, it’s not a true barometer on how you stack up.”

“I see the crowd out there,” Monson said. “ESPN has been so gracious for this tournament, and they’ve got to do what’s best for their events. So I certainly understand it but I would love to be a part of these every year.”

Even with a 10:30 a.m. tipoff Sunday, Donahue let his Quakers enjoy themselves on their off day Saturday.

“Went to Disneyland, did the Cars ride, Star Wars,” Donahue said. “Went to eat at Fire and Ice (an open Mongolian grill), which was great. I want this to be fun. We thought the kids had a blast yesterday.”

Besides, Donahue said, playing at 10:30 was no problem for the Quakers, who may have still sort of been on Eastern time. “It felt like an afternoon game,” he said.

Maybe take the under?

UA target Ziaire Williams and his top-ranked Southern California team, Sierra Canyon, weren’t a part of the many high school events surrounding the Wooden Legacy this weekend. That’s because they were busy appearing in Dallas on an ESPN3 stream while beating Duncanville High School 66-63.

Loaded with talent, including the sons of LeBron James (Bronny) and Dwyane Wade (Zaire) and Williams, who won’t join them until Dec. 29 because of CIF transfer rules, the Blazers are so big time that ESPN2 or ESPN3 will carry a total of 15 of their games this season.

Bettors can get action on them, too. SportsBetting.ag lists Sierra Canyon as a 1-3 favorite to win the state title, with an over/under for wins set at 25.5. The site also lists an over/under on Bronny’s scoring average at 10.5 ... though he scored only two in his debut against Duncanville.

“He had 20 assists in the last two games — that’s a 6-8 center. He leads us in scoring, rebounds, assists, blocked shots, minutes played, everything. If we don’t have him, we don’t compete with Arizona, let alone the Villanovas and really good teams in our league.”

— Donahue on Penn’s AJ Brodeur, who had 10 assists to one turnover against Arizona on Friday and nine assists to three turnovers against Long Beach State on Sunday.

Rough head count of people who appeared to be fans — i.e. those not wearing a lanyard or uniform of some sort — at Sunday’s third-place Wooden Legacy game between Long Beach State and Penn.

Gettings appears doubtful for Dec. 7 against Baylor but UA is learning to win through adversity.

Michigan makes a historic entry to the Top 25 at No. 4.

After being named the Wooden Award MVP on Sunday, Arizona guard Nico Mannion picked up Pac-12 Freshman of the Week honors on Monday. 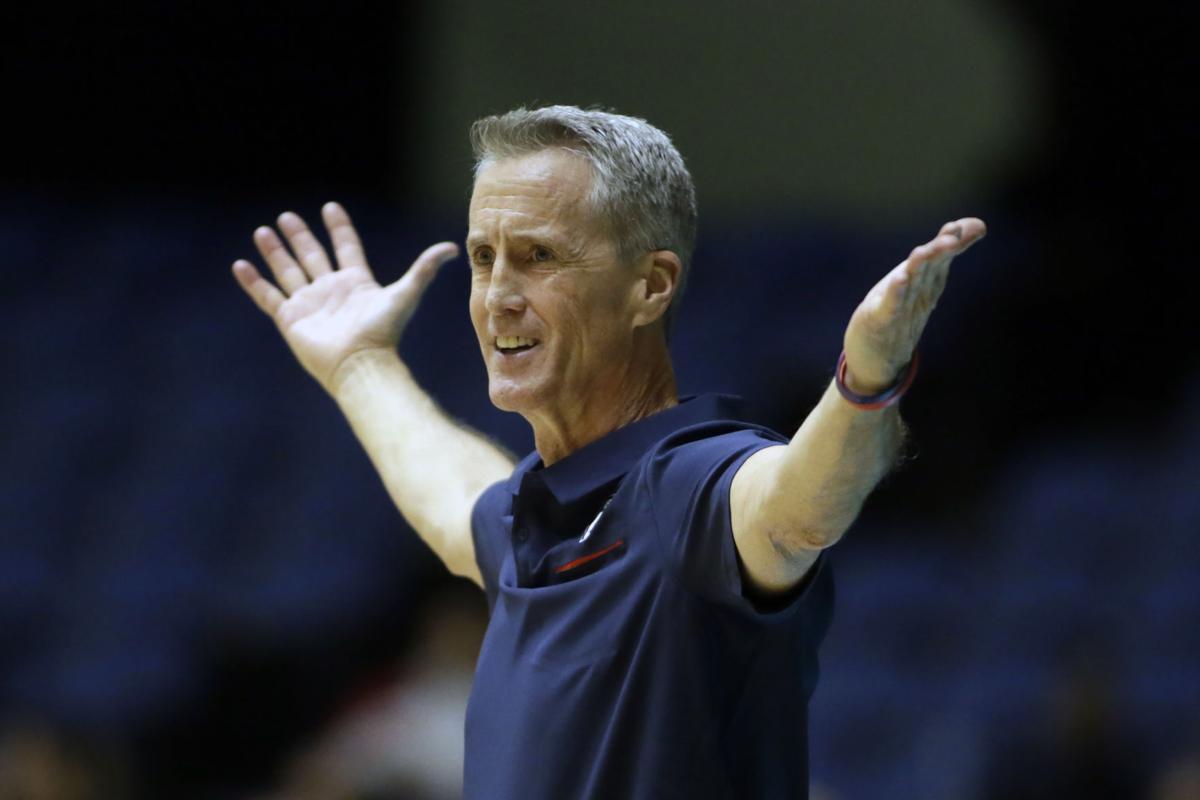 Pennsylvania coach Steve Donahue reacts to a call during the first half of the team's NCAA college basketball game against Arizona at the Wooden Legacy tournament in Anaheim, Calif., Friday, Nov. 29, 2019. (AP Photo/Alex Gallardo) 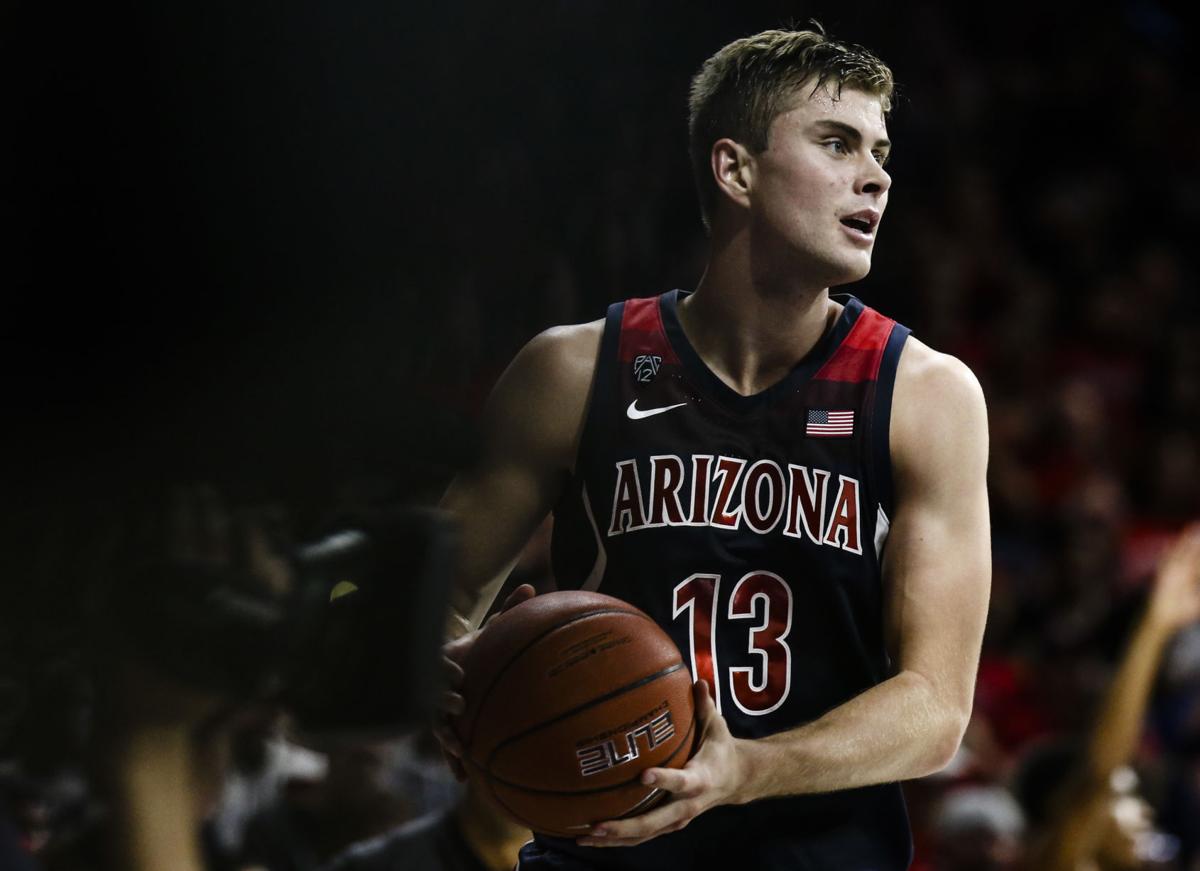 Arizona Wildcats forward Stone Gettings (13) tries to get the ball out of the corner during the First Watch Red-Blue Game at the McKale Center Friday night, Sept. 27, 2019. 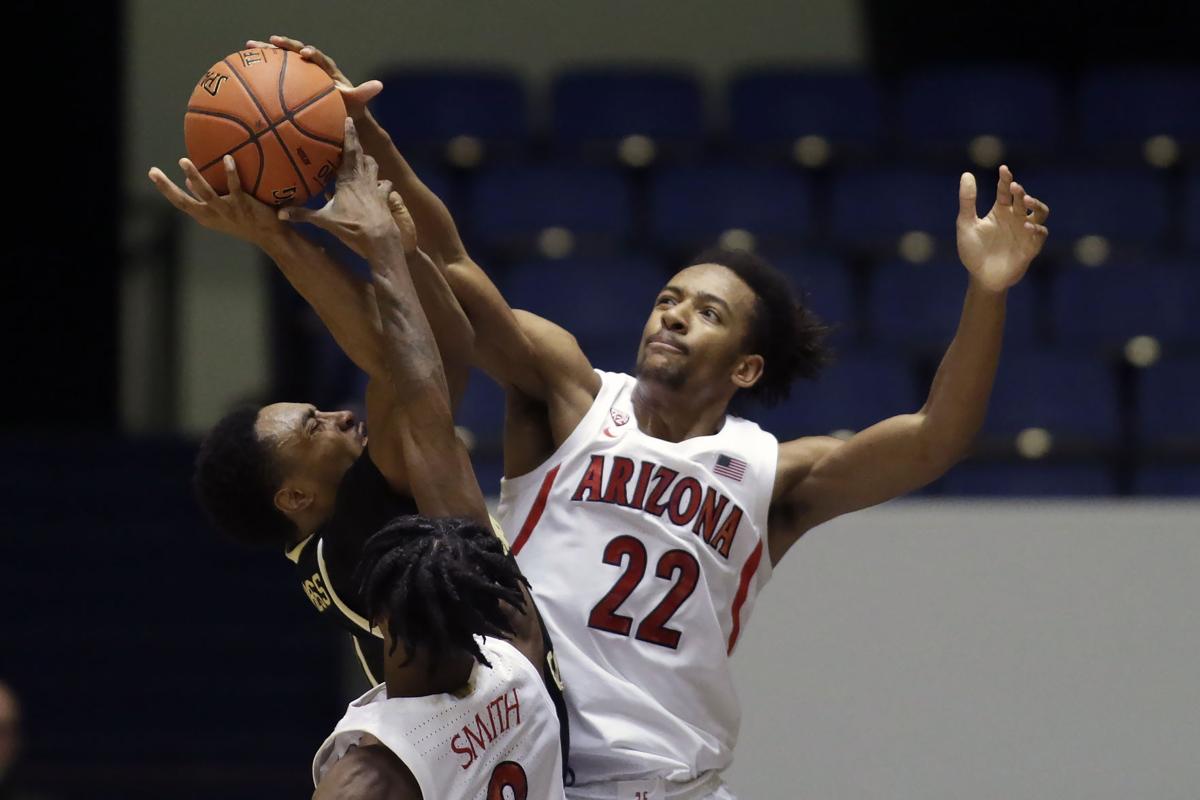 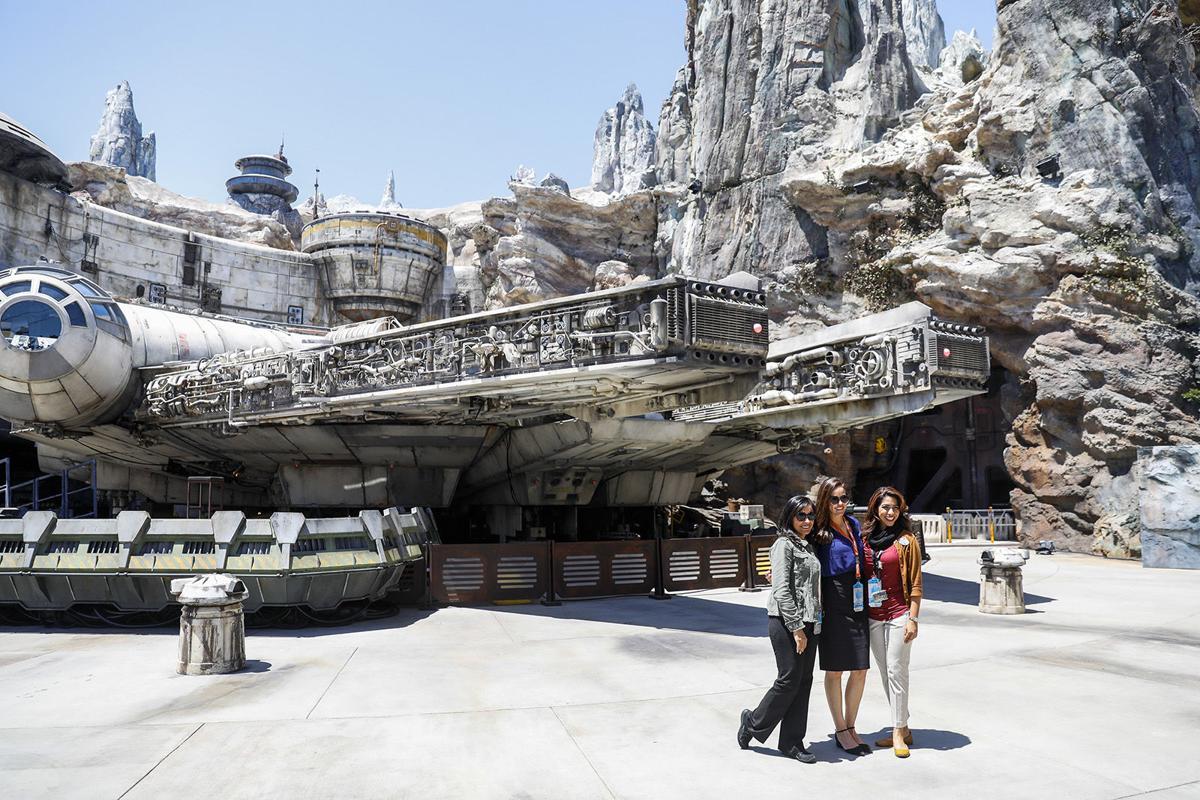 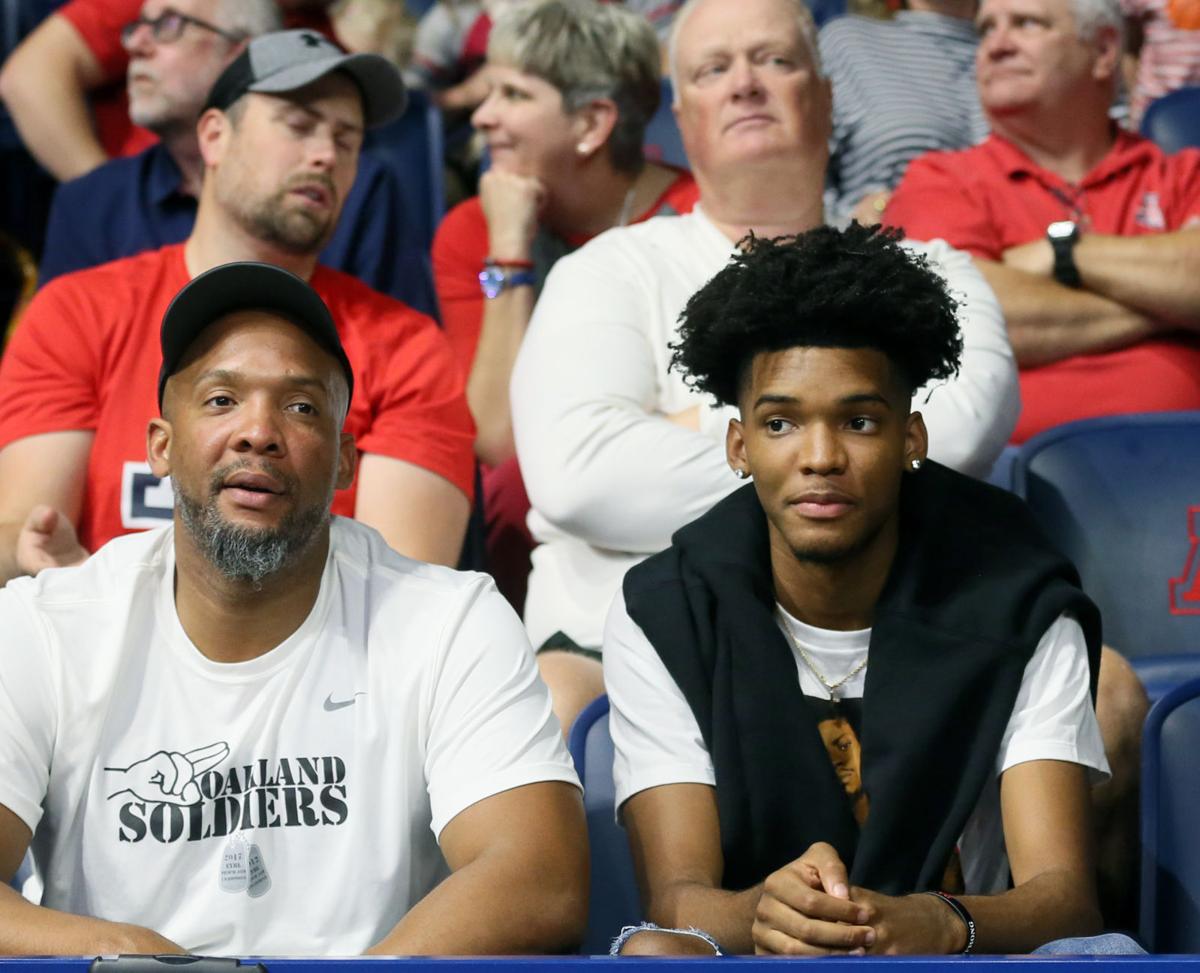 Ziaire Williams, right, a basketball recruit, sits in the stands to watch an exhibition game between Arizona and Chico State at McKale Center. Arizona won 74-65.