'We're trying to find ourselves': Arizona looking for answers after being swept in Oregon
Share this
1 of 2 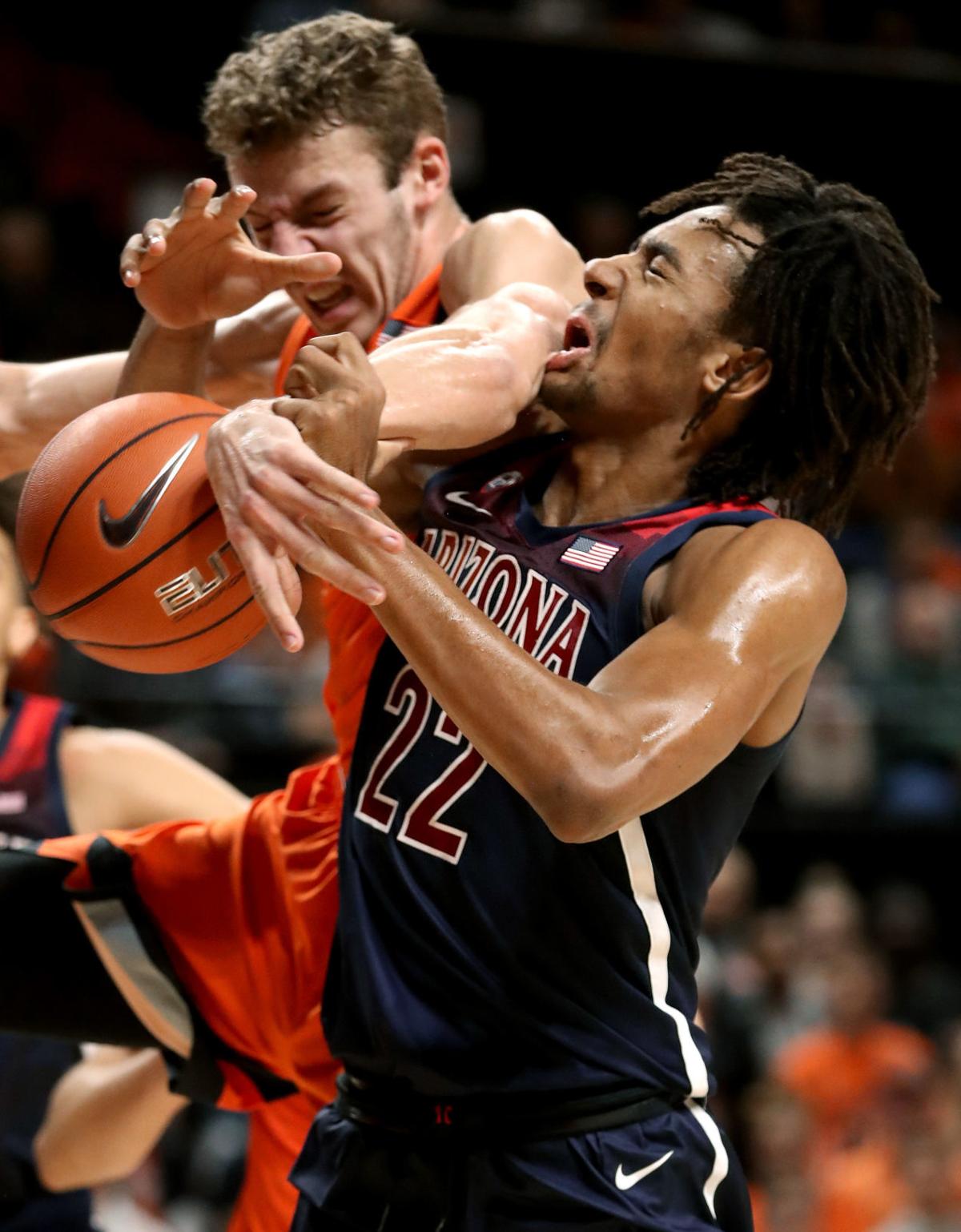 Zeke Nnaji, right, has been a force all year, but the UA offense has struggled at times since opponents realized how closely he needs to be guarded.

Arizona Sean Miller gathers his Wildcats for a talk as the officials review a play late in the second half against Oregon State at Gil Coliseum, January 12, 2020.

CORVALLIS, Ore. — After a loss Sunday that cemented his team’s drop from the AP Top 25 for the first time this season, Sean Miller stepped inside a dreary Gill Coliseum corridor that matched his mood, with old water pipes and all manner of electrical wires hanging over overhead.

Then he noted something puzzling about his Wildcats, considering that it’s now mid-January.

Miller was answering a question about why he didn’t play key reserve Ira Lee for the first 16 minutes of Arizona’s 82-65 loss at Oregon State, but his still unsettled rotation was just one of many things that the answer might have applied to.

Associated Press media voters dropped Arizona on Monday for the first time this season, possibly having enough after a maddening trend in which it was difficult to figure how good the Wildcats actually are.

UA has closely played three Top 10 teams — Baylor, Gonzaga and Oregon — which has helped the Wildcats stay in the computer-driven top 25s.

But the Wildcats still don’t have a signature win. Their best one so far was probably a Nov. 10 home game with Illinois during which the Illini (and the rest of college basketball) didn’t know yet how important it was to defend Zeke Nnaji, who went 9 for 12 from the field in that game.

So with five losses in its past seven games, Arizona finished with the 33rd-most votes in the AP poll Monday. The Wildcats are No. 18 in both the NET and Kenpom, and No. 16 in Torvik ratings, though they are No. 39 in Sagarin.

2. What is their defensive identity?

Oregon State’s zone defenses have often caused the Wildcats trouble over recent seasons, and Sunday’s game was no exception, with UA shooting just 39.6% from the field while making just 5 of 17 3-pointers.

But this time the Wildcats added constant breakdowns on the other end of the court. OSU shot 65.4% in the second half, with Miller even briefly trotting out a zone of his own, something he was characteristically not wild about doing.

“When you get into a deficit on the road and you start doing things that you don’t normally do, that doesn’t oftentimes solve it,” Miller said. “We had no answers for their ability on offense and they kept it really simple.

“I think in the first 10-15 seconds of the possession they just ran like false motion to be deliberate, and then they did an excellent job of just taking that matchup and scoring on us. We were a team that doesn’t really deny in the passing lanes. I think they got three backdoors. We fouled the jump shooter two times, and that’s been a big emphasis.”

Not only did OSU standouts Tres Tinkle (20 points) and Ethan Thompson (18) get theirs but so did unheralded guys such as Alfred Hollins (5-for-8 shooting) and Zach Reichle (11 points).

“Really, we had a hard time on Reichel, and Alfred Hollins played really good as well,” Miller said. “It’s tough.”

The Wildcats also struggled to match up with Tinkle when he played inside, part of the reason Miller said he did not play Lee at the beginning of Sunday’s game.

“One thing about Oregon State — when they play Tinkle at the four and have three guards, they’re small,” Miller said. “So you have to either be able to take advantage of that inside and in rebounding — and if you can’t, then you try to match up with them.

“I think in many ways we were caught in between. I don’t know if we were clearly matched up. We certainly didn’t take advantage of them inside.”

3. What is their most effective rotation?

While Miller said he’s been able to define roles better in recent weeks, the distribution of minutes still varies wildly at times, sometimes because of matchups — and sometimes because guys just aren’t cutting it.

Miller didn’t play Lee early Sunday and only seven minutes total, while he sat out starting center Chase Jeter for the final 13 minutes of regulation and all of overtime on Thursday at Oregon. On Dec. 21 against St. John’s, he didn’t play Lee nor Dylan Smith at all in the second half.

Still, before Sunday’s game, Miller said he was not looking to change the starting lineup.

“At this point, no,” he said. “That doesn’t mean that that may not be in our best interest moving forward

4. Are they capable rebounders?

Considering Lee is the Wildcats’ leading defensive rebounder by percentage, collecting opponents’ misses 23.6% of the time when he’s on the floor, it is possible he might have been a fourth rebounder in the first half had he played more. Only three UA players — Zeke Nnaji (five), Nico Mannion (two) and Stone Gettings (one) — collected rebounds before halftime Sunday.

Overall, Oregon State outrebounded UA 31-28 and the Beavers’ seven offensive rebounds were deceivingly respectable, considering they only missed 23 of their 50 shots.

“Rebounding is so hard for our team,” Miller said. “I’ve haven’t seen a stat sheet ever, I think, where we played 10 players in the first half and we had only three guys get a rebound. That’s mind-blowing.

“Our ability to get second shots when we miss and being able to get defensive rebounds, it’s really hard for us. It’s been hard from Day 1, and now that we’re in conference play it’s a big, big deal.”

Colts, who won at Cienega by 22 last week, have risen five spots in recent weeks.

Rainy weather making its way to the Old Pueblo

Conditions will remain mostly clear in Tucson today but changes are coming over the next two days, the National Weather Service says.

Stone Gettings will replace Jeter in the Wildcats' starting lineup.

Max Hazzard had a season-high 24 points while making 6 of 10 3-pointers.

Zeke Nnaji, right, has been a force all year, but the UA offense has struggled at times since opponents realized how closely he needs to be guarded.

Arizona Sean Miller gathers his Wildcats for a talk as the officials review a play late in the second half against Oregon State at Gil Coliseum, January 12, 2020.