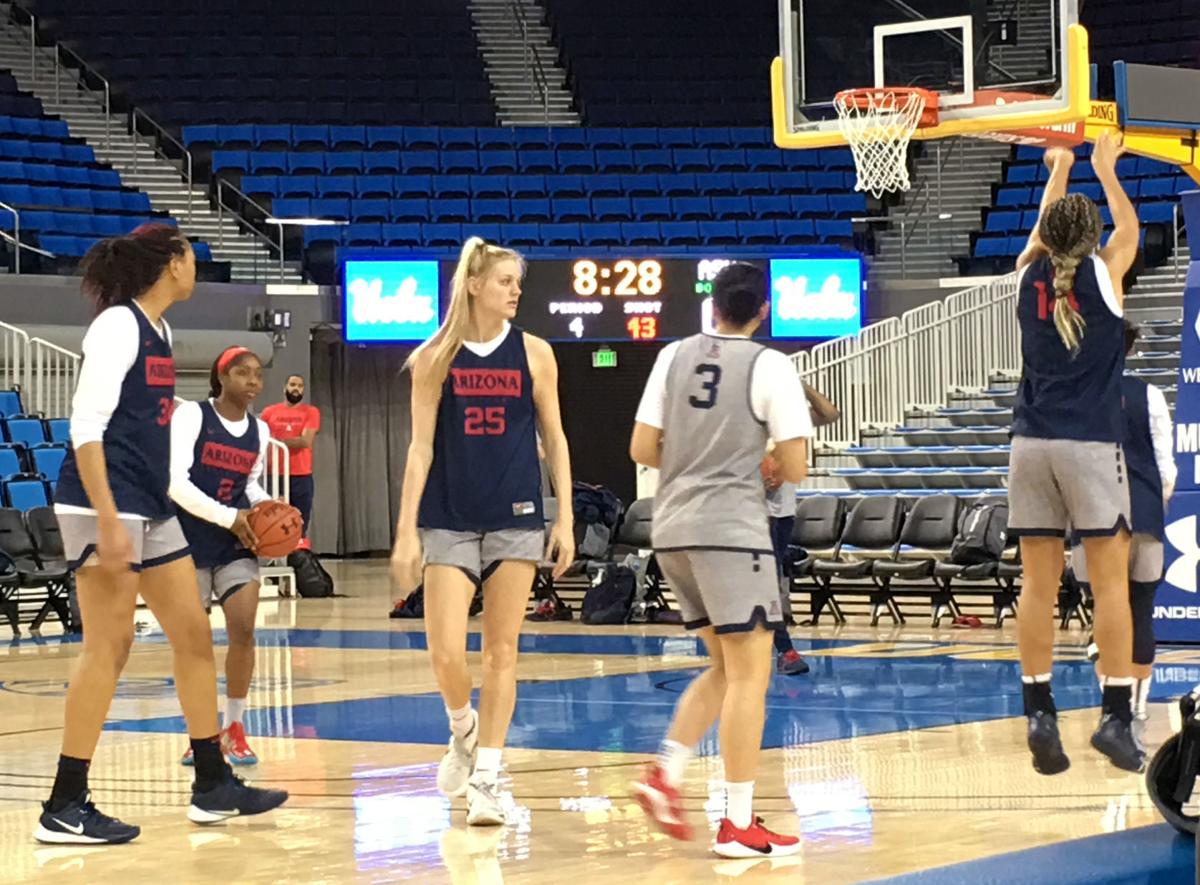 Arizona forward Cate Reese (25) and the Wildcats shoot around during Saturday’s practice in Pauley Pavilion in Los Angeles. UA beat USC on Friday night but fell to undefeated UCLA on Sunday for its first loss of the season. 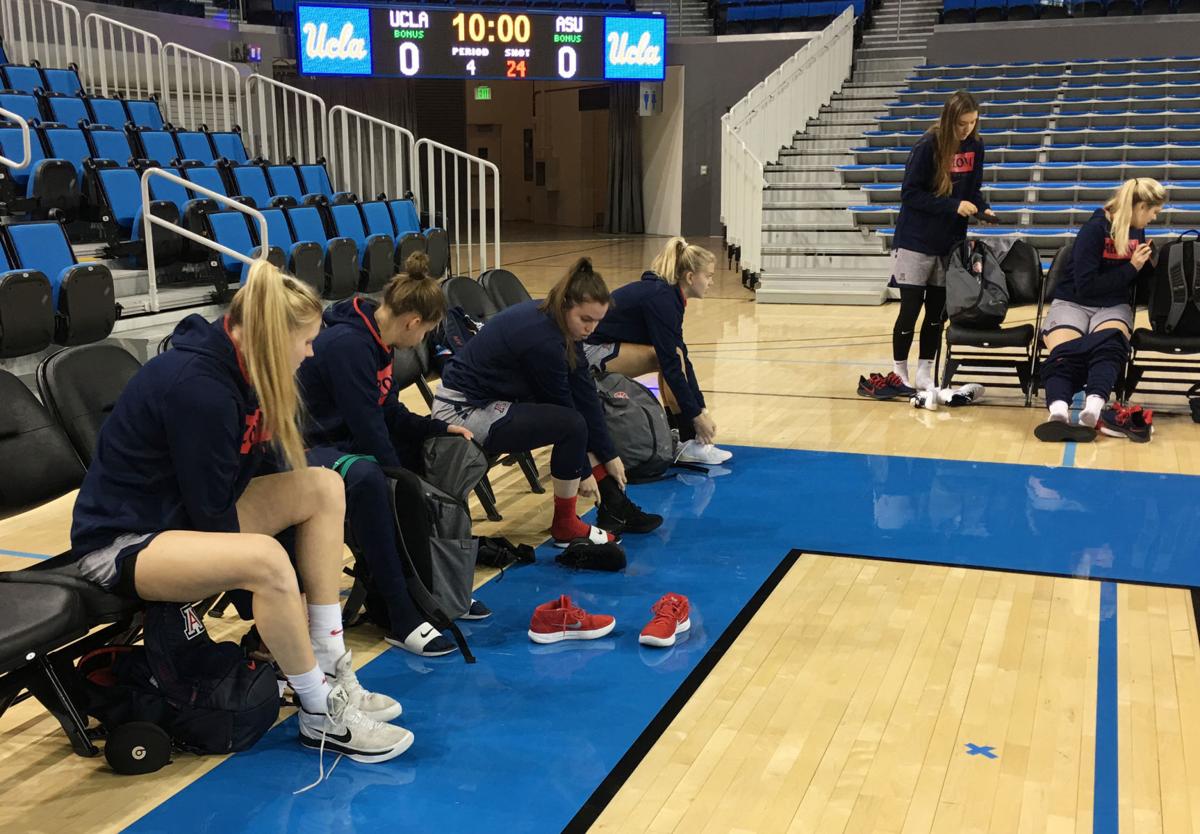 Arizona’s players sit courtside and change into their practice shoes during Saturday’s workout in Pauley Pavilion. The Wildcats hold light but intense practices on days in between road games. 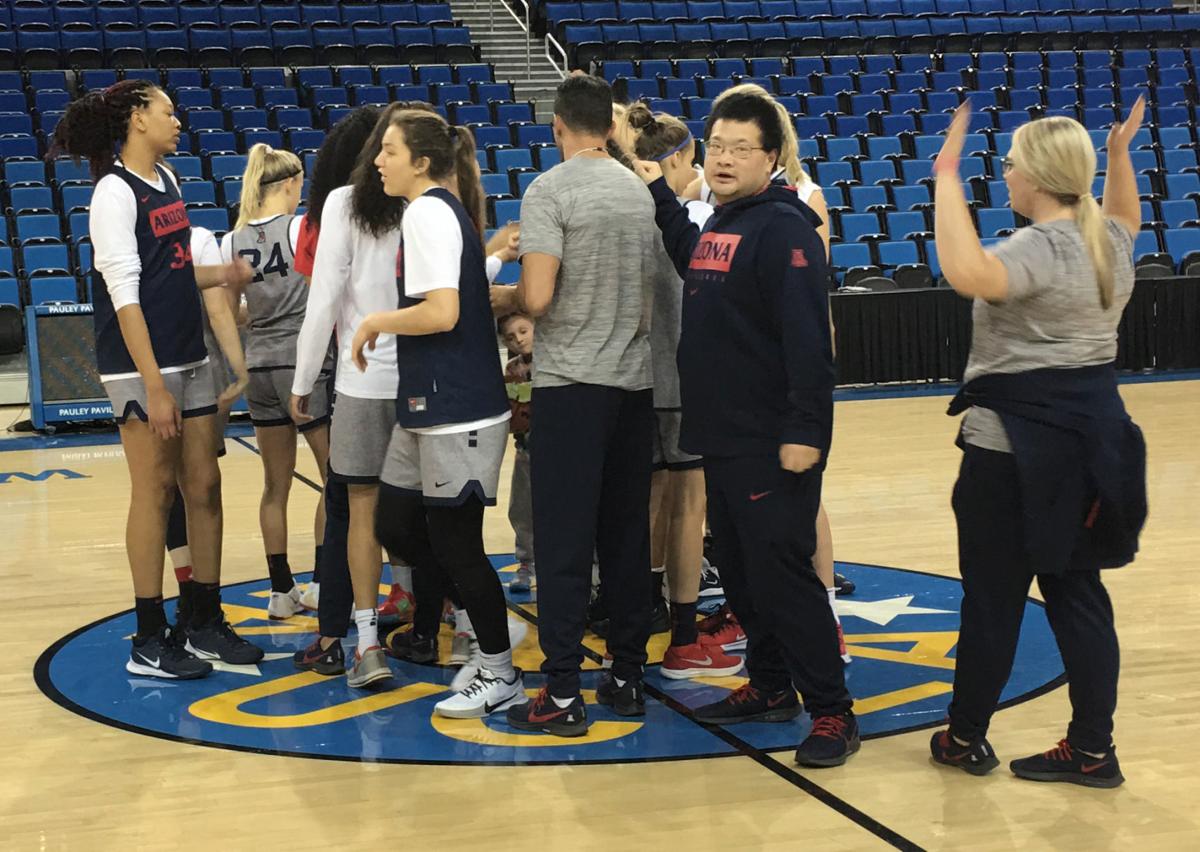 Arizona’s players, coaches and support staffers break a huddle with the phrase “Made for it!” after Saturday’s practice inside Pauley Pavilion in Los Angeles.

LOS ANGELES — The Arizona Wildcats woke up Saturday as one of only six undefeated teams remaining in the country. They were off to both the best start in program history and owners of the longest winning streak, dating to last season, in the country.

Yet they were all business as they recovered from a narrow win over USC while preparing for a showdown against undefeated and 10th-ranked UCLA.

The Star spent part of the day with the team:

By the time the team gathers for breakfast Saturday morning in a Room 203 suite of a downtown Los Angeles hotel, UA coach Adia Barnes and her staff had already reviewed game film from the previous night and looked at the Wildcats’ upcoming opponent.

One very important item — when the pre-practice smoothies would be handed out.

“This team doesn’t like to eat within an hour of practice,” Carrington says.

The conversation darts from smoothies to confirming car rentals for recruiting at girls’ basketball tournaments that night to their plan for UCLA.

The coaches start talking about plays that could be effective against UCLA.

Barnes and Nared focus on how to guard certain players on UCLA and how to switch when the Bruins show certain offensive sets. Coppa pops in with thoughts on defense.

While all sharing input, it’s clear that Barnes has the final call.

It isn’t the coaches’ first experience scouting UCLA. In practice four days earlier, the Wildcats focused on plays that will be successful against both USC and UCLA. The following day, they worked on defensive sets for both teams.

Rebounding will be key, the coaches agree. UCLA had 18 second-chance points the previous night against ASU.

“When UCLA gets an offensive board, they are efficient on their second shot,” Nared said.

Soon, the players move from the breakfast buffet into an adjoining room for a film session.

“We have to be locked in and ready,” Barnes begins.

The UA’s coach asks her players what they thought about Friday night and gives some overall comments before starting with areas they need to improve.

Barnes ends her remarks by focusing on the positive. There was a lot of good, she says — players were aggressive and got their hands on the ball. Sam Thomas’ “help” defense was great, Barnes says, and Semaj Smith had a particularly impressive box-out.

Nared then goes through what to look for with UCLA, noting every player’s tendencies, before showing the Bruins’ offensive and defensive sets.

Then it’s smoothie time, and the players head to the bus.

There will be time for more film study later. Ryan Lee, the video coordinator, loads players’ iPads with film throughout the season. Sophomore forward Cate Reese watched before the team film session and will look at it prior to the game Sunday morning.

“Ryan puts a lot of stuff that’s helpful for us to prepare even before we go through the scout and a lot of us use that to our advantage,” Reese said.

“Because the turnaround is so fast and sometimes faster than normal, doing what you can is really helpful. If you need help, the coaches are always there for you — during lunches, dinners, whenever they’re free to help you if you need something to prepare for the game.

“The iPads really help, and just talking to teammates — if you don’t know something on the court, the best thing to do is communicate with your teammates.”

The ride from Arizona’s hotel to Pauley Pavilion for a practice takes roughly 30 minutes. As the bus rumbles, a voice from the back yells out “Jess, let’s take a detour to the beach!”

Carrington and the UA coaches laugh. They all know that’s not on the agenda for this afternoon.

Arizona’s practice at Pauley will be light. The players need to recover from playing less than 20 hours ago.

“We can’t go hard in practice,” Barnes says. “They won’t be able to play Sunday.”

“It is difficult,” guard Bryce Nixon says. “We all realize it’s a difficult turnaround, but I also like it because I think like we’re a lot more focused on the Saturday practices — we get right to it on the scout.”

The practice lasts two-plus hours, ending with a UA tradition — the half-court shots. Players and coaches launch shots from UCLA’s iconic half-court logo, as they do every Saturday between games, stopping when freshman Birna Benonysdottir swishes one.

They then gather for their huddle, finishing with their slogan “Made for it!’

The Wildcats’ day ends with a meal and a team photo taken in front of the Beverly Hills sign.

Arizona’s 19-game winning streak ends the following day on UCLA’s court, but it wasn’t a total loss. The Wildcats ended up in Santa Monica, where they watched the sunset before boarding a plane back to Tucson.

Recently, Arizona’s post players have posted photos online of their huddle and the phrase “Big Guards.” It’s something the team takes pride in.

“We always do that — thinking outside of the normal center that just stays in the paint — being effective at the 3-point line, being able to drive, not just posting down low and that’s all you can do,” Reese said. “Because Coach Adia emphasizes being able to be guarded outside the three and inside so you are more effective for the team. We always break (the huddle) — whenever it’s just the posts — we always break as ‘big guards.’ ”

Arizona averaged 4,650 fans during the nonconference play at home, and Barnes is hopeful the Wildcats can draw up to 10,000 fans per game this weekend. The UA hosts No. 3 Oregon State on Friday night and No. 2 Oregon on Sunday.

Greg Hansen: Could Arizona-Oregon be top rivalry of the next decade? Few have been better

Now's the time for the Ducks, but the Wildcats are coming off another dominant decade.

With Nico Mannion bound for NBA, transfer James Akinjo a perfect fit for next season's Wildcats

Suns squander 21-point lead, lose to Kings by 11 at home

The Arizona Wildcats women's basketball team faced off against the Oregon State Beavers at home in the McKale Center Friday evening. After tyi…

Arizona forward Cate Reese (25) and the Wildcats shoot around during Saturday’s practice in Pauley Pavilion in Los Angeles. UA beat USC on Friday night but fell to undefeated UCLA on Sunday for its first loss of the season.

Arizona’s players sit courtside and change into their practice shoes during Saturday’s workout in Pauley Pavilion. The Wildcats hold light but intense practices on days in between road games.

Arizona’s players, coaches and support staffers break a huddle with the phrase “Made for it!” after Saturday’s practice inside Pauley Pavilion in Los Angeles.