Read Today's E-Edition
Share This
When Adia talks, the Wildcats listen: Behind the scenes as Barnes prepares her team
Share this
1 of 2 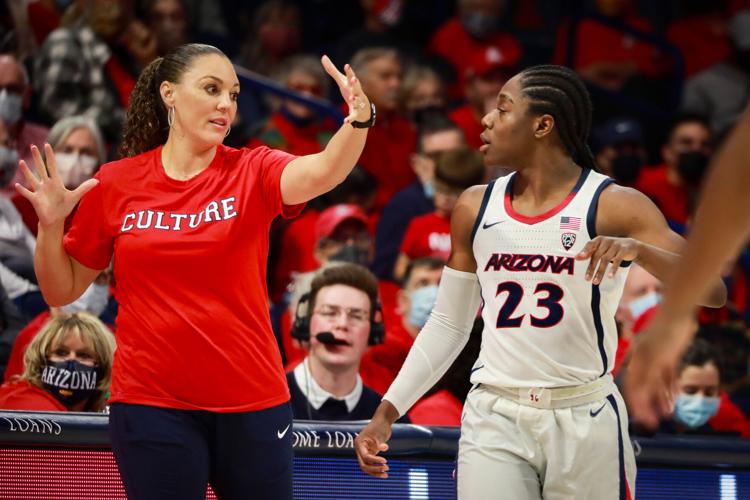 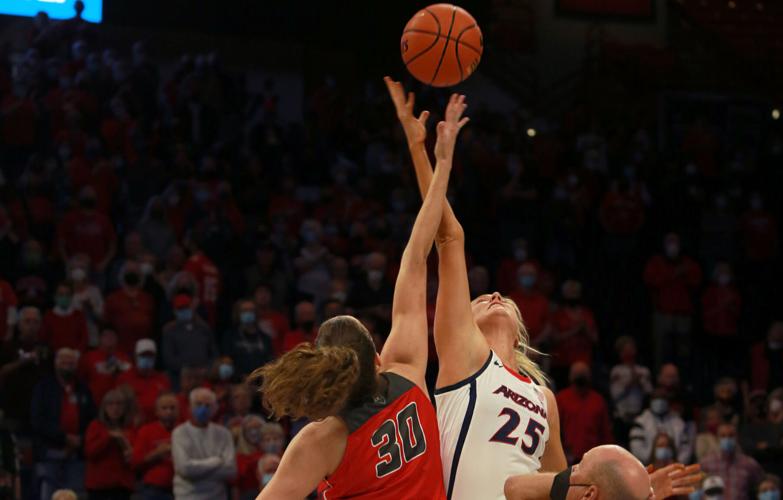 Arizona forward Cate Reese wins the opening tip during the Wildcats’ win over New Mexico. Reese finished with a double-double as Arizona improved to 9-0 for the third time in program history.

When No. 4 Arizona takes on Washington State in Friday’s Pac-12 opener at McKale Center, the Wildcats will try to shake off the rust that comes with a three-week layoff and a COVID-19 pause.

Or maybe the Wildcats won’t be rusty at all. Coach Adia Barnes said her team is ready and eager to play, and that the downtime will work to Arizona’s advantage.

“We get better when we practice,” Barnes said. “When we have long periods of being out, we improve.”

Barnes has told her players as much. She’s a master communicator, whether she’s talking to the Wildcats, her assistants, staffers, recruits or the media.

The Star was given access to Barnes and the UA coaches’ pregame, halftime and postgame addresses during the UA’s Dec. 12 win over New Mexico in McKale Center.

Barnes and assistants Salvo Coppa, Erin Grant and Ashley Davis gather in a room dedicated to them within the Wildcats locker room. Barnes puts on her tennis shoes in another connected room, where she gets dressed for games.

“Are you ready for this?” Barnes jokingly asks a visitor.

The players stop chatting as the coaches enter the film room. Grant leads the scouting report of New Mexico. She starts with defense — Arizona’s foundation.

“Be disruptive. Expect back doors and deny. Meet and switch on staggers. They don’t handle pressure really well. Let’s trap. We’ve got to scramble and rotate to shooters. Contest all shots. Do not foul. … no layups for them; no putbacks.”

The keys to win include defending the 3-point line, executing offensively and slowing the Lobos down.

With the scouting report done, it is Barnes’ turn. She tells her team to start intensely, get to the free-throw line often and take care of the ball.

The goal for the game, she says: Hold the Lobos to 55 points or less and five 3-pointers or less.

“Knowing to get your teammate good shots. Knowing to give Ariyah (Copeland) a second to let her get on a block. Don’t give it to her when she’s sprinting on moves. She’s really good when she has a second to gather herself. Knowing the personnel, knowing your teammates and getting your teammates great shots. And being unselfish and that’s how we’re going to play our best basketball. That’s how we’re going to shoot a really good percentage.

“The more shots the guards make, the more the post gets one-on-one. When you are one-on-one in the post, which you will be a lot today, you need to go to work. You don’t need to pass those out. You need to take good balanced shots — one-on-one, attack. OK? … In the game against zone, penetrate the gaps, get your teammates good shots.”

The players circle around Barnes, and the coach offers one final instruction: “Play together, have fun and kick their butt. Let’s go!”

The first half does not go as planned. New Mexico employs a wide zone defense, something the Wildcats haven’t seen this season. Barnes’ plan to use Copeland, who is starting in place of the injured Lauren Ware, to overpower the Lobos, fails.

Before addressing the team, Barnes gives the Wildcats a few minutes for snacks.

Koi Love grabs a baggie containing three miniature pickles. The salty brine helps “so I don’t get cramps,” she says. Though she soon discards them.

Other snacks on the locker-room table include different types of jerky, veggie chips, pistachios, mango chips and fruit roll-ups. Players love the crackers with cheese and peanut butter. Madi Conner and Cate Reese try a new addition to the snack table: red and orange Jell-O.

While they eat, the Wildcats talk basketball.

Barnes opts to go with a smaller (and faster) lineup: Shaina Pellington at point guard, Helena Pueyo at shooting guard, Sam Thomas on the wing and Bendu Yeaney and Reese in the post. She thinks it’ll help Arizona guard the Lobos better.

Barnes mentions that the key is congested, and that Reese could slip in and post up or look to the corner.

“I was telling Sam … the low person isn’t bumping,” Reese says. “There’s not really like a rotation. She’s just getting there.”

Barnes also tweaks a few things for Yeaney, who is now playing at the power forward slot. Rather than shuffling, “dive on the weak side because they are so overloaded on this side,” Barnes says. That should open up the other Wildcats for shots.

“Punch them in the face right now,” she says.

Arizona does just that. The Wildcats outscore New Mexico 22-13 in the third quarter and control the game the rest of the way, winning 77-60. A pivotal 10-0 run over four minutes put Arizona back on track.

Conner hits 5 of 10 3-pointers and finishes with a team-high 15 points. Reese adds 14 points and 12 rebounds, and Yeaney has 10 points and seven boards.

While Arizona didn’t quite hit its pregame goals — the Lobos hit seven 3s and score 60 points — there is plenty to be happy about.

During the fourth quarter, as the Wildcats are running away with the game, the UA student managers slip off to the locker room to decorate it with steamers, confetti and red, white and blue balloons to celebrate another milestone. Arizona is now 9-0 for the second time in three seasons and third time in program history.

The Wildcats celebrate with cupcakes.

“I’m proud of you,” Barnes tells her team. “We’re 9-0 and we’re closer to our goals. We’re doing things in different ways and I’m proud of how you have handled everything. This is for you.”

• Inside: Cloth masks no longer allowed in McKale / Page C2

So many UA players, coaches and support-staffers were affected that the program effectively shut down over the holidays.

With USC game off table, Arizona Wildcats could face another long layoff

Arizona has no games scheduled until Thursday, when it's slated to face Colorado.

Adia Barnes notched her 100th career win and Aari McDonald was inducted into the Arizona Ring of Honor as the fourth-ranked Wildcats beat WSU 60-52 in their first game since Dec. 17.

Helena Pueyo committed no turnovers and no fouls against a Cougars team that is known for pressuring the point guard.

Down two starters, No. 4-ranked UA sees Trojans pull away in final minutes to win 76-67 in Los Angeles. The Wildcats are now 11-1.

Arizona forward Cate Reese wins the opening tip during the Wildcats’ win over New Mexico. Reese finished with a double-double as Arizona improved to 9-0 for the third time in program history.