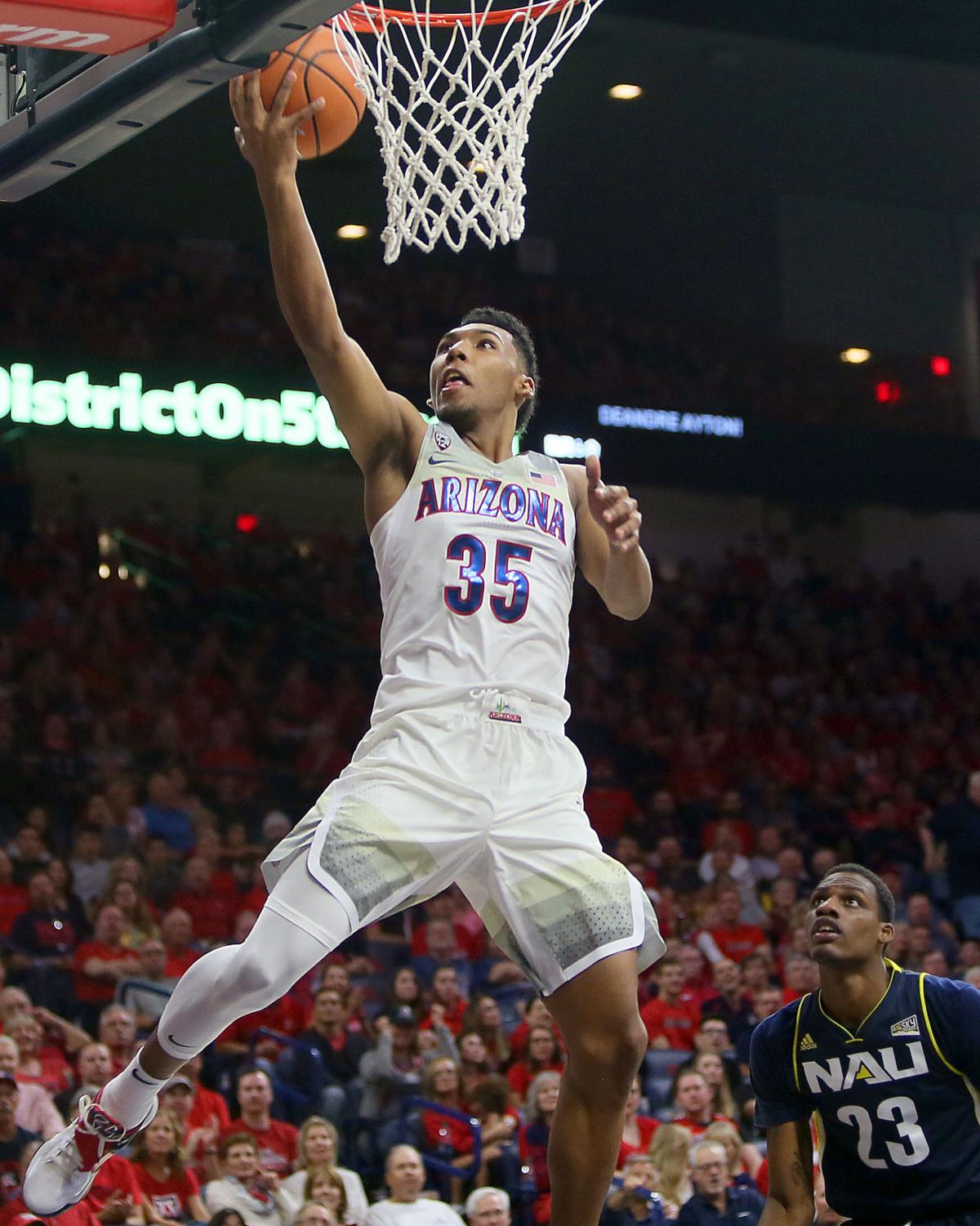 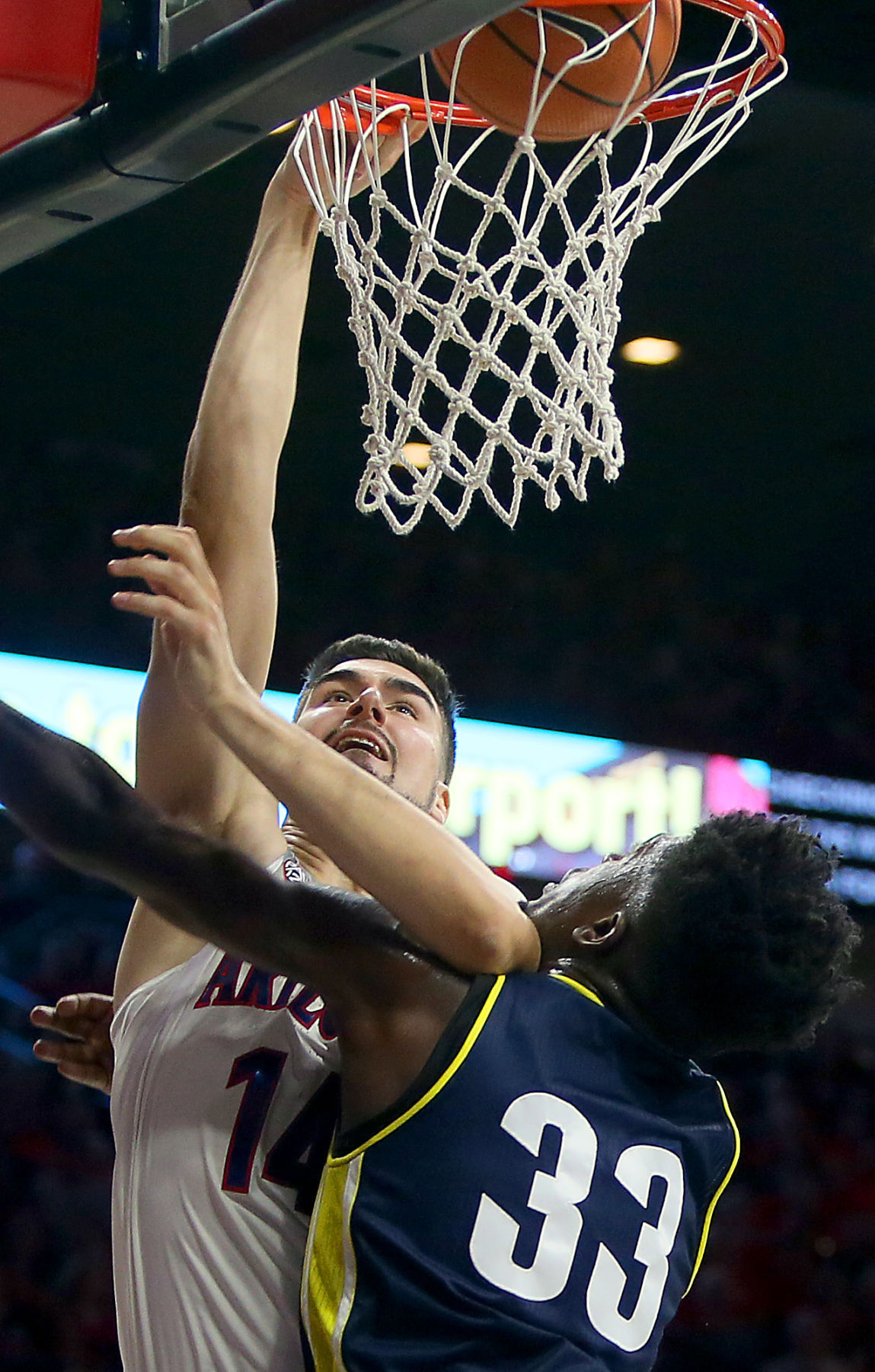 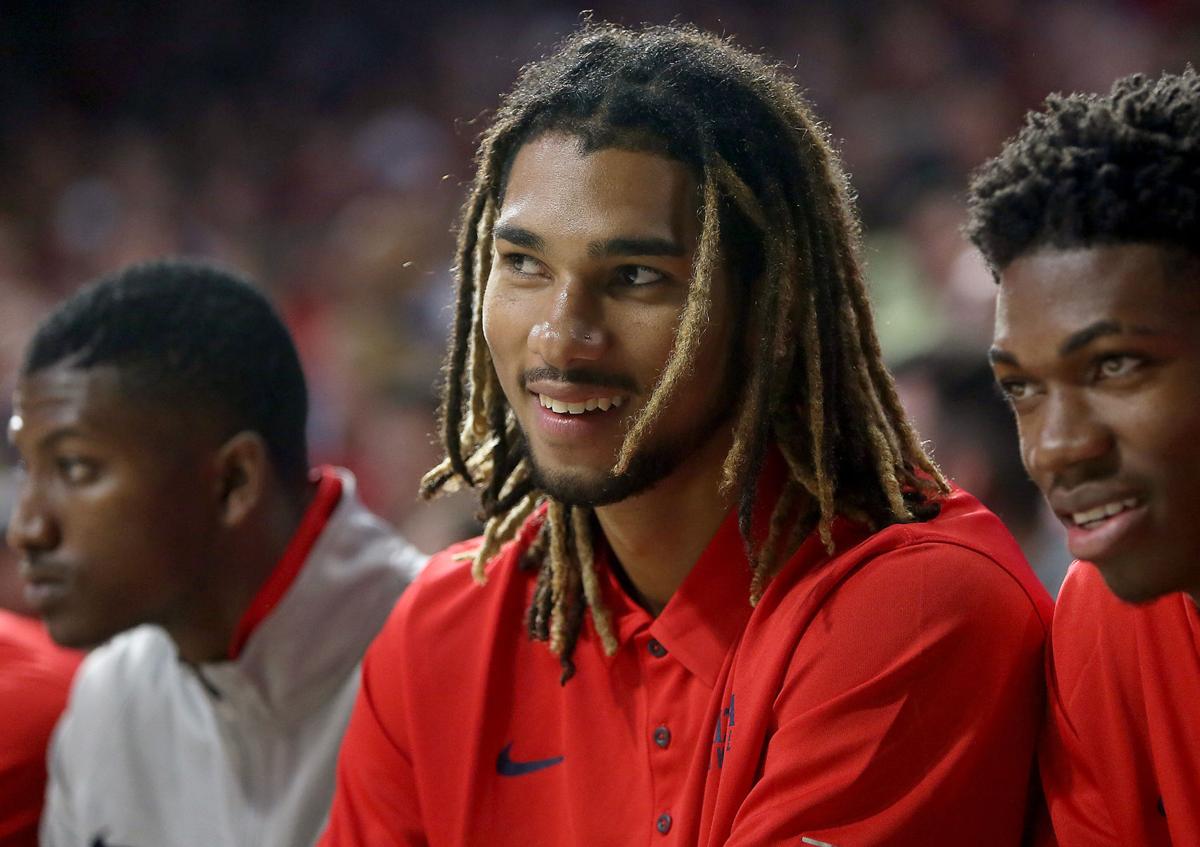 That “Next Man Up” philosophy Arizona clings to in the face of adversity tends to work pretty well much of the time … except when there are no “next men” to turn to.

So when Arizona announced suspensions Friday to forward Keanu Pinder and assistant coach Mark Phelps for NCAA rules violations, the Wildcats went with a seven-man core rotation and were tentative and occasionally ineffective early in their 101-67 season-opening win over NAU at McKale Center.

“I thought the last four minutes of the first half we became disjointed, disconnected,” UA coach Sean Miller said. “We were down (in numbers) as bad as you can be.”

In the end, that meant little, really. Because even as Arizona allowed the Lumberjacks to shoot 48.4 percent in the first half, the Wildcats still had Allonzo Trier, Dusan Ristic and Parker Jackson-Cartwright on the floor, plus freshman Deandre Ayton.

Those guys took advantage of the additional opportunity: Trier scored a career-high 32 points despite picking up three fouls in the first half, while both Ayton (19 points, 12 rebounds) and Ristic (20 and 10) had double-doubles. Jackson-Cartwright dished eight assists.

Trier said the Wildcats were forced to play tentatively early on defense because of worry about getting into foul trouble, while there were also the usual early season issues to contend with.

“We’ve got a lot of work to do,” Trier said. “We’re still learning about our team, what works, what doesn’t, what our strengths are on defense.”

UA clamped down on NAU in the second half, keeping the Lumberjacks to just 29.6-percent shooting after halftime.

Everything was smooth on the other side of the ball in large part thanks to Jackson-Cartwright.

The senior point guard came through in typically quiet fashion — with only five points but eight assists to exactly zero turnovers.

“Forget points,” Miller said. “He dominated the game by making his teammates better.”

The standout performances not only carried the Wildcats to what became an easy win but also gave Miller material to make an easy transition out of what began as another tension-filled press conference.

Before Miller discussed Friday’s game, he said he supported the UA’s suspensions of Pinder (one game) and Phelps (two games) because of unspecified NCAA violations, then said he would point any further questions back to a two-paragraph statement issued by the UA earlier Friday. The news release said Phelps would be suspended without pay for five days for a violation not related to the ongoing federal investigation into the program.

The UA said Pinder violated NCAA rules but gave no other detail.

When asked if the Phelps and Pinder violations were related, Miller pivoted.

“I’m gonna stand by that statement and I’m gonna move on to any basketball related question that you would like to ask,” Miller said, “and I’ll ask myself one: Allonzo Trier, I thought he had a great night tonight.

“I mean, the guy on the opening night of college basketball he went for 32, he went 10 for 13 from the field, 2 for 2 from 3, went (10) of 11 from the foul line and was very efficient. Allonzo has put in as much work on the game of basketball as any player we’ve had. He’s fought through his own adversity. I think it’s helped him. It’s allowed him to grow up. He’s more mature. He’s the best teammate he’s ever been.”

Trier ran into his own adversity before last season when he tested positive for a PED and eventually missed 19 games. UA wouldn’t’ discuss his absence for the first 18 of those games, with Trier saying later he felt like he was living in a “glass house” during that time.

Now, the Wildcats have adversity all around them.

The suspensions to Phelps and Pinder whittled down the UA roster to eight active scholarship players, counting reserve forward Talbott Denny, a Tucson native who made his first appearance as a Wildcat Friday after growing up attending games at McKale Center.

UA said the suspensions of Phelps and Pinder were not related to the ongoing federal investigation. The program is also being examined by an independent investigation commissioned by university president Robert C. Robbins.

Arizona’s off-court troubles began on Sept. 26, when Richardson was arrested on federal bribery and fraud charges. Miller has consistently declined to comment on the situation, except to say he supports the investigation and has long been committed to operating under NCAA rules.

The absence of Richardson and Phelps on the sidelines Friday left Miller with just one full-time assistant, former Washington head coach Lorenzo Romar. Assistant director of basketball operations Austin Carroll has been an acting assistant coach in the wake of Richardson’s paid suspension.

In a Sept. 26 federal complaint, Richardson was alleged to have taken $20,000 and funneling it to five-star point guard Jahvon Quinerly in exchange for his commitment. (Quinerly has since decommitted.)

The complaint also quoted a sports agent saying that a current UA player has been paid, and that he has easy access to Miller’s normally closed practices. In addition, the complaint quoted a shoe company rep saying Arizona offered five-star Florida forward Nassir Little $150,000.

While Phelps will still be suspended Sunday when the Wildcats host UMBC for their second game of the season, Pinder will return. So will Smith, who has been out because of an unspecified violation of team rules.

Miller said Randolph could also return from the concussion he suffered on Nov. 4. Randolph has been cleared to practice fully on Saturday, though he must be proven completely symptom-free after testing himself in practice.

“We have to be careful in terms of how ready he is and also what’s best for our team,” Miller said, “but he’ll work his way back.”

“We want depth. Every coach wants depth,” Miller said. “We want competition. And hopefully having some of those guys back on Sunday will help us.”

The No. 3 Arizona Wildcats took on in-state rival Northern Arizona in the teams' season opener at McKale Center on Friday night. Behind a care…

QUEEN CREEK — Sabino’s quest for a return trip to the state championship game came up 41 seconds and two weeks short.

Team "brought it for a full 60 tonight."

The Wildcast, Episode 40: How does Sean Miller keep everybody happy?

Greg and Ryan discuss the challenges Arizona’s basketball program will face while playing a soft nonconference schedule. Also: How many more g…

Sean Miller would rather talk basketball than suspensions.

Millions in drug-case fines collected in Pima County being questioned

Estimates are that 12,000 defendants paid more than $18 million in fines that were not required.

Arizona is one of just two schools affected by an FBI investigation who has not benched any eligible players.

Pedestrian struck and killed in Sahuarita

The pedestrian was declared dead at the crash scene

The investigation is continuing, police said.

The Pascua Yaqui Tribe will also expand its other Tucson casino.

He was booked into the Pima County jail.