LOS ANGELES — If it all ends this week, short of March Madness and even March itself, maybe it’s just as well for Arizona.

After beating USC 81-72 on Saturday in their biggest win of their self-truncated season, the Wildcats have a chance to at least finish in style.

They still might have to play a makeup game next week at Oregon, which has beaten them six straight times, and they also have the scheduling bandwidth to play another nonconference game, which would be anticlimactic.

But the way their schedule read after the USC game, their season ends Saturday, when Wildcats could finish on a three-game winning streak if they also beat Washington State and Washington at McKale Center.

Unless the Pac-12 tells them otherwise.

After their surprising win on Saturday, the Wildcats walked off the Galen Center court calmly but happily, then showered Miller in the locker room to celebrate what was his 300th win in 12 seasons at Arizona.

It was a big one, in many ways.

After losing five of their previous seven games overall and allowing a one-point halftime lead at UCLA turn into a 14-point loss on Thursday, the Wildcats punched this one in against the Pac-12’s first-place team.

“Being able to actually break through and win, it’s a way to give everybody a lot of confidence,” Miller said. “I could feel it at the four-minute mark (left in the game), that everyone was still just very unsure, because we’ve been in a situation, a number of times this year and it hasn’t always worked out for us. It was good to see us finish the game.”

Miller said if the Wildcats can finish with a few wins it “gives us something to feel good about,” but it might be a stretch to suggest that it will all roll over into next season.

UA has only two seniors, and the NCAA isn’t counting this season on anybody’s eligibility clock, meaning everyone can return if they want to. Except this is high-major basketball, where everything is fluid.

It’s all about the now, in part because who knows what is next.

A number of differing individual efforts Saturday showed why. While Azuolas Tubelis’ 16 points and 15 rebounds against the well-hyped Mobley twins were an obvious highlight, there were also these performances of note Saturday:

“I think James has had an all-conference season, if you look at his numbers, if you look at his meaning towards our team,” Miller said. “He’s slowly getting better, and I don’t think he always recognizes this himself. He’s controlling the game better than he once did. You can be a really good player and maybe not have the impact of winning that some other really good players do.

“I really feel like he’s made a lot of progress over the last month, the last six weeks.”

For Dalen Terry, it was a slump-breaker.

The freshman small forward entered Saturday’s game having shot 2 for 11 in his previous five games but hit 3s from both corners over consecutive possessions to help UA keep the Trojans from mounting a late run.

Miller noted that Terry also hit a couple of critical 3s in UA’s 84-82 win over ASU in Tempe, going 3 for 3 overall in his return to his hometown, but that was a month ago.

Miller said he loved that Terry has kept working since then.

“He just keeps showing up. He just keeps working,” Miller said. “It’s been a while since he’s felt the shot go in a game like that. But that doesn’t mean that he’s quit working early in the mornings, before and after practice — and if you’re talented and you just keep working like that, you eventually break through.”

With 9:14 left Saturday, UA’s sophomore center picked up a technical for a shove on a play in which Ira Lee also committed a shooting foul. That gave USC a chance to cut UA’s eight-point lead to a single possession, but the Trojans hit only 3 of 6 ensuing free throws.

Miller said that was the kind of play that can often change a game’s momentum and, even though it didn’t this time, the play may stick in Koloko’s head for a while.

“He’s a great kid,” Miller said. “He gets frustrated with fouls, like a lot of big guys do. It doesn’t feel like he’s getting the call or that the call’s not made right and he reacts. We talked to him a lot about that, last year, especially down the stretch, and we’ve addressed that this year.

“And he’s got to learn from it. That’s not a good play and I don’t mean this in any other way but, like, I got the officials. I’m the coach. It’s up to our players to play. So we’ll address it.”

The Wildcats’ only McDonald’s All-American, Brown is also now in his third year of college. But after Brown had 19 points and 13 rebounds against the Trojans for his most significant production of his UA career, Miller said he’s still learning.

Brown spent his freshman season of 2018-19 playing mostly behind veterans at Nevada before redshirting at Arizona as a transfer last season.

“And then COVID affected him as much as anybody — not only does he not play an entire year but we didn’t see him until August,” Miller said. “We didn’t have that opportunity to keep working so this is his real first year of playing in college, and he’s had some great moments.

“J.B. is a really unselfish guy but sometimes he’s into his move and he doesn’t recognize the pass-out. He’s starting to do that a little bit so I just think that with experience, a great offseason and more games, you’ll continue to see a more polished, more improved, better overall player.” 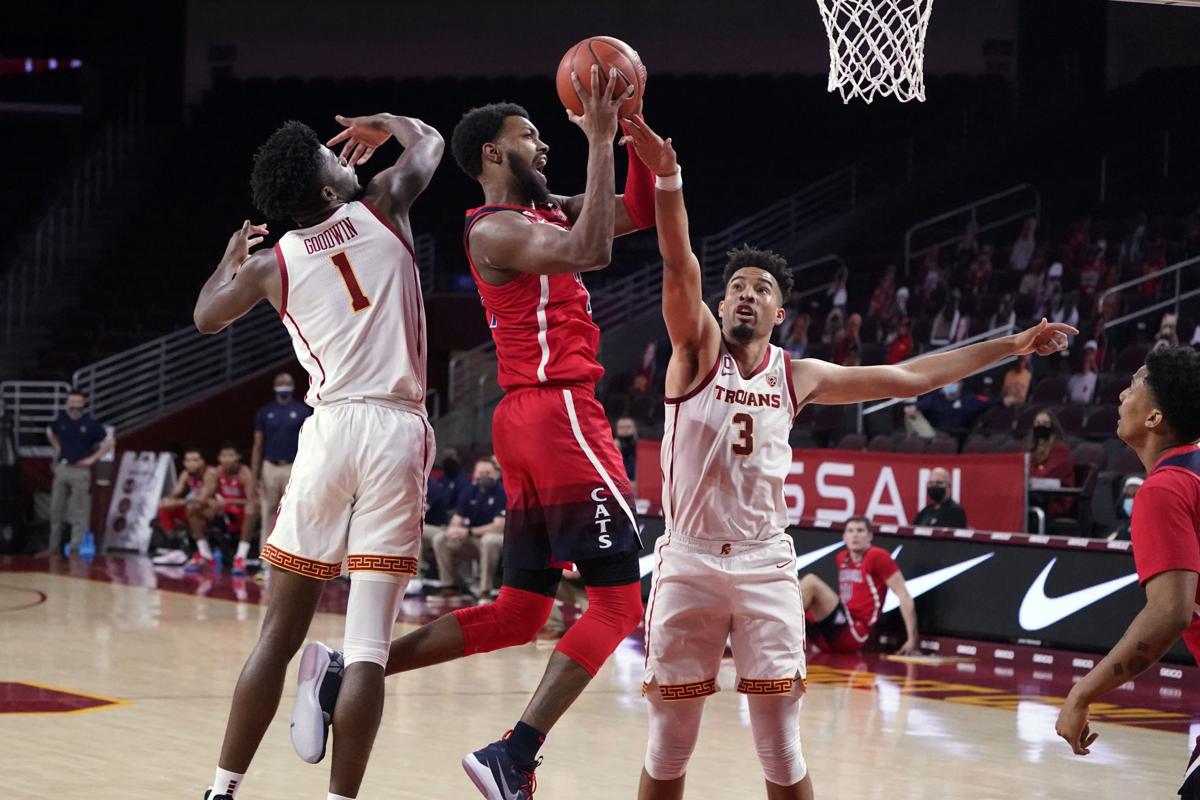 Arizona’s Jordan Brown shoots between Chevez Goodwin (1) and forward Isaiah Mobley on Saturday. UA coach Sean Miller thinks Brown, who had 19 points and 13 rebounds against the Trojans, will be a force for the Wildcats next season. 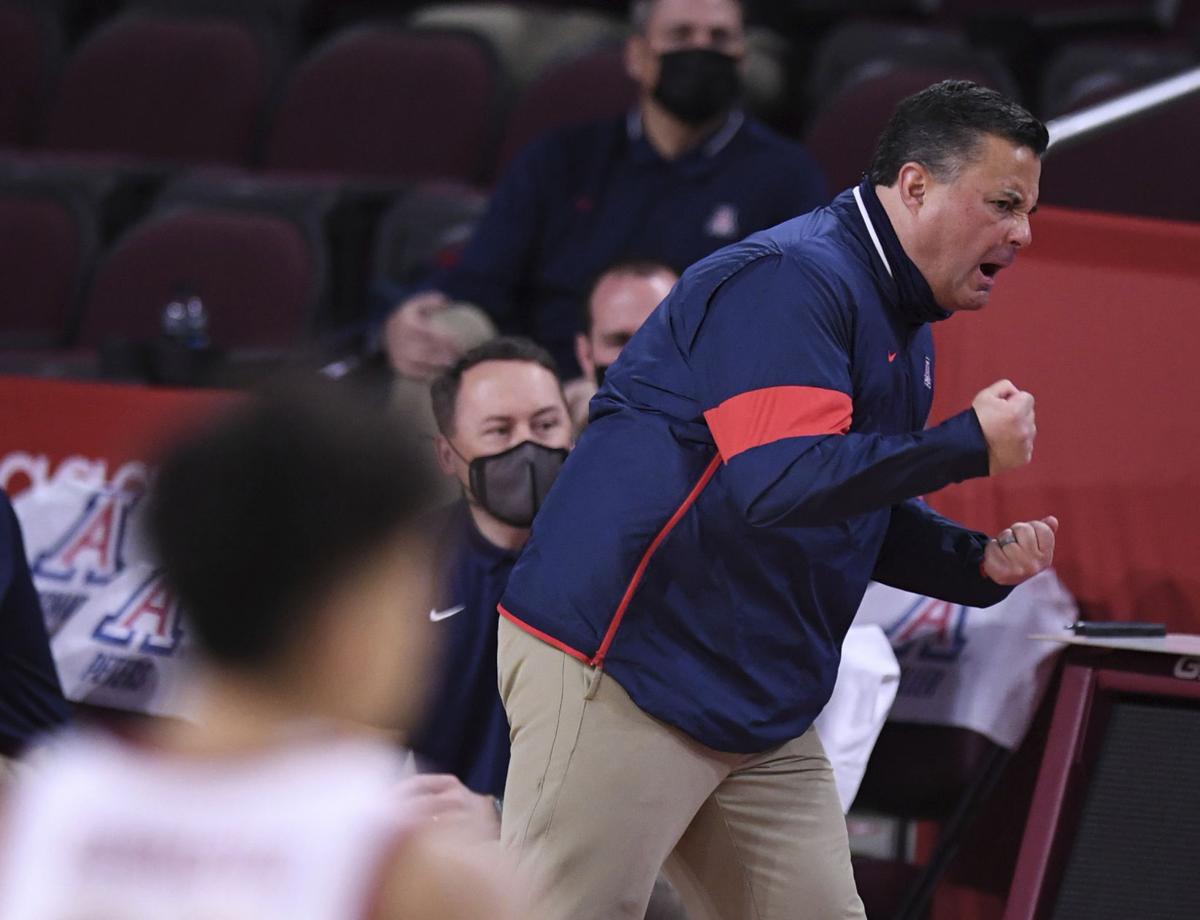 Arizona basketball coach Sean Miller is under contract for one more season. 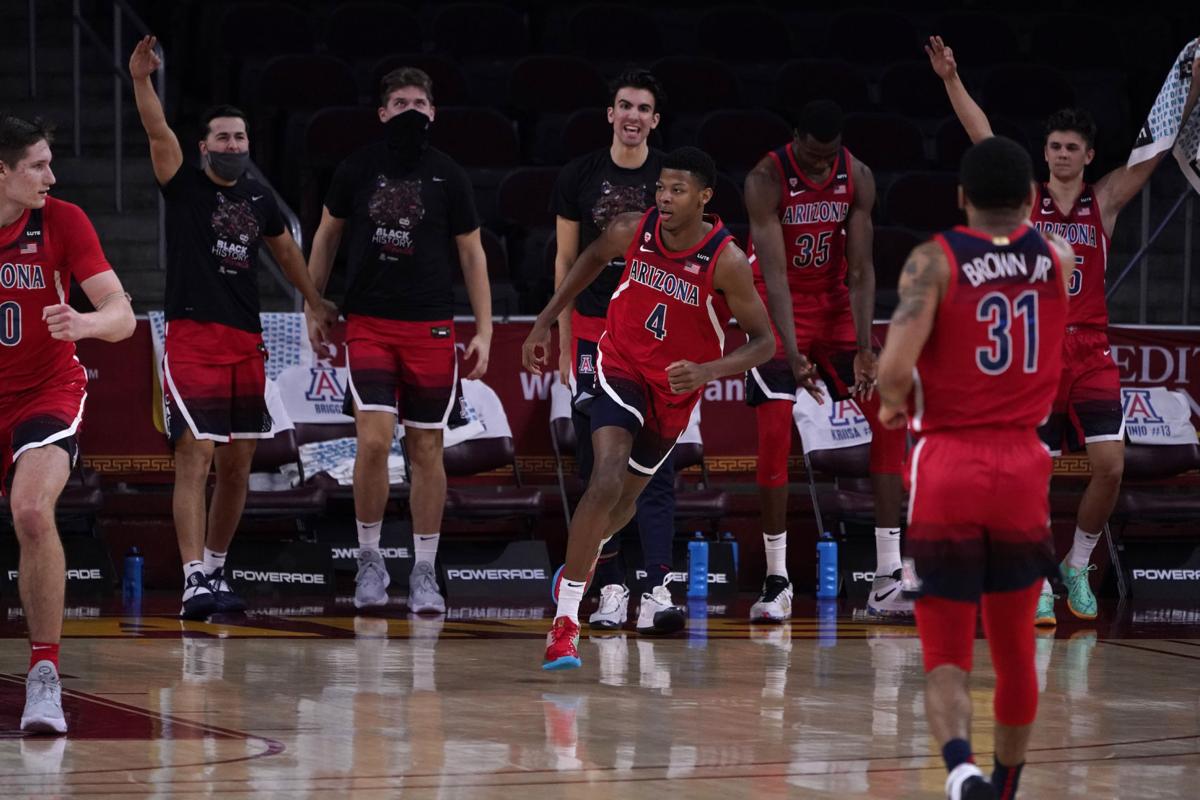 Arizona’s Dalen Terry (4) runs back after making a 3-point basket during the second half of UA’s 81-72 win over No. 17 USC on Saturday in Los Angeles. The Wildcats may be down to their final two games of the season this week as the Washington schools visit McKale Center.