Sophomore guard Jemarl Baker says he has applied for a redshirt waiver, a move that conceivably could help the Wildcats adjust to the loss of injured guard Brandon Williams. Baker’s two seasons at Kentucky were marred by knee injuries. 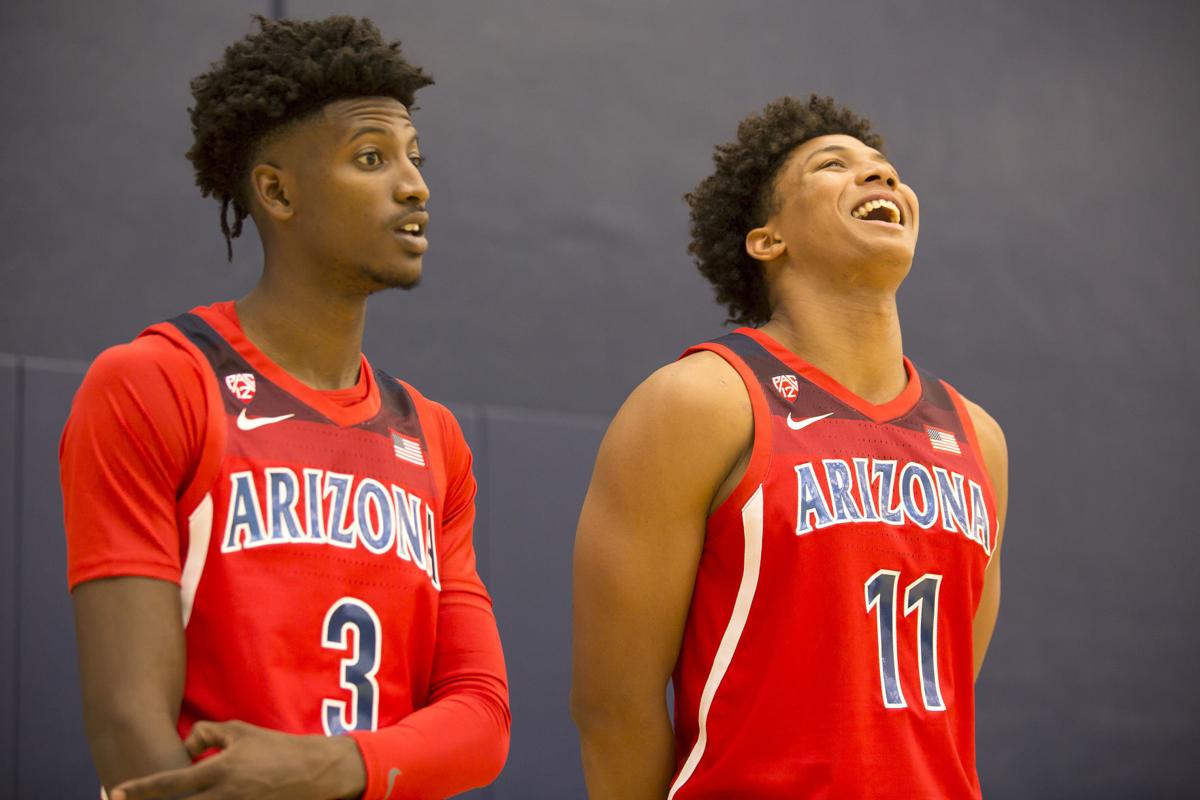 On the eve of their first official practice of the season, the Arizona Wildcats confirmed they are still trying to add another key player to their active roster.

Kentucky transfer Jemarl Baker said Tuesday that he has applied to the NCAA for a redshirt waiver, a move that conceivably would allow the Wildcats to better replace injured guard Brandon Williams this season. Baker declined to specify the reasons behind his appeal, but his two seasons with Kentucky were marred by knee injuries.

“Regardless of what happened in the past, I’m just glad I’m here now, and I don’t really like to talk about it,” Baker said. “I’m glad I’m with this team. I love the players, I love coaching staff, I really do. I’m just looking forward to getting better and going from here.”

During his annual preaseason media day address, UA coach Sean Miller confirmed that Baker and his family were trying to see if the sophomore guard could become immediately eligible. He also declined to provide further detail.

“Jemarl and his family are working towards the possibility of that, and that’s really all I can comment on regarding that,” Miller said. “But if you’d say, ‘is there a possibility that he might be able to play?’ I would say yes. And I think I’ll stop there.”

A Southern California product who once committed to Cal, Baker sat out as a freshman at Kentucky in 2017-18 after undergoing knee surgery and was limited with knee trouble early last season before playing a limited role in 28 games starting in December. He averaged 2.3 points per game and hit 13 of 42 3-pointers while averaging 9.1 minutes per game for Kentucky last season.

Baker said it felt “great” to be fully healthy this season but otherwise declined to detail much about his Kentucky experience.

“I just think it made me stronger mentally,” Baker said. “But other than that, I’m not really here to talk about my experience there. I’m here to talk about being here in Arizona and the players we have here, the coaching staff we have and just working every day to get better.”

Miller: I’m promoting complianceMiller said during Tuesday’s opening address that he would continue to “work as hard as I can to promote and reinforce a culture of compliance.”

Those are the kinds of words Miller may need to defend himself against the NCAA’s head-coach responsibility rule, which states that a head coach is responsible for the actions of direct and indirect reports unless he or she can rebut the presumption of responsibility.

Even if Miller is found without direct wrongdoing in the current NCAA investigation, the NCAA could try to hold him accountable for the actions of imprisoned former assistant coach Book Richardson, who admitted to a federal judge he accepted $20,000 in bribes.

As he did last month, Miller declined to comment on the allegations and NCAA investigation.

“As we now begin a new basketball season and any investigation into our program proceeds, I will continue to work as hard as I can to promote and reinforce a culture of compliance as part of our basketball program, just like I have done for the last 10-plus years,” Miller said. “And I’ll do this with the support of a very strong team, alongside of me every step of the way.

“Moving forward, I’m also going to continue to follow our University of Arizona policy of not commenting on any part of any investigation that involves our university.”

Despite surgeries on both shoulders over the last two years, freshman wing Josh Green says he hasn’t thought about the injuries since being cleared last month.

“Honestly, I feel a lot better with them than I did before,” Green said. “I played most of my last high school season with a torn labrum. So this is my first time when I get to come out and really be 100 percent healthy again. I’m looking forward to it.”

Green had surgery on his right shoulder in summer 2018, missing the July evaluation period before his senior season at IMG Academy, then dislocated his left shoulder during the Hoop Summit game last April and had surgery later that month.

Miller said the two setbacks cost Green about nine months of development — “I don’t want to say he’s rusty, but I think the best is yet to come for him,” Miller said — but Green said there was a benefit to sitting on the sidelines for a while.

“I felt it helped me out,” Green said. “It made me realize what I need to work on. I was able to sit back and watch a ton of film for multiple positions, whether it was the one spot or the three spot.

“I watch players like (former NBA player) Richard Hamilton a lot, him coming up on ball screens and off ball screens and (it helps) just being able to read books. It might sound crazy, but I figured that that’s the stuff I needed to work on.”

The Wildcats will hold their first full practice Wednesday, the first day allowable under NCAA rules because it is six weeks out from their Nov. 6 opener. But they actually have been working out together in limited form since late June.

Once school began last month, Arizona had up to four hours a week to practice together and the Wildcats even held a 24-minute scrimmage on Monday, the same length their Red-Blue scrimmage is likely to be on Friday.

So even though freshman guard Nico Mannion is already well-versed in high-level ball — he played for the Italian national team, in the Hoop Summit and McDonald’s All-American games, among other experiences — he said he’s expanded his game already since moving to Tucson.

“I think I’ve just developed as a player slowly, getting more comfortable on the floor, getting more chemistry with my teammates,” Mannion said. “It all happens real slowly. But I think we just have a great group of guys, and we all work hard.”

Freshman center Christian Koloko, whom Miller said has been even better than expected, said he’s put on 15 pounds on his 7-foot frame while playing opposite Zeke Nnaji, Stone Gettings, Ira Lee and Chase Jeter in the post.

“It’s been really great for me because they are all different players,” Koloko said. “I’m just trying to take a little something from everyone and make my game better.”

After answering the common preseason question of how much pressure he faces to reach a Final Four by saying he “felt pressure the day I came here and it’s never really left,” Miller was asked if it felt like he’s been at the UA for 10 years.

“On the basketball side, it’s not easy to be at one place for 10 years, and my family and I are grateful every day that we’re here and looking forward especially to the challenges of the next seven months. We’re going to have plenty, and hopefully we can bring this team together and have a great season.”

UA coach says Nnaji is "as talented physically as any player that we’ve recruited at Arizona."

The veteran defensive back had studied the ‘Spur’ position long before he actually took the field there.

Both teams are coming off their best performances of the season — in the Bruins’ case, an epic comeback win at Washington State.

Carrie Cecil: Why byes are better after a win, how Colorado's first-year coach gets it done and Saturday's plans

Bye weeks are always better when they come after a big win. The atmosphere in the house is lighter, the pillows feel softer and the days are m…

Normally when the Arizona Wildcats take the court at Richard Jefferson Gymnasium, it's for practice. The only time it's not for practice is sp…

FC Tucson eliminated from playoffs with 3-2 loss to Greenville

The Men in Black's "response is good, but it means nothing.”

Wednesday will be the third day in a row that storms have made their way to the Tucson area.

UA's preseason showcase was moved up two weeks in part to aid recruiting.

The UA has a losing record when Tate passes for 300 or more yards – but other stats of his reveal the winning formula.

The actions of Oro Valley resident Ron Bell played a role in the NCAA's ruling.

Red-Blue game is reintroduction for Devonaire Doutrive, who re-commited to Cats over the summer

Doutrive put on 10 pounds and is trying out a new position — point guard — after initially indicating that he wanted to transfer.

The Wildcast, Episode 211: What to expect from Arizona-UCLA, other Pac-12 games

Chase Jeter to sit out Red-Blue Game with strained groin

Seen and heard from McKale Center on Friday night.

Arizona Wildcats have 'gift of size,' and something even better — versatility up front

From the national anthem until the final buzzer, the Wildcats' big men impressed in Friday's Red-Blue Game.

Star columnist Greg Hansen on how the Red-Blue Game is a point of pride for the UA, why he'll miss former big-leaguer Tom Waddell, and which former Salpointe Catholic football player might make the NFL soon.

Jordan Brown left Reno for a re-recruitment, and the Wildcats landed a key piece to 2020-21 roster

Nevada transfer should push teammates in practice while he sits out the 2019-20 season per NCAA rules.

Sophomore guard Jemarl Baker says he has applied for a redshirt waiver, a move that conceivably could help the Wildcats adjust to the loss of injured guard Brandon Williams. Baker’s two seasons at Kentucky were marred by knee injuries.