WACO, Texas — The Arizona Wildcats found out Saturday that sometimes adversity hits in ways you don’t quite expect.

Signing up for a true road game that would presumably test them before Pac-12 play begins next month, Arizona instead found Baylor’s Ferrell Center turned into a gigantic green-and-red Christmas present.

During their 63-58 loss to Baylor on Saturday, thousands of Texas-based Wildcats fans bathed the place in red while the Baylor fans who showed up rather than watch the Big 12 Championship football game were still distracted.

In fact, until the Bears held off Arizona’s late-game rally, the loudest home cheer was probably when the arena’s videoboard cut to footage of the Bears’ football team taking a 13-10 lead over Oklahoma.

But, for the Wildcats, it was still challenging. Because of the Bears and maybe because of pressures inside their own heads, or some health issues, that resulted in 2-for-18 3-point shooting.

While Arizona didn’t nearly have the sort of rebounding trouble that doomed it against Baylor last season at McKale Center, when the Bears outrebounded UA by 31 while snapping the Wildcats’ 52-game non-conference home-court win streak, the Wildcats still had problems with Baylor’s physicality early.

Arizona was outrebounded 20-13 in the first half, during which it trailed by up to 18 points, and wound up allowing Baylor a total of 13 offensive rebounds that turned into 12 points.

“I think in the first half we came out a little bit flat on the rebounding side of things,” center Chase Jeter said. “But we came back in the second half.”

They did, actually matching Baylor’s 20 second-half rebounding, but their shooting troubles never did go away.

In fact, they got worse.

Entering the game with the second-best field-goal shooting in the country at 52.8%, Arizona shot 33.3% in the first half while making just 1 for 10 from 3-point range. For the game, the Wildcats shot just 26.9 overall and also had 16 turnovers, though Baylor had the same while shooting poorly itself, just 30.4%.

Arizona’s normal offensive efficiency was nowhere to be found, with Nico Mannion going 3 for 14 from the field, Dylan Smith 1 for 8 and Jeter 1 for 5. Josh Green missed all three 3s he took, too.

Arizona finished by making just 2 of its final 19 field goals.

“There were just too many possessions on offense that we weren’t able to score on,” Miller said.

Though Miller said the Wildcats threw up too many shots early in the shot clock, he gave credit to Baylor’s defense, while Mannion (back spasms) and Green (illness) missed significant practice time during the week.

“I thought both guys did the best they could,” Miller said of Mannion and Green. “It’s just a hard situation when you don’t practice. It not only is difficult for the individual player who doesn’t practice, but it’s equally hard for the team because there’s a number of things that we’re trying to improve on.

“But that’s no excuse. It’s just fact that you want your entire team to be able to go and they weren’t able to go. So we did the best that we could.”

As it was, thanks in large part to 21-for-24 free-throw shooting and improved defense in the second half, the Wildcats still had a chance to win at the end.

They went more than 10 minutes in the second half without hitting a single field goal before a five-point play that cut Baylor’s lead to just one with 1:49 left.

As Jemarl Baker hit a 3-pointer to break the shooting slump, Zeke Nnaji was pushed underneath the basket for a foul, then hit two free throws to cut Baylor’s lead to 57-56.

“We had at times maybe our best performance on defense,” Miller said.

“And we hung in there. To have an opportunity late in the game to get it to one or two possessions, that’s what you really hope can happen on the road. And it was just bizarre how we got to that point, because it certainly wasn’t because of offense.”

But that opportunity quickly disappeared, too.

MaCio Teague hit two free throws when he was fouled by Nnaji on the other end and Jared Butler hit 1 of 2 with 35 seconds left to put the Bears up by four. Baylor went into a zone defense for UA’s next possession, with Jeter blocked on a 4-footer, before Mannion threw in a 6-foot runner with 12 seconds left to make it 60-58.

Teague then picked up a foul and hit 1of 2 free throws with 11.8 seconds left, to put Baylor up 61-58 before Green put up a 3-pointer from the left corner that was blocked by Baylor’s Freddie Gillespie.

Having called his last timeout with 2:19 left, Miller was unable to set anything different up from the bench during the final stretch.

“I wish we had a timeout. That could be on me,” Miller said. “But so many times when you’re on the road and you’re struggling and you’re just climbing uphill, you just want to give yourself a chance, and maybe a couple of those timeouts gave us a chance.”

Held to just 1-of-7 3-point shooting, Butler then picked up a foul from Nnaji and sank two final free throws to seal the win.

It was the first loss in 10 games for the Wildcats, a new experience that, Jeter said, they didn’t expect. Even when they were down 18 in the first half and certainly not in the final two minutes.

“I don’t think anybody on this team felt like we were going to lose this game,” Jeter said. “There were moments where we were down big in the first half but our talk at halftime, and the way guys were united on the court. … 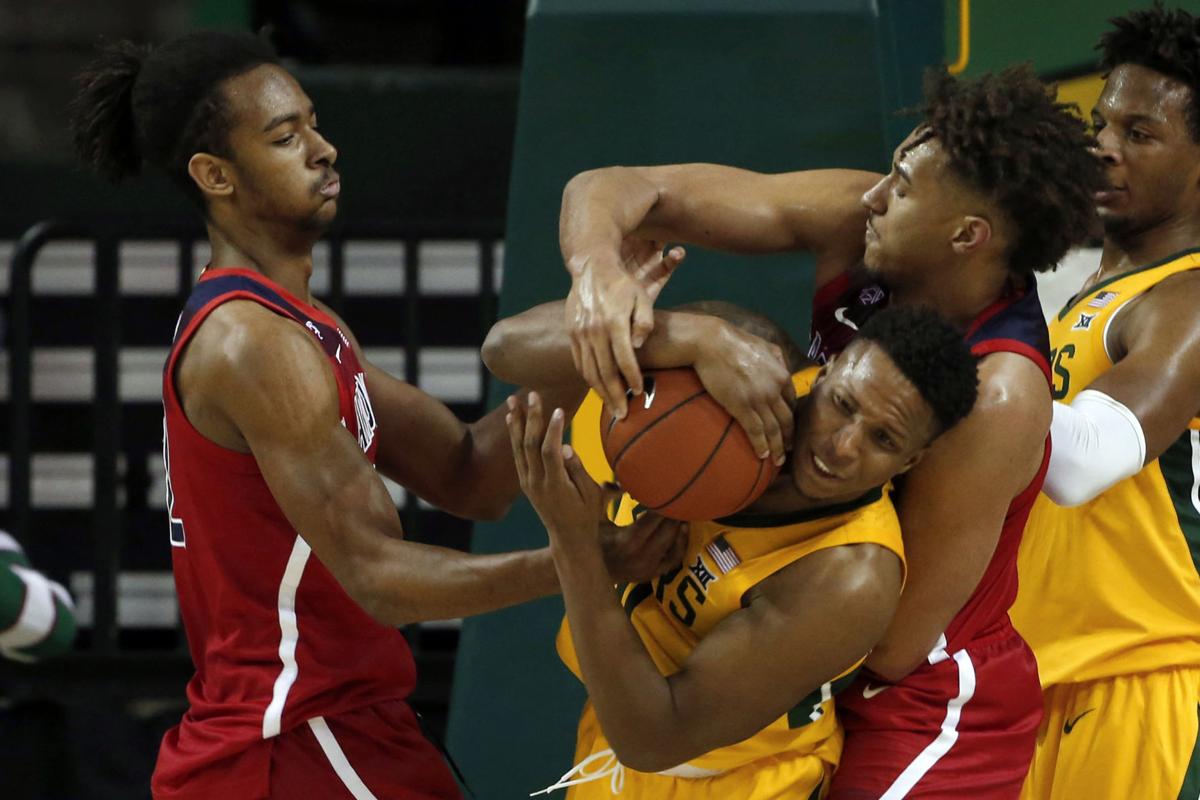 Baylor guard Mark Vital gets a rebound while surrounded by Arizona’s Zeke Nnaji, left, and Chase Jeter in the second half. The Wildcats were outrebounded 40-33 in the loss as Baylor had 13 offensive rebounds that turned into 12 points. 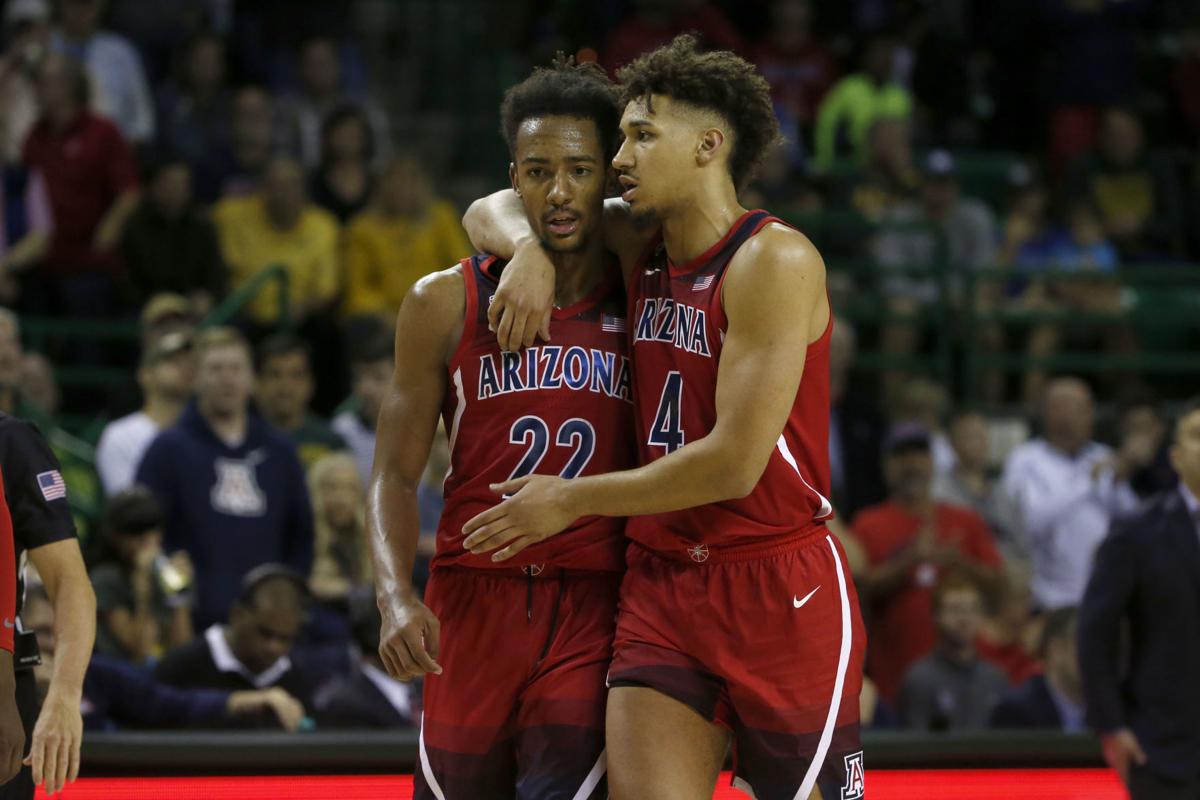 Arizona forward Zeke Nnaji, left, and center Chase Jeter embrace in the closing seconds of the second half of Saturday’s loss to Baylor. 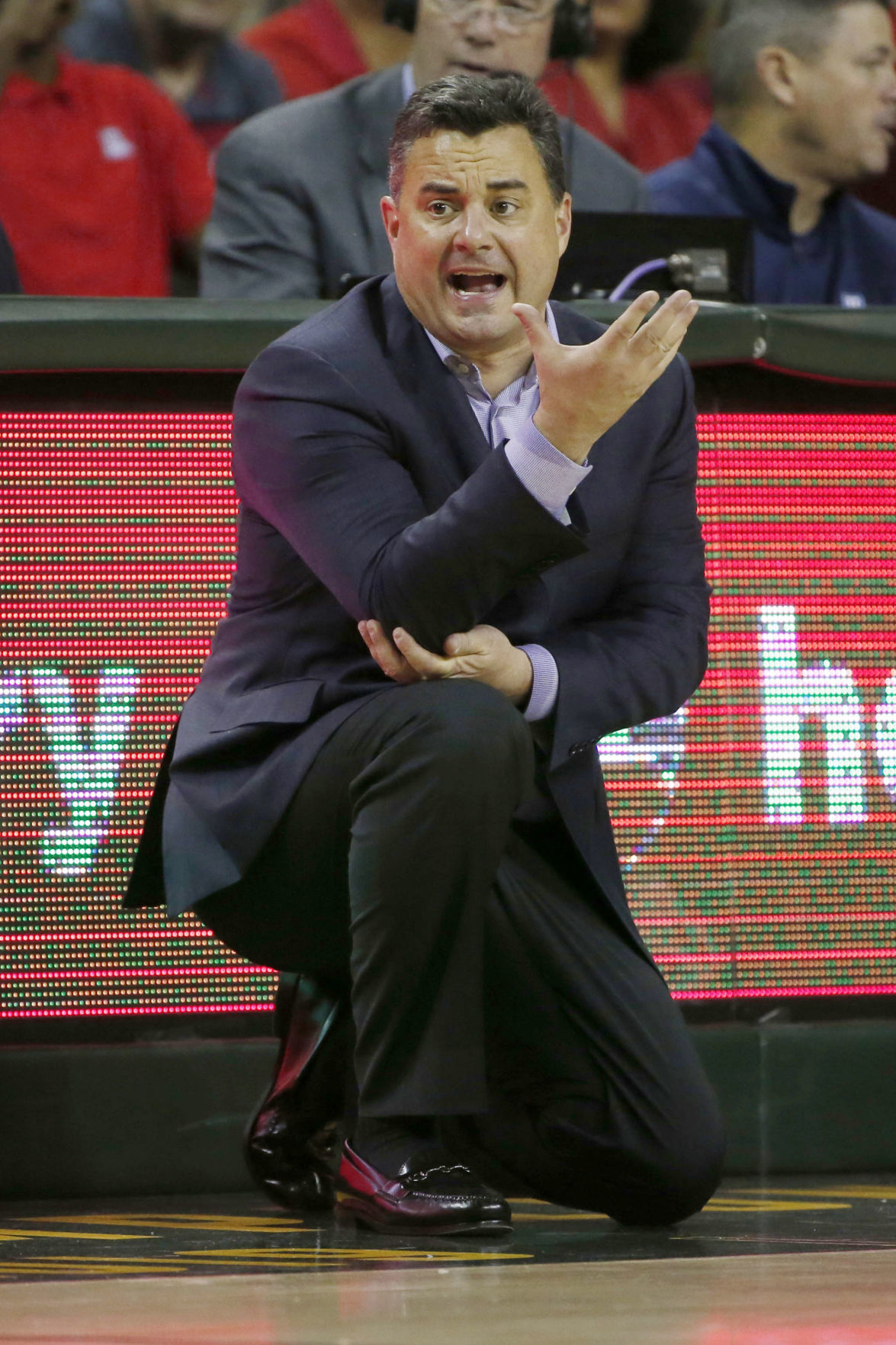