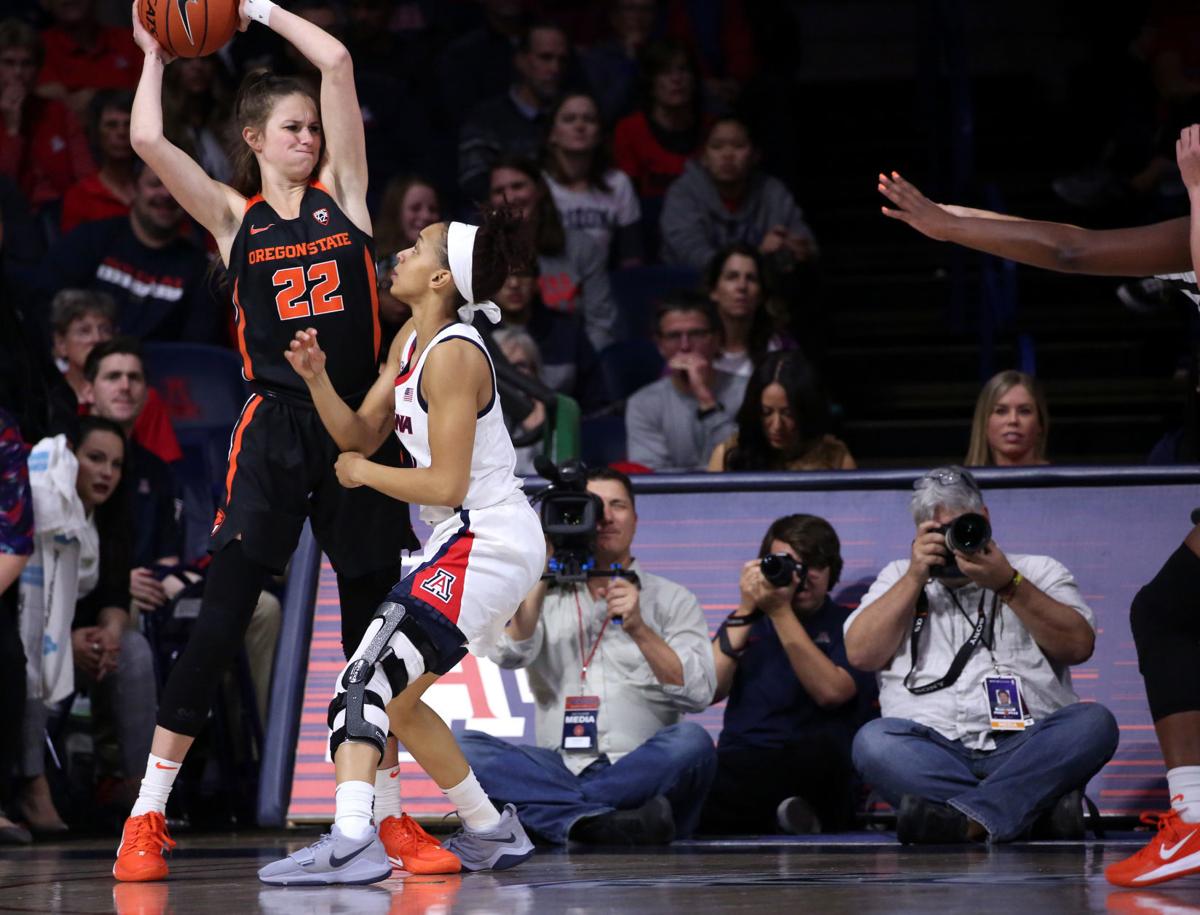 Oregon State’s Kat Tudor is cornered by Arizona guard Amari Carter during the Wildcats’ 63-61 loss to the No. 3 Beavers on Friday. 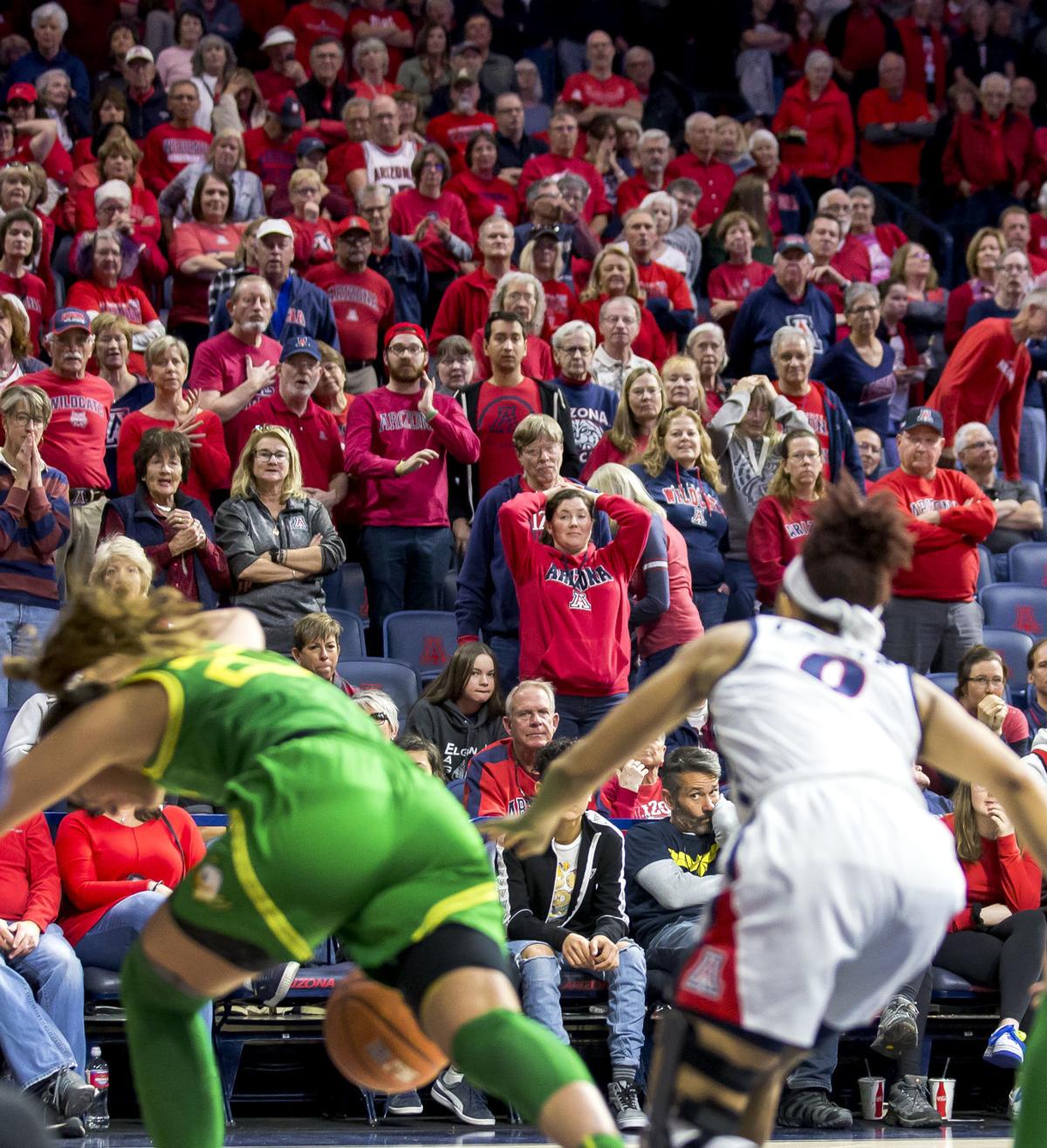 Arizona fans react to a UA turnover in the closing seconds of the Wildcats’ 71-64 loss to No. 2 Oregon at McKale Center on Sunday. “We’re getting there,” said Wildcats coach Adia Barnes. “We’re not there yet.”

After another close loss on Sunday — this time 71-64 to then-No. 2 Oregon — UA coach Adia Barnes had a hard time putting into perspective what the weekend meant for her team. The Wildcats took on No. 3 Oregon State on Friday and the second-ranked Ducks on Sunday, a weekend double unlike any the program has ever faced.

The Wildcats lost both games by a total of nine points. Barnes came away certain that her team is almost there — she knows that they are almost there – a defensive stop or two, a few more defensive rebounds, a few shots going through, and the results would have been different.

“I know we’re capable of beating a top team in the country, but we just need to do it,” Barnes said. “And I think we will. Before the season’s over, I think we will upset a Top 10 team.”

Her players believe, too. And with Dominique McBryde at full strength and Helena Pueyo back from her ankle injury, the Wildcats might have the pieces to pull it off.

Despite slipping in the polls this week from 18 to 21, the Wildcats say they’re focused on taking care of business this weekend. They’ll face Washington State on Friday night and Washington on Sunday afternoon. Last season, the Wildcats braved a blizzard on the way to Pullman, where they lost 90-88. This time out, they have a little inside intel — first-year assistant coach Jackie Nared was on the Wazzu sideline for that game.

They also have a defense that continues to rank among the best in the country.

“It doesn’t matter if you play against Oregon or any other team,” senior point guard Lucia Alonso said. “In the Pac-12, that’s gonna show.”

Aari McDonald added: “We can compete with anybody; don’t overlook us. Our defense definitely keeps us in games.”

Another area that has been stellar in the last four games is free-throw shooting. They hit 39 of their 42 attempts over that span.

UA signee Lauren Ware was nominated for the McDonald’s All-American game Tuesday morning, joining 900 male and female basketball players from across the country. Ware is the only nominee from the state of North Dakota.

The teams should be announced in the next month. The women’s game will be played April 1 in Houston.

Sophomore Cate Reese is the only McDonald’s All-American in UA history.

Ware, who is in Arizona’s class of 2020, is a 6-foot-5-inch post player from Bismarck Century High School. She is a five-star recruit who was rated as No. 22 overall and No. 3 in her position by ESPN.

She is a two-sport athlete who will be playing for the UA’s volleyball team, as well. Prep Volleyball listed her as the No. 50 prospect in the nation.

The Wildcats drew 13,374 to McKale Center last weekend — the most in program history to attend a two-game series.

During nonconference play, Arizona averaged 4,650 — up nearly 3,000 from the previous year.

Oregon and Oregon State are the only teams in the Pac-12 that draw more fans per game. Both Oregon State coach Scott Rueck and Oregon coach Kelly Graves mentioned the McKale Center atmosphere when they were in Tucson.

“You know, I love Tucson. I think Tucson is embracing our team, which has been really fun,” she said Sunday. “That’s why I really wanted this one (against Oregon), too, because everybody came out and it’s a great atmosphere. But I think it’s just showing how much the program has changed. And I think we’re a fun team to watch because we play hard, we play with heart — that’s our identity.

“And we’re getting there. We’re not there yet. I think everybody is supporting them. I don’t think anybody’s like ‘Oh, they should have won’ or maybe they are. But I think it just shows what we’re doing here. And we’re going to get better. And we’re going to continue to recruit great kids and great people and just kind of do what we’re doing. But this is my expectation. I didn’t ever think that I would come here and stay bad forever. I just didn’t think that.”

Not even college football is getting in the way. Barnes’ radio show, held Monday night at Brother John’s BBQ, drew nearly 100 people — even with the national championship game starting at the same time.

The Pac-12 Conference’s 108 league games are all being televised this season, either on the Pac-12 Networks or ESPN.

But not all TV is created equal.

This weekend’s games against the Washington schools will be shown on Pac-12 Networks — but only on the Washington regional network. If you live in Tucson, you’ll have to stream on the Pac-12 Now app or through a smart TV.

Arizona State, however, will appear on Pac-12 Arizona twice this weekend. How does this happen? For starters, the games featuring the UA and Arizona State both start at the same time — 7 p.m. Pacific, 8 p.m. in Tucson. The 7 p.m. local tipoffs were requests by the schools.

“While this allows better local start times, it also means the games cannot go to both of the respective home regional networks,” said Patrick Griffin, Pac-12 Networks’ senior director of programming. “We must ‘split’ the network distribution to ensure every game can be seen on at least one of the regional networks.

“The volume of women’s basketball games, coupled with the improved start times, will cause this to happen more frequently than in previous years. We try to balance the distribution as best as possible, but it’s important to note that in addition to the extensive women’s hoops coverage, there’s also a number of wrestling, women’s gymnastics, men’s volleyball, and early season softball events mixed in on Fridays and Sundays.”

To avoid an overlap, some games are placed on the Pac-12 Networks’ primary channel. Friday night, the main channel will show Utah at Colorado, followed by No. 7 UCLA at USC. Sunday, it will air the showdown between No. 3 Stanford and No. 8 Oregon State and Cal at No. 6 Oregon.

The Star previews all of the game day essentials, from projected starting lineups to storylines and series history, ahead of the Arizona Wildcats' home contest against Utah.

When asked if Arizona's starting lineup would be changed following the Wildcats' road trip in Oregon, Sean Miller didn't rule out the possibil…

No. 21 Arizona rallies from 19 down to beat Washington in Seattle

Oregon State’s Kat Tudor is cornered by Arizona guard Amari Carter during the Wildcats’ 63-61 loss to the No. 3 Beavers on Friday.

Arizona fans react to a UA turnover in the closing seconds of the Wildcats’ 71-64 loss to No. 2 Oregon at McKale Center on Sunday. “We’re getting there,” said Wildcats coach Adia Barnes. “We’re not there yet.”