Wildcats shoot better than 50% in win over Colorado, improve to 13-1
Share this
Bruce Pascoe

Former Wildcat signee K.J. Simpson scored a career-high 17 points for Colorado but couldn't upend his would-be teammates in Arizona’s 76-55 win over the Buffaloes in a late Thursday night game at McKale Center.

Colorado kept UA's scoring margin from being bigger in part because of Simpson's efforts and by scoring 20 points off 16 UA turnovers.

While Simpson scored his 17 points on 5-for-11 field goal shooting, and hitting all five free throws he took, Arizona featured a balanced offensive attack with four players scoring 12 or more points.

Justin Kier and Azuolas Tubelis each had 14 points while Tubelis added eight rebounds and an assist. Bennedict Mathurin had 13 points and five rebounds while Pelle Larsson had 12. Meanwhile, guard Dalen Terry had another boxscore-filling night with nine points, six rebounds and three assists.

The fact that Kier and Larsson combined for 26 points was also a welcome note for the Wildcats, who had just three total bench points in their Jan. 3 win over Washington. Reserve center Oumar Ballo added five points against the Buffs, too.

"It makes our team look even better with them," Tubelis said. "I know how they can play and I know how better they are. They just need to continue doing what they're doing right now."

Having signed with Arizona under then-coach Sean Miller in November 2020 and then flipping to Colorado after the Wildcats fired coach Sean Miller last April, Simpson told the Star earlier this week that he had a respectful conversation in April with new coach Tommy Lloyd. But he said he decided to go with Colorado in part because coach Tad Boyle had recruited him earlier, while Lloyd had not.

In what was therefore a different McKale Center debut than he might have expected back in November 2020, Simpson made a splash anyway.

"He definitely came in here with a chip on his shoulder," said Colorado forward Evan Battey, a close friend of Simpson's from Southern California. "He's an energy guy. He always leaves his emotions on his sleeves."

Simpson indicated a few comments from McKale Center fans added to his emotions, too.

“I just kept my head, knew I didn’t want to focus on what the crowd was saying,” Simpson said. “I knew it was going to be hyped in there. I just focused on the court, talk to my guys.”

Leading 42-38 at halftime, Arizona went ahead 60-43 midway through the second half after Kier and Larsson hit 3-pointers.

"We just had to pick it up at halftime," Kier said. "We had to bring energy and start offensive rebounding and getting stops. We knew in the first half we were slacking a little bit."

Simpson broke the run with a 3-pointer that made it 60-46 but the Wildcats then rattled off nine straight points to put the game all but out of reach, leading 69-46 entering the final four minutes.

At that point, Arizona had shot 60.9% from the field after halftime while holding Colorado to 33.3% shooting. When Arizona went up 74-69 with just over two minutes to go, UA coach Tommy Lloyd pulled all remaining starters.

"They had all five guys touch the ball" before shooting, Battey said. "We can learn from that."

In the first half, Simpson already had his career high with 14 points but the Wildcats still took a 32-28 halftime lead. Colorado struggled with shooting and turnovers early while UA quickly went up 7-0 and went on to build leads of up to 15 points before Simpson and the Buffs pulled back in the game.

After Simpson and Arizona’s Christian Koloko traded baskets that left UA holding a 27-14 lead, Simpson hit a short jumper, then fed Evan Battey inside for a basket that cut it to 27-19. Colorado’s Luke O’Brien then raced unguarded into the paint and stopped for an easy six-foot jumper that made it 29-21.

Simpson later hit a 3 to cut UA’s lead to 29-24 with 2:44 left. He finished the first half scoring his 14 points on 4-for-7 shooting from the field while hitting all five free throws he took.

Earlier, Arizona looked like it would run away from Colorado quickly. UA kept the Buffaloes scoreless for the first three minutes and 16 seconds of the game, with Simpson scoring Colorado’s first points off two free throws.

Through the first four minutes of the game, the Buffaloes missed all five field goals they took and had three turnovers. They didn’t score from the field until Eli Parquet made a short layup with 14:08 left in the first half, before Colorado began to make it a game until Arizona pulled away over the final nine minutes of the game.

"I think we started out the game with good effort and then we kind of let our guard down a little bit," UA coach Tommy Lloyd said. "We got stagnant on offense and there was some questionable decision-making, and defensively we just lost our effort.

"We had a good talk at halftime and the guys responded and played a good second half, especially defensively. For us, it's no secret: Our defense kick-starts our offense. We were able to get some things in transition that kind of loosened up the game a little bit, and I'm really proud of how the guys responded."

+27 Photos: Arizona Wildcats put a nervy first half behind them in a 76-55 win over Colorado, Pac 12 basketball

By the numbers: How Arizona continued its mastery of Colorado at McKale

How Arizona pulled away in the second half to improve to 13-1 this season.

The light now shines on Tommy Lloyd and his 13-1 Wildcats.

Arizona's reserves pitched in during win over CU; Wildcats need them now more than ever

Super senior guard Justin Kier packed 14 points and four rebounds into just 15 minutes off the bench, while sophomore guard Pelle Larsson had 12 points and five rebounds while hitting 2 of 3 3-pointers.

Dalen Terry's personalized ice cream flavor is in stores across all Tucson and Phoenix locations.

Justin Kier will start in Kriisa's place, the first lineup change Arizona has made this season.

Arizona's point guard suffered an injury while “horsing around” with teammates, according to Arizona coach Tommy Lloyd.

Without specifying what happened with Kerr Kriisa, Lloyd said "having a great culture is tough."

Colorado guard Nique Clifford (32) snares the offensive rebound, just out of the reach of Arizona guard Pelle Larsson in the first half. 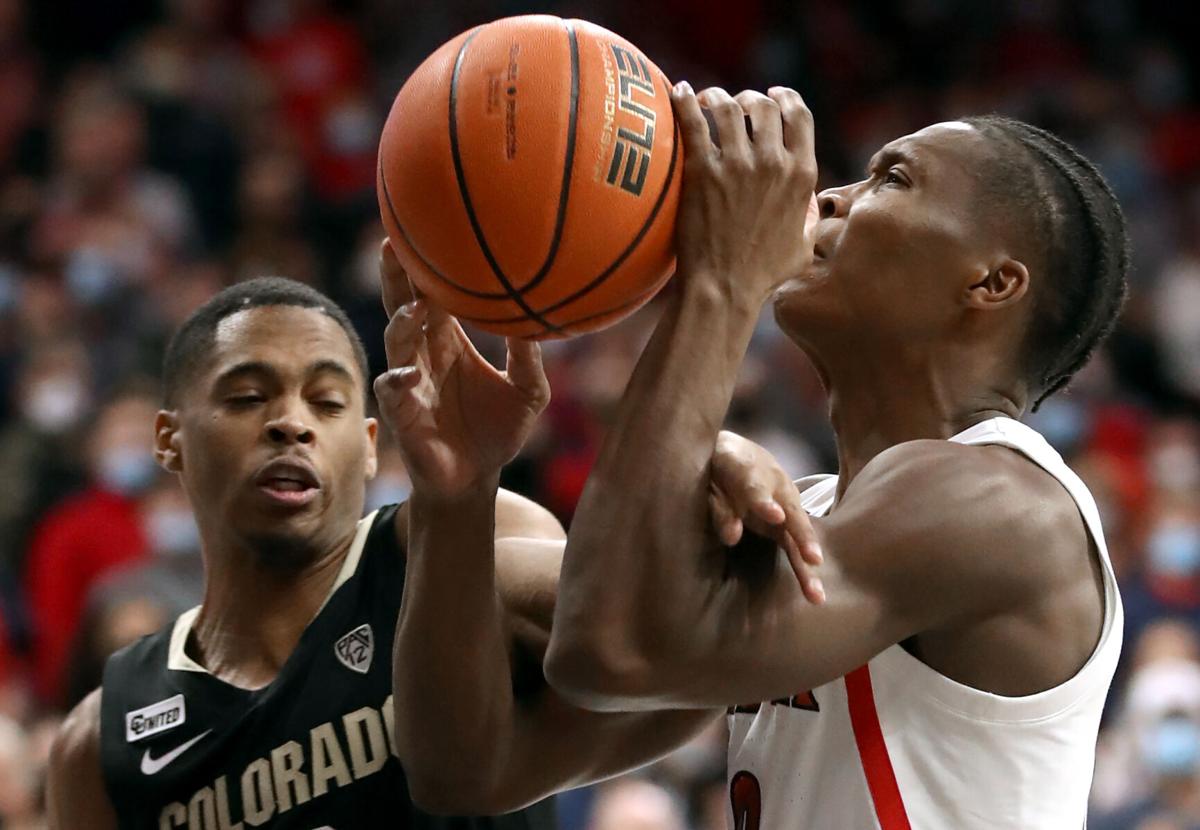 \Wildcats guard Bennedict Mathurin gets hacked by Keeshawn Barthelemy on his way to the basket on a fast break in Arizona's 76-55 win. 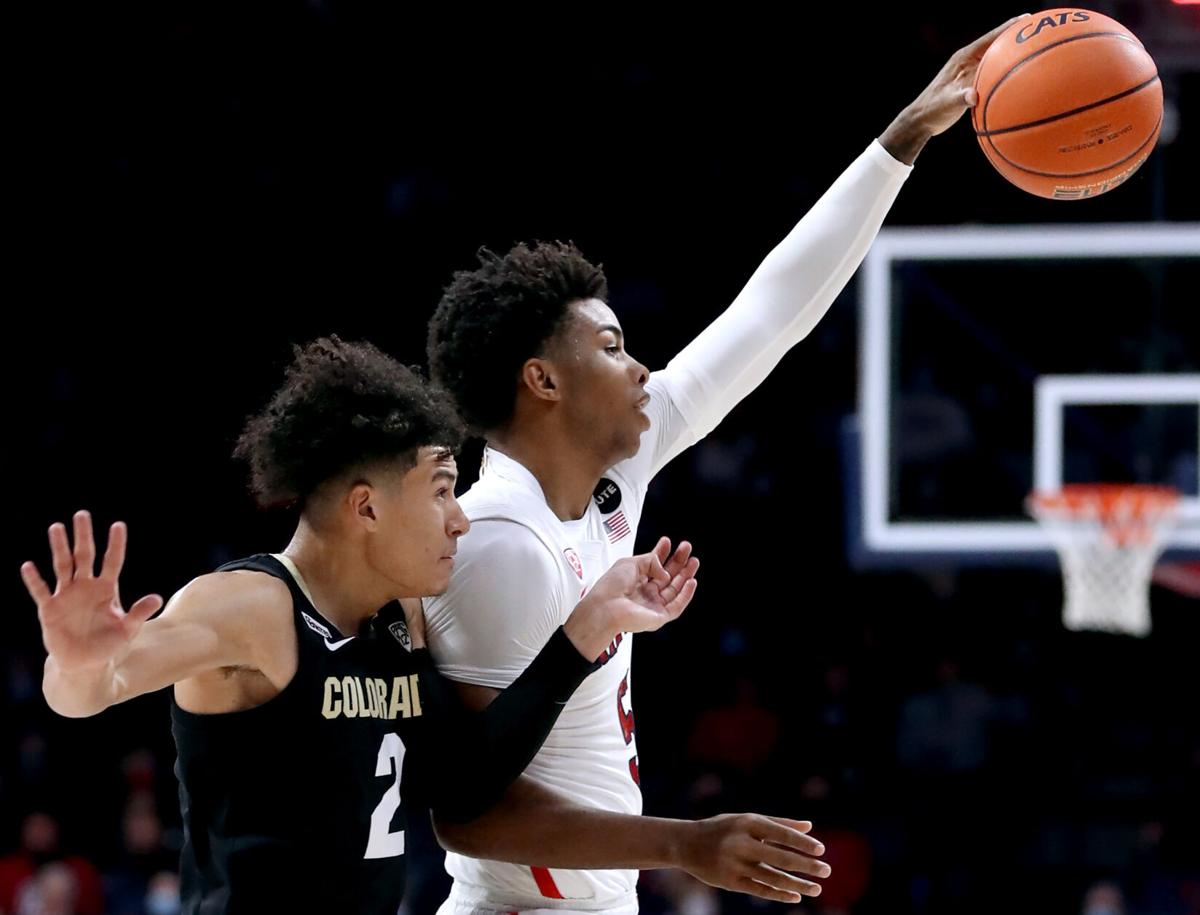 Arizona guard Justin Kier wins the race to a loose ball near mid-court against  KJ Simpson in the first half.