When five-star recruit Kylan Boswell opted last month to reclassify and enroll at Arizona a year early, the Wildcats — theoretically — received a high-level point guard to plug right into their 2022-23 rotation.

Doing so would alleviate the loss of backup combo guard Justin Kier while giving Boswell a head start to emerge during what would have been his freshman season in 2023-24.

Except the Wildcats are not counting on Boswell to be able to help significantly until at least midseason because of a broken foot suffered before he arrived in Tucson. Boswell recently underwent surgery to fix it, and UA coach Tommy Lloyd said he didn’t expect the guard to be fully available until after the season begins.

“I don’t want to put any pressure on him,” Lloyd said. “It’s gonna be hard. I mean, you’re coming off an injury, you haven’t played in a few months, it’s gonna be the highest level you ever played at before, he doesn’t know the system … there’s just a lot of things. I want to give him a nice little buffer, time to develop comfortably with it.”

In addition, Boswell just turned 17 in April, meaning he is expected to be one of the youngest players in college basketball when he begins playing next season.

But Boswell is also well-regarded and well-built — his childhood nickname was “Bam Bam” — so Lloyd also said there was no doubt he could help the Wildcats in the second half of next season.

“In the Class of 2023, he was probably the best point guard,” Lloyd said. “An elite point guard.”

Having finished academic work that will allow him to skip his senior season at AZ Compass Prep, Boswell is scheduled to enroll at UA later this month and in the meantime has been cleared to receive treatment at the school.

UA’s approach means Boswell’s recovery timeline could stretch slightly longer than that of junior guard Pelle Larsson, who broke his foot in the summer of 2021 and missed virtually the entire preseason last fall. Larsson returned to full practices in late October and played in all 37 games. He began to play more consistently in mid-January and finished the season strongly.

Larsson was also three years older than Boswell at the time of his injury, and had already played a part-time starting role at Utah as a freshman in 2020-21.

Between games, offseason workouts and never-ending recruiting, the college basketball calendar doesn’t leave a lot of windows for coaches to take vacation. But after the July recruiting evaluation period ended, the Wildcats’ staff managed to take a short break together in Puerto Peñasco.

Lloyd said most of the UA men’s basketball coaches and support staffers were able to go last week, except a few who had family obligations and assistant coach Ricky Fois, who has been spending the summer working with Italian national teams.

“We had a couple of condos, hung out on the beach and, yeah, it was just pretty kick-back,” Lloyd said.

While guard Kerr Kriisa is back in his native Estonia preparing for national team play in EuroBasket competition early next month, freshman Henri Veesaar is expected to leave the country this week to arrive at Arizona.

After spending last season in Spain with Real Madrid’s top junior club, Veesaar (pronounced VAY-sar) has been spending the summer at his home in Tallinn. He is expected eventually to play a key role at center or power forward.

“We’ve got to see where he’s at,” Lloyd said. “He’s obviously really talented. He looks skilled, he’s active, he’s got good energy and he’s been playing a good level of competition. So hopefully those things translate into him to be able to contribute this year.”

Veesaar’s arrival will allow him time to settle in briefly before fall semester classes start on Aug. 22, though Kriisa will have to begin the semester remotely before returning to Tucson in mid-September. Estonia has five EuroBasket games scheduled between Sept. 2 and Sept. 8, including an opener against Italy where Fois will be on the opposing bench.

“Kerr is a good student and he can take some classes online. He’ll be fine,” Lloyd said. “I’ve dealt with that a few times before when I was at Gonzaga and it works itself out.”

The freshmen both showed progress offensively. Lloyd said Anderson will still have to make defensive adjustments, in part because the Wildcats didn’t do much defensive work over the summer.

Borovicanin is nearly a year older than fellow European Adama Bal of France was when he arrived at UA this summer, but Lloyd said the Serbian freshman is still transitioning to a new school, new culture and new role in basketball.

“Filip has played on teams that, in a sense, have been built around him and his development a little bit,” Lloyd said. “So now he’s got to kind of learn how to blend with other good players. But he’s doing all those things willingly, and I think he really made progress this summer. I’m anxious to see how it looks to play out but ability wise, I don’t have any doubt that he can have an impact this season.”

Arizona’s nonconference schedule is expected to be completed soon with three additional home games against mid- or low-major opponents while the Pac-12 games are still being sorted out.

In December, UA will play at Utah (Dec. 1) and host Cal (Dec. 4), then travel to Las Vegas to play Indiana on Dec. 10 and host Tennessee on Dec. 17. The Wildcats also have home games tentatively scheduled against yet-to-be announced teams on Dec. 13 and 20.

The Pac-12 typically releases weekend pairs for games after Christmas sometime in the summer, followed by set dates and times for games once its television partners have decided what they want.

Shooters in both men’s and women’s games at McKale Center should have an easier time determining where to spot up for 3s next season.

As part of the annual resurfacing of the floor at Lute and Bobbi Olson Court, a darker shade was added to the area inside what is now the only 3-point arc.

The NCAA moved the women’s 3-point arc to match the men’s distance last season, but the rule had not been changed when McKale was resurfaced. There were two lines painted on the floor in 2021-22.

The Ducks had been expected to land Cook again after KJ Evans committed to Oregon.

Oregon reportedly moved ahead of Arizona over the past month.

"I put my résumé in and said, ‘Why not do what I can do to help them out this year?'"

The Wildcats clinched the Pac-12 title last season with a resounding win at USC.

The move means UA coach Tommy Lloyd won't have to face his son, Liam, who transferred from Grand Canyon to NAU in March.

After a mysteriously aborted 2021-22 season at Arizona, Kim Aiken is reportedly making New Mexico State his next stop.

Luka Doncic led Slovenia on a 17-0 run after Kriisa reportedly jabbered at the NBA All-Star.

Courtney Ramey will wear the No. 0 jersey that Bennedict Mathurin did last season.

Arizona target Cody Williams rises to No. 14 in ESPN class of 2023 rankings

UA commit KJ Lewis was not in ESPN's Top 100 though other major recruiting sites have him as a solid four-star prospect.

Anderson has spent more time in Tucson this summer than any other UA scholarship player, adding nearly 10 pounds to his 7-foot, now-240-pound frame. 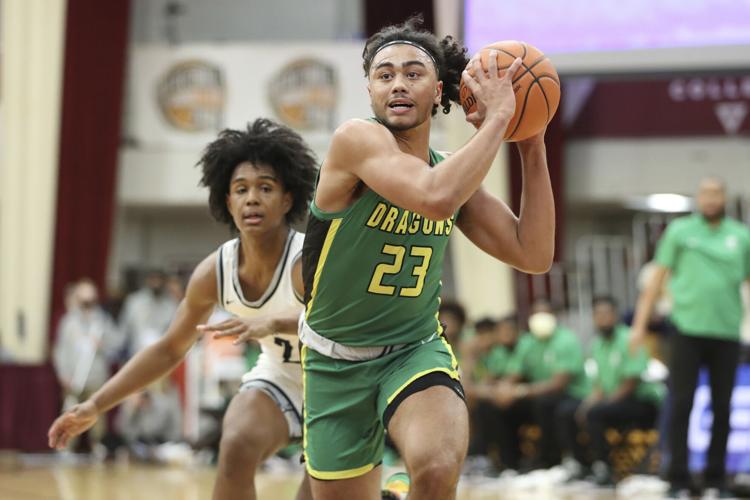 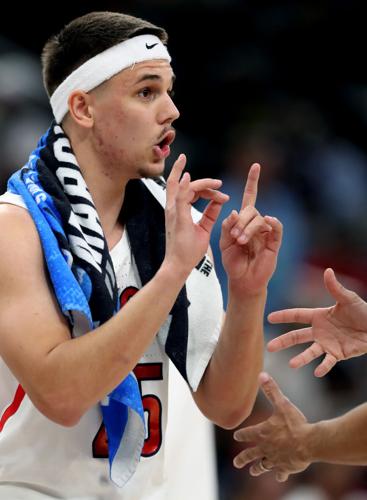 Kerr Kriisa is back in Estonia, where he will play in national team competition starting early next month.