The UA freshman said she will do whatever it takes to help the 11th-ranked Wildcats during their historic season, whether it’s playing a minute here and there or doing something even bigger.

“Whenever Coach Adia (Barnes) gives us opportunities, we have to use them — even if it’s like a minute, you have to go and show what you got,” she said. “Otherwise, how can they trust you with more time if you don’t prove with the little time you have?”

For Mote and other UA reserves, that time might be now. Mote played 17 minutes in Friday’s 85-69 win over Utah as star guard Aari McDonald watched from the bench with a lower leg injury.

A UA spokesman said Saturday that McDonald, who moved around on a scooter before Friday’s game and wore a boot during it, remains day-to-day. The UA takes on Colorado (15-11, 4-11) on Sunday at noon.

It was more than enough for the Wildcats, who won their fourth straight Pac-12 game. With a win Sunday, Arizona (22-4,11-4) would secure at least fourth place in the Pac-12 and earn a first-round bye in the conference tournament. The UA will host No. 4 Stanford and Cal in the final weekend of the regular season.

“Mara has a chance to be special,” Barnes said. “She can shoot the ball. She can handle it. She is a good defender. She’s just got to give it time and keep on working and getting Pac-12 experience. She’s going to be a good player.”

It’s impossible to understand where the freshman guard is today without looking at her past. Mote came to the UA program off a strong showing in the U19 World Cup for the Junior Latvian National Team. She averaged 10.9 points, 4.6 rebounds, 2.6 assists and 1.6 steals per game as Latvia won four games.

Mote contributed right away at the UA, earning minutes and gaining trust and confidence of her teammates and coaches in nonconference play. At the end of November, Mote really started to find her groove — she was named player of the game after scoring 12 points in a win over UC Riverside.

Then she injured an ankle.

“I got back right as the Pac-12 started, and I think it’s the toughest conference to play,” she said. “We had four top-10 (opponents), and then we were ranked, and it was kind of hard to get into that.”

With McDonald, Sam Thomas, Amari Carter and Lucia Alonso in front of her, Mote knows she has to use any edge she can to earn minutes. So she watches Carter and Thomas on defense and goes to Dominique McBryde for tips on how to get open shots.

She’s also putting in extra time on her off days shooting in the gym.

That extra push is working, and her touch seems to be back. She knocked down a 3-pointer from the top of the key with no hesitation in the first quarter of Friday’s game. She had a highlight-reel moment in the second quarter, driving to the basket and dishing to Thomas, who hit a 3-pointer.

In practice, she’s been focusing on her defense.

“I see myself as a defensive player,” Mote said. “Even before the UCLA game, (assistant) Coach Salvo (Coppa) came up to me and said, ‘Be ready, learn this scout, learn the best players, because we’re going to give you time, you’re going to come into the game, and you’re going to defend them.’ And I was like ‘OK, that’s my job. I can do it.’ So, right now I’m taking pride in that and trying to be more and better.”

Mote is not the only Wildcat who has improved. The freshman said she is constantly impressed with what her team has been able to accomplish.

“This is actually more than I expected,” she said. “We’re No. 11 right now — I didn’t think we would be that in the beginning of the season. We knew we were capable of doing it, but not that quickly.”

No. 11 Arizona at Colorado, noon

No. 21 Arizona State at Utah, noon

Arizona's Cate Reese is stepping up as a sophomore, and the women's basketball world is noticing

Thanks to a great work ethic and constant improvement, Arizona softball player Malia Martinez has put it all together

"I can't think of anyone that I'm cheering more for than Malia Martinez to have a great year," said UA coach Mike Candrea.

Helena Pueyo, Arizona Wildcats light it up from deep to notch 20th win

Tucson's Alex Bowman on Daytona crash, his new car and how he's preparing for Sunday's race in Las Vegas

The Ironwood Ridge High School graduate talked to the Star Friday about his thoughts going into the season, his home track in Phoenix and some childhood and hometown memories.

Falcons advances to face Flagstaff, which outlasted Salpointe Catholic in Saturday's other semi.

Top-seeded Blue Devils will play Tuesday night for a shot at their second consecutive state championship.

Cowboys relish chance to ride Saturday, knowing that Tucson Rodeo finals are just a day away

Competing in the final performance of La Fiesta De Los Vaqueros on a Saturday is a lot like batting in the bottom of the ninth inning or having one last two-minute drill with the game tied or being last to act in a hand of five-card stud.

Payton Pritchard makes his case for Pac-12 POY, Bill Walton plays with the band and Channing Frye must wear green

Seen and heard from McKale Center, where 14th-ranked Oregon outlasted the Arizona Wildcats 73-72 in overtime.

Ex-Arizona Wildcat Ayton has 28 points and 19 rebounds for Phoenix.

The 24th-ranked Wildcats lost to No. 14 Oregon because they shot 10 for 21 from the foul line, a season worst. And they lost because they didn’t score in the final 3:40 of regulation, wasting a 64-58 lead.

Blake Paugh drives in all three runs in 3-2 win over Cornhuskers.

Without Aari McDonald, No. 11 Arizona Wildcats lose 50-38 at Colorado

UA star Aari McDonald to participate in Senior Day, but will wait to decide whether to enter WNBA draft early

Arizona's star guard wants to "walk" with fellow transfers Dominique McBryde and Tee Tee Starks on Sunday. As for leaving school early? "There isn't a decision yet — that will be her decision to make, but not for a while,” coach Adia Barnes says.

UA junior has missed the last two games with what the program called a "lower-leg injury."

The electric, tenacious McDonald leads the Pac-12 with 2.5 steals per game, and is second among active league players in steals. 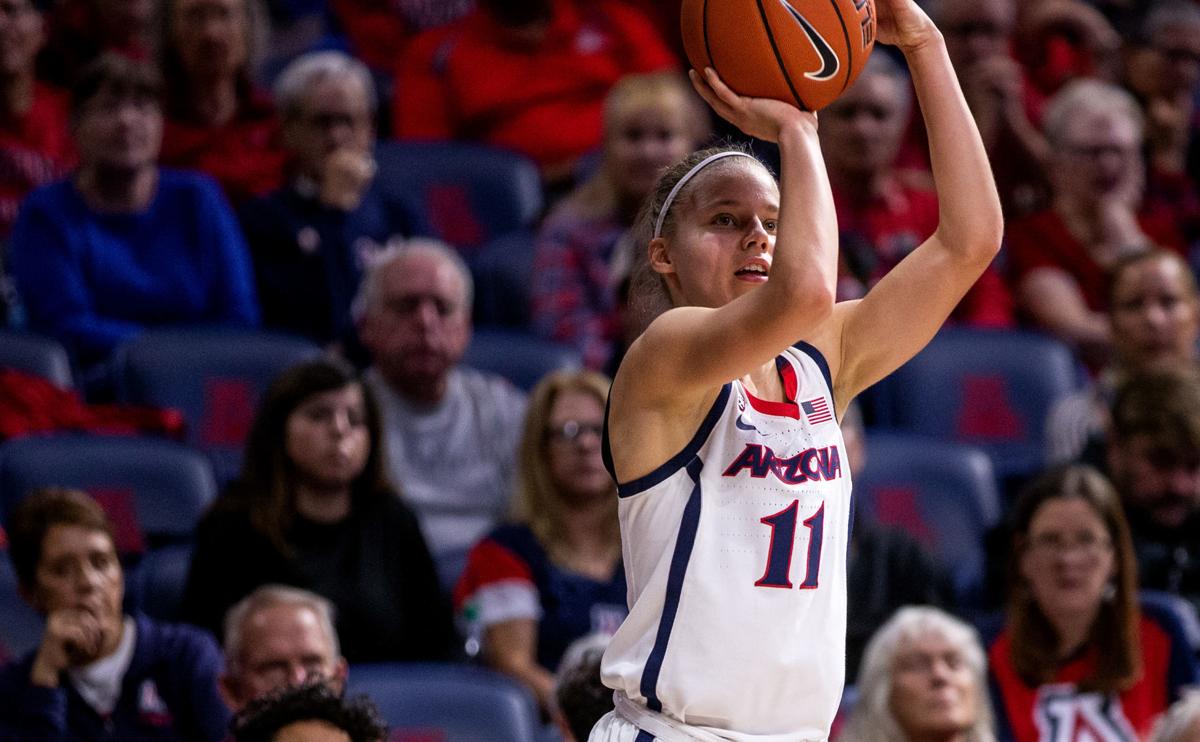 Arizona freshman Mara Mote came to the UA after a strong showing in the U19 World Cup for the Junior Latvian National Team. 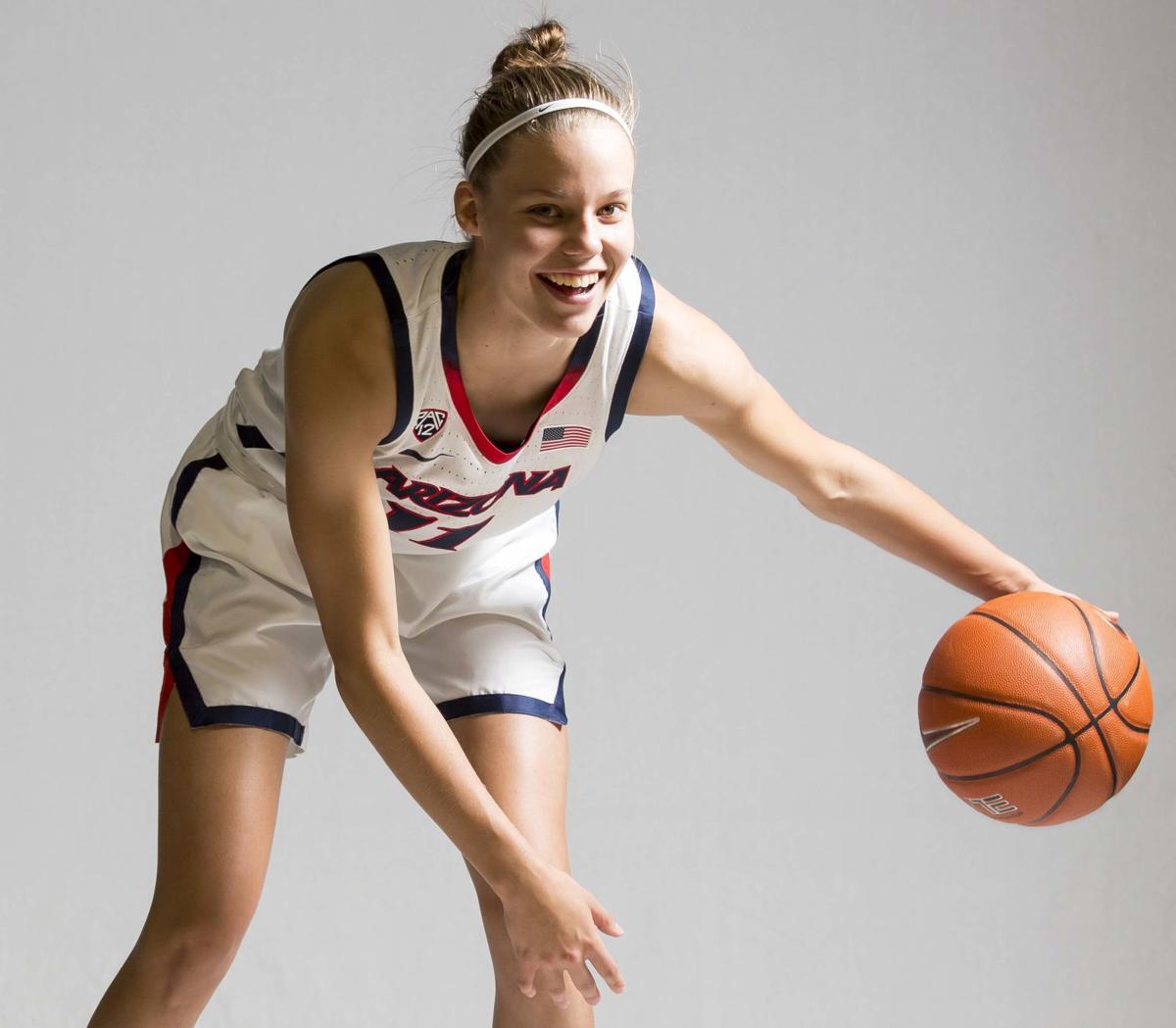 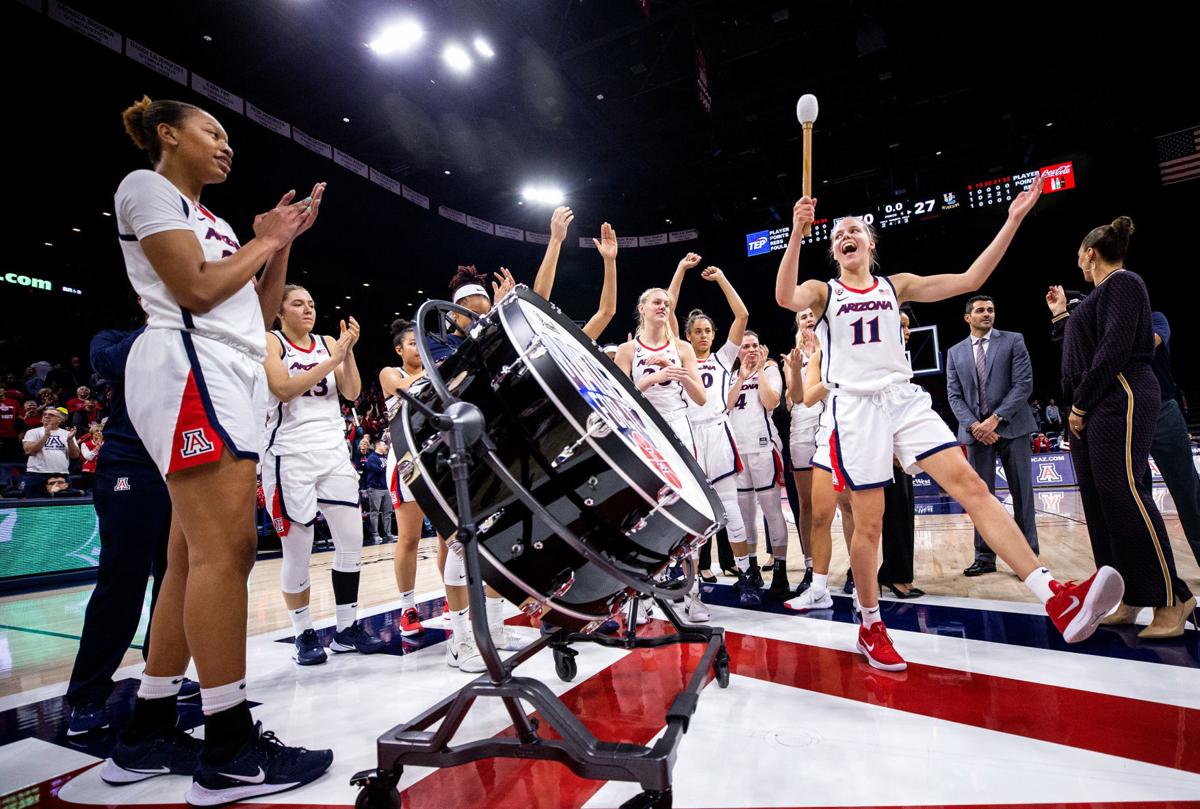