Ex-Cat Georganne Moline won the hurdles event at a virtual track meet. She said it felt 'so natural.'
Share this
1 of 3 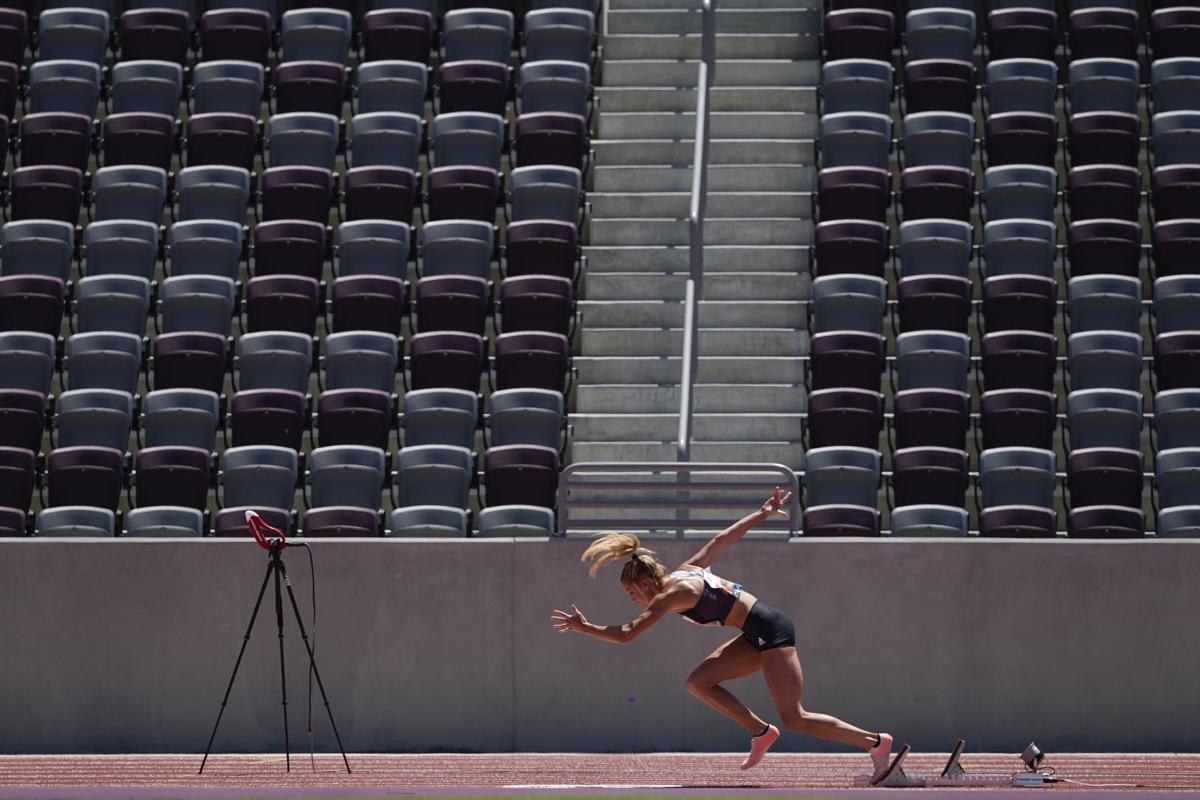 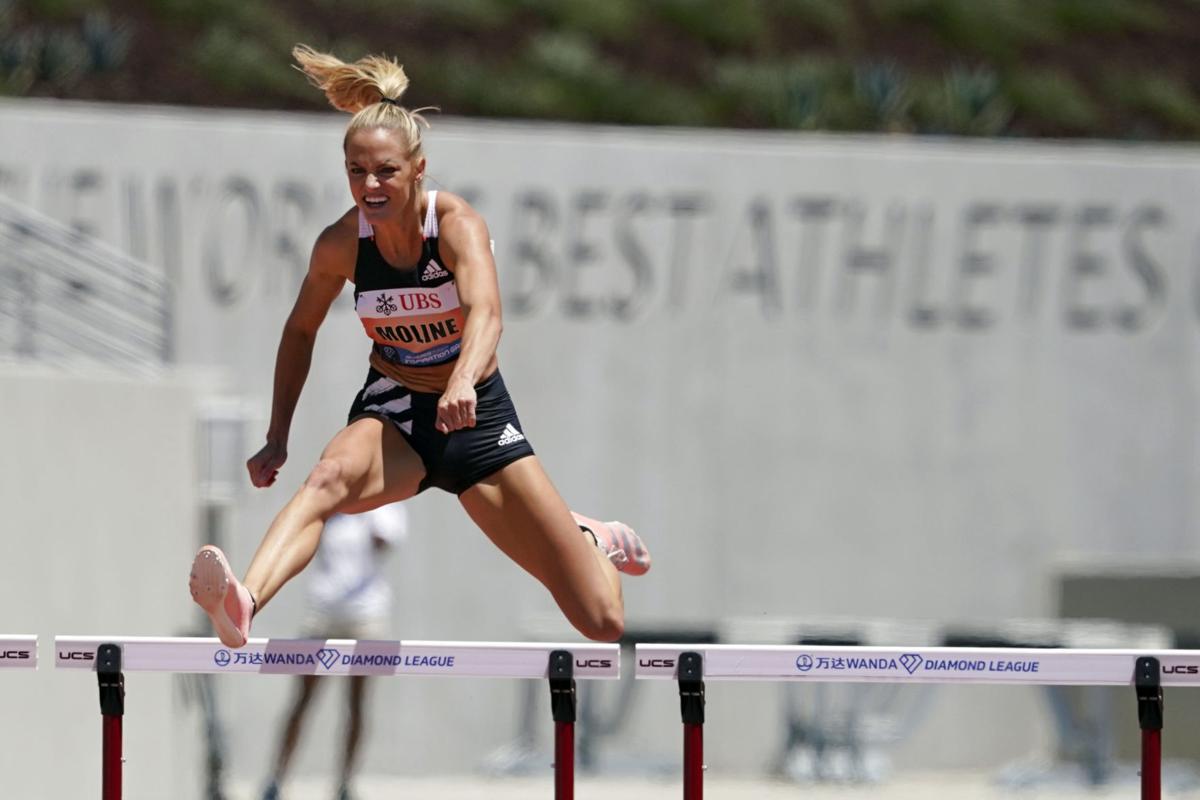 Georganne Moline, competing in the 300-meter hurdles at the Weltklasse Zürich Inspiration Games on July 9, said she has learned during recent down time. 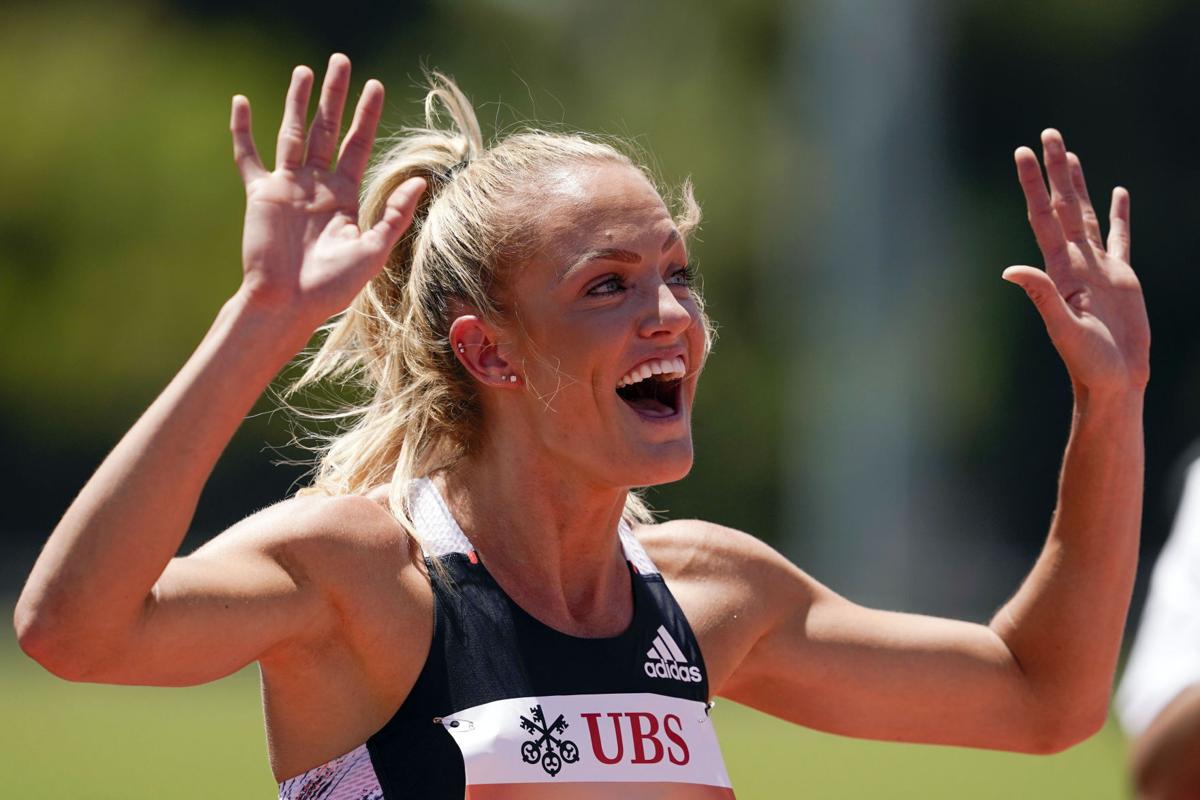 It didn’t faze her that she was participating in an unusual virtual event and racing against others located around the world.

Or that a drone would be following her as she ran.

Or that the starter’s pistol would go off in Switzerland and not at the Mt. San Antonio College track she was racing on.

“It was so natural,” Moline said. “I really liked running by myself. If I was in a race with people anyway, I would focus on myself. I’d be like, ‘Hey, Georganne, yes, you have to compete, but you got to run your race.’ Coach Harvey always said that ‘don’t you worry about them’ — to an extent, you want to race (others), but especially the first five hurdles you just do you. So what better way to just do you then just run by yourself? It was just me against myself and against the gun.”

Moline’s time of 39.08 seconds at the Inspiration Games was the perfect way to announce her return to competition after she underwent foot surgery a year ago. Moline last competed in the hurdles two years ago; it had been 18 months since her last competition of any kind.

Moline, 30, was cleared to train in January.

“I think it was built for her, because not running in a year and a half, to be thrust into a competition head to head with a lot of these athletes, it could be a little daunting,” Harvey said. “It was just a perfect situation to give her an opportunity to be able to perform with less pressure and see where we’re at.

“I’ll be the first one to tell you — and she’ll tell you as well — she ran really well. She ran the fastest time in the world and one of the top 10 times all time. But, she wasn’t close, quite frankly, to what she was capable of running at that time. There was a moment of self-doubt off one of the hurdles, and she made a change. ‘Woulda, coulda, shoulda, I can’t.’ But had she been clean (at the hurdle) all the things that we’ve done in training sessions very much indicated that she was fit enough to run a world record during that time.”

The Inspiration Games were created by the organizers of Weltklasse Zurich, the annual world class track event held in Switzerland.

Rather than cancel their August event, they re-imagined what a meet could look like in the age of coronavirus. Organizers used a coordinated video system, intricate timing and a three-way split screen for TV viewers to see the athletes as if they were competing side-by-side in the same place.

The Inspiration Games included seven events, each of which included three athletes.

The results of each event were announced shortly after they were filmed. Moline said she knew she had done something special.

“When I was done, I knew — I know that feeling,” Moline said. “I know I gave it my all, and Coach Harvey has always said my all is always enough in whatever sense that means. Whether that means I win or I don’t win, it was going to be enough for me anyway, so whether I got third, I still knew that I did what I could do that day. That is what I needed to show that everything I’ve done this last 18 months.

“She’s special,” Harvey said. “I’m not saying anything that the world doesn’t already know. There are certain human beings on earth that are so predisposed to doing certain things. Her body type, her ability to be able to sprint and to be able to hurdle, (it’s) really unlike a lot of folks. There’s not even a question in anyone’s mind how good she is.

“The No. 1 thing with Georganne in terms of being able to truly achieve all the goals that I think she’s capable of achieving, really is her ability to be able to see it, but not just see it, but really believe it.”

Said Moline: “Coach Harvey has changed my life, and I will be forever indebted to him.”

Moline has been plagued with multiple injuries during her career, many of them the result of bunions. In 2017, she fractured her second and third metatarsal in her foot. Last year, she suffered a plantar plate tear in her second toe. It took her a while to find the right doctor and the right procedure to fix it.

Unable to run, Moline took the time to work on other aspects — such as sleep, her diet and mental health.

She came back stronger.

“A couple of years ago — one of my last injuries — I was telling a friend of mine who is a former hurdler, ‘Oh, I’m injured and I have to sit out,’” Moline said. “She said ‘Let’s be real, Georganne. You’re the person that gets injured and comes back even better. That’s what you’re known for.’

“Then it hit me: When those injuries happen, or if I have a setback, or I fall in a race … we’re not just going to sweep it under the rug and just say, ‘I don’t want to think about it.’ No, let’s think about it. Let’s think about why it happened. Let’s think of what I can learn from this thing, how I can grow from this. This is happening for a reason, and I refused to let this take me down.”

That kind of attitude is serving Moline well as she navigates her return, the COVID-19 pandemic and, well, life in general. Moline says track has taught her how to handle adversity.

“It’s taught me so much about how I can say so many things about myself like, ‘Wow, I’m so resilient.’ Yes, in track, but if life throws me something like coronavirus, yeah this (stinks) for everyone, but this doesn’t feel like uncharted territory,” she said.

“This doesn’t feel unfamiliar to me. Through track … I found all these characteristics about myself and who I am. Track is just highlighting these things about me and it’s shaping me into who I want to be for the world for after track. And I think that’s just so cool. Sport has taught me more than I think I could have ever learned if I didn’t do it, because it seems like I’m the girl that gets injured, I’ve fallen over hurdles — some of the most unfortunate things and I’m so grateful for them.

“That’s why I love track, and I love that. It’s given me a little platform where I can talk to young women about ‘I was never the fastest; I was that girl that even came into college and I get the pity clap in workouts and ‘Come on, Georganne, you’ve got this.’ …

“And I want to show girls that life is throwing you all these curveballs, but embrace them, because you are going to surprise yourself.”

Lebron James changing his number because of Space Jam

Lebron James changing his number because of Space Jam

Why is the NFL expanding from London and Mexico to games in Germany?

Why is the NFL expanding from London and Mexico to games in Germany?

Greg Hansen: Pac-12 players' manifesto could prove to be start of needed overhaul

Not all the demands will be met, but players have long deserved a bigger voice in how collegiate sports is run.

“I live on my own and I decided I didn’t want to be on my own during a time like this — I wanted to be with loved ones,” Watson said.

When she left Georgetown two years ago, Shannon Meisberger had options. Her decision to choose the University of Arizona is paying off.

Pete Barnes, who died in Tucson in 2018 from Alzheimer’s disease and other health issues, played both baseball and football at Southern University. The Los Angeles Dodgers took Barnes in the sixth round of the 1965 amateur draft, but he chose football instead. He went on to play linebacker for the NFL's Chargers, Oilers, Patriots and Cardinals.

The coach says she understands why the league opted to move games to January at the earliest — even though it means another delay for a Wildcats team that on the verge of a breakthrough.

Wildcats women open to bubbles, mini-bubbles and other options if it means playing hoops season

More news and notes from around the UA women's basketball program, including Lauren Ware's big decision, Adia Barnes' post-pregnancy plan and what the 2020-21 season could realistically look like.

Arizona's fourth-year motivated his team during a summer that included a book club, film — and long-delayed oral surgery.

Georganne Moline, competing in the 300-meter hurdles at the Weltklasse Zürich Inspiration Games on July 9, said she has learned during recent down time.