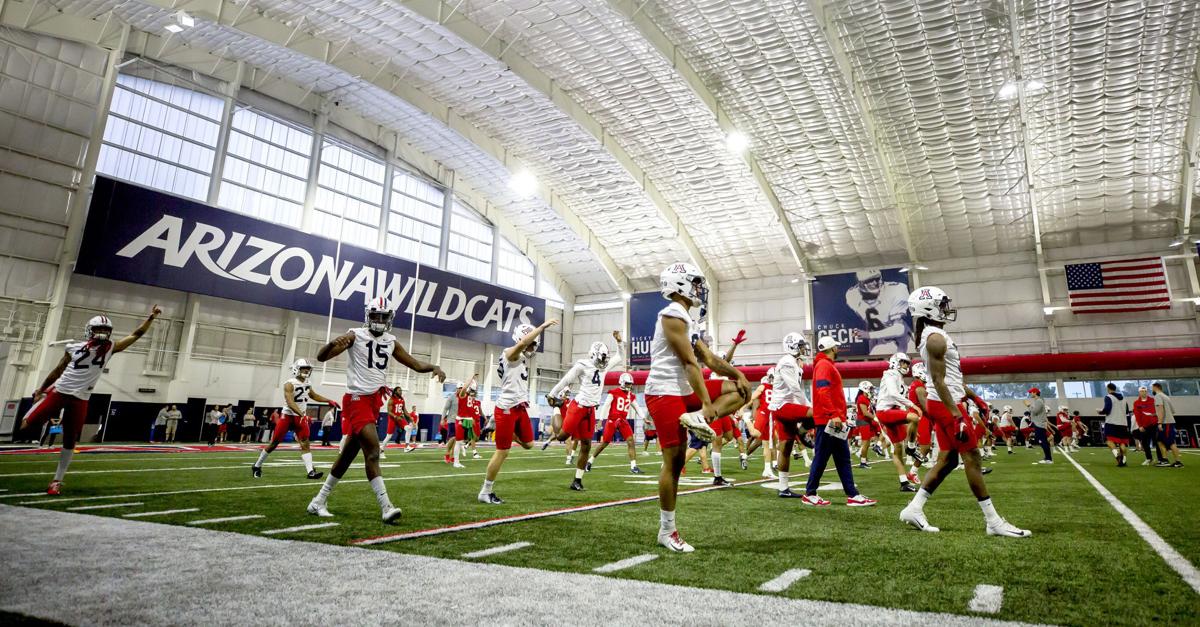 UA’s group warmups like this one in March won’t be seen until further down the line, as more players are added each week. 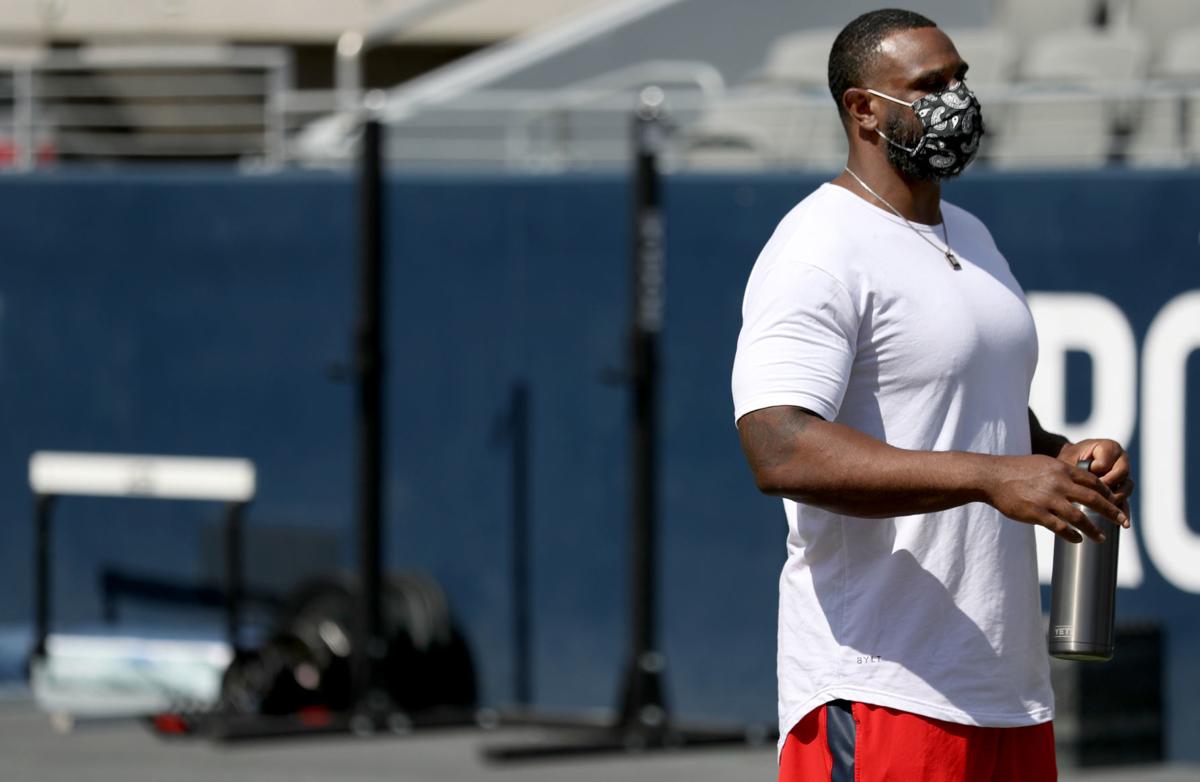 UA football strength coach Brian Johnson talks about the measures being taken to return the team to workouts in the face of COVID-19 as he stands near several workout stations along the perimeter of Arizona Stadium’s field. The first group of UA football players return Monday.

While the growing number of college football players testing positive for coronavirus is a cause for concern, one expert says the 2020 season is far from doomed.

But these positive tests at the onset are exactly why schools are doing testing up front, and aren’t at all unexpected, said Dr. Rand McClain, a Southern California-based physician specializing in regenerative and sports medicine.

In fact, McClain said, if student-athletes follow the protocols put into place by their schools, they’ll actually be more protected than the general public.

A few weeks ago, 20 Arizona Wildcat football players resumed voluntary workouts, with the rest of the team being phased in each Monday and the whole squad set to be assembled by July 6.

The players are being split into pods of 10 and will maintain at least 6 — and ideally 15 — feet of separation at all times, train outdoors or in open-air environments and wear masks during all activities, including exercise. During the first phase of the University of Arizona’s return-to-play plan, there will be minimal use of equipment and no shared spaces, including locker rooms.

The streak of positive tests coincided with a warning from Dr. Anthony Fauci, the U.S.’s leading infectious disease expert, that football may not be possible this fall unless players are isolated in a “bubble” set apart from the general public.

McClain contends that the situation will likely be a little discouraging at first, as positive tests continue to roll in, but that he expects there to be a season, although one with some asterisks in the record books.

“What did we expect? These are people that haven’t been on campus and we don’t know to what degree they’ve been following social distancing protocol,” McClain said, adding that this is the reason schools are doing testing as soon as players return to campus.

“After that, it comes down to execution. And when you talk about colleges, you’re talking about for the most part, teenagers.”

The difficulty will be in getting student-athletes to adhere to the protocols. In the case of LSU, at least 30 players were quarantined after either testing positive or coming into contact with infected individuals, with some players having been found to have visited popular campus bars.

“What needs to be stressed is to remind them it’s not about them,” McClain said. “And if the average person in public can follow (safety protocols) and stay safe, players should be able to, too.”

Once scrimmages begin, shortcomings in protocols or players adherence to them will become clear.

“There should be no surprises if people are following the rules,” McClain said. “I think once we get start and get through the initial screenings, as long as players and staff follow the rules and combined with frequent testing, we should be able to complete a season.”

While infection rates are climbing, especially in younger populations, the upside is that the death rate is consistently lower, McClain said. And while a small number of people who don’t have underlying health issues are becoming extremely ill when infected, for the most part, symptoms amongst people who are otherwise healthy have been mild to moderate, according to McClain.

“And athletes are the healthiest of groups,” he said. “But it’s still important to make sure that coaches are advising players to not overtrain, which can weaken the immune system, to eat nutritiously, limit alcohol and get adequate sleep.”

And looking out for players’ mental well-being is especially important when talking about playing games with no fans in the seats, which McClain thinks will be one of the most interesting aspects of the season.

“Particularly at the collegiate level, athletes have confessed that that’s a big part why they play the game. They literally depend upon the crowd noises and the risk of being booed and cheered on,” McClain said.

“It’ll be interesting to see how athletes adapt to that.”

And while it may be a new technique to current college players, there’s already a tried-and-true method for how to prepare for this situation: Turn inward and visualize winning.

“It’s been around for a long time and it’s very effective,” McClain said, adding that the method has been practiced since the 1970s. “The locker-room talk has got to change a little bit, but coaches can certainly teach these guys about these techniques.”

And after a spring filled with throwback and barebones workouts, as gyms across the country were shuttered, it only makes sense that the sports world would return to another technique from yesteryear.

But it’s important as players get back into formal workouts and the use of specialty equipment, they remember to not push themselves too hard.

“They have to remember that some tendons, ligaments and muscles haven’t been exercised the same as before,” McClain said. “Unfortunately, just by the nature of it and the odds, we’re probably going to have more injuries.”

With state school systems and individual universities having different sets of protocols and different plans on how to handle positive tests, things could get complicated if players test positive after the season has started, which McClain thinks will translate to asterisks in the record books.

“Everyone will have a different approach and it will effect everyone else, because rankings are based on playing other teams,” McClain said.

“If a higher-ranked team goes into quarantine when you’re supposed to play them, that will affect your record.”

Still, despite all the unknowns and complications that have already arisen, McClain is confident that college football can and will happen, provided players stick to the protocols.

“This has to be given to the players as, ‘This isn’t just about you.’ They have to look at it as one more challenge,” McClain said. “But I think we’re going to pull this off and after the early going, there won’t be too much gnashing of teeth.”

On Monday, Wildcats will 'start small and slow' with football players' return to campus

Student-athletes will be split into groups of 10, subjected to daily wellness checks, wear masks while working out and more under the University of Arizona athletic department's re-entry plan.

An in-depth examination of the Wildcats’ ‘fluid and flexible,’ multiphase plan to bring football players back to campus for voluntary workouts.

Shutdown could be perfect time to make positive, much-needed changes in youth sports

Experts convened in an ASU Global Sports Institute webinar earlier this month to discuss the future of youth sports post-coronavirus and how to address issues including lack of diversity and access to play.

After months of uncertainty, Tucson Youth Football and Spirit Federation to move forward with 2020 season

The Tucson Youth Football and Spirit Federation will be going ahead with a Sept. 5 season start, with officials saying, "If high school is going to play, and there’s going to be school, we’ll have a season."

Niall Logue signed with FC Tucson in January but didn't arrive to town until May 22, after spending months under quarantine in Ireland.

'It's like teaching a dog martial arts': Tucson trainer says sport of Schutzhund is a life-saver for people, their pets

JJ Belcher rode bulls until an injury knocked him out of the sport. Years later, he helps coach Tucsonans and their dogs in a very different kind of sport.

The federal lawsuit accused the University of Arizona of exercising "deliberate indifference" in its handling of dating violence allegations against a now-imprisoned former football player.

Bugel went 20-44 as Cardinals coach from 1990-93. He was also the architect of “The Hogs,” the Redskins' offensive lines that led the team to three titles.

The one-year deal is worth up to $7.5 million with incentives, ESPN reported Sunday night.

TYFSF cancels season, but athletes may still have chance to play in '20

Tucson Youth Football and Spirit Federation canceled its 2020 season Monday, but several associations are still trying to come up with contingency plans to allow kids to participate in the fall.

Too tall for gymnastics, Christiana Williams found the pool to be a perfect replacement

With help from the city, Tucson's Covaughn DeBoskie-Johnson is training next generation of athletes

Dig Deep Athletic Academy is personal for Covaughn DeBoskie-Johnson, who played collegiately at Cal and Northern Arizona before returning home and finding his passion.

UA’s group warmups like this one in March won’t be seen until further down the line, as more players are added each week.

UA football strength coach Brian Johnson talks about the measures being taken to return the team to workouts in the face of COVID-19 as he stands near several workout stations along the perimeter of Arizona Stadium’s field. The first group of UA football players return Monday. 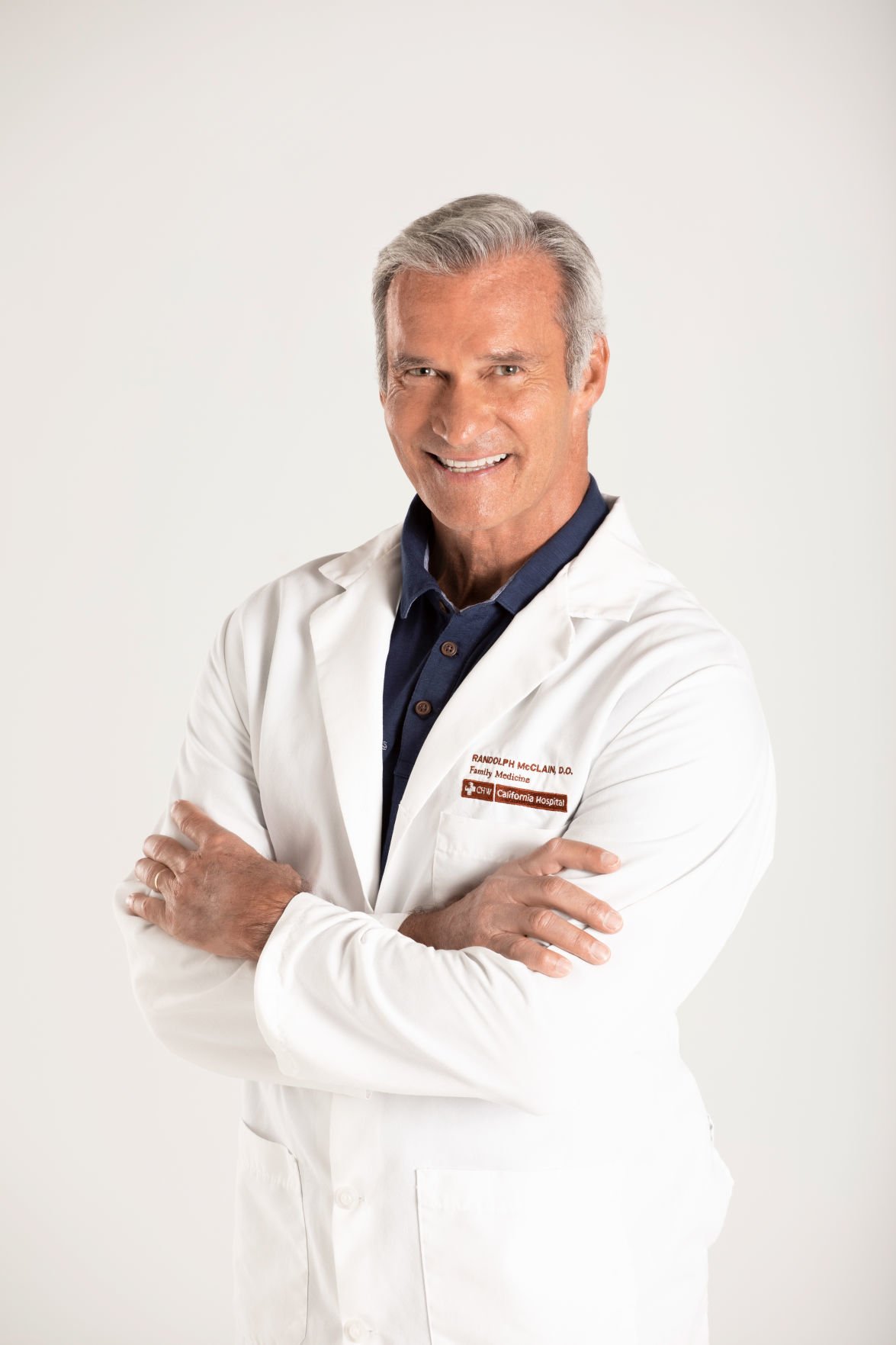