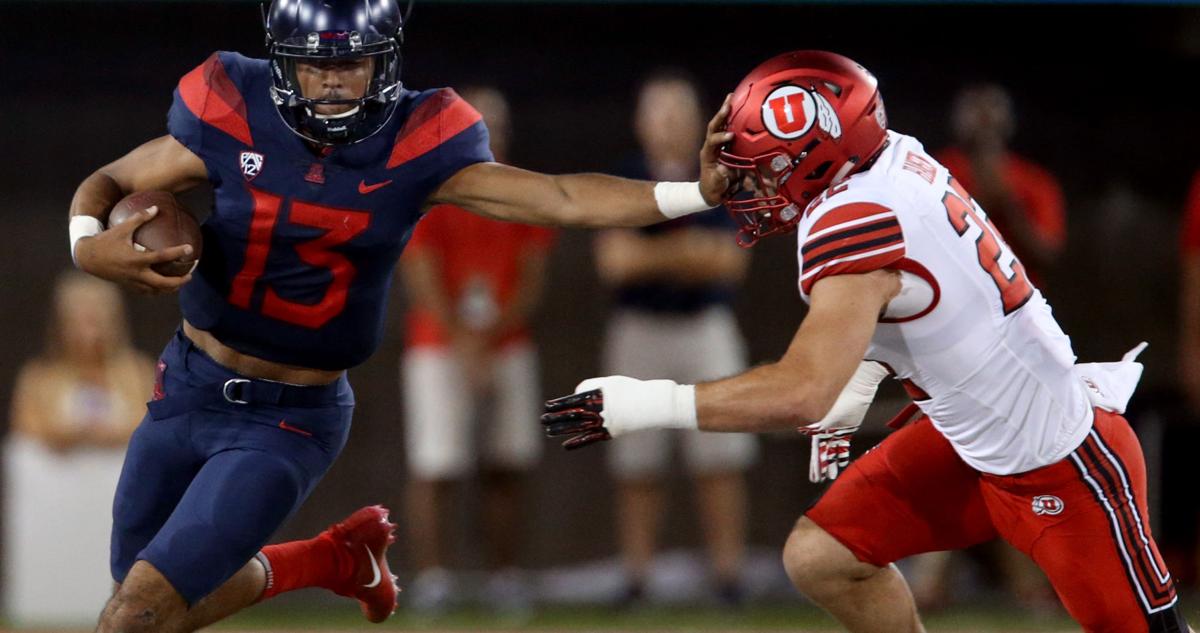 QB coach Rod Smith called game management part of the development at the position. Brandon Dawkins, left, has been inconsistent through the Wildcats’ 2-2 start. 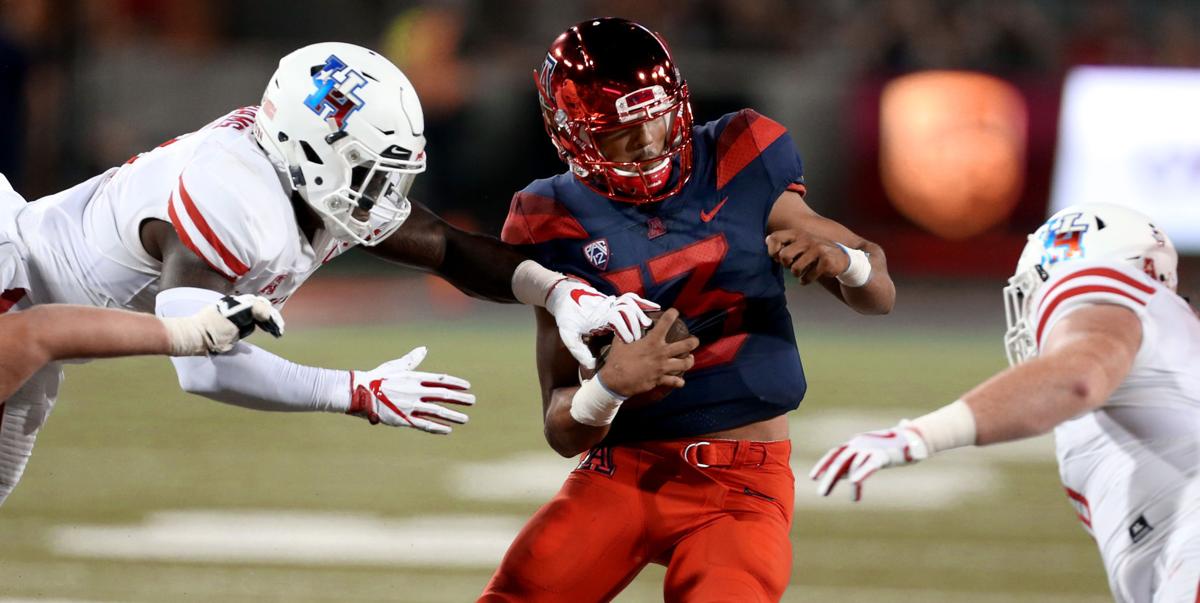 Quarterback Brandon Dawkins, center, is a threat to go the distance every time he gets into the open field. But he also has made his share of mistakes during the UA’s 2-2 start.

Arizona Wildcats quarterback Brandon Dawkins has his share of detractors. Much of the criticism, particularly about his accuracy as a passer, is valid.

But it’s inaccurate to portray Dawkins as turnover-prone. The three interceptions he threw against Utah on Sept. 22 marked a career high. They were his first picks of the season. Only twice previously had he thrown two interceptions in a game: against Utah last year and against Arizona State in 2015, his first extended playing time as a collegian.

Dawkins generally has managed games well. The Utah game — a six-point loss in which he also fumbled — stands as the exception.

But taking better care of the ball — a basic tenet of football since its birth — has been a huge point of emphasis for Dawkins and the Wildcats since the Utah game ended and preparations for Colorado began.

“We have to value the football to the point where you understand, that is our program,” Rod Smith, Arizona’s co-offensive coordinator and quarterbacks coach, said Tuesday. “You are holding the program in your hands. You don’t carelessly let that thing go.”

What Smith and Rodriguez want Dawkins to avoid is making a bad situation worse.

“We don’t need to make it a bad, bad play by a wrong decision or poor fundamentals,” Rodriguez said.

That’s where it all starts for Smith — fundamentals. The Wildcats spent the bulk of their bye week working on the basics.

Dawkins completed a career-high 24 passes against the Utes, but it took a career-high 42 attempts to get there. Many of his misses were high.

Smith compared passing to shooting a basketball. When you’re struggling with your shot, he said, you head to the foul line.

“You start all over,” Smith said. “If you’re not in a rhythm (as a quarterback), you go back to the free-throw line per se.

“It all starts with those guys having good technique, good timing. And it goes from there.”

Dawkins and his fellow quarterbacks worked on a different sort of three-and-out — dropping back three steps and getting the ball out of their hands. Receivers worked on making sure they hit their marks on 5- and 10-yard routes.

“I can tell from the last couple weeks that we’ve gotten more in the flow and everybody’s starting to (get) on the same page,” tight end Trevor Wood said. “That’s something we’ve really focused on. I think you’ll see it’s come together.”

The proof lies in the play, of course. Dawkins’ performance has been inconsistent. As he goes, so goes Arizona.

Dawkins did not turn the ball over and rushed for multiple touchdowns in lopsided victories over Northern Arizona and UTEP; he committed multiple turnovers and missed some makeable throws in close losses to Houston and Utah.

The coaches can live with the occasional missed pass. Unnecessary turnovers that lead directly to points are another story.

Dawkins’ mishandling of a snap deep in UA territory led to a safety against Houston — the Cougars’ only points in the second half of a three-point game. His forced throw late in the third quarter against Utah resulted in a pick-six.

Rodriguez stressed that he doesn’t want Dawkins, or any of his quarterbacks, to “play scared” or be “afraid to make a play.” But they have to be smart and have a sense of situation.

No one was open on the interception that the Utes returned for a touchdown. Arizona had the ball at its 12-yard line. The Wildcats trailed by three points. A sack and a punt wouldn’t have been the worst outcome.

“It needs to be better decision-making on Brandon’s part,” Smith said. “When that play is broken, I can’t force it. That’s where we as the quarterbacks have to handle the ball better. I gotta understand when a play’s good and a play’s not good.

“That’s game management. That’s part of the quarterback development. But he’s been here long enough that those are the mistakes that he can’t make.”

Rodriguez has made it clear that Dawkins is Arizona’s starting QB. But the staff wants the other quarterbacks to push him, and the return to health of backup Khalil Tate should help in that regard.

Tate hurt his throwing shoulder in the Sept. 2 opener against NAU. He played in the fourth quarter against Houston the following week but was limited in practice until the bye.

Tate’s return gives Rodriguez an experienced alternative should Dawkins get hurt or struggle against Colorado.

“We want competition,” Smith said. “It doesn’t matter if it’s Game 1 or Game 10. Hopefully we have enough depth at every position where they’re constantly competing – that nobody feels comfortable.

“We don’t want them ever looking over their shoulder, thinking if I make a mistake I’m going to get pulled. That ain’t the case. But you don’t want them getting stale. We want to make sure we’re constantly getting better at our craft.

Greg Hansen: Arizona football win at Colorado could change everything

As the Wildcats return to action this week, Greg Hansen and Star sports editor Ryan Finley dive into what a win at Colorado could mean for Ari…

The former Salpointe Catholic standout's football career appears to be over because of a foot injury.

The 6-foot-3 Adams becomes the second receiver to join the UA's class of 2018.

The pass rusher is expected to make his season debut against the Buffaloes on Saturday.

Colorado’s plight familiar to Arizona Wildcats, who aim to keep Buffaloes from bouncing back

The past season-plus for CU looks an awful lot like Arizona circa 2014-15. The Cats rose, fell and haven’t gotten back up; will the Buffs follow suit or buck the trend?

Three things to keep an eye on as the Cats face the Buffaloes in Boulder.

Observations from warmups before the Cats-Buffaloes game at Folsom Field in Boulder.

Backup QB did more than just steal a road win Saturday; he sold tickets and hope to fans desperate to believe.

QB coach Rod Smith called game management part of the development at the position. Brandon Dawkins, left, has been inconsistent through the Wildcats’ 2-2 start.

Quarterback Brandon Dawkins, center, is a threat to go the distance every time he gets into the open field. But he also has made his share of mistakes during the UA’s 2-2 start.