If the last football game at Arizona Stadium felt like a funeral, the latest one felt like a party.

First-year Arizona coach Jedd Fisch pulled out all the stops for the Wildcats’ spring game Saturday. He got Tedy Bruschi and Rob Gronkowski to come back to Tucson to serve as honorary coaches. More than 200 UA football alumni ringed the north end zone. The first possession was decided by a jump ball between basketball coaches Adia Barnes and Tommy Lloyd. Fisch and Gronkowski chucked water balloons at students in the ZonaZoo — or, as Fisch dubbed it, the “Gronx Zoo.”

“It was completely different,” said veteran receiver Stanley Berryhill III, a Tucson native who’s been to plenty of UA spring games. “We had a tremendous turnout. It wasn’t just fans on one side; we had fans all over the stadium. ... It was incredibly fun.”

A scrimmage took place amid all the pomp and circumstance, but football played a secondary role in Fisch’s first spring game — for one day, anyway. There’s a method to his madness, which also included Gronkowski setting a world record by catching a football dropped more than 600 feet from a helicopter on Friday. The video was tweeted by ESPN’s Adam Schefter, who has more than 8 million followers. It had been liked almost 14,000 times as of Saturday afternoon.

“He’s done a great job of realizing the kids that he has to reach are 16, 17 and 18 years old,” said Bruschi, who joined the staff this year as Fisch’s senior advisor. “That’s the sign of a good coach, to recognize the sign of the times and how a program has to change.

“That’s one of Jedd’s greatest qualities. He’s able to see things and see forward and how it’s going to (influence) kids looking at a being a potential future Arizona Wildcat.”

The idea is simple: Create a buzz to attract high-caliber recruits. Once you start getting better players, wins should follow. Fisch inherited a team that has a lost a school-record 12 consecutive games, including a 70-7 shellacking by rival ASU on Dec. 11.

“We have everything here. I’ve said it numerous times. Great athletics, great fan support, stadium right in the heart of the campus and great academics. Why wouldn’t they come to Arizona? We felt it was a great opportunity to showcase that.”

Saturday’s scrimmage, the culmination of spring practice, represented a first step. As Fisch noted in his opening remarks afterward, “Now it’s time to get to work.”

It won’t be easy to turn the program around, and Fisch ultimately will be judged by the results on the field.

“All the alumni that come back, I said, ‘We’re behind you, win or lose.’ But once they get out here, it’s going to be them vs. USC and UCLA. It’s on them.”

Gronkowki’s team won the scrimmage 17-13, getting a late fourth-down stop to seal the victory. Shortly after, quarterback Gunner Cruz and tight end Stacey Marshall dumped a Gatorade bucket on the winning coach.

Those two hooked up for the game’s most exciting play, although they weren’t the only ones involved. Cruz handed the ball to Stevie Rocker Jr., who then flipped it to Boobie Curry. Just as he was being tackled, Curry lateraled the ball back to Cruz, who hit a wide-open Marshall for a 40-yard touchdown.

Marshall, a tight end, punctuated the score with a left-handed, Gronk-style spike. Gronkowski then grabbed the ball and spiked it a second time.

After the scrimmage, Gronkowski was given the Wildcats’ touchdown scepter. He snatched it and danced amid a throng of happy players.

“I haven’t been back in a while,” Gronkowski told Pac-12 Networks. “It’s important to come back. This is where it started. This is where I started getting recognized.

“It’s cool just to come back, inspire kids, talk to the team. Also, I want to see U of A balling. I want to be proud of them. It’s been a rough couple seasons.”

Arizona’s game plan for the scrimmage could best be described as vanilla with sprinkles. The Wildcats didn’t show much of Fisch’s actual playbook, and they mixed in all sorts of attempted trick plays, including two flea-flickers and a double-quarterback throwback pass (which didn’t work).

Those two are co-leaders for the starting quarterback job, but they’ll face additional competition in June when transfer Jordan McCloud officially arrives from South Florida.

Asked about his message for the QBs entering the offseason, Fisch said:

“Get ready for a war. If they want to be the starting quarterback here in September, then they better be ready to compete. We’ve got another guy coming in, we’ve got a bunch of guys here, and I hope they’re ready for a lot of battles to see who’s going to come out on top.”

Fisch said his top two goals for Saturday were to “stay healthy” and “have fun.” Arizona didn’t completely succeed regarding the former. Receiver Jamarye Joiner got banged up after catching a 61-yard pass from Cruz. Joiner left the game and had a boot on his left foot upon returning to the sideline.

Defensive end Jalen Harris did not participate for undisclosed reasons. Tailback Michael Wiley, who missed much of camp, scored the winning touchdown on a 3-yard run.

Tailback Bam Smith had 52 scrimmage yards and scored the lone touchdown for Bruschi’s team on a 5-yard swing pass from Plummer.

Bruschi on whether Gronkowski outcoached him: “I was not outcoached by Gronk. Does anybody think that? Heck no.”

After the scrimmage, the players high-fived students lined up in the first row of the ZonaZoo. The UA sold out its allotment of 5,000 tickets, and Berryhill expects a lot more come September. “It’s gonna be 57,000, sold out, in the fall,” he said. “That’s what the long-term benefits are gonna be. I truly believe that. ... You can feel the buzz around the program already, and I think it’s just gonna keep building as we go.”

Is Twitter going to determine a Rose Bowl champion? Not a chance. But there is evidence that social media, especially Twitter and accompanying video releases, rallies community support.

Seen and heard from the Arizona Wildcats' spring game on Saturday.

The Star columnist shares how Jedd Fisch and the Arizona Wildcats football program is in the "little by little" stage. Plus, a perspective of Adia Barnes' new contract, James Akinjo's role at Baylor, Aari McDonald's pro career and a historic season for the UA tennis team.

How former Arizona Wildcats fared in the NBA on Saturday

Arizona's Zac Gallen threw a one-hitter to win the opener 5-0 on Sunday.

Kevin Doyle didn't appear in any games during his three seasons as an Arizona Wildcat. 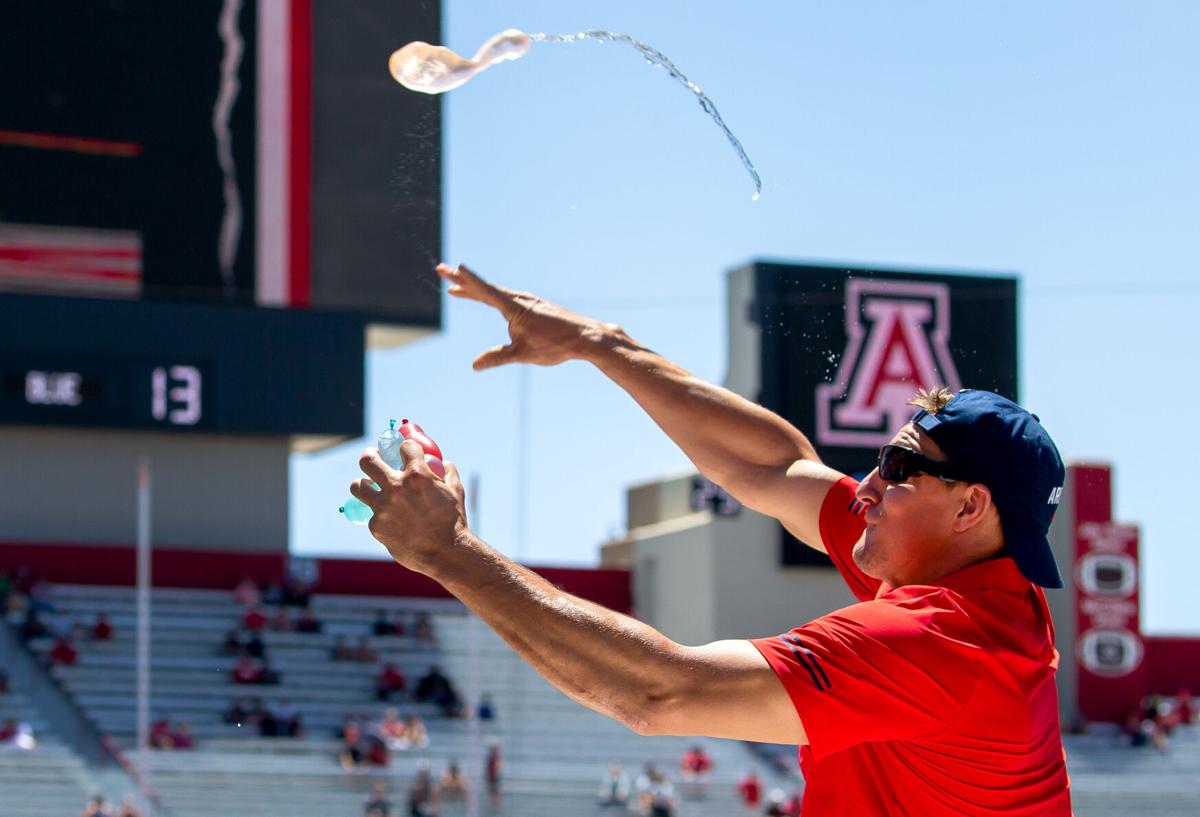 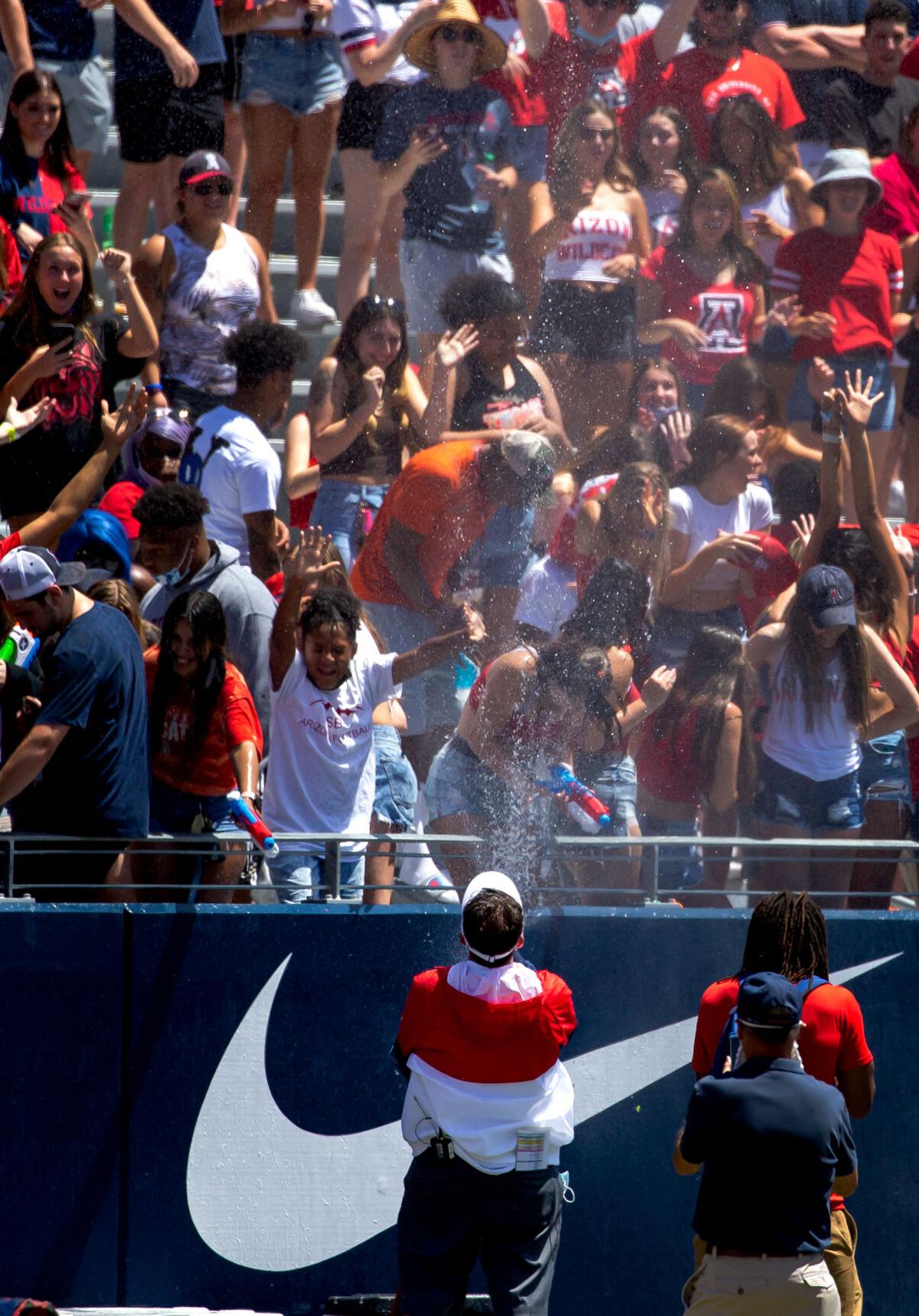 UA coach Jedd Fisch sprays the student section with water during Saturday’s spring game. The first-year head coach has “done a great job of realizing the kids that he has to reach are 16, 17 and 18 years old,” UA legend Tedy Bruschi said. 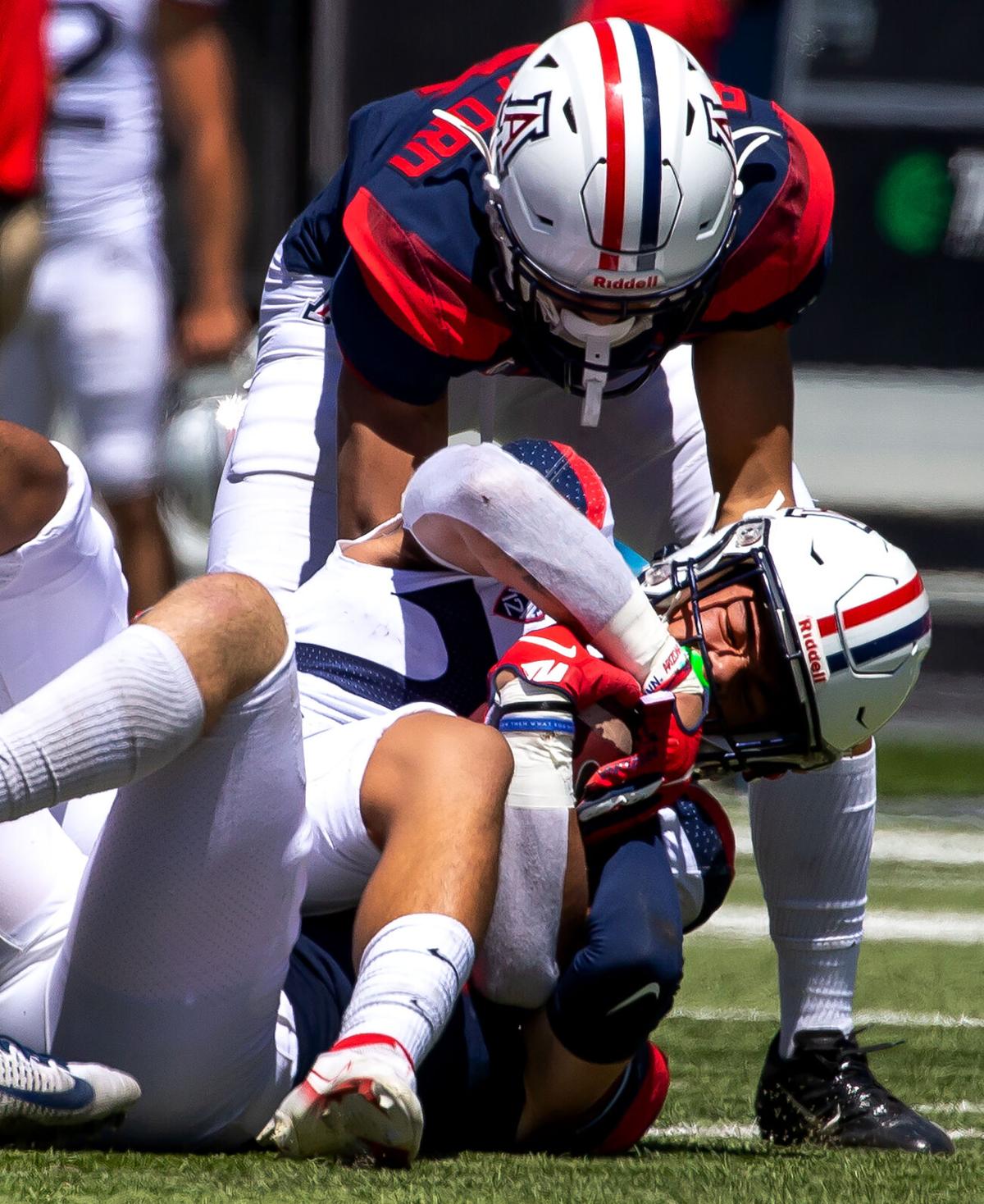