The Arizona Wildcats finished 1 yard short in Saturday’s “Week Zero” game against Hawaii, a game played under the college football microscope considering the day’s only other FBS game had finished. And for the second time in as many games, the Wildcats were left to wonder what happened.

Quarterback Khalil Tate completed 22 of 39 passes for a career-high 361 yards and three touchdowns, but was tackled at the 1-yard line on what could have been (after a PAT) a game-tying play, and the Wildcats fell 45-38 in Honolulu.

Arizona amassed 539 yards of total offense, but its defense allowed over 500 yards for the 12th time since defensive coordinator Marcel Yates took over in 2016. The Wildcats are 3-9 in those contests, which do not include last year’s rivalry loss to Arizona State. In that game, the Wildcats’ 2018 finale, the UA blew a 19-point lead and gave up 401 yards.

Arizona was plus-four in turnovers on Saturday and recorded six takeaways but was unable to beat its Mountain West Conference opponent. Wide receiver Cedric Byrd II erupted for 224 yards and four touchdowns for Hawaii, which converted on two of three fourth-down conversions. The Rainbow Warriors punted once the entire game.

Not the ideal start for the second season of the Kevin Sumlin era.

“As a team and as coaches, we’ve got to fix some things,” Sumlin said during his radio show Monday night on 1290-AM.

Sumlin said there were “too many critical errors in that game for us to be successful.”

“The performance overall was unacceptable,” he said on the radio show. “… Across the board, we were not good enough, didn’t play good enough and it’s just not acceptable for the results we had Saturday night.”

The Wildcats are off this week, then open their home schedule with a game against Northern Arizona.

It wasn’t all bad in the opener.

Senior cornerback Jace Whittaker made a triumphant return to the field, at least from an individual standpoint.

Whittaker, who missed all but one series in 2018 because of injuries, intercepted two passes against the Rainbow Warriors. He also earned the highest grade of any Wildcat on either side of the ball from Pro Football Focus.

“He makes a difference for us,” Sumlin said after the game. “He’s a coach on the field. He’s a leader.

“He’s a guy that we’re going to lean on heavily. You see his experience, particularly with some of those younger guys out there. He’s going to have to continue to be a leader for us as we go forward.”

Whittaker decided to return to Arizona for a fifth season in lieu of declaring for the draft or playing elsewhere as a graduate transfer. The loss superseded any positive feelings Whittaker might have had about his personal performance.

Wolfe and Roland-Wallace earned more snaps once starter Lorenzo Burns exited the game with a concussion.

Wiley made an impact as a receiver, finishing with three catches for 50 yards. Wolfe and Roland-Wallace each recorded a tackle while Morgan was a part of the UA’s field goal unit.

True freshmen can play in as many as four games without losing a year of eligibility, according to NCAA rules enacted last year. Sumlin and the Wildcats took advantage of it in 2018, playing a handful of players who are now a part of the Wildcats’ plans.

Sumlin said wide receiver Tre Adams is a classic example of a player capitalizing on the redshirt rule to save a year. The 6-foot-4-inch, 195-pound receiver from Frisco, Texas, played against Houston, Southern Utah, Oregon State and UCLA last year.

“He’s really a beneficiary of this rule because he played in four games last year, but was able to retain his redshirt year. In those four games, he played 60 snaps. To put that in perspective, there were 71 plays last Saturday night.”

One of the biggest questions heading into the season opener was this: Who will emerge as Arizona’s top pass catchers?

Tight end Bryce Wolma hauled in his first touchdown catch in nearly two years. Stanley Berryhill led the team in receiving with three catches for 92 yards and a touchdown in the fourth quarter, which tied the game at 35. Drew Dixon started his first game as a Wildcat and caught two passes for 13 yards.

Former quarterback Jamarye Joiner, who was praised by his coaches and teammates during preseason training camp, made a positive first impression as a wide receiver.

He caught four passes for 72 yards and a touchdown. Sumlin said he’s been pleased with Joiner’s progress in converting from a quarterback to a wide receiver and the first game was reassurance that Joiner made the correct decision.

“He is such a good athlete. I told him, ‘For you to stand by me for the game and we have guys out there who aren’t as athletic as you are, it’s a shame,’” Sumlin said on his radio show.

“He made some big catches for us in third-down situations and moved the sticks. He really just started in the summer. After spring ball, he knew where he was on the depth chart and wanted to play. He’s only going to get better,” Sumlin said on his radio show.

Cunningham is a 5-7 speedster who transferred from Sacramento City College in May after former wide receiver Devaughn Cooper was dismissed from the team. Sumlin said Cunningham was the last addition to the team and his decision was to either play football at the UA or run track at other Pac-12 schools. Cunningham had four catches for 65 yards, which included a 26-yard gain.

“He’s got a little burst and he’s got a bright future ahead of him,” Sumlin said.

Morgan, an offensive tackle from Marana High School who was in Arizona’s 2019 recruiting class, made his college debut as a blocker on the field goal unit. In the fourth quarter, Morgan was part of one of the wildest stretches in recent memory.

Arizona trailed by 10 points with less than four minutes remaining when Lucas Havrisik trotted onto the field to attempt a 38-yard field goal. Arizona was flagged for delay of game, moving the attempt back 5 yards. On the ensuing attempt, Morgan was flagged for false start — another 5 yards. Morgan did it again on the next snap.

“Guys were getting upset on the line of scrimmage because they knew what was going on and it wasn’t getting called,” Sumlin said on his radio show.

contributed to this story.

Greg Hansen: After unacceptable loss at Hawaii, where do Wildcats go from here?

Wildcats lost despite forcing six turnovers, the first time that has happened in 35 years.

The late coach of the Wildcats and Rainbow Warriors embraced the culture and people of the islands and made a lasting connection.

After the way last season began and ended, beating the Rainbow Warriors is a must.

The Star's longtime columnist checks in with storylines and things to watch heading into Saturday's season opener.

Emotional Rob Gronkowski says 'football was bringing me down'

There's no question Rob Gronkowski will go down as one of the top tight ends in football history, but the game "Gronk" loved for so many years…

Carrie Cecil: How we learn from losses, why Andrew Luck hung it up, and bearing down vs. tearing down

Carrie Cecil checks in following the Wildcats' "Week Zero" loss to discuss a variety of topics.

Cats Stats: Arizona needs to rediscover its identity by re-establishing the run

The Wildcats have been at their best when they commit to a ground attack – an approach they deviated from, to their detriment, in the opener vs. Hawaii.

Team was scheduled to play Hermosillo Naranjeros on Oct. 3.

The Star's Justin Spears breaks down each of Friday night's games.

Arizona Wildcats' hitting star will be inducted into UA's Hall of Fame on Thursday. 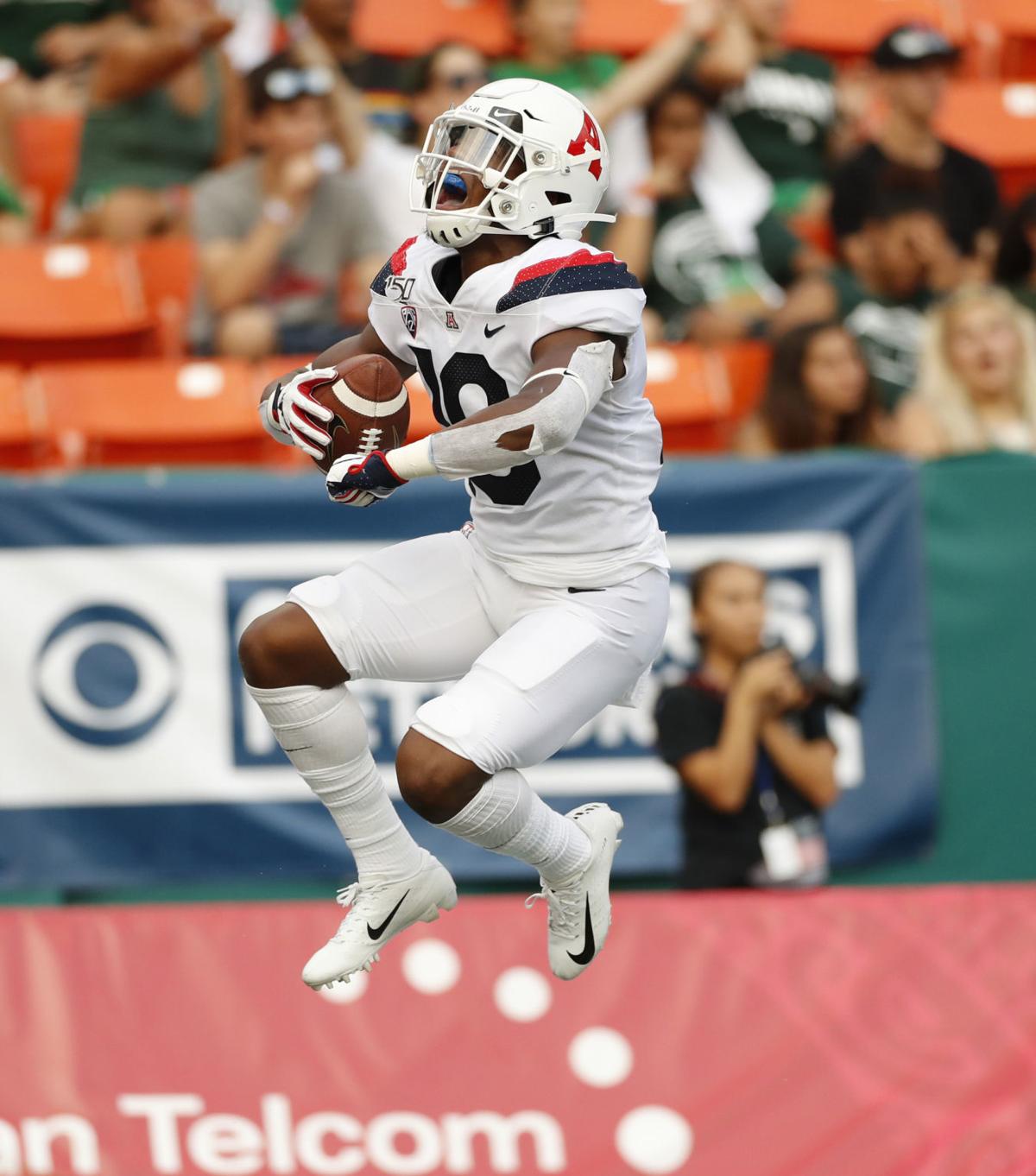 Jamarye Joiner, making a shift from quarterback to wide receiver, caught four passes for 72 yards and a touchdown in Saturday’s loss. 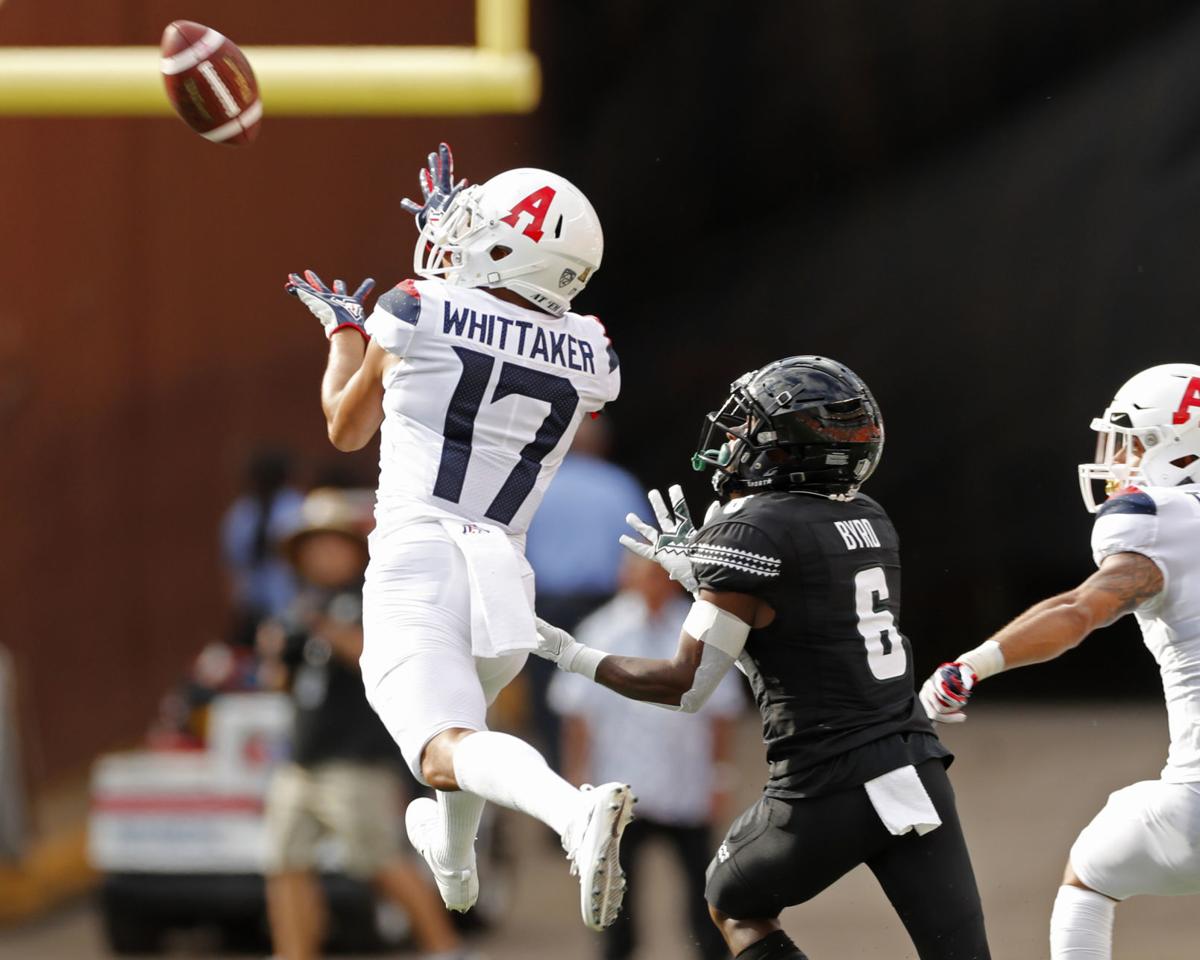 UA cornerback Jace Whittaker makes one of his two interceptions in the seasnon opener against Hawaii.