EUGENE, Ore. — With 1:36 remaining in the third quarter Saturday night, the Arizona Wildcats trailed Oregon by a mere five points.

This was no minor accomplishment.

Arizona entered the game on a 15-game losing streak, the longest in the nation. The Wildcats lost to NAU last week for the first time since the Great Depression, sending their fans into one.

Yet there they were, the Pac-12’s worst and best teams, separated by single digits deep into the night at Autzen Stadium.

The glimmer of hope was just that, though. Oregon, a 30-point favorite, pulled away in the fourth quarter to secure a 41-19 victory.

Despite the loss, the Wildcats had reason to feel better about themselves when they boarded the flight home.

The UA defense stiffened after a rocky start, producing a safety that allowed the Wildcats to creep within striking distance.

None of it mattered in the end; Arizona still finished on the wrong side of the scoreboard for the 16th straight time. But for a program desperately searching for something positive, the Wildcats’ performance through three-plus quarters at least provided a hint of what they’re capable of.

"Our guys came out today, and there was a lot of good football that was played," UA coach Jedd Fisch said. "I’m really excited and proud of the step forward that we took in a lot of areas.

"But one of the things we talk about all the time is before you learn how to win ... you have to keep from losing. When you turn the ball over five times and commit nine penalties, that’s what’s gonna happen."

Trailing 24-10 at halftime, the Wildcats got the ball to start the third quarter and did what they did for most of the first half — methodically advance it downfield.

They also made a familiar mistake. McCloud threw his second red-zone interception of the game.

The only good news was that the interceptor, Verone McKinley III, stepped out at the 2-yard line. Three plays later, Mo Diallo sacked Anthony Brown in the end zone for a safety. It was Diallo’s first snap of the night after he sat out the first half because of a targeting foul last week. It was the Wildcats’ second sack of the season – the first time they’ve had two since 2018.

"I just ran into that huddle and said, 'A safety would be beautiful right now, boys,' " Fisch said. "Not only did they give it to us, but we also responded with a touchdown in the same way that happened in the BYU game. That was really good."

Aided by a pair of penalties, Arizona cut Oregon’s lead to 24-19 on Drake Anderson’s 1-yard dive.

The Wildcats ran 27 plays to the Ducks’ eight in the third period, possessing the ball for over 12 minutes.

Oregon answered with a field goal, bumping its lead to eight points with 13:37 to play.

After an Arizona three-and-out — its first of the night — Oregon expanded its lead on an 18-yard pass from Brown to tight end Spencer Webb, who burned Christian Young on an out-and-up.

Then came McCloud’s fourth pick, a forced throw into a crowd. Oregon’s Bennett Williams returned it 68 yards for a touchdown, making it 41-19 with 7:04 remaining.

Despite McCloud throwing five interceptions, Fisch said the transfer from South Florida would remain the starter for the foreseeable future.

"He’ll play as long as he stays healthy," Fisch said. "The more we were with him, the more he understood the system. The biggest concern I had going into the season was he only got here in training camp. We didn’t have him in the spring like we had the other two.

"He just had the poise to keep on battling. He was never afraid to throw the football. I’m sure he’s very upset right now, and I hate that for him. But those things happen. We’re gonna grow from it and get better."

Arizona started shakily, to say the least. On the third play from scrimmage, Brown connected with Jaylon Redd over the middle. Redd spun out of a tackle attempt by safety Gunner Maldonado and raced 63 yards for a touchdown.

On Arizona’s first offensive play, McCloud threw an interception. The Wildcats set up a screen pass to the left side, but McCloud overshot Drake Anderson. Williams made a diving grab to give Oregon the ball at the UA 25.

Arizona kept Oregon out of the end zone. Treshaun Hayward fought off a block to tackle Brown on an option play at the 3. Camden Lewis’ 21-yard field goal made it 10-0.

The Wildcats then put together one of their most cohesive drives of the season. Relying mostly on the ground game, Arizona went 91 yards in 10 plays. The Wildcats capped the drive with an 11-yard pass from McCloud to tight end Bryce Wolma. It was Wolma’s first touchdown since Aug. 24, 2019, vs. Hawaii.

The Wildcats again advanced the ball, reaching the Oregon 12. But on second-and-11, McCloud threw another pick. He rolled to his left and tried to loft a pass to Stanley Berryhill III in the back of the end zone. Oregon’s Mykael Wright undercut Berryhill, leaped and snagged the pass, keeping one foot inbounds despite Berryhill’s desperate attempt to fling him out.

Oregon turned the pick into points, driving 80 yards in eight plays. Brown connected with tight end Terrance Ferguson for a 9-yard TD to make it 24-7. Ferguson gained just enough separation from Maldonado to cradle the pass in the end zone.

"No moral victories," said Anderson, who rushed for a team-high 67 yards. "But we know that we can play. ... We had a chance to win the game with 10 minutes left in the fourth quarter. If anything, that makes the team that much more hungry.

"We’re already talking about next week. We’re gonna focus on the details. We can’t wait to be back to Arizona so we can be back to work."

UA tight end Alex Lines appeared to injure his shoulder after making a 19-yard reception in the third quarter. He was taken to the locker room and did not return.

Jaydin Young started at safety in place of Jaxen Turner, who had to sit out the first half because of a targeting suspension. Turner started the second half.

Defensive tackle Trevon Mason returned to the starting lineup sitting out last week because of an undisclosed injury.

Receiver Jamarye Joiner made his 2021 debut. He missed most of the offseason while recovering from foot surgery. Joiner was involved in a trick play in the fourth quarter, tossing a lateral to Michael Wiley on a kickoff return. But the throw was ruled a forward pass, negating a significant gain.

Oregon defensive end Kayvon Thibodeaux, the potential No. 1 pick in the 2022 NFL draft, returned after missing the past two-plus games because of an ankle injury. Thibodeaux got banged up in the first half and did not play in the second.

The Star's longtime columnist checks in on where Treyson Bourguet fits among the best quarterback recruits in Tucson history, why Southern Arizona is well-represented at the Ryder Cup and how Byron Evans found himself back in town Friday night.

What to watch for when the Arizona Wildcats visit No. 3 Oregon in Pac-12 opener

QB Jordan McCloud set to make first start for Arizona as Wildcats take on No. 3 Oregon

The Cats are 0-3 — and couldn’t even beat NAU — but that doesn’t change Fisch’s long-term plan or vision for what UA football can become.

Vast majority of NIL deals modest so far, while international athletes continue to be shut out

Arizona says its athletes report an average of over $450 per NIL deal.

Charlie Dennis' early goal helps the Men in Black climb to third place in the USL League One standings with a 1-0 win.

By the numbers: How Arizona kept it close, then stumbled late against Oregon

Key statistics and figures that show how Arizona battled with No. 3 Oregon before getting outscored by 17 points in the fourth quarter.

Hear what the Arizona Wildcats said following Saturday's loss to Oregon in Eugene.

Notes, quotes and stats from the Arizona Wildcats’ 41-19 loss to No. 3 Oregon

Pertinent factoids, words and numbers from the Cats' setback in Eugene.

The Cats' setback against the Ducks revisited: Assessing Jordan McCloud, rediscovering the run game and more.

The Cats and Bruins will square off at 7:30 p.m. at Arizona Stadium; the game will air on ESPN. 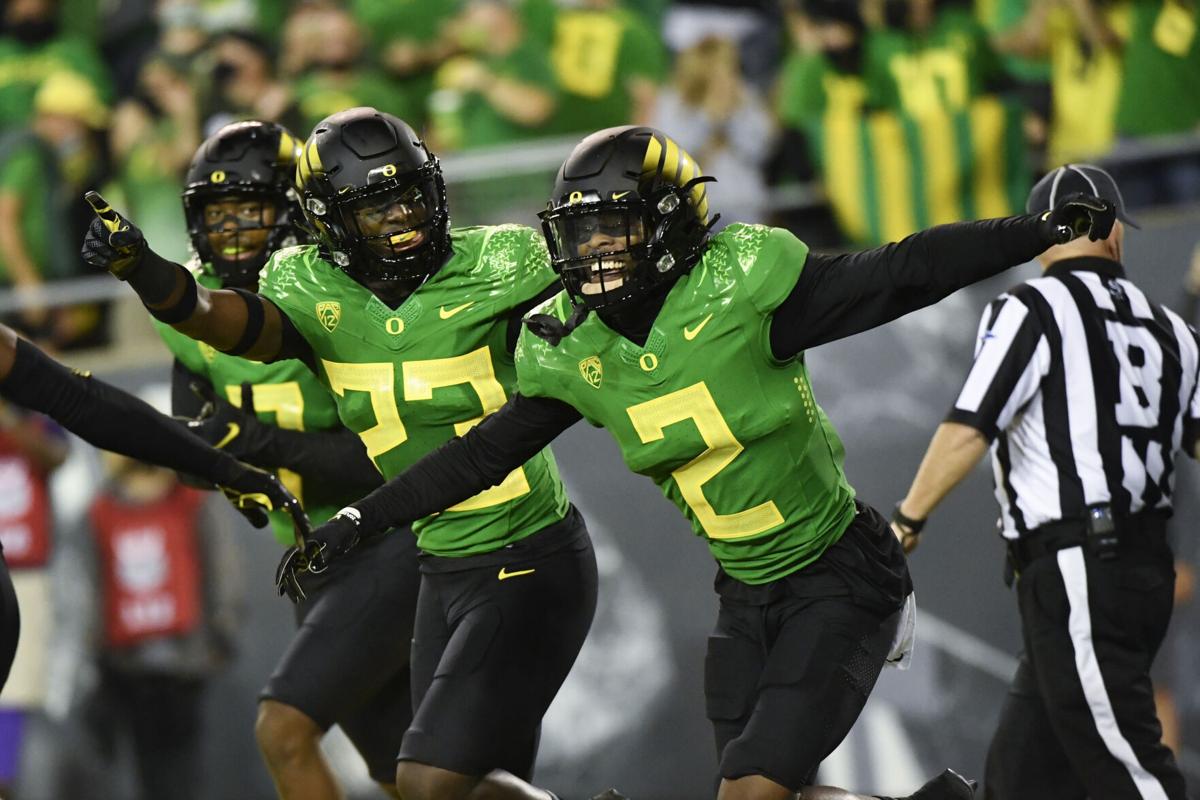 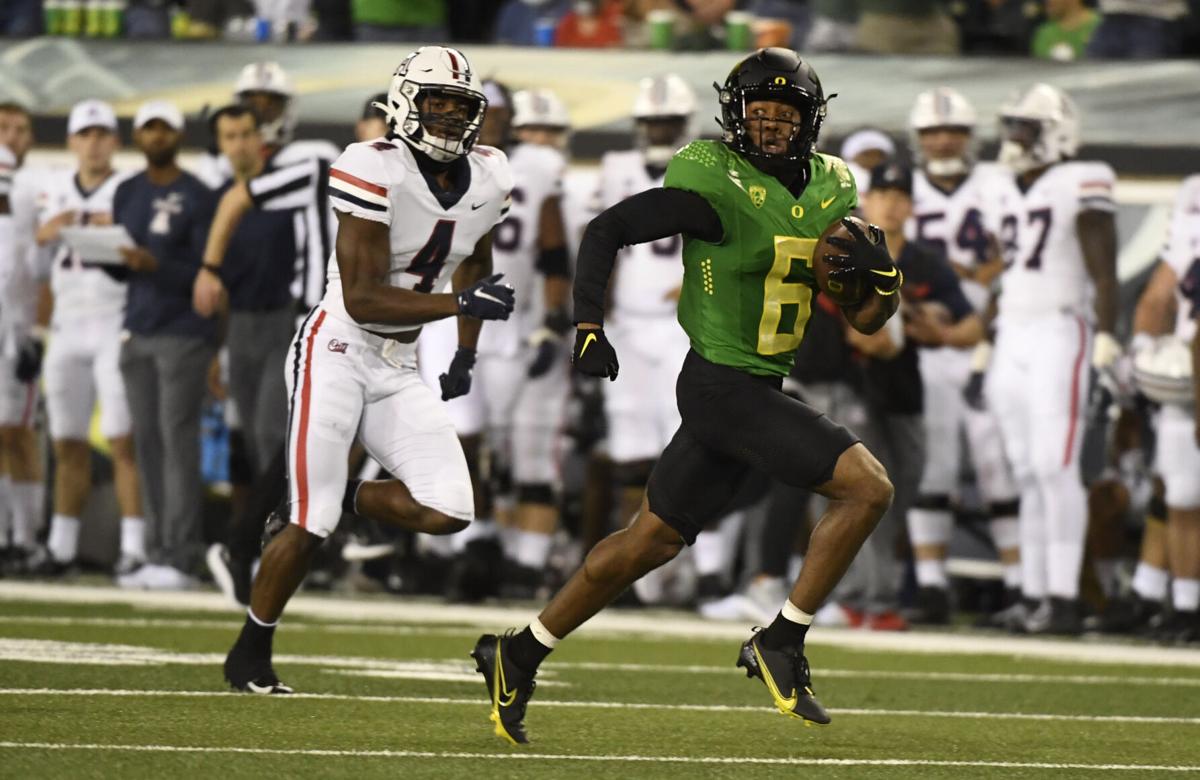 Oregon wide receiver Jaylon Redd looks back as he is pursued by Arizona cornerback Christian Roland-Wallace while heading to the end zone on a 75-yard run. 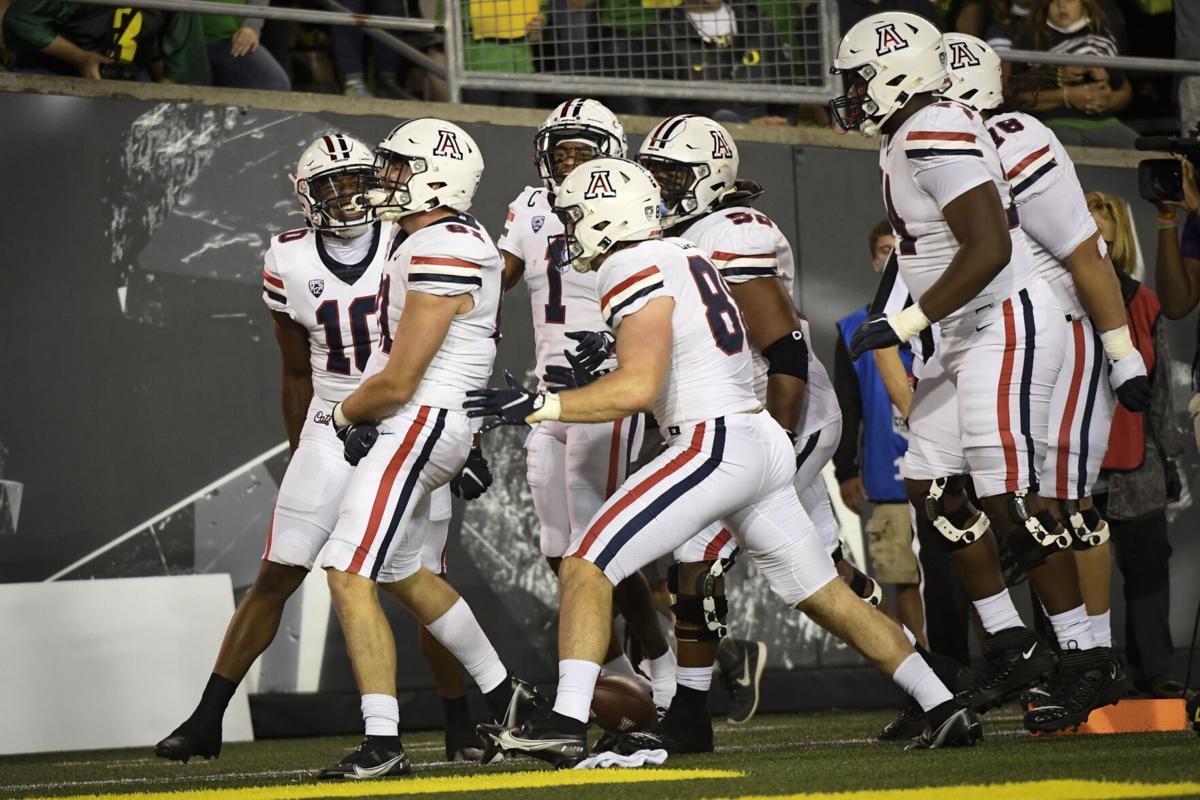 Arizona tight end Bryce Wolma celebrates his touchdown with his teammates during the first quarter.