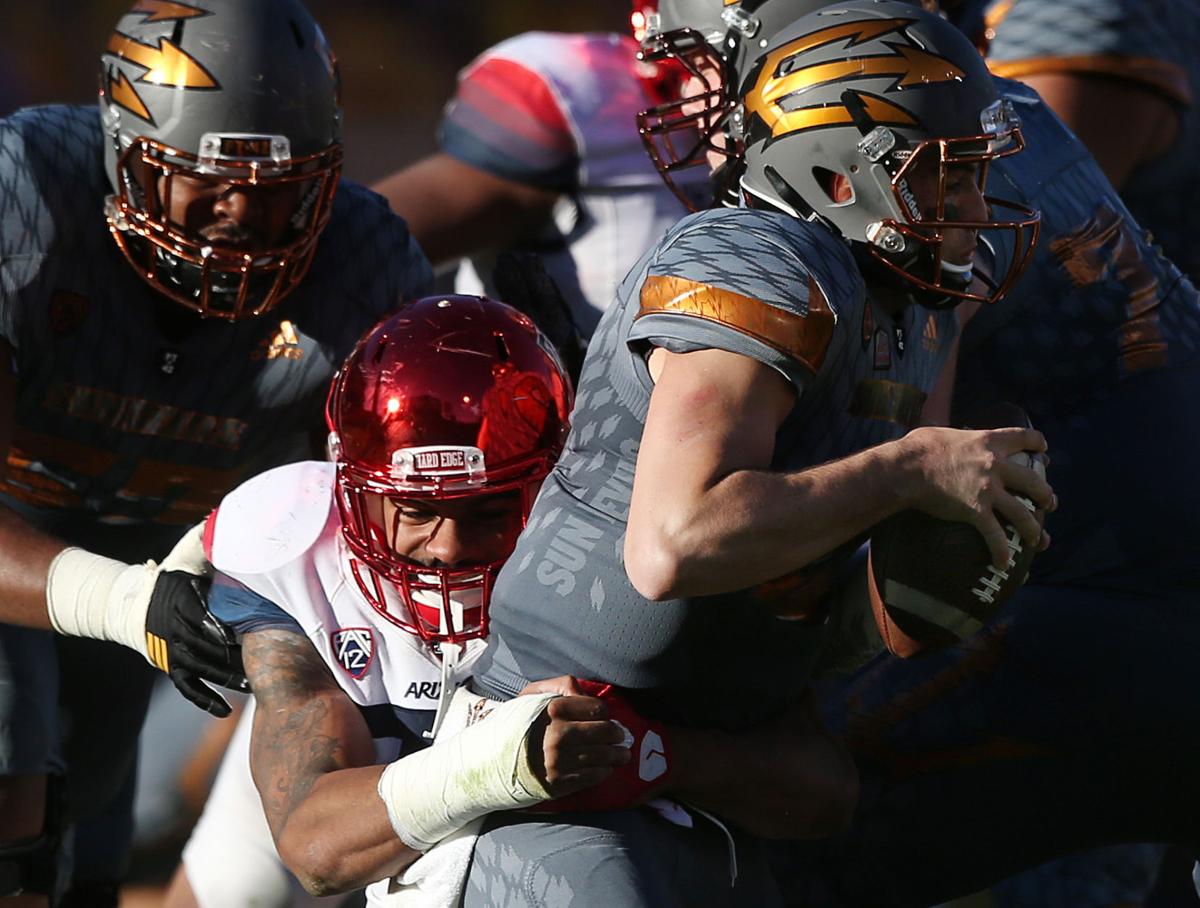 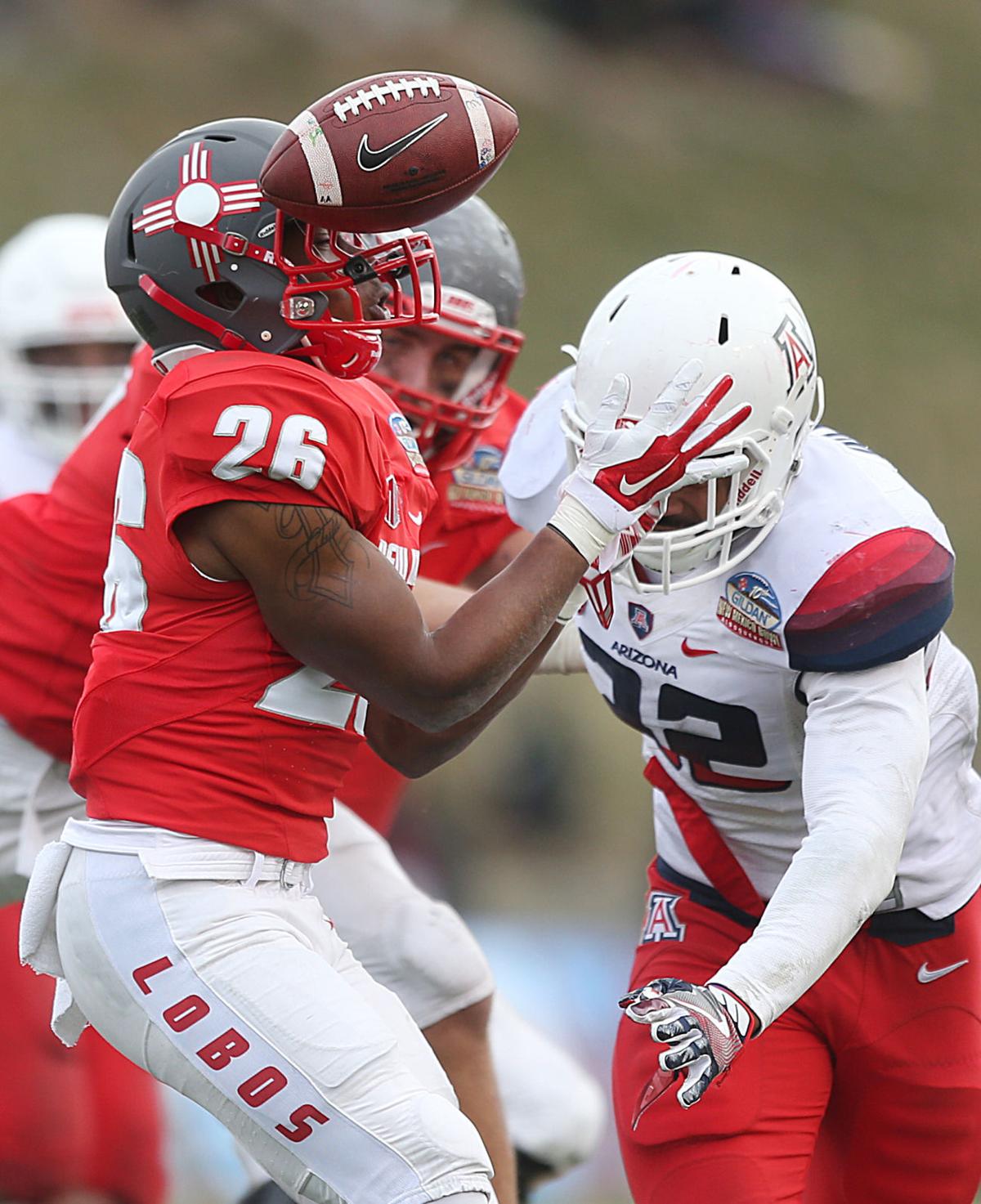 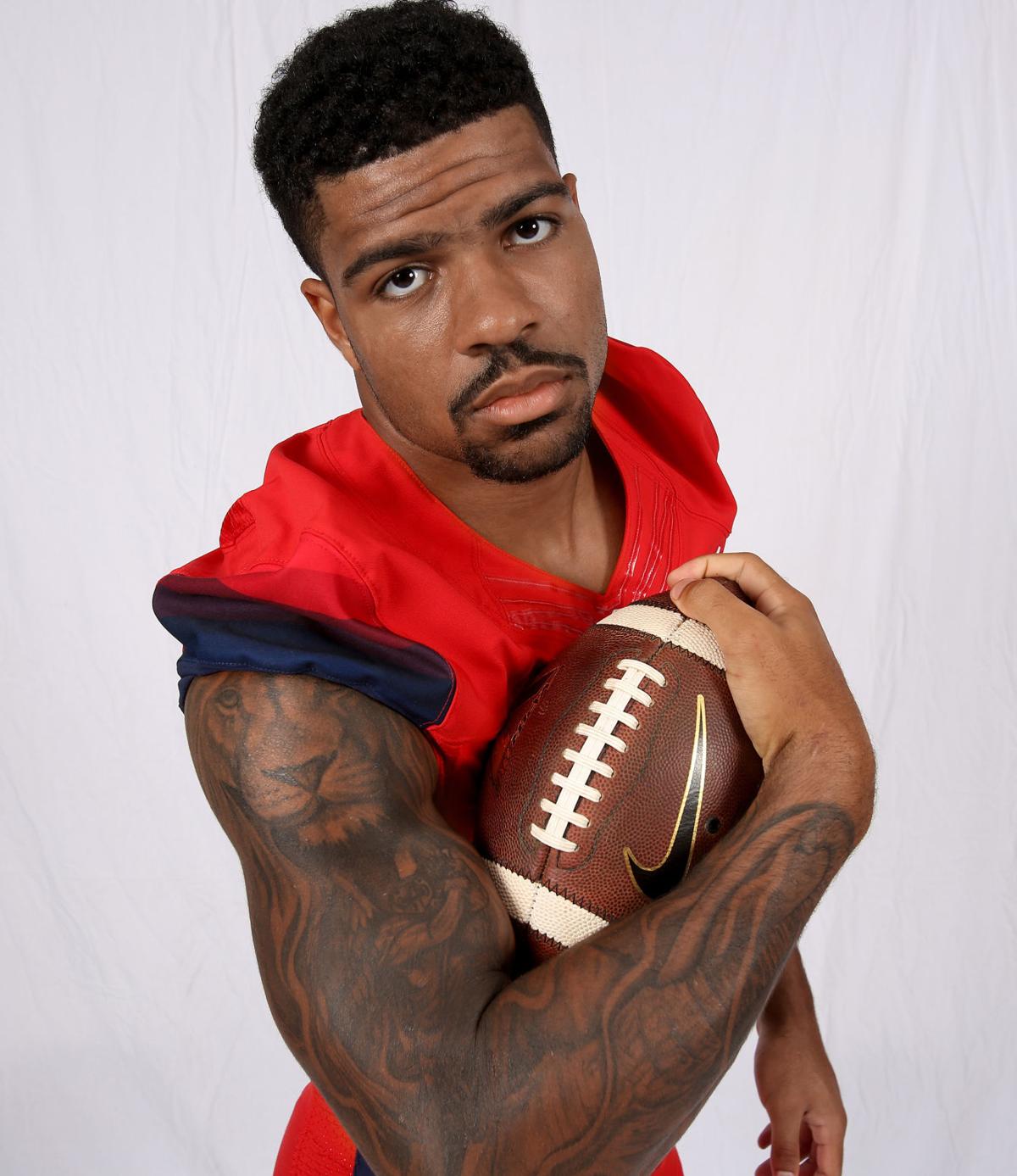 We don’t know all the particulars of Arizona’s new defense; coaches and players have been tight-lipped about specifics since Marcel Yates became the coordinator in January.

We do know that it will feature a position called the “Stud,” a defensive end-outside linebacker hybrid whose primary responsibilities are rushing the passer and dropping into coverage — but mainly rushing the passer.

The expected starter at Stud is redshirt junior DeAndre’ Miller, who showed flashes last season, had a strong spring and continued to perform well in training camp. It will take several players to generate the pass rush Yates and UA coach Rich Rodriguez are seeking. But for the rebuilt Wildcats defense to be all it can be, Miller has to lead that charge.

He’s working toward becoming that player — a studly Stud — daily.

“He could be great,” teammate and fellow linebacker Cody Ippolito said Wednesday. “Long arms, long body, tall. Great hand skills. He works on his craft every day. His potential is through the roof.”

Miller has all the physical traits to become a productive pass rusher: size (6-3, 240), quickness and athleticism. He offered glimpses of what he could become in 2015, when he had eight tackles-for-losses, including two sacks, among 50 total stops in 11 games.

But Miller knows he needs to deliver more, so he started studying some of the best pass rushers in the sport, including Von Miller, Khalil Mack, DeMarcus Ware and Dwight Freeney. DeAndre’ Miller will watch film of them at the Lowell-Stevens Football Facility and YouTube clips in bed before going to sleep. If he can incorporate any of their games into his, he’ll become a better player.

“I need a variety of different moves,” Miller said. “You can’t do the same move every time.”

Miller has spent considerable time trying to improve his hand usage, which is critical to winning battles against bigger offensive tackles. That’s one of three points of emphasis from defensive graduate assistant Hank Hobson, a former Arizona linebacker who’s working with the Studs. Hobson also implores Miller to stay low and explode through his hips.

Miller took a less direct route to Tucson than he does to get to the quarterback. He was born and raised in Anchorage, Alaska, where his father’s parents lived. His dad met his mom in her native Germany. They moved to the Phoenix area when Miller was 14. He became an all-state performer at Buckeye Union High School — after adjusting to a new and different climate. The average high in Anchorage in August is 65 degrees.

“I thought that was hot,” Miller said, “till I moved out here.”

Miller made a minimal impact his first two seasons at Arizona. He played in 13 games as a freshman, registering three tackles as a backup linebacker and special-teamer. He had eight tackles, including one for a loss, in three games in 2014 before suffering a season-ending shoulder injury.

Miller’s sophomore year wasn’t a complete loss, however. He roomed with Scooby Wright, who had one of the best defensive seasons in NCAA history. Miller got a behind-the-scenes look at what it took to become an All-American.

“He had a motor,” Miller said. “He would go until he passed out. He would run our conditioning (drills) until he threw up. He’d keep running as he was throwing up. That’s one thing I learned from him — his motivation and his work ethic. It rubbed off on me.”

Aside from ’14, when Wright basically couldn’t be blocked, Arizona hasn’t had a consistently productive pass rush under Rodriguez. The Wildcats averaged 2.71 sacks per game that year, tying for 26th in the nation. Wright accounted for 14 of the team’s 38 sacks.

In each of the other three seasons under Rodriguez, the Wildcats ranked 67th or lower in sacks per game. Last season was actually their second best at 2.08 per contest. Defensive end Reggie Gilbert had a team-high 3ƒ. Four players tied for second with three apiece, including two safeties.

With Wright and Gilbert gone, Arizona’s logical sack successor is Miller, whom Rodriguez tabbed the best pass rusher among the linebacking crew. Yates likes what he has seen so far.

“He’s a student of the game,” Yates said. “He’s getting better every day. He works hard. He’s physical. He wants to be good. He asks a ton of questions.”

Yates knows what makes a successful Stud. Kamalei Correa played that position under Yates at Boise State the past two seasons, compiling 19 sacks and five forced fumbles. The Baltimore Ravens selected Correa in the second round of the 2016 NFL draft.

The freshman looks like a keeper at corner, where he might just be scratching the surface of his potential.

The freshman from El Paso considers Tucson the perfect landing spot - it's away from home, but close enough for family to come see him play.

Arizona football: These 14 returners expected to lead Wildcats in 2016