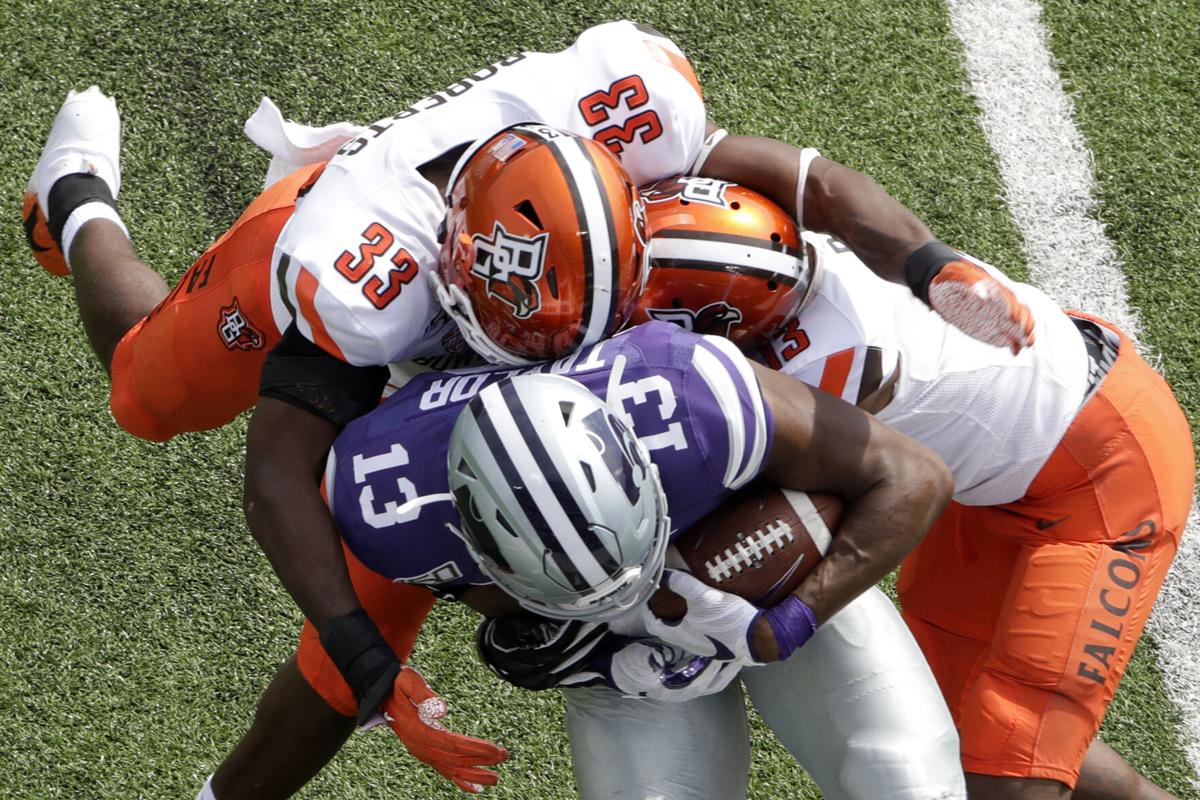 Bowling Green transfer Jerry Roberts (33) is among the players who should contribute right away in 2021, Wildcats coach Jedd Fisch says.

Editor’s note: The Star is examining the state of Arizona football recruiting. Part 1: The impact of the NCAA transfer portal.

No team in the Pac-12 Conference added more players for 2021 via the NCAA transfer portal than Arizona.

But you shouldn’t necessarily expect that to become a trend as Jedd Fisch and his staff reshape the Wildcats program.

“It was a rare year in that regard,” Fisch told the Star in a recent interview.

It sure was. Fisch became Arizona’s coach two days before Christmas. The early signing period ended six days earlier. Fisch didn’t finalize his staff until about mid-January. Oh, and all of that took place in the midst of a pandemic that had prevented any in-person contact with recruits since the previous March.

By the time Fisch arrived, the UA had signed 16 players for the class of ’21. He and his staff knew they couldn’t fill out the class with high school players before National Signing Day on Feb. 2. They also assessed the roster and quickly realized they needed to improve the team’s talent and depth at specific positions.

So Arizona attacked the transfer portal. The Wildcats added 10 players from other four-year schools who are known to be on scholarship — 11 if you include receiver Ma’jon Wright, who left the UA after last season but elected to return.

The Wildcats added three transfers from four-year schools the previous cycle. In the two before that, they had none.

The average among other Pac-12 schools for 2021 is 4.5, per 247Sports.com’s database. No other program has more than seven. Of course, no other program hired a new head coach this offseason.

“It would more often than not be heavy like that in a transition year, when you’ve just got a lot of comings and goings,” said Matt Doherty, Arizona’s director of player personnel. “I hope there’s not another year where we need to go and patch so many holes.”

Fisch said he expects future portal acquisitions to be more in line with the league average — even after the NCAA approved a one-time transfer allowance that enables student-athletes to switch schools without having to sit out a year. He said any future group in which high school players account for only 60-65% of the class would be “very strange.”

“Usually what you’ll do is, you’ll build your program through and build your relationships up with these high school kids from their sophomore year, their junior year,” Fisch said. “And then they commit to you.”

The new UA staff couldn’t do that this time. So it had to pivot.

The transfer portal, which came into being in October 2018, is overflowing with players — for better or worse. Better: It provides a convenient avenue for student-athletes to pursue other opportunities. Worse: There are also more players in the portal than openings on rosters.

Arizona had needs and available spots — in part because of departures via the portal. For example, the Wildcats lost veteran quarterbacks Grant Gunnell to Memphis and Rhett Rodriguez to Louisiana-Monroe. Additionally, their lone high school quarterback pledge for 2021 decommitted.

Through the portal, the UA was able to add Gunner Cruz from Washington State and Jordan McCloud from South Florida. Cruz enrolled in time to for spring practice. McCloud will be arriving on campus any day now.

Linebacker is another position Arizona was able to replenish in short order. The previous staff tried to account for the losses of Tony Fields II and Colin Schooler by packing the ’21 class with linebackers (although no one anticipated the pandemic prompting Fields and Schooler to leave last offseason).

Cruz, McCloud and Reed all have multiple years of eligibility remaining. The only players among the 10 portal pickups who don’t are Hebert and Roberts.

In general, multiyear eligibility is one of the key criteria Fisch and his staff seek when they peruse the portal. He explained their overall plan of attack as follows:

“For us, it has to be position-specific. It has to be geographically wise for us to pursue. And then there has to be a certain number of years left of eligibility.

The biggest difference between players acquired via the transfer portal and high school prospects is that the former are known quantities, or something close to it. Every prep player is a projection.

“You can throw on Jerry Roberts and watch him make plays against Kansas State, where he’s going against grown men and he’s playing Power Five talent and he’s producing. It’s as simple as that,” Doherty said. “That reduces uncertainty in terms of what you’re getting and gives you some conviction about what he’s going to be able to do for you.”

Although they consider this year an anomaly, Fisch and his staff acknowledge that the portal will continue to constitute a portion of their team-building plan.

“I don’t want to guarantee anything ever,” Doherty said, “but I would say there probably won’t be a class during Jedd Fisch’s time here where at least one transfer isn’t part of (it). That’s just the way it works now.”

Gray helps Doherty assemble and maintain the equivalent of a “pro personnel board” like an NFL team would have.

“We’re able to grade players in the portal,” Doherty said. “We have those grades applied to our own roster as well, so we can look at the board ... and see who appreciably improves the roster or a given position group.”

Filling needs and adding talent are the primary goals. Another is offsetting imbalances of upper-and underclassmen that might arise at certain positions. The staff tracks that via what Doherty refers to as the team’s “attrition chart.” Newcomer Alex Lines, for instance, gives Arizona another tight end with multiple years of eligibility.

The overarching objective when it comes to the portal is to bring in players who can make an instant impact. Arizona isn’t on the same level as schools such as Alabama or Ohio State, whose recruiting classes annually are filled with five-star high school prospects. But the UA, in its current state, can offer something those schools can’t — abundant opportunities for significant playing time.

“You’ve got players who are trying to make one last stand toward their NFL dreams,” said Blair Angulo, a recruiting analyst who covers the west region for 247Sports.com. “A school like Arizona that doesn’t have that star power, they’ll provide an opportunity, snaps, reps.

The reveal covered all Pac-12 home games for the first four weeks, from Aug. 28 through Sept. 18, as well as the Friday games throughout the fall.

Scores and schedules for the eight Super Regional softball matchups

Arizona threatens late but can't stop long skid in falling to 18-34 on the season.

How can UA football change its national perception? Winning in-state recruiting battles is a start

'Football teaches you so much': Players, coaches excited for Friday's All-Star Showcase

Seniors who had their seasons cut short in the fall will play one final high school football game in the Southern Arizona All-Star Showcase at Tucson High on Friday.

“It felt good, because none of the coaches have seen recruits for 16 months. Just seeing everyone, it was what it used to be when I was a freshman,” said Scottsdale Saguaro edge rusher Tristan Monday, who is committed to the UA's 2022 recruiting class.

Hodge, who's from Phoenix, recorded 90 tackles for the Aggies in 2019; he joins the Wildcats as a walk-on.

Fifiita has an uphill battle to convince his Anaheim Service High School teammates to follow him to the UA, but he’s hopeful.

Bowling Green transfer Jerry Roberts (33) is among the players who should contribute right away in 2021, Wildcats coach Jedd Fisch says.