LOS ANGELES — With Khalil Tate watching from the sideline, Will Plummer darted through the USC defense for a 16-yard touchdown. Arizona pulled within 10 points of the Trojans. Could the Wildcats come all the way back, as they did in 2017 with Tate at the helm at the L.A. Memorial Coliseum?

They came awfully close. Arizona got within a score of USC. But as has happened so often during a losing streak that now sits at 20 games, the Wildcats couldn’t stick the landing.

Arizona’s next chance to end the skid comes next Saturday against Cal. It won’t be easy; the Golden Bears upset Oregon State earlier in the day.

"Credit to our team. They battled their tails off," UA coach Jedd Fisch said. "It was 35-14 at halftime, and it came down to the very last play of the game.

Plummer played well, authoring his best game as a Wildcat (20 of 34, 264 yards). Jamarye Joiner again had an impact as a quarterback before hurting his knee. None of it was enough to offset an Arizona defense that, for at least a half, reverted to its past form.

The Wildcats entered Saturday ranked fourth in the Pac-12 in total defense, yielding 362.4 yards per game. USC had 360 at halftime and finished with 547, the most by a UA opponent this season

The UA defense stiffened in the second half — when the Trojans played without star receiver Drake London — limiting USC to six points. But a 21-point halftime deficit proved too steep to overcome.

"We're putting a new offense in, a new defense, a new special teams and a new culture. It's a lot," Fisch said. "I’m proud of the way these guys battled, and I hope this second half is the start of something really special."

Four years ago, Tate led Arizona back from a 35-6 deficit. The Wildcats tied the score at 35 with 8:23 to play. They ultimately lost 49-35, ending a four-game winning streak.

Arizona trailed this one 35-14 at halftime. But the Wildcats got the ball to start the second half, and they advanced into scoring range.

Arizona appeared to move into the red zone on the latest of several trick plays drawn up by Fisch and his staff. With Joiner in the shotgun, Plummer went in motion and took a handoff. He then threw a backward pass to Joiner, who connected with Stanley Berryhill III for a 10-yard gain to the USC 16. But Arizona was flagged for an illegal formation, negating the play.

The Wildcats kept battling. Linebacker Anthony Pandy intercepted Slovis on the next possession and returned the ball 37 yards for a touchdown. It was Arizona’s first pick-six since it had two against Cal on Oct. 6, 2018.

"It felt really good being in my hometown, at the Coliseum," said Pandy, who finished with nine tackles. "A lot of my family is here. So it was good that I made a play and they all saw it."

Pandy’s play also enabled the Wildcats to end at least one streak. They had failed to score 20 points in 10 consecutive games. The pick-six and Tyler Loop’s PAT put them at 21.

Arizona wasn’t done. Plummer capped a nine-play, 60-yard drive with the aforementioned 16-yard TD scamper. That made it 38-28 with 12:50 left in the fourth quarter.

After a second straight defensive stop, Arizona advanced to the USC 8. Three incomplete passes forced a field-goal attempt. Tyler Loop’s 25-yarder made it a seven-point game with 6:04 left.

The Trojans responded with a five-play, 52-yard drive that culminated in a field goal. The key play: Keaontay Ingram’s 45-yard rush. He finished with 204 yards.

Arizona drove for another field goal by Loop, a 40-yarder with 1:26 left. The Wildcats couldn’t recover the onside kick.

"We made a huge point of emphasis (of) what the fourth quarter should look like, how you compete all the way through the fourth quarter," said Fisch, whose team had been outscored 48-0 in the fourth period in Pac-12 play. "I think we all saw that there was absolutely no flinch, no letdown, no anything."

London and his teammates had their way with a depleted Arizona secondary in the first half. London caught nine passes for 81 yards and two touchdowns before exiting late in the second quarter. His right leg got caught underneath cornerback Christian Roland-Wallace after a 6-yard TD catch. London, a projected top-10 draft pick, had to be carted off.

Fisch and his staff threw several wrinkles at the Trojans — including playing Joiner as a traditional quarterback. With Arizona trailing 7-0 in the first quarter, Joiner threw a 73-yard touchdown pass to Tayvian Cunningham. It was the Wildcats’ longest play since Cunningham’s 75-yard TD vs. USC in last year’s opener.

After Slovis threw a 62-yard touchdown pass to Gary Bryant to make it 14-7, Arizona pulled another trick out of its bag. In punt formation to start the second quarter, Pandy took a direct snap and ran 32 yards for a first down.

Arizona advanced to the USC 24-yard line, but a holding penalty and a sack halted the drive.

Kyle Ostendorp pinned the Trojans at their 4-yard line, but they marched 96 yards for a touchdown to make it 21-7 midway through the second quarter. London finished the drive with a 2-yard TD catch from Dart.

London’s second TD made it 28-7. Arizona answered with a touchdown, which was preceded by a near-touchdown. Plummer threw a long pass to Cunningham, who seemed to be on his way to a 72-yard TD. But Isaac Taylor-Stuart ripped off Cunningham’s helmet at the USC 37. By rule, the play had to be stopped there.

With Slovis back in at quarterback, the Trojans went 75 yards in just over two minutes. Slovis’ 15-yard TD pass to Bryant made it 35-14.

The Wildcats lost starting free safety Jaxen Turner to a targeting disqualification in the first quarter. Gunner Maldonado, who missed last week’s game because of a shoulder injury, initially replaced him but wasn’t healthy enough to continue. That left Arizona with backups Jaydin Young and Rhedi Short at the safety spots, and USC took full advantage.

That Arizona was able to counterpunch was an encouraging sign. The Wildcats' 466 yards were a season high.

"I thought we had the best week of practice we’ve had all season this past week," Plummer said. "Our offense looked really good. We made a lot of big plays in practice. It seemed like everybody just started to understand the offense. It was amazing to see.

"It seemed like something just clicked. I don't know what it was. But everybody was locked in. Everybody was ready to just come back to work, and it's showing."

• Tight end Bryce Wolma did not play after getting banged up during practice this week. It was only the second game Wolma has missed in his UA career. The fifth-year senior had appeared in 48 of 49 games before Saturday.

• Defensive end Mo Diallo got hurt in the first quarter. He limped off the field but later returned.

• Diallo’s replacement, Paris Shand, recorded a sack later in the period. It was Shand’s first sack of the season and the second of his career.

• Freshman receiver Dorian Singer logged his first career reception in the second quarter on a 19-yard pass from Plummer. singer finished with three catches for 65 yards.

• Josh Baker made his third straight start at right guard in place of Josh Donovan (lower leg). Donovan did dress after not suiting up the previous two weeks.

The Star's Justin Spears, Michael Lev and Alec White preview the Arizona-USC game on Saturday along with other games in the Pac-12.

Seen and heard from Los Angeles, where the Arizona Wildcats are taking on USC at the Coliseum.

By the numbers: How USC handed Arizona its 20th straight defeat

Arizona clawed its way back in the second half, but the Wildcats fell to USC 41-34 at the L.A. Coliseum, extending the UA’s losing streak to 20 games.

The Men in Black beat the Richmond Kickers 4-2 to earn the No. 4 seed for the playoffs. The two teams will meet again next Saturday in Tucson in the first round.

Notes, quotes and stats from the Arizona Wildcats’ 41-34 loss to USC

Pertinent factoids, words and numbers from the Cats' setback against the Trojans.

Hear what Jedd Fisch said after Arizona's 41-34 loss to USC in Los Angeles.

The 24-year-old victim was found shot inside of a car early Saturday morning.

The Cats will finish the home portion of their schedule with back-to-back afternoon games.

The Cats host the Golden Bears for homecoming Saturday afternoon at Arizona Stadium. 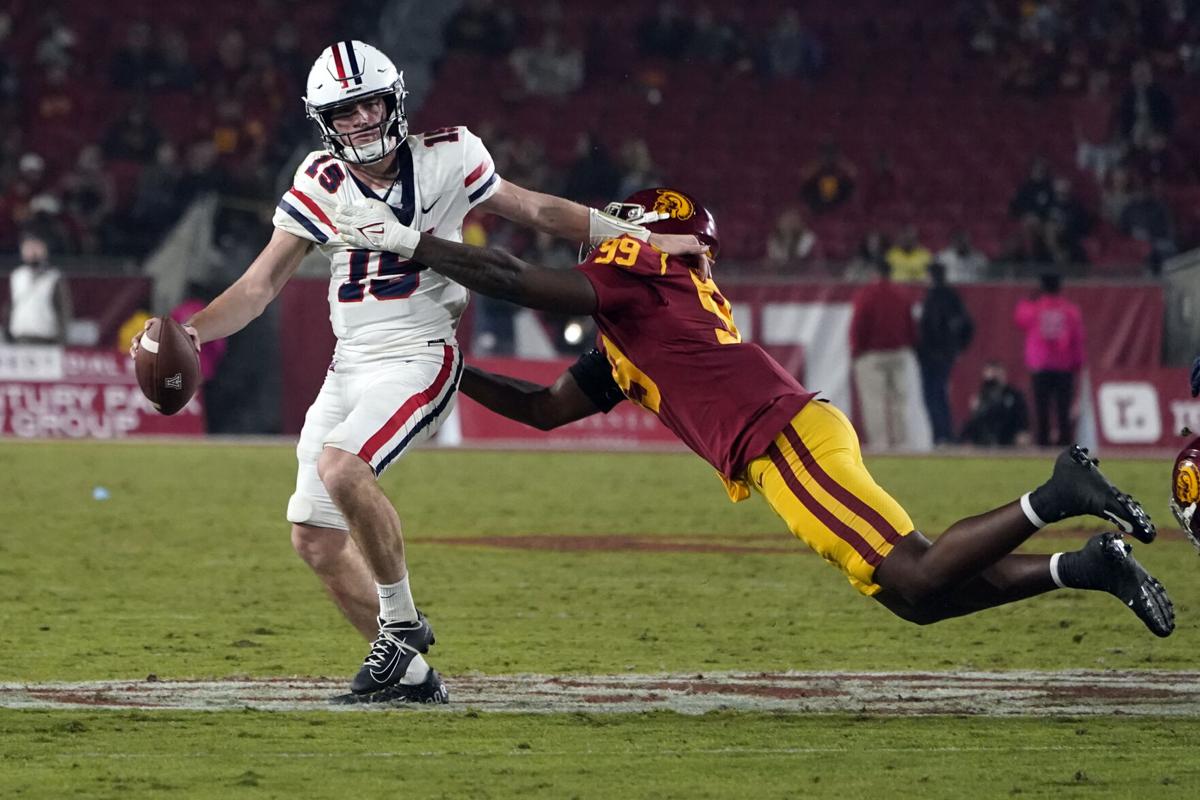 Arizona quarterback Will Plummer is pressured by USC linebacker Drake Jackson during the second half of Saturday's game. 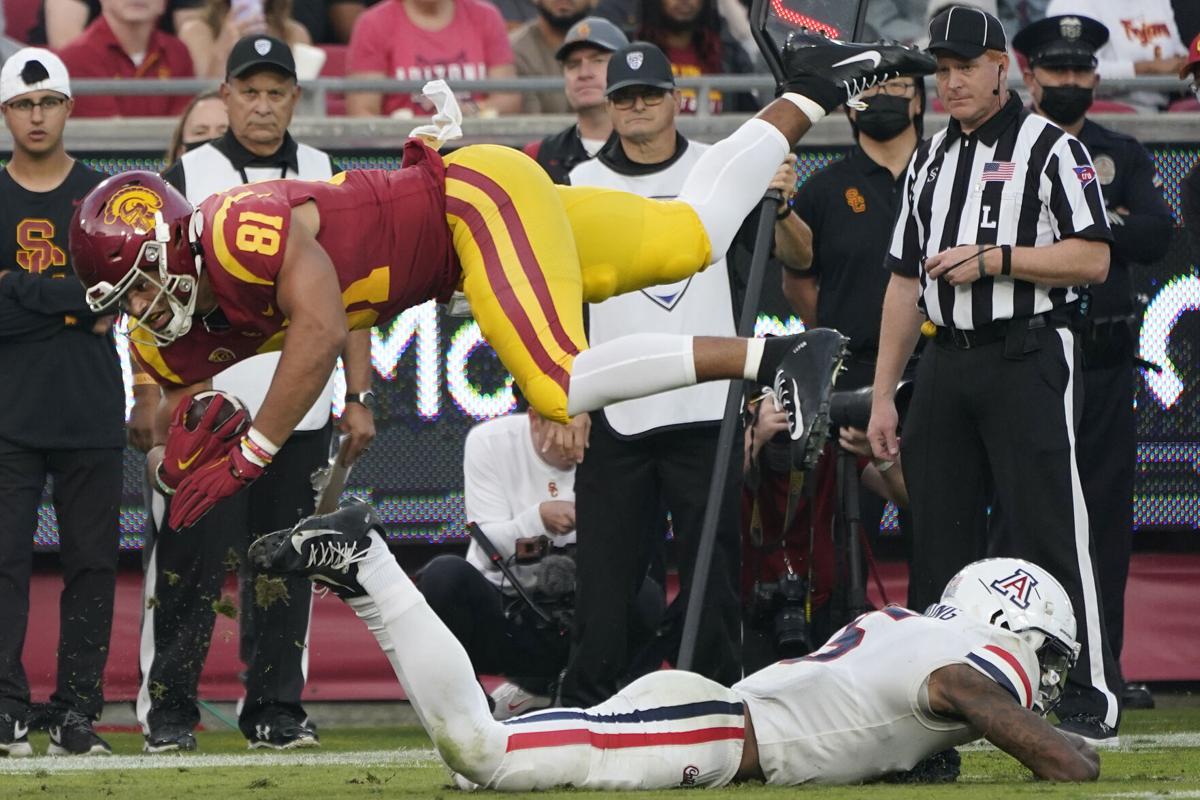 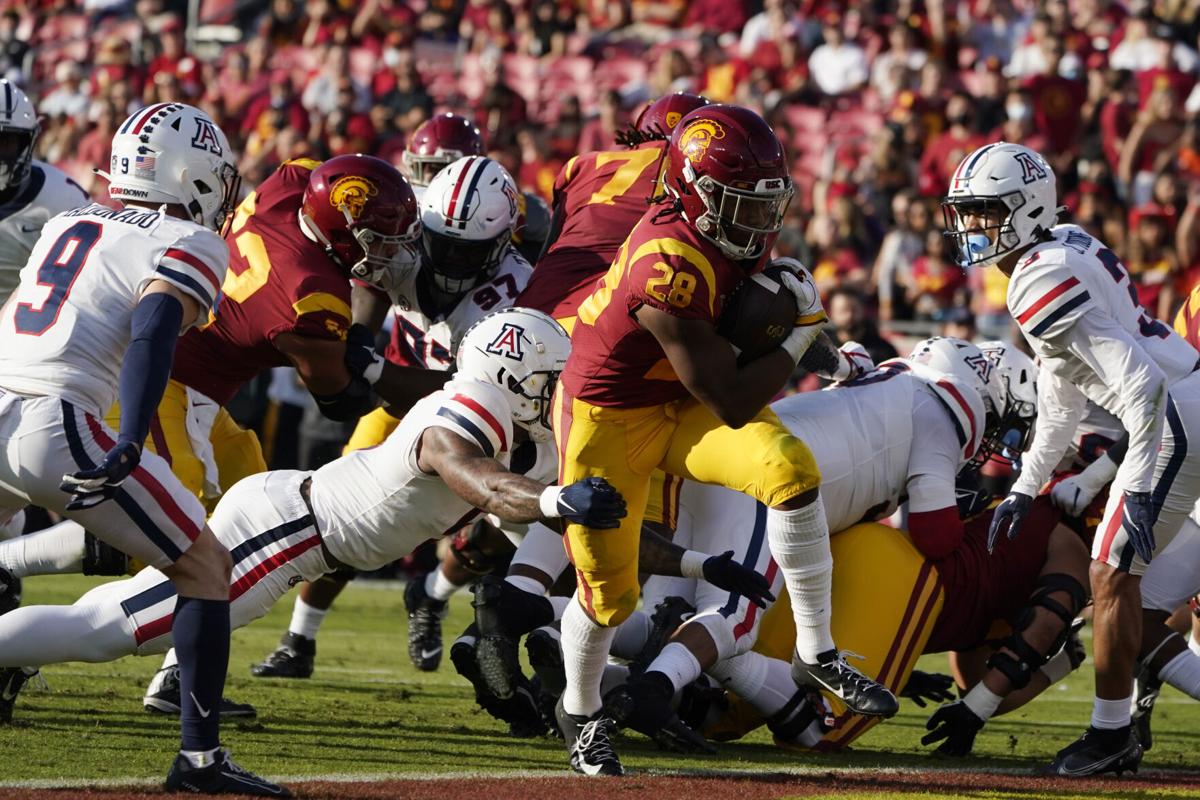 USC running back Keaontay Ingram scores a touchdown during the first half. 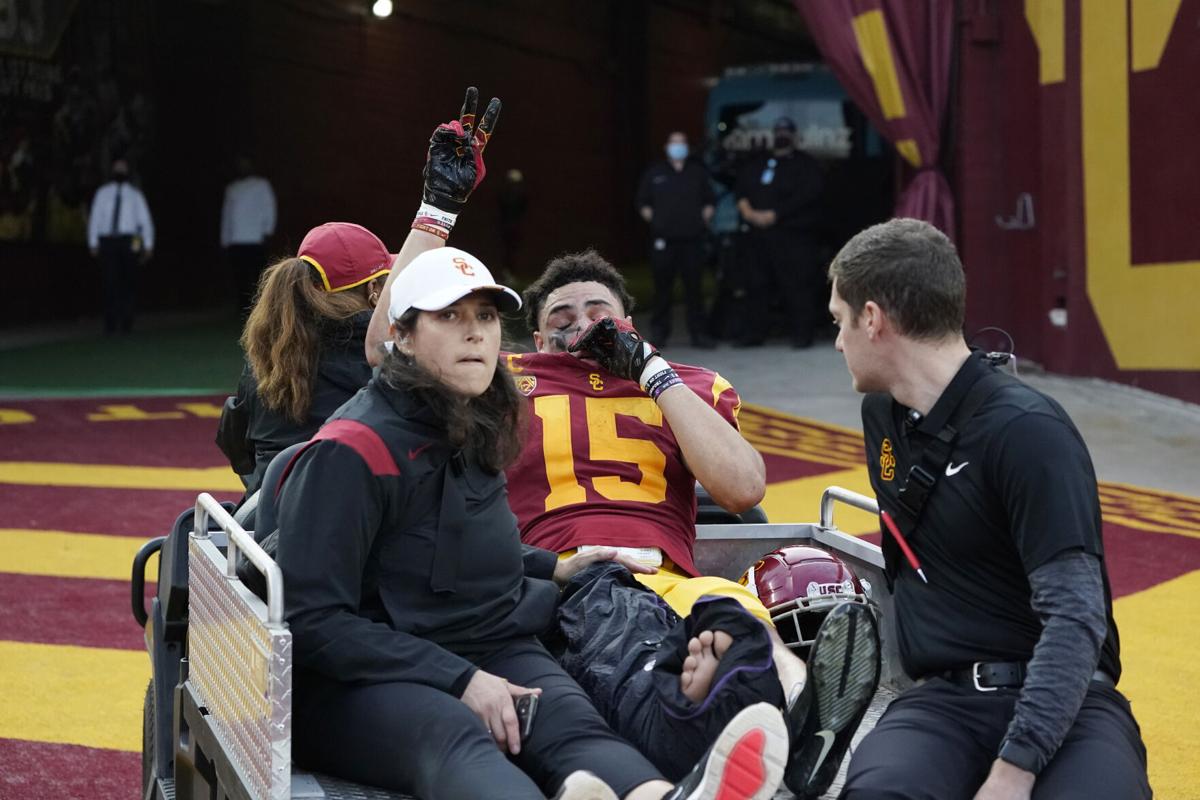 USC wide receiver Drake London waves to fans as he is carted off after suffering an ankle injury in the end zone after scoring a touchdown during the first half.