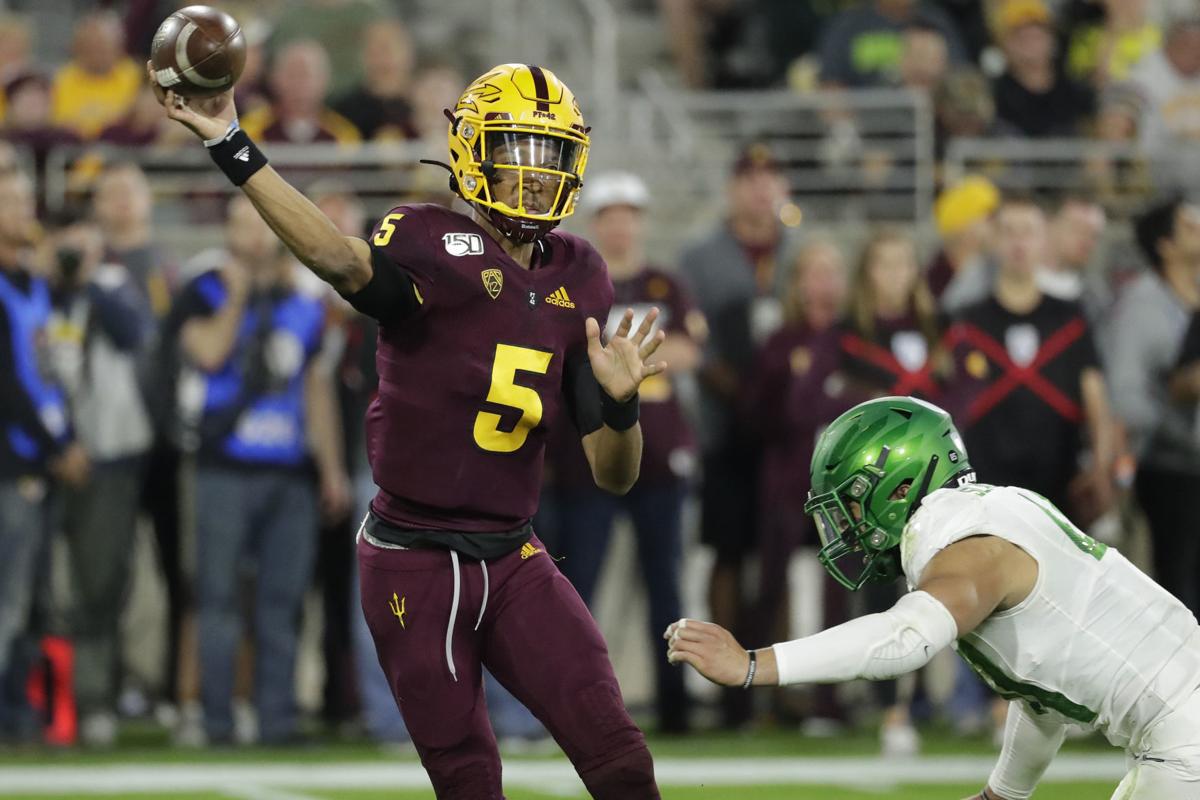 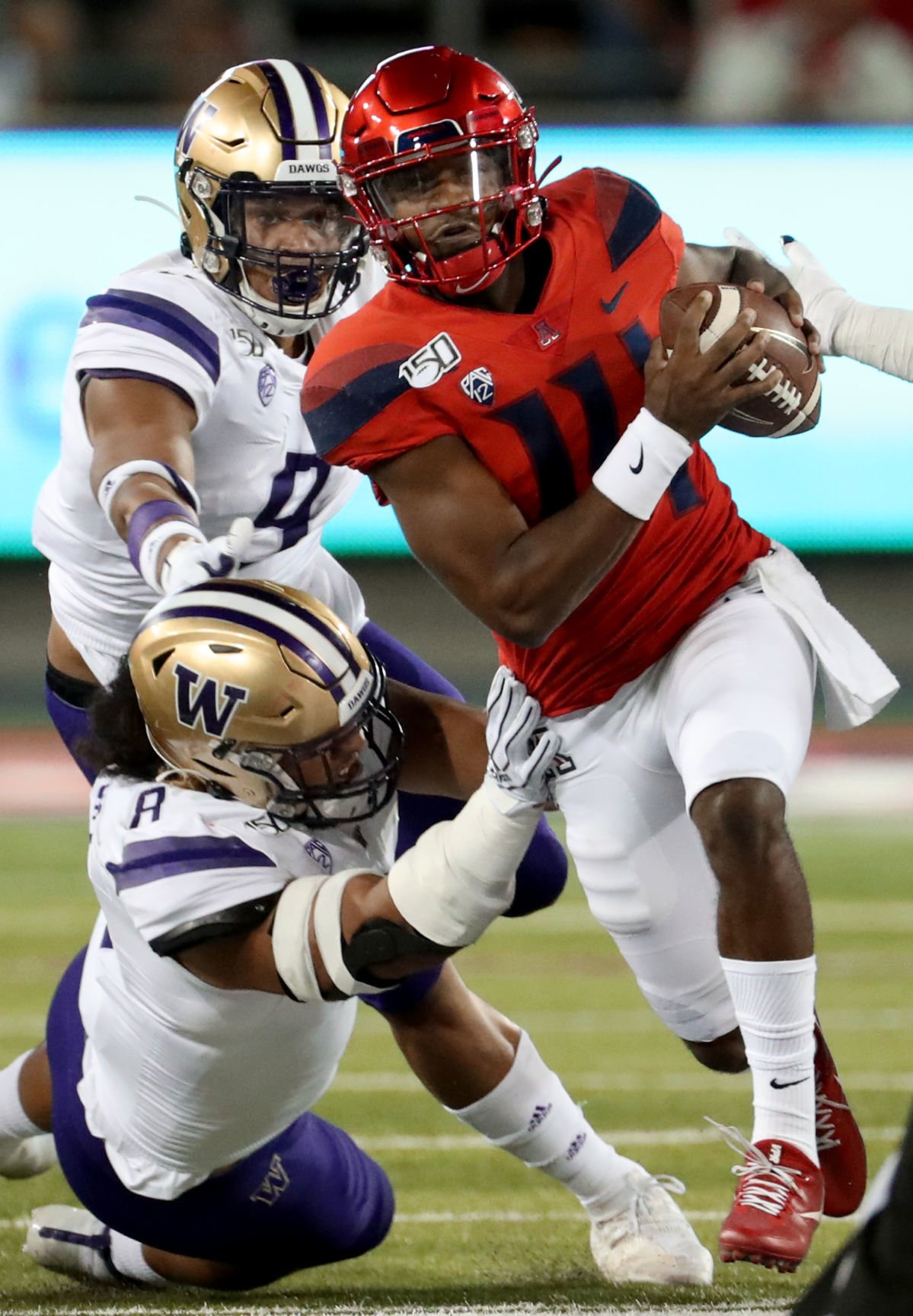 Quarterback Khalil Tate hasn’t started the last two games for Arizona, and it’s not yet known if he will start against ASU on Saturday in his final game as a Wildcat.

Two of the names have changed, but Arizona State again might have the best set of triplets in the Pac-12.

Quarterback Jayden Daniels is a strong candidate to win the conference’s Offensive Freshman of the Year award. Eno Benjamin remains one of the league’s top tailbacks. And receiver Brandon Aiyuk has emerged as the premier big-play threat on the West Coast.

Those three will lead a resurgent ASU offense into the latest Territorial Cup matchup against Arizona on Saturday night in Tempe. Wildcats coach Kevin Sumlin expects Daniels to be at his best coming off a career game in ASU’s upset of No. 6 Oregon last week.

“He played lights out,” Sumlin said Monday. “He’s getting better as a young player. He is understanding their offense better and better every week with the number of games that he’s played. But last weekend he was almost perfect.”

Daniels passed for a career-high 408 yards and three touchdowns in the Sun Devils’ 31-28 victory over the Ducks. Daniels was named the Pac-12 Freshman of the Week and the league’s Offensive Player of the Week. He has won the former a conference-high four times.

Daniels has thrown for 2,644 yards with 17 touchdowns and only two interceptions. Manny Wilkins’ successor ranks fourth in the Pac-12 with a 156.4 efficiency rating. The San Bernardino, California, product also has 257 rushing yards and has scored three TDs.

“I think he’s done a really nice job of operating and being consistent,” Sumlin said. “But I think Brandon has been a difference maker for them offensively.”

Whereas Harry dominated opponents with his size, Aiyuk is a burner.

He leads the Pac-12 in receiving yards per game (102.3) despite ranking eighth in catches (60). Aiyuk’s 18.8-yard average per reception also paces the conference.

Daniels’ 81-yard touchdown pass to Aiyuk late in the fourth quarter bumped ASU’s lead to 31-21 over Oregon after the Ducks had sliced their deficit from 17 points to three. As Sumlin noted, Aiyuk also leads the Pac-12 in kickoff- and punt-return average.

Benjamin led the league in rushing last season with a school-record 1,642 yards. He hasn’t been as effective this season, totaling 915 yards through 11 games. But Sumlin hasn’t detected any drop-off in Benjamin’s performance.

“He runs really hard,” Sumlin said. “He’s a driven player. He plays with a chip on his shoulder. … It’s obvious to me that he’s got something to prove.”

Benjamin was a four-star recruit coming out of Wylie, Texas. He initially committed to Iowa before switching to Arizona State, a decision that generated some controversy at the time.

Benjamin made his mark in the Territorial Cup last season, rushing for 80 yards and three touchdowns, including the winning score with 3:08 remaining to cap ASU’s comeback from a 19-point fourth-quarter deficit.

ASU has averaged 30.8 points in its past four games after being limited to three on Oct. 19 at Utah. Arizona can relate to that: The Wildcats scored just seven points in their loss to the Utes last week.

While they still rank in the top half of the Pac-12 in total offense, the Cats have fallen to the bottom of the league in total defense, run defense and points allowed. Arizona ranks 11th against the pass.

Although it will be his final game as a Wildcat, senior quarterback Khalil Tate isn’t a sure thing to start against the Sun Devils. Sumlin said the process would remain the same this week as it has the past two — an open competition between Tate and freshman Grant Gunnell. Gunnell started each of the past two games.

Sumlin was asked Monday why Tate’s career never fully took off after his breakout sophomore season in 2017. Considered a legitimate Heisman Trophy candidate entering last year, Tate struggled with injuries and with the transition to a new offense.

This year, Tate has just 12 TD passes and has been a part-time player over the latter half of his senior season.

“There’s a lot of different reasons. It’s never one thing,” Sumlin said. “Change of offense, change of philosophies, change of different things probably had a little bit or a lot to do with that.

“We want the best for all of our players. The quarterback position becomes a situation where there’s a lot more focus on that than … other players on the team.

“The results are the results. And that’s not just on the quarterback, that’s on everybody — offense, defense, special teams and me.”

Arizona might be able to get some of its injured offensive linemen back for Saturday’s game.

“We’ve got an opportunity to do that,” Sumlin said. “We’ll see where they are here. We’ve got a couple guys that are experienced that we’ve been missing for four or five weeks. I’ll know better by Wednesday.”

The Wildcats were down four linemen against the Utes, including season-long starters Josh McCauley and Cody Creason. Jordan Morgan and Paiton Fears started the previous week at Oregon and got hurt during that game.

Creason missed his fifth consecutive game last week, McCauley his second. Arizona did not have a single starter in the same spot against Utah as it did Oregon.

Another situation to monitor up front involves sophomore left tackle Donovan Laie. Laie’s father died unexpectedly over the weekend. Laie was with the team Monday but could head home to Oceanside, California, sometime later in the week.

Laie is the only UA lineman who has started every game this year. He hasn’t missed a start since joining the team in 2018.

• Sumlin said he seriously considered going for it on fourth-and-1 from the UA 34 in the first quarter against Utah but ultimately decided against it, in part because it was only 7-0 at the time. “There was a consideration of that,” Sumlin said. “There was (also) a consideration of a fake punt.” Sumlin decided against the latter because Utah kept its regular defense on the field.

• ASU ranks third in the Pac-12 against the run. Arizona just faced the top two run defenses in the league. “We’ve seen one and two the last two weeks,” Sumlin said. “Now we see No. 3 this week. They’ve got a great scheme up front. They play hard. We gotta figure it out.”

• Sumlin said the recruiting calendar played at least some role in his decision to dismiss three defensive coaches during the season. “That’s part of it,” Sumlin said. “But that’s not all of it.” The early signing period begins Dec. 18 — less than three weeks after Saturday’s season finale. “That’s right around the corner,” Sumlin said. “You basically have two weeks until the dead period (Dec. 16) to kind of close things down.”

How ex-UA Wildcats fared in NBA on Monday night

A Huachuca City woman was killed and a Sierra Vista man remains in a hospital after a head-on vehicle crash in Sierra Vista Tuesday, police say.

Quarterback Khalil Tate hasn’t started the last two games for Arizona, and it’s not yet known if he will start against ASU on Saturday in his final game as a Wildcat.