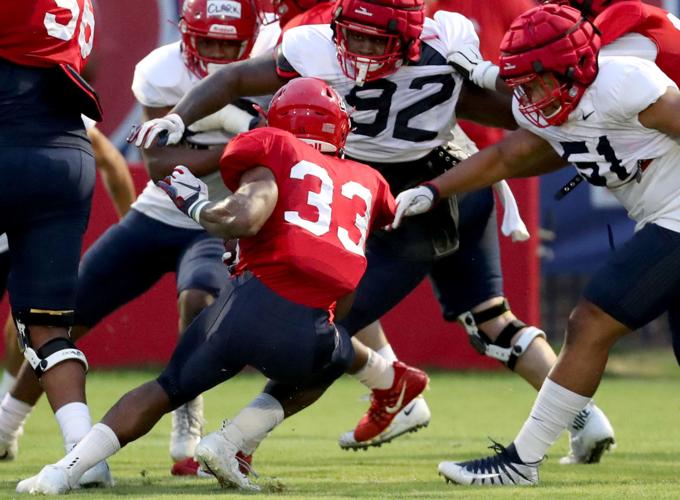 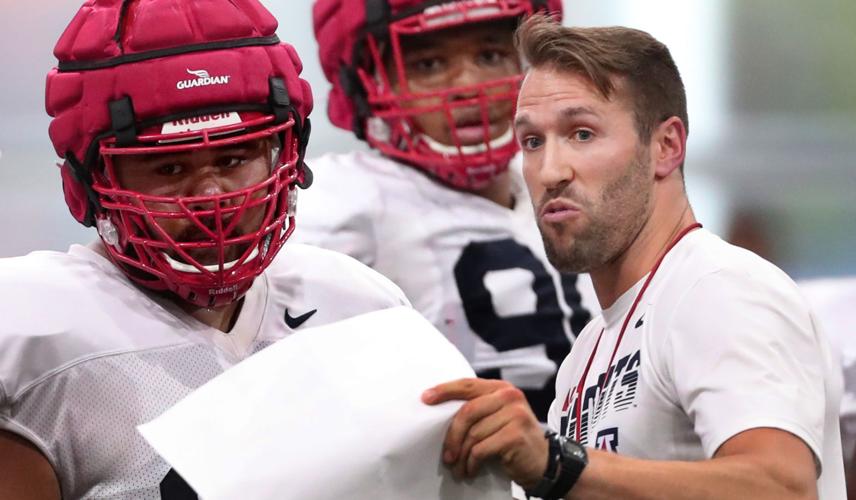 Myles Tapusoa, left, and Trevon Mason are expected to contribute to Arizona’s defensive line rotation. The Wildcats open their season next week.

The Arizona Wildcats’ defensive line coach was asked this week whether Kevin Sumlin’s wish would be fulfilled — whether the UA finally would have a legitimate rotation up front.

Not maybe. Not hopefully. Not probably. Definitely.

Uiagalelei’s confidence springs from a handful of promising developments. If promise turns into reality, the Arizona defense might be poised to take a leap that’s long overdue.

When he took over the program last year, Sumlin recognized the need for more bodies and beef on the defensive line. The Wildcats had struggled to stop the run and get off the field on third down – problems that persisted in 2018.

So Sumlin and his staff invested heavily in defensive linemen. The UA signed two junior college defensive tackles, Trevon Mason and Myles Tapusoa, hoping that they would be able to step in immediately for the departed PJ Johnson and Dereck Boles. After some fits and starts, that plan appears to be coming to fruition.

After overcoming conditioning issues, both JC transfers are slated for significant roles — possibly as starters.

“They’re doing a good job of understanding what we want from them and the job that they’ve got to get done,” Uiagalelei said. “I’m really impressed with where they’re at right now.”

Tapusoa enrolled in January. He missed a large portion of spring practice because of an unspecified injury. Sumlin suggested conditioning might have been a factor in Tapusoa’s prolonged absence.

Mason was supposed to arrive in January, but his enrollment was delayed until late July. He missed spring practice as well as summer workouts and had to be brought along slowly at the outset of training camp.

Three weeks later, Uiagalelei said, he has seen a “big difference” in Mason’s stamina. Tapusoa’s too. Their presence gives the Wildcats two 300-plus-pound defensive tackles to replace the ones they lost.

“When we recruit JC guys, we want them to come in and make an impact as soon as possible,” Uiagalelei said. “And they’re doing that.”

With Mason and Tapusoa ready to contribute, Arizona has been able to move JB Brown back to his natural position of defensive end. Fellow third-year edge rusher Jalen Harris will start on the other side. He and the other “Studs” have been working with Uiagalelei since spring as part of the Wildcats’ newfound commitment to a four-man front.

Assuming that’s the starting lineup next Saturday against Hawaii, the second unit would have an abundance of starting experience. Justin Belknap – who missed most of last season because of a foot injury – Kylan Wilborn and Finton Connolly have combined for 49 career starts. All three are upperclassmen.

The likely fourth member of that group is a bit of a surprise. Redshirt freshman Mykee Irving moved from defensive tackle to offensive guard in spring … and back to defensive tackle this summer. His career appeared to be adrift.

Instead, Irving became more focused. He dropped about 40 pounds in the offseason.

“He’s a lot more athletic,” Uiagalelei said. “He moves a lot better. His mindset is a lot different from last year (too). He understands what needs to be done, and he can accept the challenge.”

With more viable options than before, Uiagalelei and defensive coordinator Marcel Yates have been experimenting with different line combinations. One features four defensive ends on the field, with Brown moving inside.

Arizona’s coaches have specific recruiting responsibilities. They also have relationships that can lead to recruiting coups.

At least two such examples can be found on this year’s roster: defensive tackle Kyon Barrs and defensive back Samari Springs.

Barrs committed to Arizona in May — extremely late in the recruiting cycle — thanks largely to cornerbacks coach Demetrice Martin’s connections in Southern California.

“Kyon Barrs was a guy that was hidden, tucked away,” Martin said.

Initially, it appeared that Barrs, a product of Murrieta Mesa High School, wouldn’t be able to qualify for a four-year university.

“So a lot of schools fell off of him,” Martin said. “I stopped by (Murrieta Mesa) just to say hello. Coaches and athletic directors and principals were like, ‘Hey, coach, this kid is gonna make it.’ I’m like, ‘Oh, perfect. He fits a need for us.’ ”

Martin watched Barrs work out and felt it was a “no-brainer” to offer him a scholarship. Barrs has natural size (6-2, 299) and should factor into the rotation in time.

Springs played for two seasons at Richmond. Linebackers coach John Rushing heard Springs might be interested in transferring to a Pac-12 school via one of Rushing’s former teammates at Washington State, who’s a business partner of Shawn Springs, Samari’s father.

Shawn Springs played in the NFL for 13 seasons with Seattle, Washington and New England. He is the CEO of Windpact, which makes impact-reducing liners for football helmets.

“Shawn Springs brought him up here to meet us (during the offseason),” Rushing said. “It’s rare that you find a guy that late. He showed up, and his dad said he wants to be a Wildcat.”

Springs primarily played safety at Richmond but has been working at cornerback at Arizona. He’s expected to be a contributor on special teams and could be part of certain coverage packages in the secondary if he improves his technique.

The Athletic released its conference predictions this week, and none of the website’s three writers predicted Arizona would finish higher than fourth in the Pac-12 South. None had the Wildcats finishing better than .500 overall.

One of the writers, longtime college football reporter Bruce Feldman, had Arizona going 2-7 in conference play. The Wildcats finished worse than 3-6 only once over the past seven seasons — 1-8 in 2016, when they were devastated by injuries. Arizona finished 5-7, 4-5 in Sumlin’s first season.

It’s unclear if Arizona’s receivers will be better, but Wildcats’ wideouts are definitely bigger

The composition of the WR corps has changed under Kevin Sumlin, with a greater emphasis being placed on size and toughness.

The senior showed signs during training camp that he’s ready to run and recapture the form that made him a deadly dual threat two year ago.

The Arizona Wildcats released their first official depth chart of the 2019 season today. Below is a look at the offense heading into Saturday'…

Interactive: Everything you need to know about Arizona's 2019 football season

Check out the Wildcats' 2019 football schedule, players to watch and pore over Pac-12 stats. Test your Wildcat knowledge with our jersey number quiz!

Notes, quotes and stats from the Arizona Wildcats’ 45-38 loss to Hawaii

Pertinent factoids, words and numbers from the Cats' setback against the Rainbow Warriors.

The Star's exclusive, in-depth look back at the Cats' performance against the Rainbow Warriors.

Myles Tapusoa, left, and Trevon Mason are expected to contribute to Arizona’s defensive line rotation. The Wildcats open their season next week.