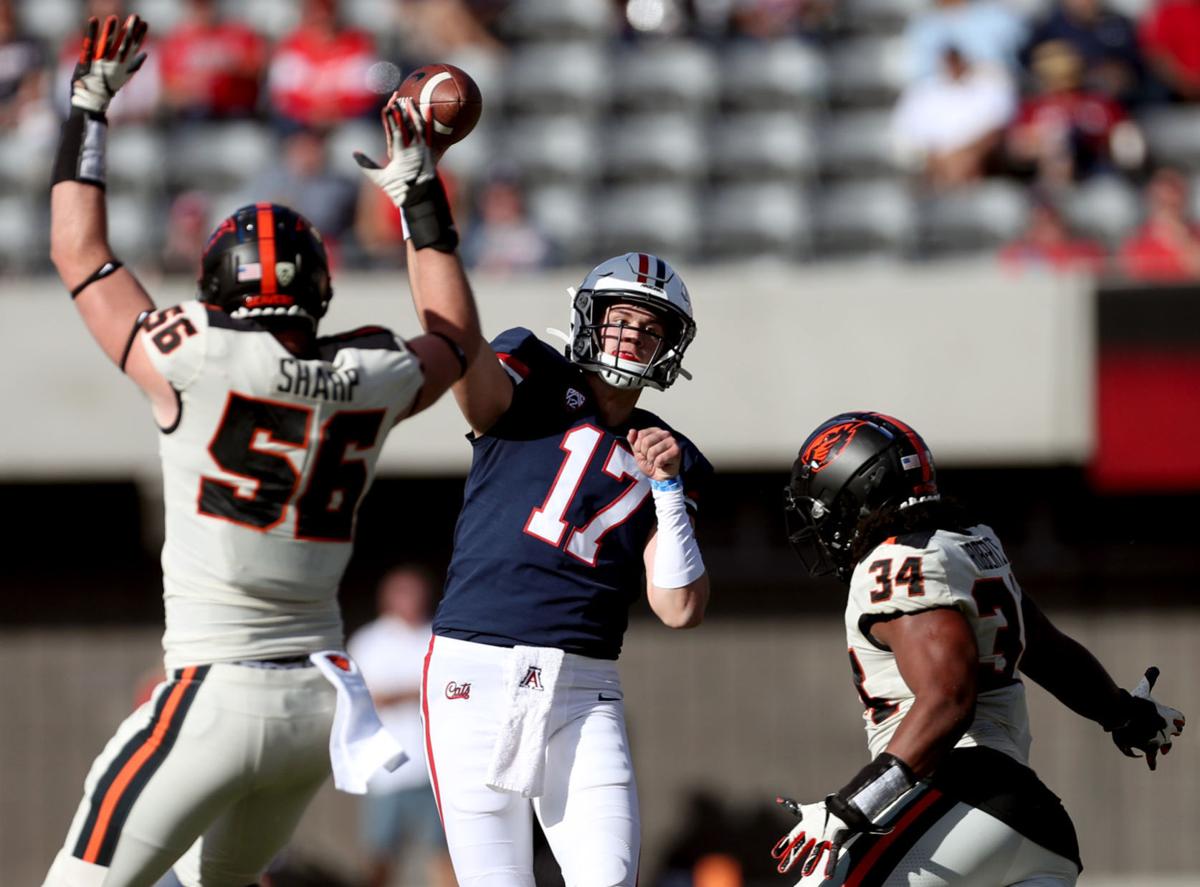 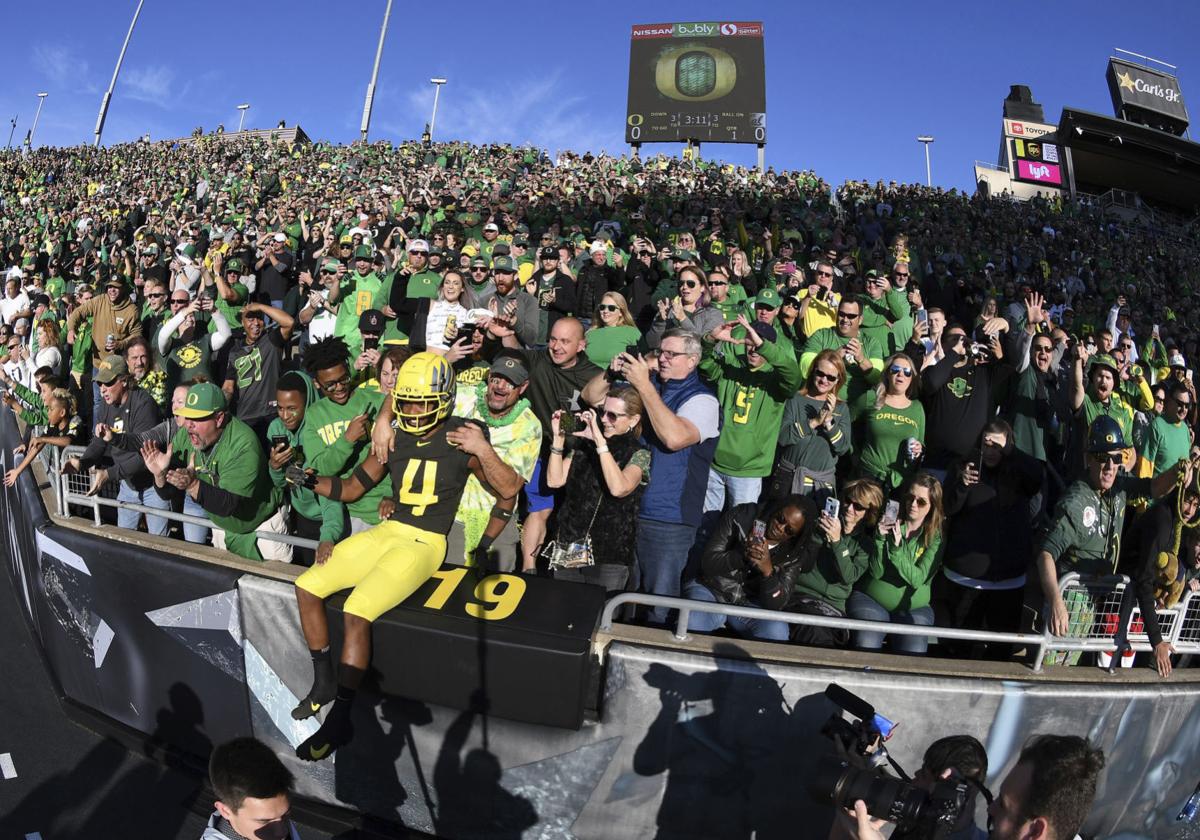 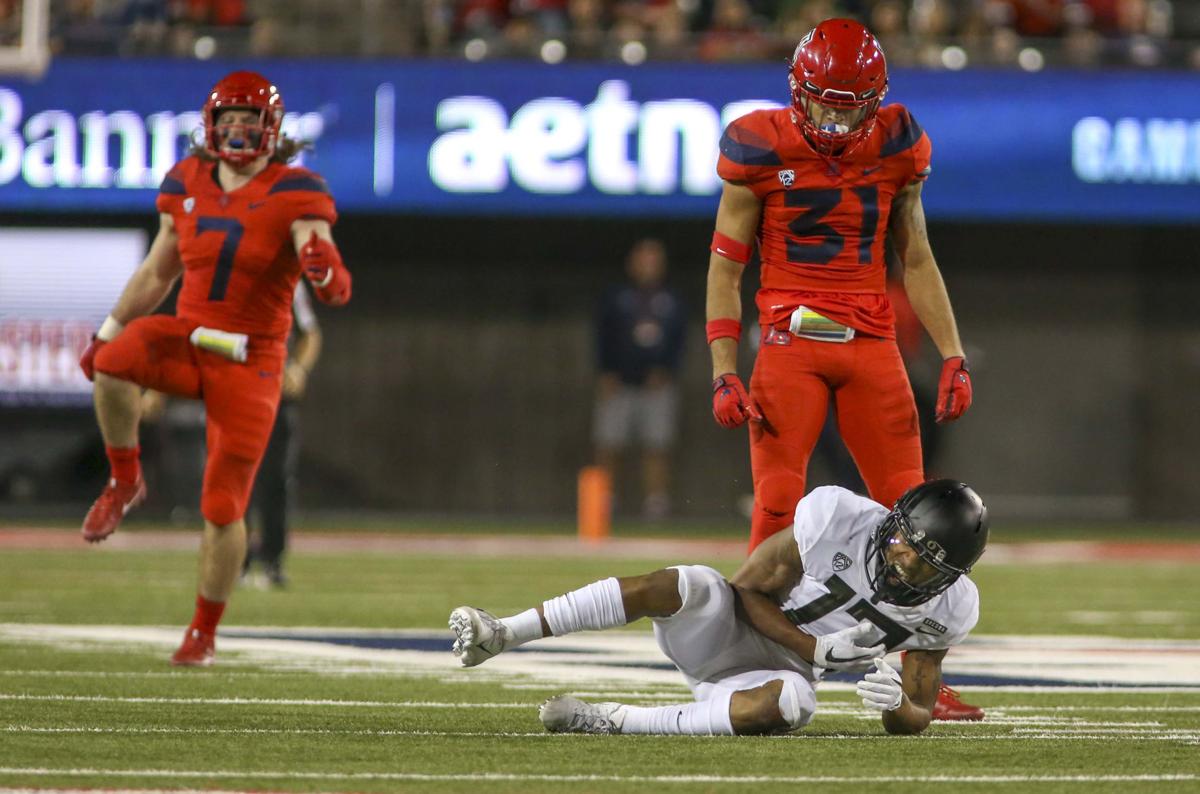 A reporter asked Arizona receiver Stanley Berryhill III for his response to the skeptics — the majority, really — who believe the Wildcats are about to get blown out at No. 6 Oregon.

“I don’t listen to the outside noise,” Berryhill said. “I just focus on our team and what we can do to play to the best of our ability.”

At Oregon’s Autzen Stadium, blocking out the noise is among the challenges every visitor faces. The game in Eugene on Saturday will be Arizona’s fifth road game of the season. It undoubtedly will be the loudest.

After a bye week focused on fundamentals, the Wildcats are working on ways to combat the noise that has discombobulated many an opposing offense.

Players made available to the media Tuesday talked about several keys to ensuring the UA offense runs smoothly. They mentioned practicing with music blaring in the background and the already prevalent use of hand signals and other non-verbal cues to communicate play calls and audibles.

Tailback Gary Brightwell said, “We came up with a game plan to scheme around the noise.” He was about to describe it before realizing it was best to keep it a secret.

Kevin Sumlin revealed Monday that Arizona could have a new starting quarterback Saturday. He said performance in practice would determine whether Khalil Tate or Grant Gunnell started against the Ducks.

Sumlin didn’t seem concerned about the possibility of Gunnell, a 19-year-old true freshman, leading the team in the Pac-12’s most boisterous building. Gunnell’s teammates indicated he would be good to go if called upon.

Gunnell has appeared in six of Arizona’s nine games. He has started once, at home against UCLA. He played in each of the Wildcats’ past two road games, against USC and Stanford.

Although he threw an interception on his first pass against the Trojans, Gunnell didn’t seem overwhelmed by his surroundings. He rebounded to throw a pair of touchdown passes, Arizona’s only two scores of the game.

And if Gunnell gets the nod at Oregon?

“I think he’ll be the Grant he normally is,” said center Steven Bailey, who subbed for the injured Josh McCauley against Oregon State and might have to again this week.

“He’s never way too up, never way too down. Even-keeled guy. Everyone likes him because of that — along with other things, of course.”

Players also cited scoring early as a means to dampen the noise. Gunnell has led touchdown drives on four of his six initial possessions in games. That’s a significantly higher rate than Arizona has managed as a team on opening drives; the Wildcats are just 1 of 9.

It’s different when you’re starting a game compared to coming off the bench. Gunnell faced less aggressive defenses in the fourth quarter against Washington and USC because those games were out of hand. Besides the pick vs. the Trojans, the only other time Gunnell failed to lead a scoring drive on his first crack came against UCLA – his lone start.

Arizona would go on to win that game. Tate returned the following week, leading the Wildcats to their lone road win of the season. He has struggled since.

“I think he’s gonna be fine,” receiver Brian Casteel said. “He seems like an older guy already. The way his attitude and effort is, he just seems like he’s a senior already.”

Whether it’s Gunnell or Tate behind center – both are expected to play, according to Sumlin – the offense understands the critical role it can play Saturday. Scoring early is one goal. Possessing the ball is another.

Not only would methodical drives quiet the crowd, they would keep Arizona’s struggling defense off the field.

Immediately after the OSU loss, Sumlin stressed the importance of staying together as a team. That means one side of the ball lifting up the other when necessary. It has gone both ways this season.

“Like Coach Sumlin said, we win or lose as a team,” Brightwell said. “We shouldn’t point fingers. No one’s perfect.”

Brightwell relishes the idea of silencing the crowd. It won’t be easy: Oregon, which has won eight straight, is favored by nearly four touchdowns. Arizona has lost four straight.

“I’m a fan of the noise, because I like to quiet it down,” Brightwell said.

“Then you just watch all the fans leave. It’s the best feeling.”

They have reached out to him on social media to let him know they haven’t forgotten his vicious hit on Ducks receiver Dillon Mitchell last season — or his controversial comments afterward.

“I already got some (grief),” Cooper said. “But it’s OK. I kind of like it like that. We’re on a big stage. That means we matter.

“I want people not liking us. Because if they don’t like us, obviously we’re doing something right.”

Cooper knocked Mitchell out of last year’s game, which Arizona won 44-15. The hit was deemed legal, and Cooper said the following about it a few days later:

“Hopefully he’s OK now. I didn’t know I hurt him. Hopefully he’s good and ready to go for this week. I wanted to make him feel the hit.”

Mitchell no longer plays for Oregon. His former teammates haven’t forgotten what happened either.

“I remember right after when (Cooper) said he meant to hurt D-Mitch,” receiver Jaylon Redd told reporters, per The Oregonian. “Everything is noted. We remember everything from last year — every single thing that went on that entire game. This is going to be a grinder, and we are going to war this week like this is the best team in the nation.”