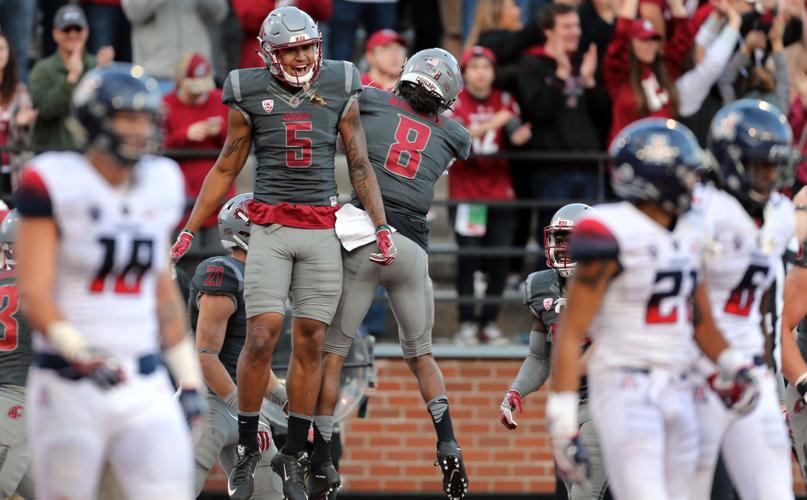 Washington State wide receiver Isaiah Johnson-Mack (5) celebrates with teammate Tavares Martin Jr. late in Washington State’s 69-7 win over Arizona a year ago. The Wildcats’ loss was the worst in modern porgram history, and a low point in what would be a 3-9 season. 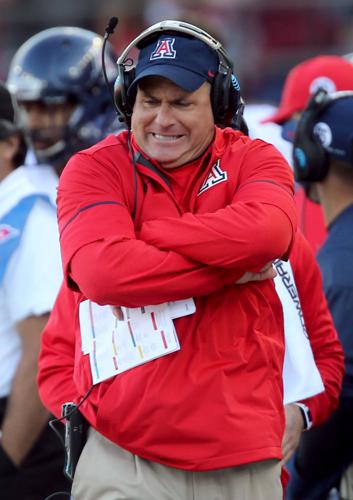 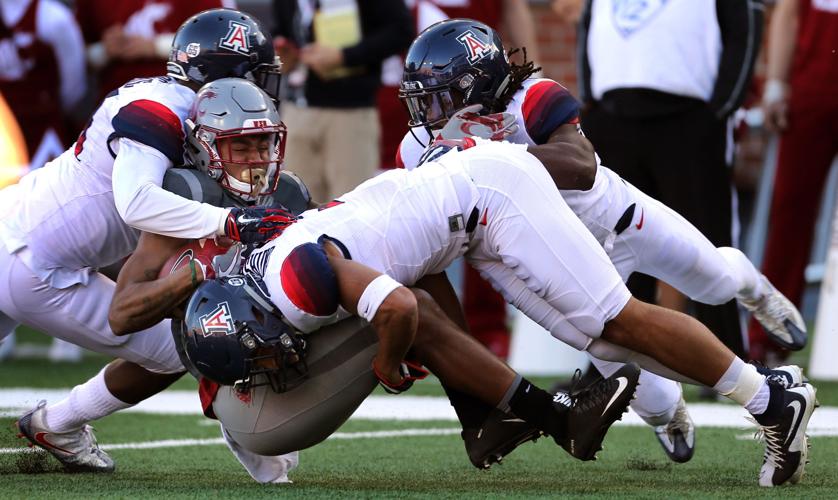 Choose your negative adjective. They all apply to Arizona’s 69-7 loss at Washington State last year.

Nov. 5, 2016, is a date that will live in infamy for the Wildcats. Arizona lost by more points than it had in any game since 1949. Cougars quarterbacks combined to complete 90.3 percent of their passes, the highest rate in FBS history with 30 or more completions.

“It was just bad, from start to finish,” UA safety Demetrius Flannigan-Fowles said Wednesday. “That’s not who we are.”

It’s not who the Wildcats are now. Much has changed for Arizona heading into Saturday’s rematch against No. 15 Washington State.

An infusion of young talent has bolstered the defense. The Wildcats have found their quarterback in Khalil Tate. And they’re winning.

Arizona is 5-2 overall and 3-1 in the Pac-12. Entering last year’s game in Pullman, the Wildcats were 2-6. They were five games into an eight-game conference losing streak.

Not only are the 2017 Cats more talented, but they have more bravado. They had little to none last year before the season-ending Territorial Cup.

“It was one of those games like, ‘Dang, we’re really this bad?’ It was just a really low moment, and we were down on ourselves after that game,” Flannigan-Fowles said.

“We weren’t confident and aggressive last year, and that led to a lot of miscues, a lot of MAs (missed assignments).”

Arizona is literally a different team. Roughly half the roster consists of freshmen and redshirt freshmen.

But just because the Wildcats are winning and playing well doesn’t mean either automatically will happen against the Cougars. Arizona still has to execute defensively after struggling in every conceivable way a year ago.

Washington State scored touchdowns on 9 of 13 possessions, including a game-ending kneel-down. Falk completed an astounding 32 of 35 passes for 311 yards and four TDs. The Wildcats didn’t sack him a single time.

It wasn’t the first time Falk had lit up the UA defense. In 2015, he passed for 514 yards and five scores in a 45-42 WSU victory. In two starts vs. Arizona, Falk has completed 81.4 percent of his passes with nary an interception.

“If you’re going to beat these guys, you’ve got to affect the quarterback,” UA safeties coach Jahmile Addae said. “You do that in two ways — you hit him and you confuse him. You’ve got to do both.

“He’s a pretty sharp kid, a seasoned vet. I think everybody in the country has thrown just about everything at him. There’s probably not a whole bunch he hasn’t seen.”

There’s nothing overly complex about Mike Leach’s pass-oriented offense. The Cougars “are just really good at what they do,” Addae said.

So the Wildcats need to be equally sharp with their reads, feet, hands and eyes.

“Last year we were sloppy in the small details — i.e., the eyes, the discipline, the fundamentals — and it showed,” Addae said.

It is possible to slow down Falk and the Cougars. Washington State scored only three points at Cal in its only loss of the season. (Arizona scored 45 points in Berkeley last week.) The Golden Bears forced seven turnovers and had nine sacks. They left Falk baffled and bruised.

UA coach Rich Rodriguez isn’t asking for a shutout (although that would be nice). He’s just looking for enough stops to keep the game competitive and allow his offense to dictate terms.

“We know they’re going to move the football,” Rodriguez said. “Falk is too good. The system, they understand it. They’ve got outstanding running backs, big O-linemen, three or four veterans up front.

“We’ve just got to make some stops. You’d like some three-and-outs, but stops or turnovers. Make some plays on the ball. We can’t play tentative.”

Rodriguez said it was tempting to throw out the film from last year’s game. But he and his staff forced themselves to review it anyway to figure out went wrong (short answer: everything).

“It makes me want to throw up,” Rodriguez said. “You can imagine, I’ve wanted to throw up all week.”

Rodriguez doesn’t need to regurgitate what happened last year. He hasn’t posted “69-7” banners all over the Lowell-Stevens Football Facility. Not much needs to be said when you lose by 62 points.

“Coach Rod always says 24 hours and move on, but it’s hard to forget something like that,” offensive tackle Gerhard de Beer said. “It’s one of the biggest embarrassments of my life.”

Tate ran a 4.56-second 40-yard dash at 220 pounds in spring. Only one quarterback at the 2017 NFL Scouting Combine posted a better time.

But Tate didn’t think he was fast or fit enough, so he dedicated himself to losing weight in the offseason. Tate dropped from a peak of 223 pounds last season to his current 208 by practicing harder, conditioning more and eating less.

Tate is averaging 13.9 yards per carry and has three touchdown runs of 70-plus yards.

“It was something I wanted to do,” Tate said. “I felt like I wasn’t performing to my fullest potential at the weight I was at. So I felt like if I lose weight, maybe that can change. It’s starting to change a little bit.”

Arizona Wildcats coach Rich Rodriguez is the fifth-highest-paid coach in college football this year, according to USA Today’s annual survey of coaches’ contracts.

About one third of that compensation comes from the master-limited-partnership provisions that Rodriguez and UA basketball coach Sean Miller have in their contracts.

The Star has reported details of Rodriguez and Miller’s contracts in the past, but USA Today’s story includes some critical dates and figures.

On March 15 of last year, Rodriguez was owed 25 percent of the publicly traded units allocated in the retention provision of his contract. If he remains coach on March 15 of next year, he will be owed the proceeds from the sale of another 25 percent. Those units are currently trading at $1.1 million.

USA Today also reported that if Rodriguez were fired without cause after March 15, 2018, he would be “owed a payment equal to the value of the remaining 50 percent of the units.” That would amount to about $2.1 million.

Rodriguez wouldn’t get any of that money if his contract were terminated without cause before March 15, or if he were fired for cause.

After a 3-9 season in 2016, the Wildcats have exceeded expectations. Behind sensational sophomore quarterback Khalil Tate and a productive freshman class, Arizona is 5-2.

An eight- or nine-win season would make Rodriguez an attractive candidate for other job openings. But the March 15, 2018, provision gives him incentive to stay. Additionally, Rodriguez’s son, Rhett Rodriguez, is a freshman quarterback on the team.

The buyouts for Saban, Swinney, Harbaugh and Meyer are all at least $20 million.

Former Arizona Wildcat stars continue to stand out on the big stage, none more than Lauri Markkanen and Aaron Gordon on Tuesday night. Markkan…

The Arizona Wildcats’ defense took some hits last week, but it appears three key defenders will have a good chance of playing against Washingt…

The Arizona Wildcats continue to pick up verbal commitments at a brisk pace.

Arizona loses a defensive back in its 2018 class.

What to watch for when the Arizona Wildcats host Luke Falk, No. 15 Washington State

Three things to keep an eye on as the Cats face the Cougars to cap homecoming tonight.

Arizona Wildcats RB Nick Wilson (ankle) dressed but not running with ones vs. Washington State

Washington State wide receiver Isaiah Johnson-Mack (5) celebrates with teammate Tavares Martin Jr. late in Washington State’s 69-7 win over Arizona a year ago. The Wildcats’ loss was the worst in modern porgram history, and a low point in what would be a 3-9 season.