Where did this Arizona Wildcats team come from? Where has it been?

Arizona had lost two in a row entering Saturday night. The Wildcats were one defeat away from needing to win three straight just to make a low-level bowl game.

Seemingly out of nowhere, the UA flipped the script against a familiar foil. Arizona stunned No. 19 Oregon 44-15 in front of a homecoming crowd of 42,845 at Arizona Stadium.

“It was a long time coming,” quarterback Khalil Tate said. “It was first time we actually played four quarters.”

With members of the 1998 UA team that finished 12-1 looking on, the ’18 Wildcats played a punishing brand of ball that would have made Dick Tomey proud. No play encapsulated that more than Tristan Cooper’s de-cleating tackle of Dillon Mitchell on an incomplete pass in the third quarter. Even at the end of the game, with the outcome decided, Azizi Hearn wouldn’t led Justin Herbert score.

Arizona took a page out of two more recent UA squads’ playbooks. The 2013 and ’14 Wildcats upset ranked Ducks teams as double-digit underdogs. The line for this game closed at Oregon minus-7.5.

Oregon was ranked second in the Pac-12 in scoring and total offense entering this weekend. The Wildcats held the Ducks to almost 25 points below their season average. Oregon’s 270 total yards were a season low.

Colin Schooler led the charge with 11 tackles, including 1.5 for losses. Tony Fields had a sack. Demetrius Flannigan-Fowles broke up three passes.

“We just had to come together and make sure everybody does their job and the energy is there,” Schooler said. “Coming into the season, I had really high expectations for our defense. I still do.”

The UA defense made Herbert look nothing like the No. 1 overall draft pick he’s projected to be. Herbert, who torched the Wildcats last season, completed 24 of 48 passes for 186 yards with two touchdowns and one interception.

Tate returned to the lineup after sitting out last week to rest a sprained left ankle. Tate didn’t do anything spectacular, but he managed the offense well. He finished 19 of 33 for 189 yards with three touchdowns and one interception. Tate also rushed for 26 yards on seven attempts.

The rushing star of the night was redshirt sophomore J.J. Taylor, who gained 212 yards on 30 carries. Taylor surpassed 1,000 yards for the season, becoming the first UA running back to do so since Nick Wilson in 2014.

Taylor capped his evening with a 19-yard touchdown run. He finished it by somersaulting over Oregon’s Thomas Graham Jr. — a play reminiscent of Ortege Jenkins’ famed “Leap by the Lake” at Washington in 1998. Jenkins just so happened to be in attendance Saturday night.

Arizona’s defense and special teams turned in a masterful performance in the first half.

The Wildcats limited the Ducks to 124 total yards and seven first downs. Arizona took the ball away two times and blocked a punt. Josh Pollack made three field goals.

The latter was good news and bad news.

Pollack continued to be money inside 40 yards. But each field goal followed a change-of-possession play that set up Arizona in prime scoring territory.

In the first quarter, PJ Johnson forced Travis Dye to fumble. Christian Young recovered the ball at the Oregon 21. Arizona couldn’t get a first down. Pollack’s 34-yard field goal made it 10-0.

Late in the first quarter, Scottie Young Jr. intercepted a scrambling Herbert at the UA 49. The drive stalled at the Oregon 14. Tate couldn’t hook up with a well-covered Tony Ellison in the end zone on third-and-6. Pollack’s 32-yarder made it 13-0.

Arizona’s defense continued to stymie Oregon on the next possession, forcing its fifth three-and-out of the first half. The Wildcats’ special teams then stepped to the forefront.

None of those missed opportunities ended up mattering.

After Oregon cut its deficit to 16-8, Arizona put together an epic 18-play, 88-yard touchdown drive late in the second quarter. Taylor converted a fourth-and-1 and later scored from the 1 to bump the lead to 23-8 at halftime.

Even a Tate interception on the first play of the second half couldn’t derail the upset bid. The UA defense forced yet another three-and-out, and the offense put together a seven-play, 96-yard touchdown drive. It began with Taylor’s 64-yard run. It ended with Tate’s 8-yard TD pass to Shawn Poindexter, who also scored the game’s first touchdown.

The win lifted Arizona to 4-5, 3-3 in the Pac-12 heading into a Friday-night home game against Colorado. The Buffaloes blew a 31-3 second-half lead and lost 41-34 to Oregon State in overtime earlier Saturday.

Finally, after two months of trial and error — mostly error and a lot of injuries — Mazzone’s lab work became a thing of beauty.

Seen and heard: On Justin Herbert's flop, celebrating the past, and Wildcats of the future

The Arizona Wildcats upended No. 19 Oregon in a 44-15 shellacking on Saturday night in front of some of the program's best teams and prospects…

Justin Spears and Michael Lev analyze Arizona’s blowout win over No. 19 Oregon. Did the Wildcats put together their first complete game of the…

Notes and takeaways from warmups before the Cats-Ducks game at Arizona Stadium.

Notes, quotes and stats from the Arizona Wildcats’ 44-15 victory over Oregon

Pertinent factoids, words and numbers from the Cats' upset win over the Ducks.

The Star's exclusive, in-depth breakdown of the Cats' season-changing performance against the Ducks. 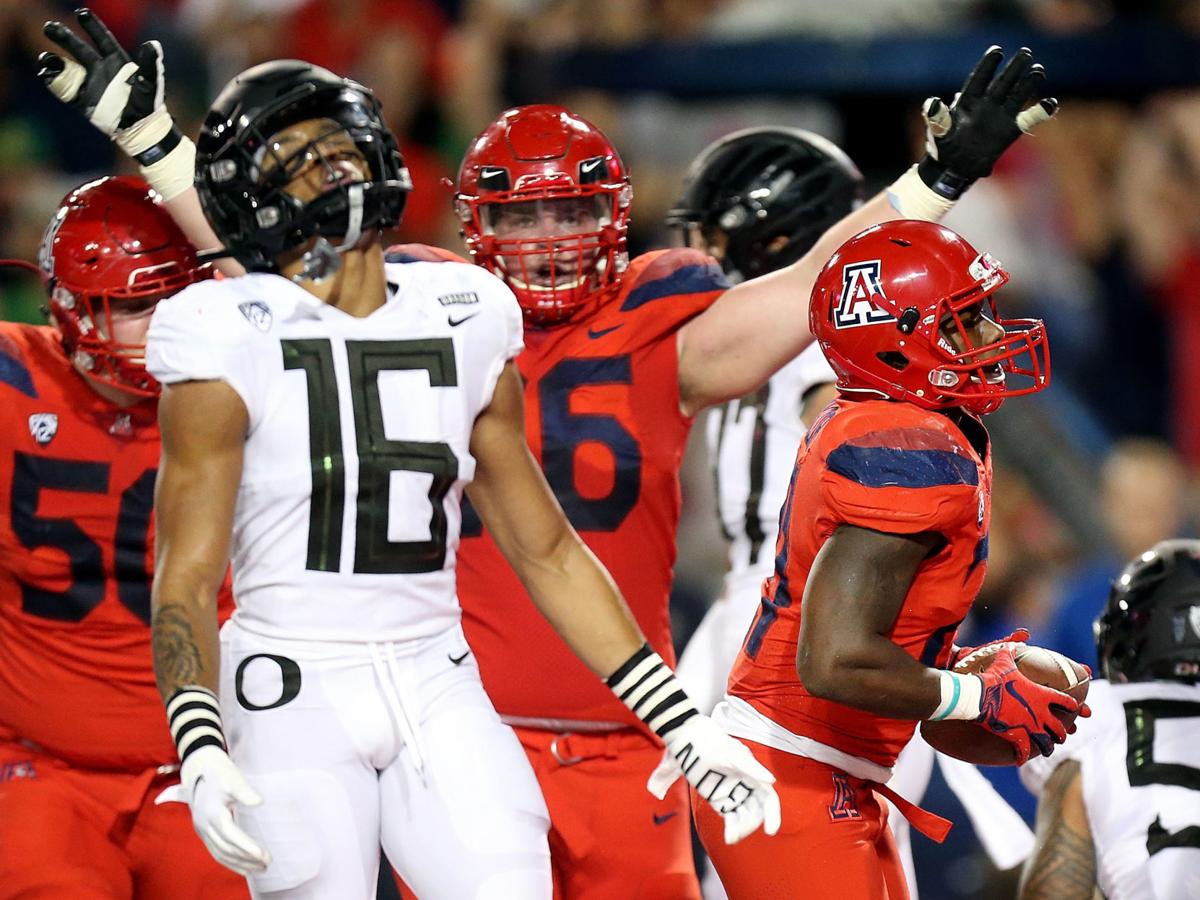 Arizona Wildcats running back J.J. Taylor (21), right, scores a touchdown to the dismay of Oregon safety Nick Pickett during the second quarter of Saturday night’s win over the No. 19 Ducks. 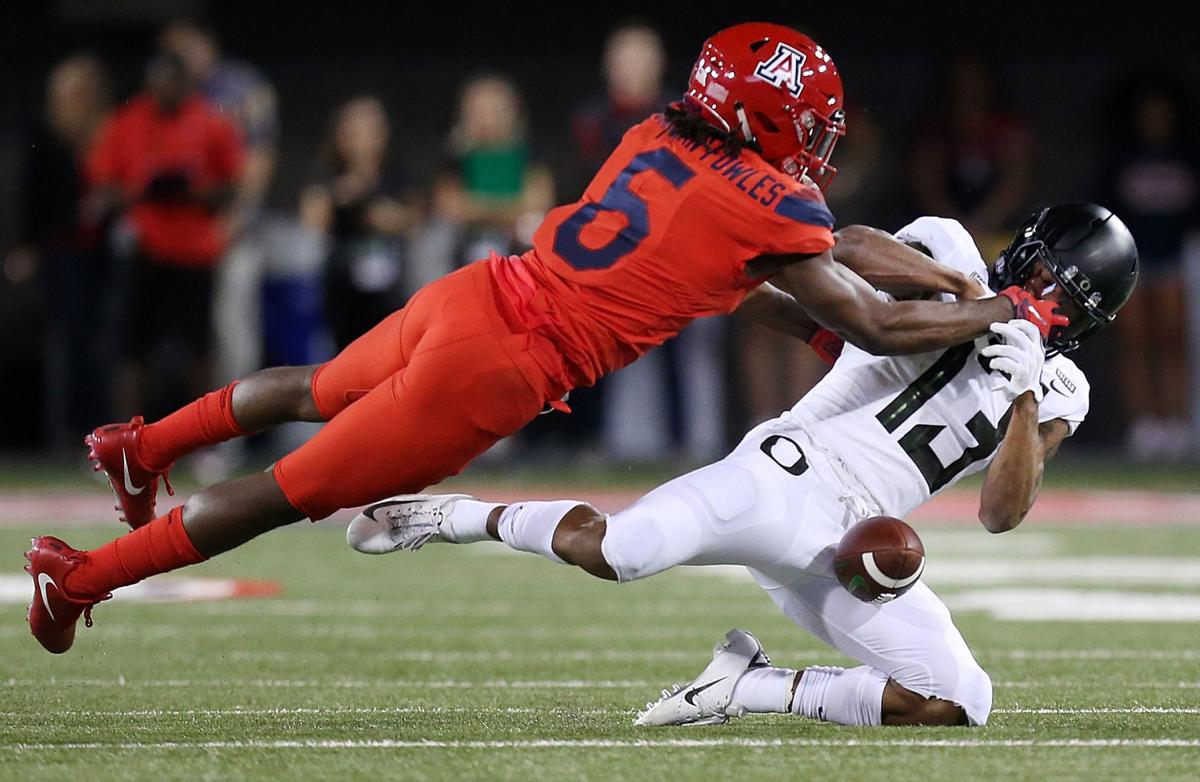 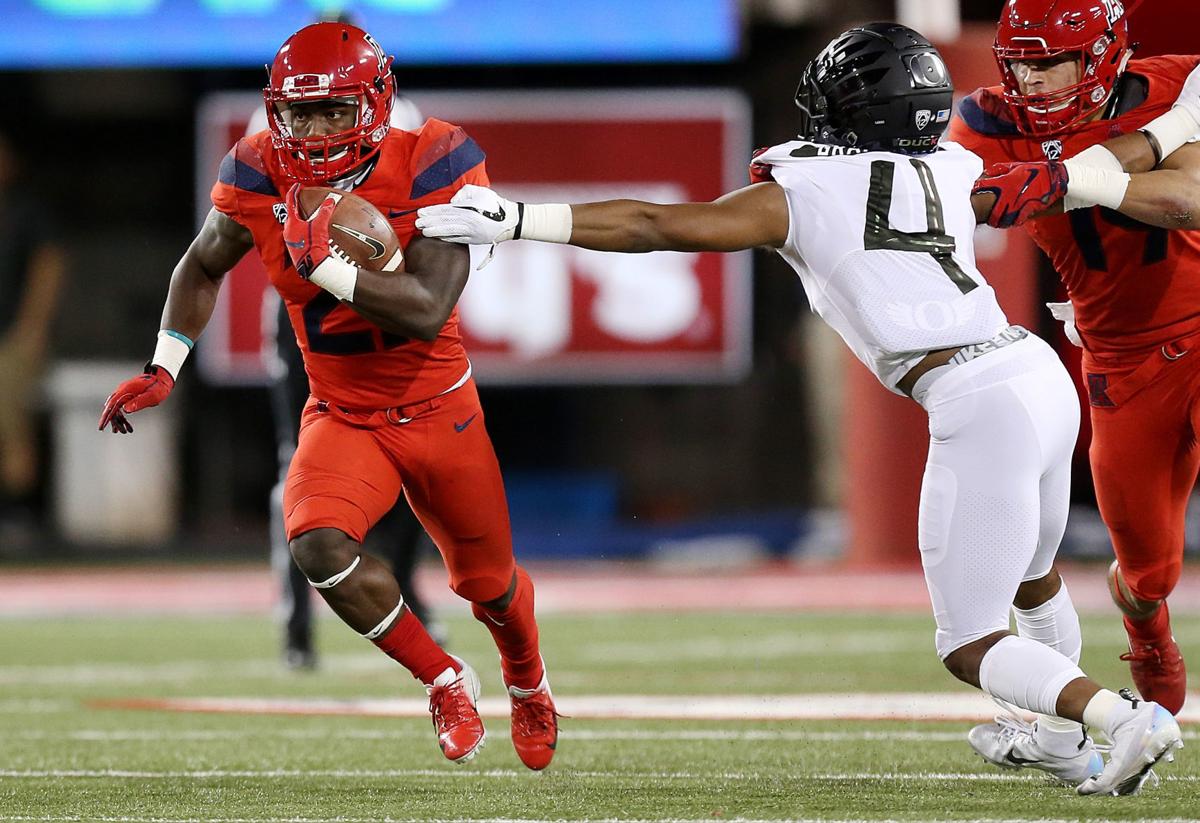 Arizona running back J.J. Taylor, left, found room all night as he became the first Wildcats back to run for more than 1,000 yards on a season since Nick Wilson in 2014. Taylor finished with 212 yards on 30 carries.