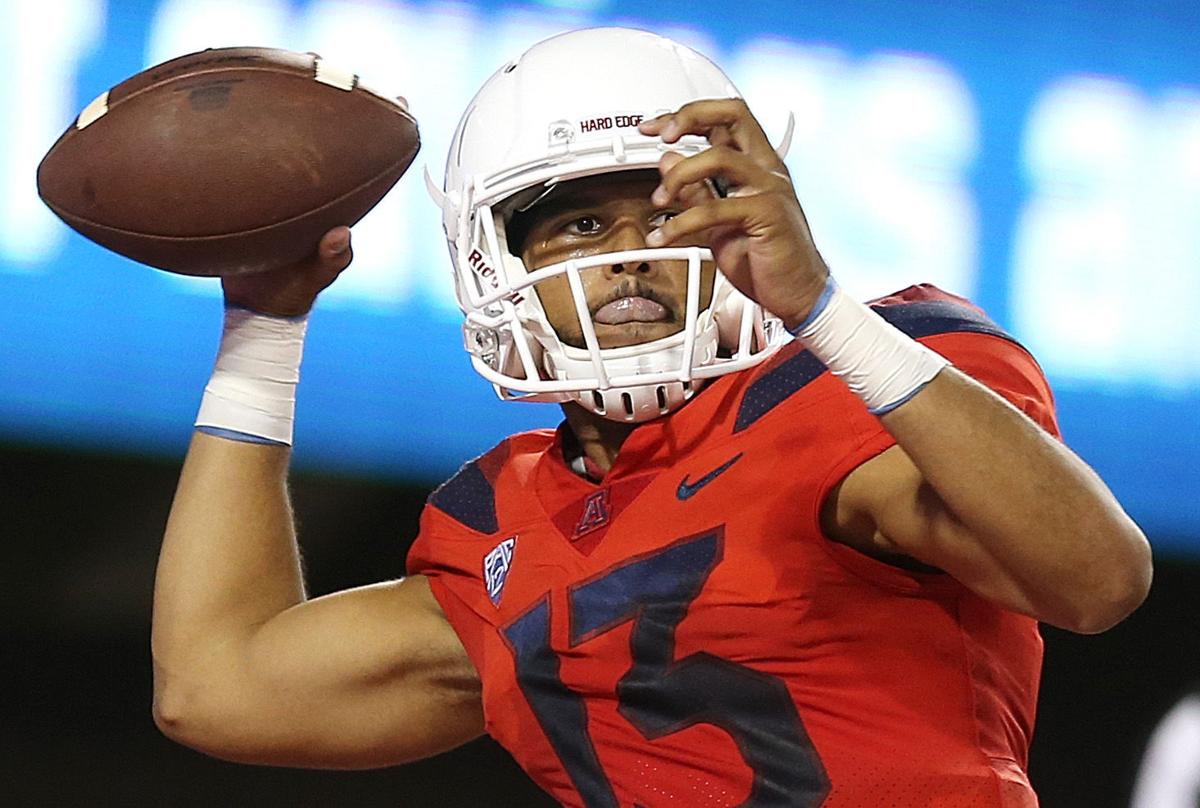 Brandon Dawkins had to attempt only 13 passes as the UA ground game chewed up over 500 yards in Saturday’s season-opening win over Northern Arizona. The Wildcats may have to air it out more when Houston visits this week. 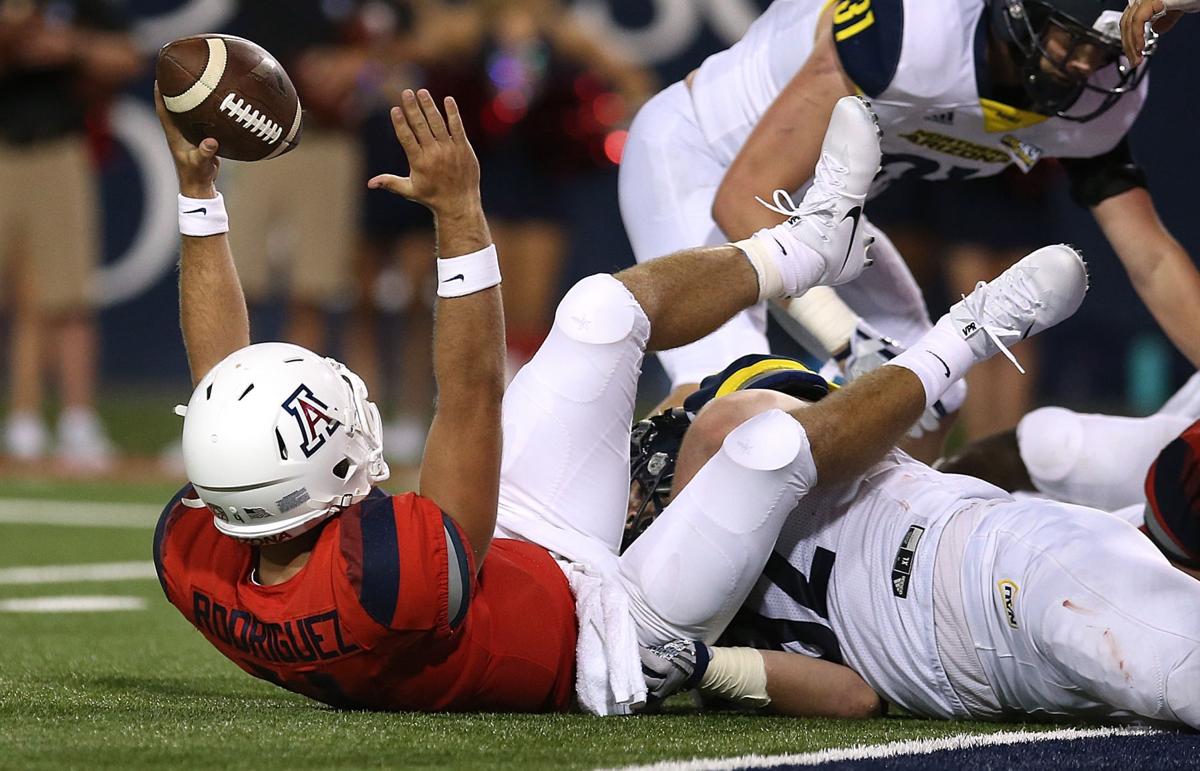 Freshman quarterback Rhett Rodriguez, a Catalina Foothills grad, got his chance when Khalil Tate went down with an injury, and responded with a touchdown run in the 62-24 victory.

“Ours?” Rodriguez responded. “Was there one?”

Rodriguez was only semi-joking. The UA didn’t throw the ball very much, or very effectively, in its season-opening 62-24 victory over Northern Arizona.

Arizona didn’t have to in order to defeat NAU. In a game that evolved into a facsimile of last year’s Territorial Cup, the Wildcats rushed for more than 500 yards and barely threw the ball in the second half. Against Arizona State, the UA didn’t attempt a single pass after halftime. Against NAU, Arizona quarterbacks went 1 for 2.

Starting QB Brandon Dawkins said he didn’t mind handing the ball off, or running it himself. It was working.

“It just depends how the team plays us,” Dawkins said. “We’re a team that’s built on having a triple-option attack: We can throw the ball, we can run the ball with our running backs or I can run the ball. So whatever a team does, we just gotta make sure we don’t let them be right, and that’s when our offense is most effective.

“If they’re going to sit back and take away the pass game, I don’t care if I hand it off to J.J. (Taylor) and Nick (Wilson) for 600 yards. If they’re putting up big numbers and putting points on the board, that’s good in my book.”

But what happens if it doesn’t work? What happens if Arizona meets an opponent that shuts down its running game? Will the Wildcats be able to counterstrike through the air?

That scenario could unfold Saturday against Houston. The Cougars’ defensive line features Ed Oliver, whom NFL.com ranked as the No. 1 player – regardless of position – in college football.

After the NAU game, Rodriguez reiterated his belief that Dawkins will “keep getting better.” His performance against the Lumberjacks — admittedly a small sample size — did not provide any obvious evidence that Dawkins and the passing game have improved significantly since last season.

Dawkins completed 7 of 13 passes for 89 yards. Forty-three of those came on a completion to Tony Ellison that traveled about 3 yards in the air. One other Dawkins-to-Ellison hookup went for 15 yards. Every other completed pass gained 7 or fewer.

Nonetheless, Rodriguez committed to Dawkins as Arizona’s starter moving forward — a step the coach was unwilling to take publicly before Saturday night.

Rodriguez said the plan was to “play Dawkins until we felt secure, unless he was playing poorly.” Despite multiple misconnections on deep passes — including a sure touchdown to Shawn Poindexter — Dawkins helped move the offense.

He rushed for 92 yards and two touchdowns, one covering 66 yards. He left midway through the third quarter with Arizona leading 48-14.

Sophomore Khalil Tate — who had been listed as a co-starter on the depth chart — entered in relief. He missed on his lone pass attempt but rushed for 62 yards on six carries.

Tate left the game in the fourth quarter because of what appeared to be a shoulder injury.

“Khalil got a little banged up because he likes to try to run over people, and that’s not a good idea when you’re a quarterback,” Rodriguez said, adding that he didn’t think Tate’s injury was serious.

With Tate unavailable and the game in hand, Rodriguez turned to his son, Rhett, to run the offense. The freshman from Catalina Foothills High didn’t attempt a pass but did direct a scoring drive, which he capped with a 1-yard touchdown run.

Although undoubtedly a thrilling moment for the Rodriguez family — many of whom attended the postgame news conference — Rhett’s college debut didn’t evoke strong emotions in his father. At least not in the moment.

“When Rhett goes in there,” Rodriguez said, “I’m looking at ‘What plays are we calling with him as the quarterback?’ as opposed to ‘That’s my son.’ ”

Rodriguez said Rhett and fellow freshman Donavan Tate, who didn’t play, “are like 3A and 3B” in the QB hierarchy.

“I wouldn’t hesitate to put Donavan in the game either,” Rodriguez said.

Ellison finally started to fulfill the promise he has displayed in practice. He finished with five catches for 79 yards and a touchdown — all career highs for the redshirt junior.

“Tony has been a guy I’ve really been waiting for (for) a couple years,” Rodriguez said. “All of our guys have seen it in practice. He’s an explosive, quick-twitch guy. He’s really good in the open field. I know he got one of them. But there’s still more to come.”

While he struggled at times to connect with other receivers, Dawkins had no such trouble with Ellison. Dawkins attributed their chemistry to hours upon hours of practice reps.

“Tony’s just been a workhorse,” Dawkins said. “He’s always one of those guys that wants to get extra and take it serious. I feed off that.

“It’s just getting that timing down. I’ve been with him a few years now, so we’re on the same page and we gotta make sure we keep that ball rolling.”

Arizona was feeling good on Saturday night after a decisive 62-24 victory over NAU to open the 2017 season.

By Sunday morning, the Wildcats already had a loss for 2018. That is, in recruiting — IMG Academy (Florida) defensive tackle Josh Walker announced that he was decommitting from Arizona and re-opening his recruitment.

"After many talks from me and family I have decided it's best I re-evaluate my recruiting process and withdraw my commitment from the University of Arizona," Walker wrote on Twitter.

Walker was Arizona's highest-rated recruit in the 2018 class so far, rated three-stars by Scout.com and the No. 5 defensive tackle in Florida. Walker's commitment in the first place back on Aug. 1 came as something of a surprise. Before his commitment announcement, Arizona State was believed to be the favorite for Walker, and the Wildcats weren't even included in a list of his top-three schools that he'd released a week earlier.

The 21 best-selling albums of all time

At 33 million certified units sold, the best-selling album of all time has achieved triple-diamond status — the only album to do so.

The Star's exclusive, in-depth look back at the Wildcats' season opener vs. the Lumberjacks.

The UA’s first-game nerves are out of the way, but the Cats don’t have any Week 1 film on the Cougars after they postponed their opener.

Highlights of the UA's media availability after practice Tuesday morning as preparations for Houston continue.

The UA has to keep the future pro out of the backfield. Many others have tried and failed.

DT Dereck Boles started, played through the flu in his Arizona Wildcats debut

Highlights from the UA's media availability after practice Wednesday morning as prep for Houston continues.

What to watch for when the Arizona Wildcats host Houston

Three things to keep an eye on in the Cats' Week 2 game against the Cougars at Arizona Stadium on Saturday night.

Brandon Dawkins had to attempt only 13 passes as the UA ground game chewed up over 500 yards in Saturday’s season-opening win over Northern Arizona. The Wildcats may have to air it out more when Houston visits this week.

Freshman quarterback Rhett Rodriguez, a Catalina Foothills grad, got his chance when Khalil Tate went down with an injury, and responded with a touchdown run in the 62-24 victory.