Arizona is still searching for a starting quarterback. The Wildcats are still seeking their first victory. The two are not unrelated.

QB instability has been a constant during Arizona’s school-record 15-game losing streak. It began under Kevin Sumlin and has continued under Jedd Fisch.

As of Monday, Fisch wasn’t sure which direction the UA would go at quarterback heading into Saturday’s Pac-12 opener at No. 3 Oregon.

Gunner Cruz started the first two games before being benched in the third quarter of Week 2. Will Plummer took his place ... and got pulled in the fourth quarter of last week’s 21-19 loss to NAU. Jordan McCloud, running third in the QB battle entering the season, relieved Plummer and came within a 2-point conversion of tying the score.

Fisch said all three quarterbacks will be evaluated in practice Tuesday and Wednesday. A decision will be made at some point this week. Even then — with a bye upcoming — it might not be permanent.

“What’s the best way to move forward? We’ve got this week and then a bye week, and then we go eight (weeks) in a row,” Fisch said. “Can we get to that point ... that we’re able to go with one guy (and) let him be the starter throughout?”

Arizona hasn’t reached that point yet. The quarterback play has been inconsistent, one of several reasons the Wildcats are 0-3.

Although far from perfect, Cruz showed great promise in the season opener. He passed for 336 yards against BYU, which is undefeated and ranked 15th in the Associated Press Top 25.

But Cruz and the Wildcats barely could make a first down the following week against San Diego State (which is also unbeaten). He had just 70 yards well into the third quarter upon being lifted.

Plummer performed well in relief, and Fisch decided to start him and give him most of the first-team practice reps last week. After a solid start, Plummer faltered. He threw two interceptions against the Lumberjacks, including one that was returned for a touchdown.

After the second pick, Fisch turned to McCloud. After an initial three-and-out, McCloud led a touchdown drive. The 2-point try failed.

In his postgame address, Fisch said he didn’t want to get stuck in a never-ending cycle of QB changes.

“It’s a very frustrating situation being in this quarterback derby,” he said. “You don’t want to get to the point where it’s like, how do you ever get into that rhythm?”

Plummer, a second-year freshman making his second career start, got into a decent rhythm early against NAU. He threw a 49-yard touchdown pass to Boobie Curry, and Arizona held a 13-0 lead in the second quarter.

But Plummer failed to capitalize on opportunities to expand the lead. Then he threw the pick-six.

McCloud, who started 17 games at South Florida before transferring to Arizona this summer, played with poise and was able to move the offense. He had to play catchup after not getting to campus until June, but his experience might be appealing heading into a difficult environment.

“You have to re-evaluate and say, ‘OK, will Jordan give us a better chance?’ I don’t know that. We’ll see what Jordan looks like out there,” Fisch said. “Jordan has played more. He’s started more games than those guys.”

Fisch said the staff would “continue to evaluate” Cruz as well. Cruz, a third-year freshman who transferred from Washington State, spent most of the NAU game at Fisch’s side.

“I told this to both the young guys, to Cruz and to Plummer, there’s a lot of times that guys benefit the most from watching, from being on the sideline and actually seeing (the game unfold),” Fisch said. “It was amazing how quickly Cruz could say what Will should have done while it was going on. You can kind of look out there and say, ‘Oh, hit the corner.’ Or, ‘Get it out there quickly to the swing.’ Whatever it might be.

The 2-point attempt resulted in an incomplete pass. McCloud was hit as he threw by NAU defensive end Carson Taylor, who came in unblocked off the edge. McCloud couldn’t get anything on the ball, and the pass short-hopped BJ Casteel in the end zone.

Fisch explained that the play was supposed to be a screen pass to receiver Stanley Berryhill III. McCloud decided to change the play but didn’t communicate adequately with tight end Alex Lines, who might have blocked Taylor had he gotten the signal.

“That wasn’t Alex’s fault,” Fisch said. “The quarterback checked to a pass without telling the tight end. Alex did everything right.

“Jordan will take the responsibility for that one.”

With a 13-0 lead and just over 10 minutes to play in the first half, Arizona faced fourth-and-2 at the NAU 49-yard line. Fisch elected to punt.

It was a departure from the aggression he showed during the opener. Fisch went for it on fourth down three times against BYU — twice from inside Arizona’s 31-yard line. It turns out Fisch was thinking back to that game when he decided to punt.

“I was counting on a punt to back them up, kind of like what we did against BYU,” Fisch said. “And with the way our defense was playing, I thought either we were going to create a turnover ... or we were going to get the ball back on the plus-35 with a new set of downs.”

A punt downed at the 1-yard line sparked a third-quarter rally against the Cougars. The UA defense produced a safety, and the offense followed with a touchdown.

This time, Kyle Ostendorp’s punt sailed into the end zone. The score remained 13-0 until Plummer’s pick-six.

Berryhill ranks second in the Pac-12 and fourth nationally with 28 receptions. He leads the conference with 133.3 all-purpose yards per game.

Although Arizona submitted both plays to the Pac-12, it appears there’s no path for defensive end Mo Diallo and safety Jaxen Turner to be able to play in the first half against Oregon. Both were disqualified after being flagged for targeting in the second half vs. NAU. Targeting suspensions are only subject to review in games in which instant replay is unavailable.

Fisch changed the practice schedule after the loss to NAU. The team gathered Sunday and had the day off Monday. “I thought the team was in a great spot,” Fisch said. “Disappointed? Yes. Devastated? I don’t think I would use that word. I believe that they’re going to respond really well to what’s coming our way.”

The Cats' setback against the Lumberjacks revisited: QB issues, behind the blocking problems, a bright spot and more.

Interactive report card: Check out Cats’ grades vs. NAU, then enter yours

The grades are in for the Arizona Wildcats’ 21-19 loss to NAU on Saturday. After checking out our grades and comments, try our interactive fea…

Notes, quotes and stats from the Arizona Wildcats’ 21-19 loss to NAU

Pertinent factoids, words and numbers from the Cats' setback against the Lumberjacks.

'It's embarrassing': Arizona experiences a new low as loss to NAU extends skid to 15 games

The Cats lose to the Lumberjacks for the first time since 1932; the UA opens Pac-12 play next week at No. 4 Oregon.

Arizona will need to keep piling up the Ws in the loaded NFC West, which is a combined 7-1 so far.

What in the world is wrong with Utah?

Hear what the Arizona Wildcats had to say heading into the Pac-12 opener against the Oregon Ducks.

The Arizona Wildcats are one step closer to having players in the Pro Football Hall of Fame.

Burrola had made the UA two-deep after being suspended for the 2020 season.

Cats Stats: Why Arizona’s rushing attack — once the best in the Pac-12 — has run aground

The Wildcats have gone from first to worst in rushing, a product of ineffectiveness and impatience. 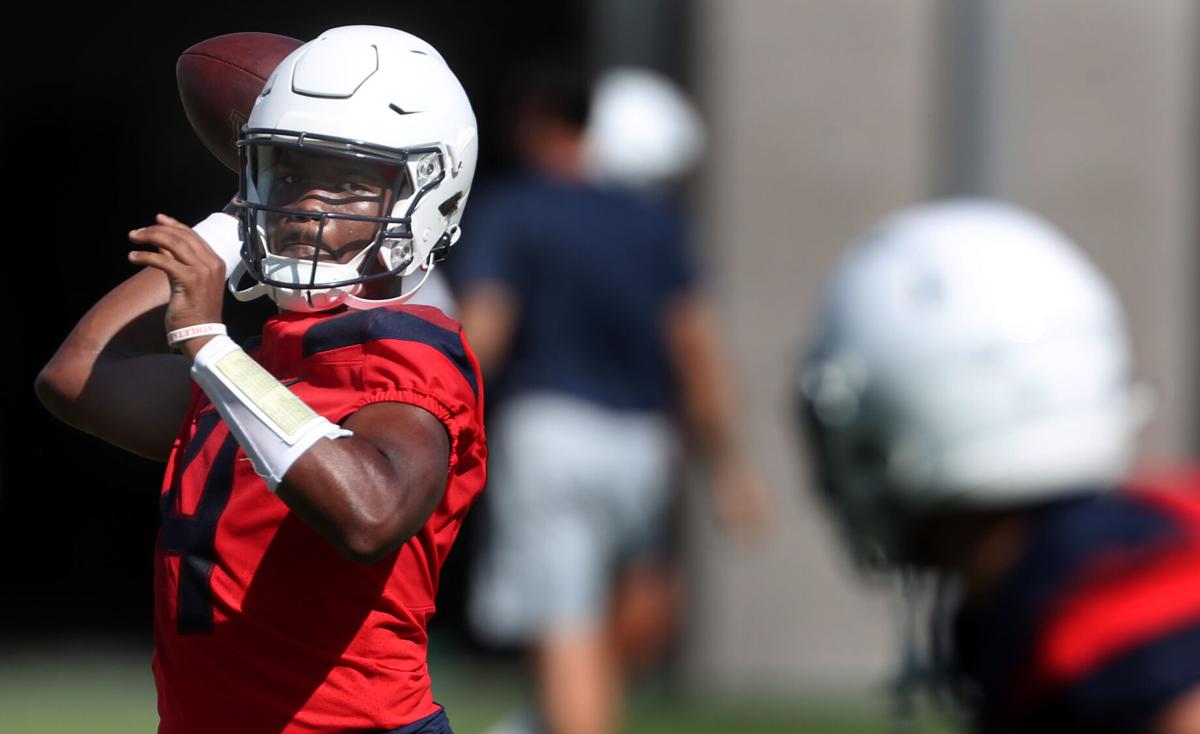 Quarterback Jordan McCloud will get a chance this week to practice to show if he deserves to start Saturday at Oregon. “We’ll see what Jordan looks like out there,” coach Jedd Fisch said. “Jordan has played more. He’s started more games than those guys.” 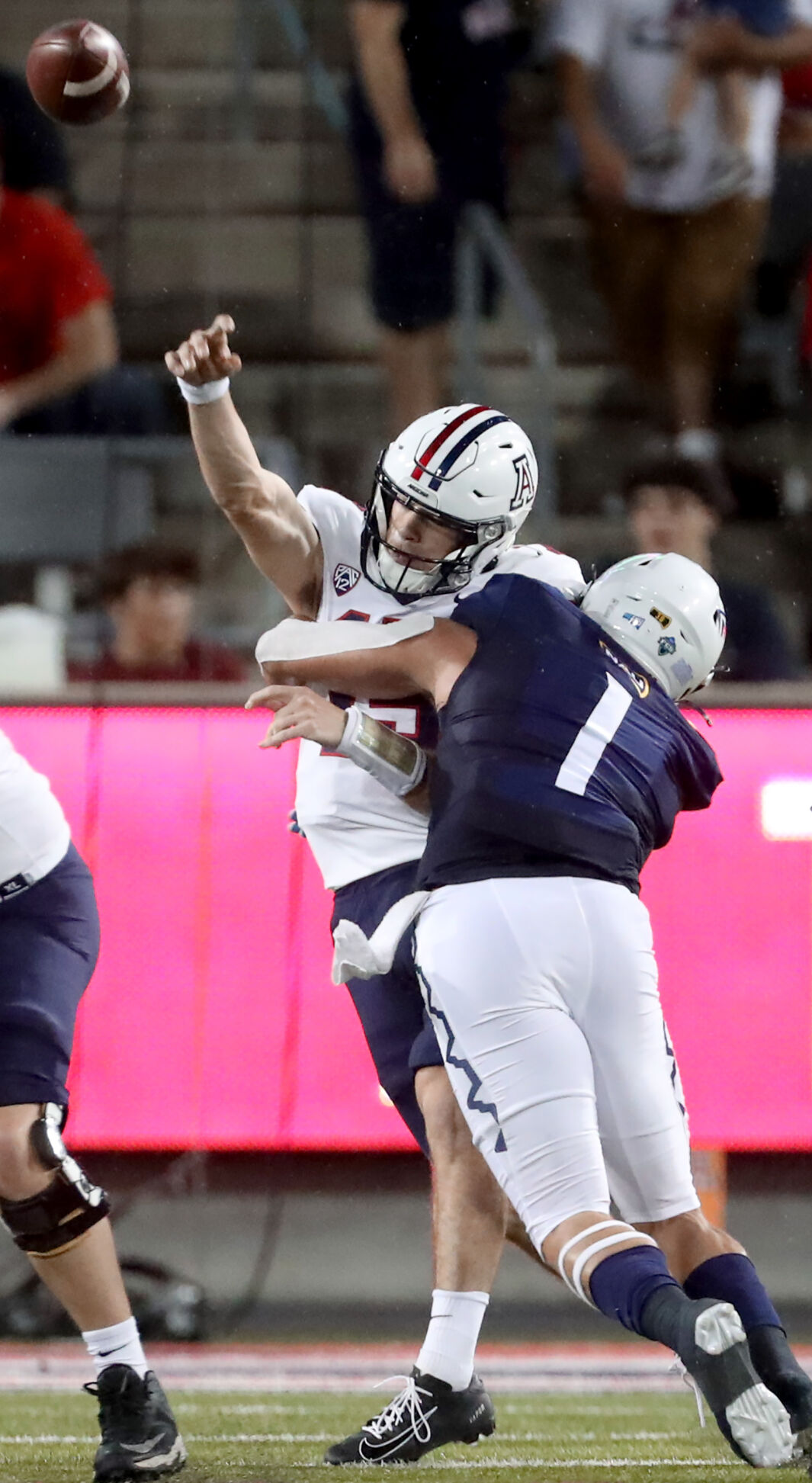 Arizona quarterback Will Plummer gets off the pass just as NAU defensive lineman Carson Taylor slams into him during the first quarter of the Lumberjacks' win Saturday night.