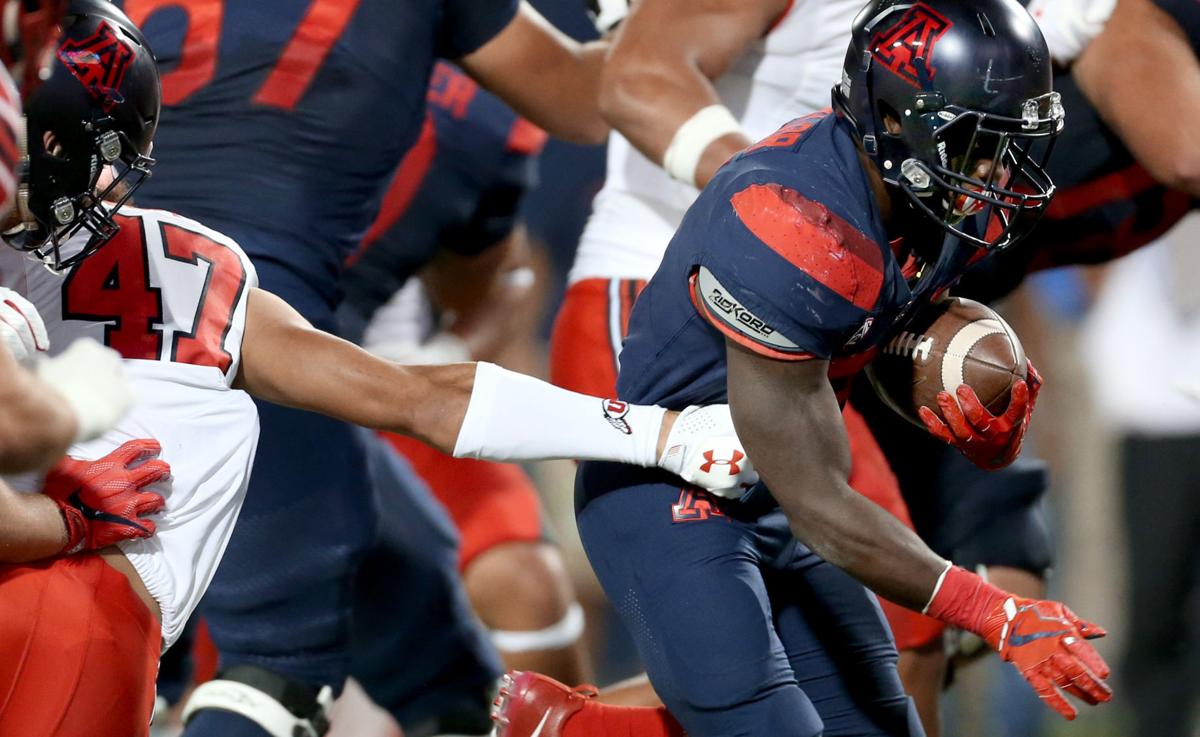 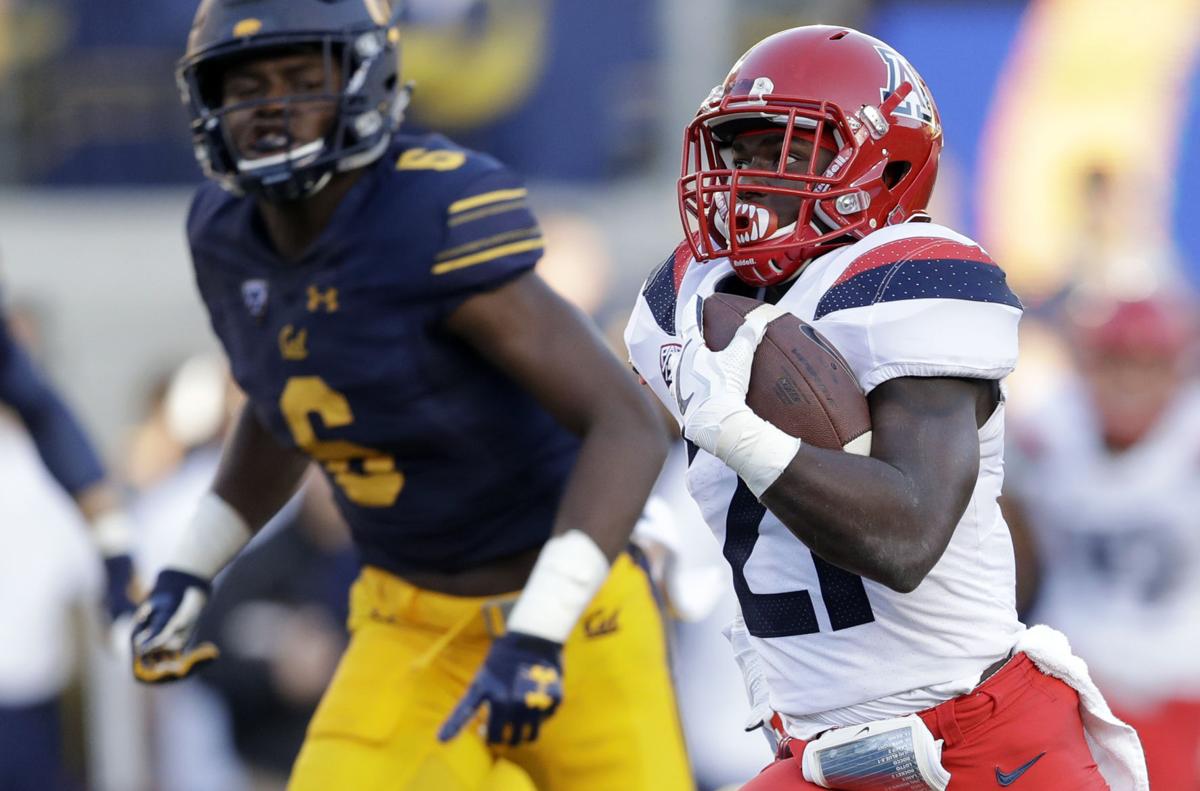 “He’s been close,” said UA coach Rich Rodriguez of running back J.J. Taylor having a breakout game. “He’s one of our most explosive players.”

Four Arizona Wildcats have rushed for 100-plus yards in a game this season. Two of them are quarterbacks. None is J.J. Taylor.

The running back with the “SportsCenter Top 10” moves has been steady this season. He hasn’t been spectacular, at least not on a regular basis. Not like 2016, certainly.

Way before Khalil Tate became a national sensation, Taylor played seven dazzling quarters of football. He rushed for 265 yards, averaging 7.2 yards per carry, against Hawaii and Washington last year. At the end of the third quarter against the Huskies, Taylor suffered a season-ending broken ankle.

He’s healthy now and playing quality football. Taylor ranks second on the team in rushing with 366 yards. He leads Arizona with 78 carries, proving he can handle a workload after last year’s injury.

Taylor just hasn’t had that one breakout game … yet.

“It’s not like he hasn’t played well,” said UA coach Rich Rodriguez, whose team hosts No. 15 Washington State on Saturday. “He’s been close. He’s one of our most explosive players.”

Taylor has 108 yards on 20 carries the past two weeks. Those numbers easily could have been greater if not for some unusual circumstances.

Against UCLA, Taylor appeared to rip off a 72-yard touchdown run in the first quarter. But a replay review determined that Taylor’s shin touched the turf at Arizona Stadium after he rolled over the Bruins’ Matt Dickerson. The 72-yard TD became a 1-yard rush.

Against Cal, Taylor carried four times for 44 yards in the first quarter. His second attempt went for a 30-yard touchdown.

Rodriguez had a hunch that Taylor’s breakout would come in Berkeley.

“He busts the one run, and I’m like, ‘OK, this is going to be his night,’ ” Rodriguez said Tuesday. “Then the next thing you know, he’s out of the game.”

On the next-to-last play of the opening period, Taylor got ejected for a targeting foul. As Tate scrambled to his left, Taylor blocked pursuing Cal defender Cameron Goode. No penalty was called on the field. After a lengthy booth review, it was determined that Taylor made enough contact with Goode in the head/neck area to warrant a disqualification.

According to Taylor, a “dude tried to come and make a tackle. I blocked him. That was it.” Asked if he thought he came in too high, Taylor said: “I’m too short to hit somebody too high.” Taylor is 5-foot-6. Goode is listed at 6-4.

Taylor didn’t initially leave the field. Referee Mike Mothershed announced the penalty as a personal foul, so it was unclear whether Taylor was ejected. Soon after, an official escorted him to the sideline.

Taylor had to spend the rest of the game in the locker-room area. He watched it on TV in an interview room with freshman safety Troy Young, who was booted for targeting earlier in the first quarter. Defensive tackle Parker Zellers, who had to sit out the first half because of a targeting penalty from the previous week, joined them until halftime. Tailback Nick Wilson, who injured his ankle in the first half, also attended the party, which for the players felt more like a wake.

“It was just a rough time,” Taylor said.

“It’s not even a focus of mine,” Taylor said. “I’m more focused on developing as a player and handling my assignments the way they’re supposed to be handled.

“Stats and carries don’t mean anything to me, as long as we win games. That’s all I’m here for.”

Arizona ended up winning its third in a row, 45-44 in double overtime. Zach Green took over for Wilson and Taylor and notched career highs in carries (20) and yards (130).

Taylor and Green will share backfield duties against Washington State if Wilson is unable to play. The Cougars rank third in the Pac-12 and 22nd in the nation in run defense, allowing 120.1 yards per game.

The accolades keep rolling in for Tate.

Tate was named to Pro Football Focus’ Pac-12 Team of the Week for the third week in a row. That coincides with Tate earning Pac-12 Offensive Player of the Week honors three straight weeks.

“It’s a credit to him,” quarterbacks coach Rod Smith said. “But the biggest credit is to the guys blocking up front and the guys on the perimeter and the guys running the ball. It’s a team effort. Whenever one guy gets accolades, it’s not just one guy. It’s the whole unit working together.”

Tate was sick Monday, when he turned 19 years old. He came to the facility anyway.

Arizona Wildcats are surging, but defensive breakdowns on third down could derail them

After some promising signs earlier in the season, the Cats again rank near the bottom nationally in third-down defense.

Colin Schooler’s pass breakup on a two-point conversion attempt preserves a 45-44 UA victory and puts the Cats one win away from bowl eligibility.

Arizona Wildcats head to Cal ready to take on a new challenge: Dealing with success

No one in the Pac-12 runs the ball better than Arizona, which established its identity against its arch rival.

Hansen's video notebook: Beer at McKale Center is an easy sale, but what about the future implications?

Greg Hansen and Star sports editor Ryan Finley look at how beer at McKale Center affects the fan experience, and what it could mean for possib…

The Arizona Wildcats’ defense took some hits last week, but it appears three key defenders will have a good chance of playing against Washingt…

The Arizona Wildcats continue to pick up verbal commitments at a brisk pace.

What to watch for when the Arizona Wildcats host Luke Falk, No. 15 Washington State

Three things to keep an eye on as the Cats face the Cougars to cap homecoming tonight.

“He’s been close,” said UA coach Rich Rodriguez of running back J.J. Taylor having a breakout game. “He’s one of our most explosive players.”