Every week throughout the season, we’ll take a look back at the Arizona Wildcats’ previous game after re-watching it via the TV broadcast. Here are five key takeaways from the UA’s 45-18 loss at Houston on Saturday:

Coach Kevin Sumlin and quarterback Khalil Tate had different takes on the severity of Tate’s ankle injury after the game. Sumlin said Arizona had to change its entire game plan; Tate said the injury wasn’t that big a deal. Upon further review, it was clear that from the time of the injury through the third quarter, Tate was hampered to some degree. On several occasions, he could have kept plays alive with pass rushers closing in on him. Instead, he threw the ball away as quickly as he could (and was fortunate the officials didn’t nail him for intentional grounding). But then, in the fourth quarter, Tate started to look his old self. Not quite his run-through-the-defense-for-80-yards self, but something closer to it. Tate extended plays. He glided around a defender for a short touchdown run. He even tried to plow into the end zone on third-and-goal. Hopefully, for Arizona’s sake, those plays rekindled the spark in Tate that largely has been missing. It’s impossible to know how much pain he was in and what was going through his head. But the Wildcats need that fourth-quarter version of Tate to have a chance to salvage this season.

Some growing pains were expected from the offense, which is transitioning to a new scheme with a new coordinator. The defense was expected to take a leap forward in Year 3 under Marcel Yates. It hasn’t happened yet. If anything, the unit has taken a step backward. There were myriad problems in Houston. Tackling was near the top of the list. Several times, UA defenders were in position to make plays but didn’t break down properly, instead lunging fruitlessly at Houston’s slippery ball-carriers. The pass rush was virtually non-existent, whether Yates rushed three players (a strategy that has hurt more than it has helped) or five. The weight-room gains that players and coaches touted in the offseason haven’t translated to the field, as the defensive front generally has gotten pushed around. The secondary – missing key pieces Jace Whittaker and Scottie Young Jr., plus Demetrius Flannigan-Fowles, who exited in the third quarter – made some plays but also benefited from the Cougars dropping five passes. The only returning starters who have sustained their level of play from last season are linebacker Colin Schooler and cornerback Lorenzo Burns. That’s not enough.

All that being said, the defense had its moments. The unit forced six punts, including three straight three-and-outs in the second half. It also registered a safety, via the aggressive, instinctive Schooler. What’s missing from the defense – and the entire team, really – is consistency. When Sumlin was asked about bright spots after the game, he cited the steadiness of senior receivers Shawn Poindexter and Tony Ellison. You know what you’re going to get from them. The same can’t be said for most of the rest of the team, which remains relatively young; 67.6 percent of the opening-night roster consisted of underclassmen. Here’s an example of the inconsistency: On Arizona’s first possession of the fourth quarter, right guard Bryson Cain made effective blocks on consecutive runs by Darrius Smith that gained 12 and 11 yards. On the next play, Cain missed his man, Isaiah Chambers, who tackled Smith for a 4-yard loss. Saturday marked Cain’s second career start. He redshirted as a freshman and missed last season because of injury. He moved from tackle to guard this past spring. Almost every experience is a new one for him and many of his teammates.

Every week we provide some notes on individual players, so here goes … Tate looked most comfortable operating out of the pistol. That formation makes play-action fakes more effective. That, in turn, opens up the middle of the field. … In a brief relief appearance, backup QB Rhett Rodriguez showed he can operate the offense in a pinch. … It’s a shame RB Gary Brightwell bobbled that fourth-and-1 pitch, resulting in a 9-yard loss; he looked sharp otherwise. … Smith, making his collegiate debut, looked like a veteran. He displayed patience, vision and cutback ability. … TE Bryce Wolma fared much better as a blocker against Houston than against BYU. … Arizona’s offensive linemen continued to struggled to get to the second level, limiting the effectiveness of the ground game. … Walk-on defensive tackle Abraham Maiava, in his first extended action, got overpowered at times but played with great hustle and determination. … Freshman “Spur” safety Dayven Coleman looked much more comfortable and played more aggressively in his second game before exiting because of what appeared to be cramps. … After struggling in Week 1, Flannigan-Fowles played with newfound confidence before having to leave the game.

There wasn’t much to feel good about immediately after the game. Arizona was down 38-0 early in the third quarter against a Group of Five school. Three defensive starters didn’t play, and two more got hurt. But the way the team kept fighting – and the way Tate looked in the fourth quarter – offers a glimmer of hope. No matter who’s available to play, Arizona should be able to defeat Southern Utah at home this week. From that point forward, it’ll come down to health, Tate’s form and whether the young players continue to trend upward. The former is critical; the Wildcats clearly missed Whittaker and Young against Houston, and they’ll be in trouble if defensive tackles PJ Johnson (ankle; DNP) and Dereck Boles (knee; carted off in second quarter) are out for any substantial period. Arizona doesn’t look like a contender for the Pac-12 South championship, which seemed within reach before the season began. But a bowl berth is still viable. The conference opener at Oregon State is winnable. That would make the Wildcats 2-2 and, if nothing else, give them the confidence boost they desperately need.

Interactive report card: Check out Cats' grades vs. Houston, then submit your own

The grades are in for the Arizona Wildcats’ 45-18 loss to Houston on Saturday at TDECU Stadium. After checking out our grades and comments, tr…

Notes, quotes and stats from the Arizona Wildcats’ 45-18 loss to Houston

Observations from warmups before the Arizona Wildcats’ game at Houston on Saturday morning at TDECU Stadium (9 a.m., ABC/ESPN2):

9/11 memorial events in and around Tucson

At the World Trade Center, 2,763 died after the two planes slammed into the twin towers. That figure includes 343 firefighters and paramedics,…

The UA saw a 14-spot increase from last year's rankings.

Watch what Kevin Sumlin had to say about the Arizona Wildcats heading into the third week of the season.

Yes, you may put magazines in curbside recycling

PHOENIX  — A former youth care worker has been convicted of sexually abusing seven teenage boys at a Phoenix-area shelter for immigrant children.

The Wildcast, Episode 126: What Kevin Sumlin has learned about Arizona in the first two games

Justin Spears and Michael Lev discuss the state of Arizona after the Wildcats start the Kevin Sumlin era 0-2, and how the return of key starte…

Watch: 'It's like a whole new O-line' with Layth Friekh back in the fold

Arizona Stadium plays host to two winless teams on Saturday. The Wildcats hope to shake that trend with Southern Utah in town. But first, four…

The senior’s two-week wait is over, and he’s eager to help the struggling line find its form.

The Star's panel sets the Pac-12 power rankings heading into Week 3 of the college football season.

What to watch for when the Arizona Wildcats host Southern Utah

Three things to keep an eye on when the Cats face the Thunderbirds at Arizona Stadium. 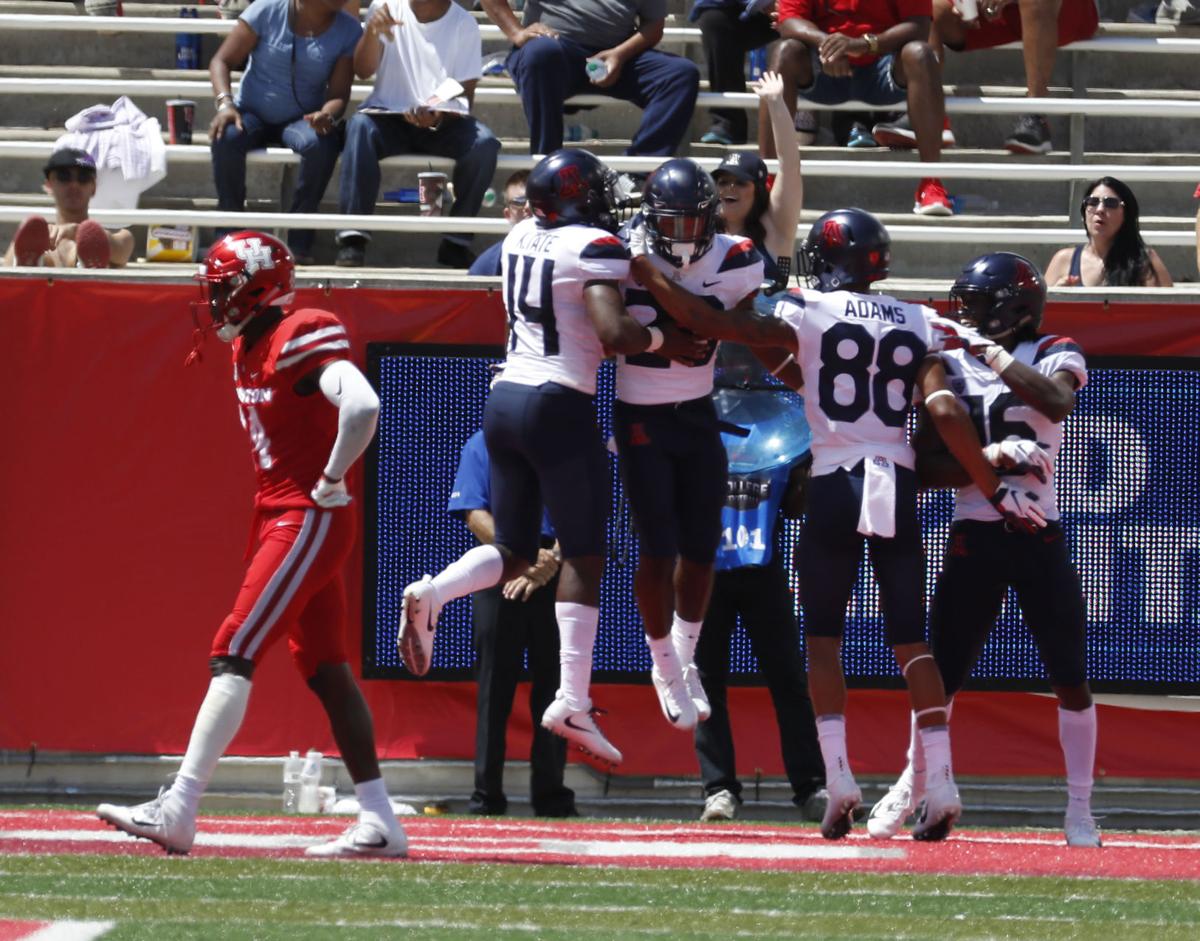 By the fourth quarter Saturday, Arizona QB Khalil Tate felt well enough to celebrate a touchdown with his teammates. 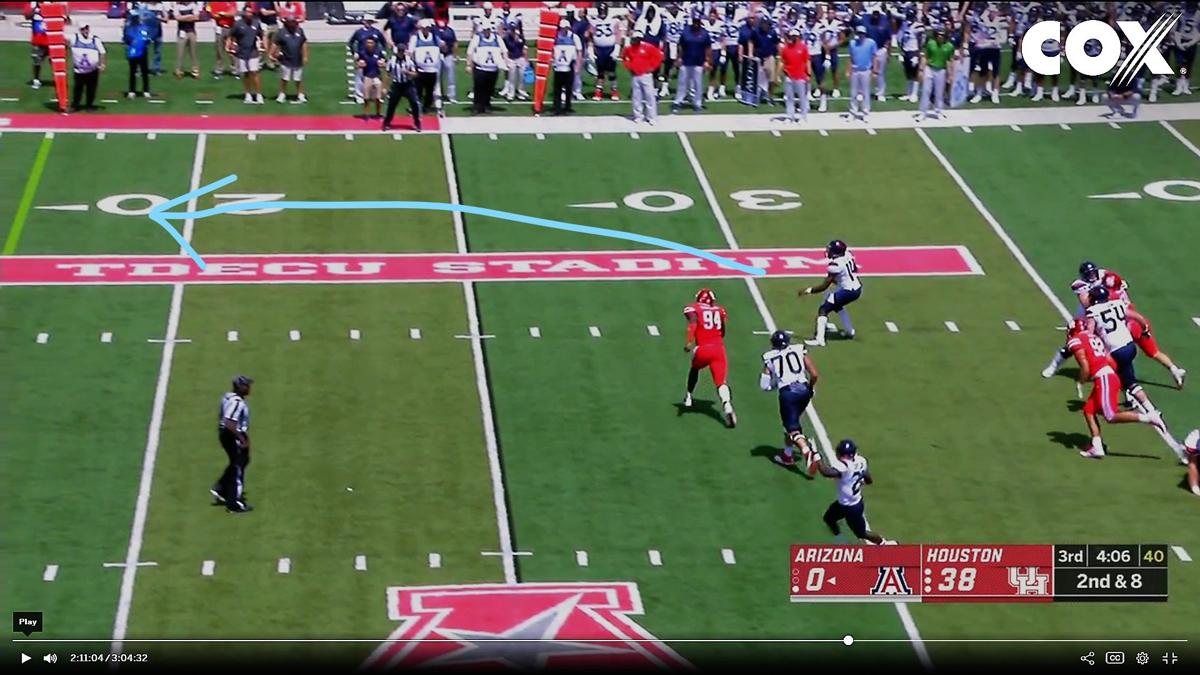 Khalil Tate didn't feel comfortable enough in his ankle to run to daylight on this third-quarter play, instead throwing the ball out of the end zone. 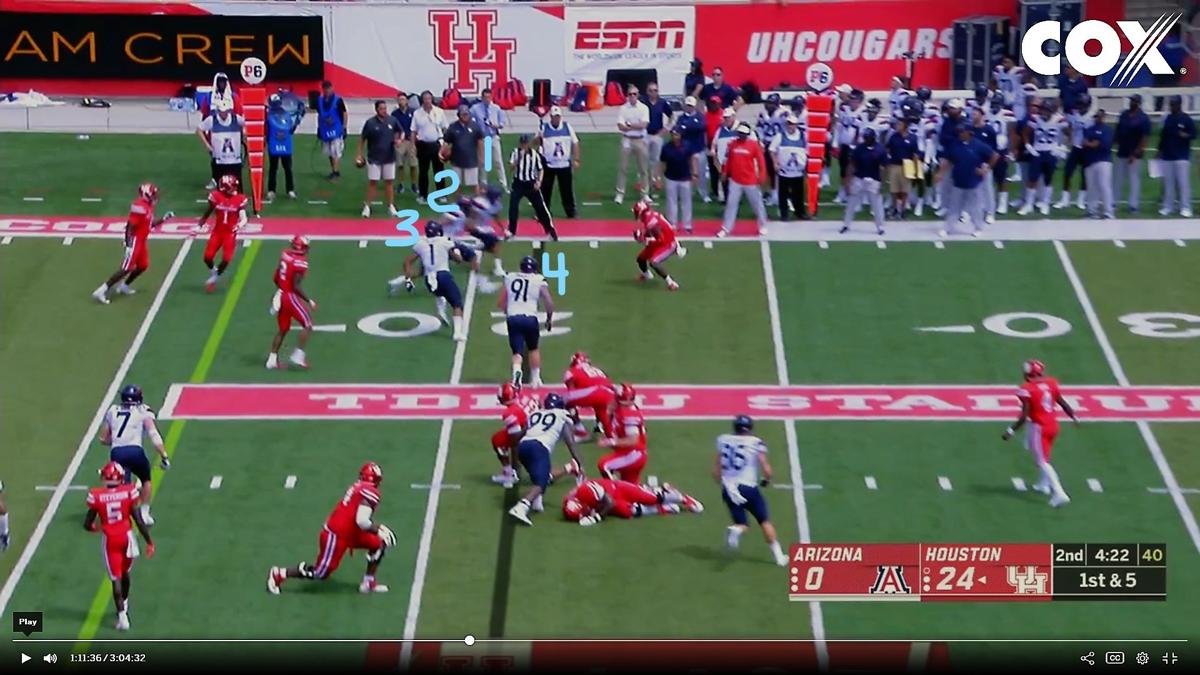 Houston's Terry Mark gained 7 yards on this second-quarter pass despite being surrounded by Wildcats. 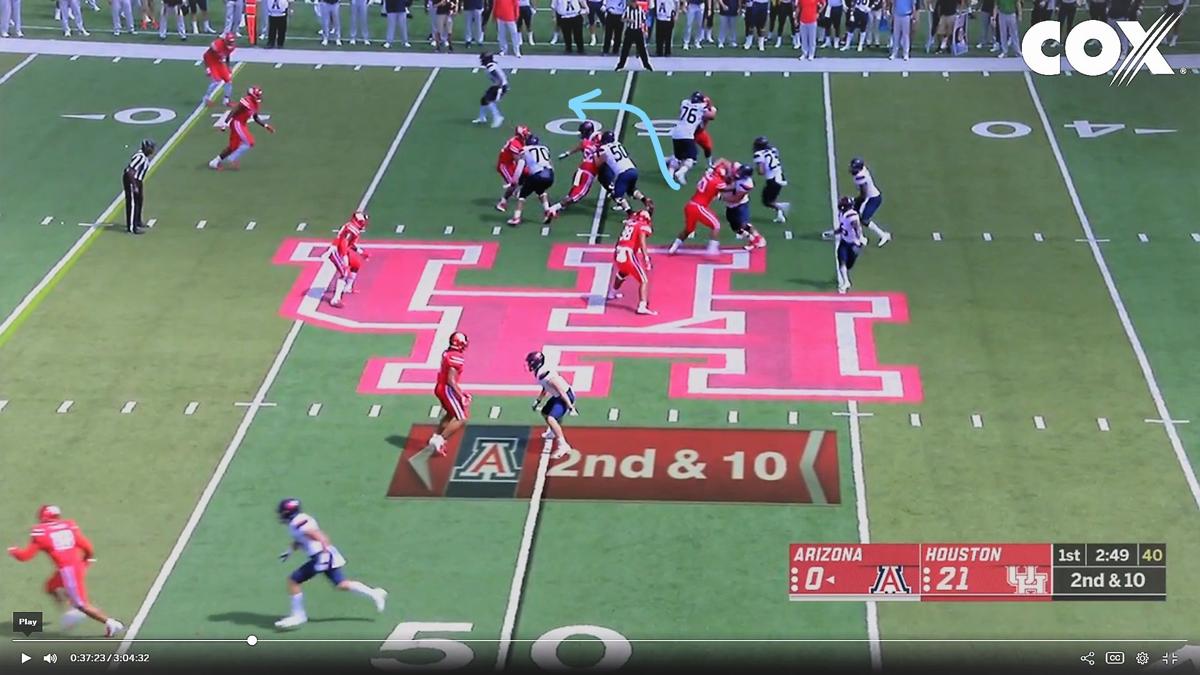 The offensive line - which got hats on hats on this play - personifies Arizona's inconsistency. 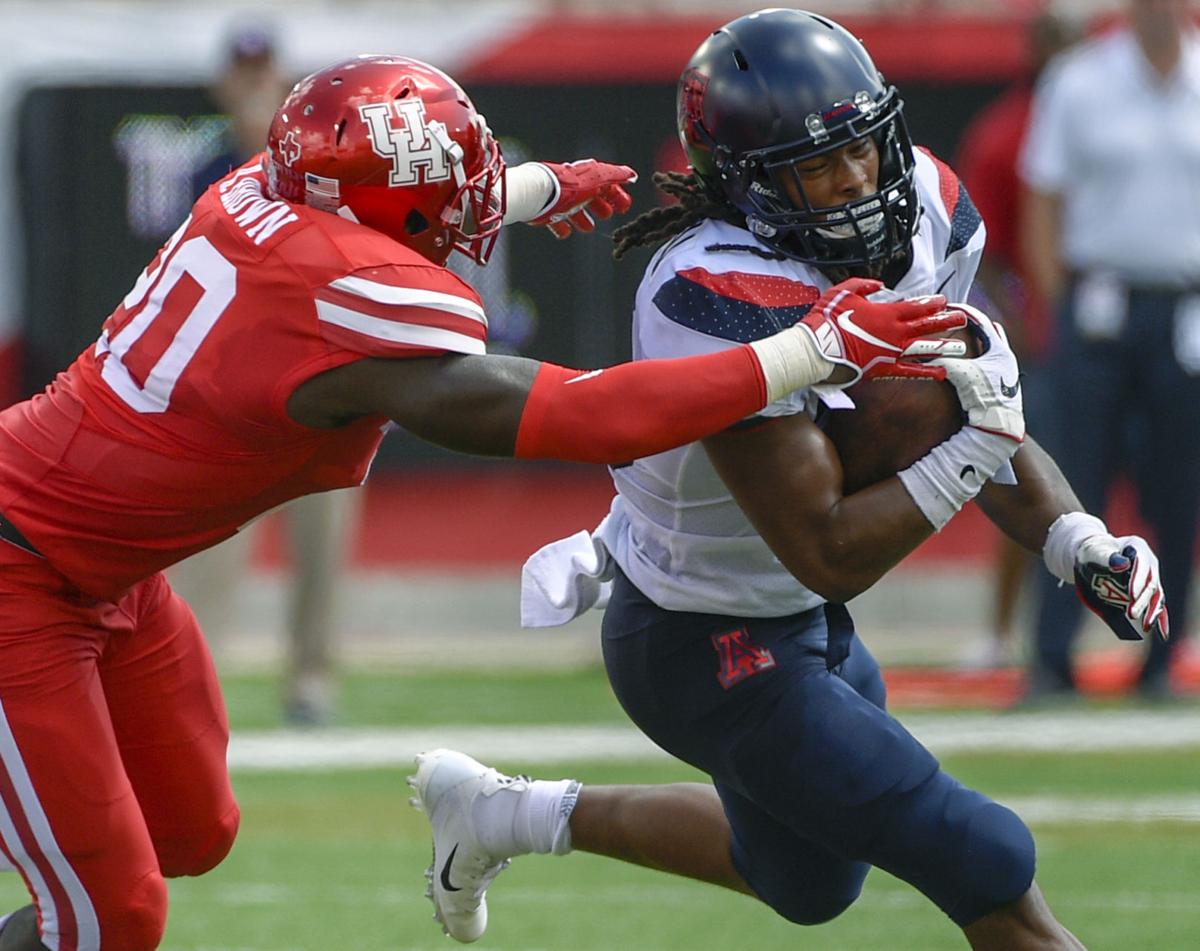 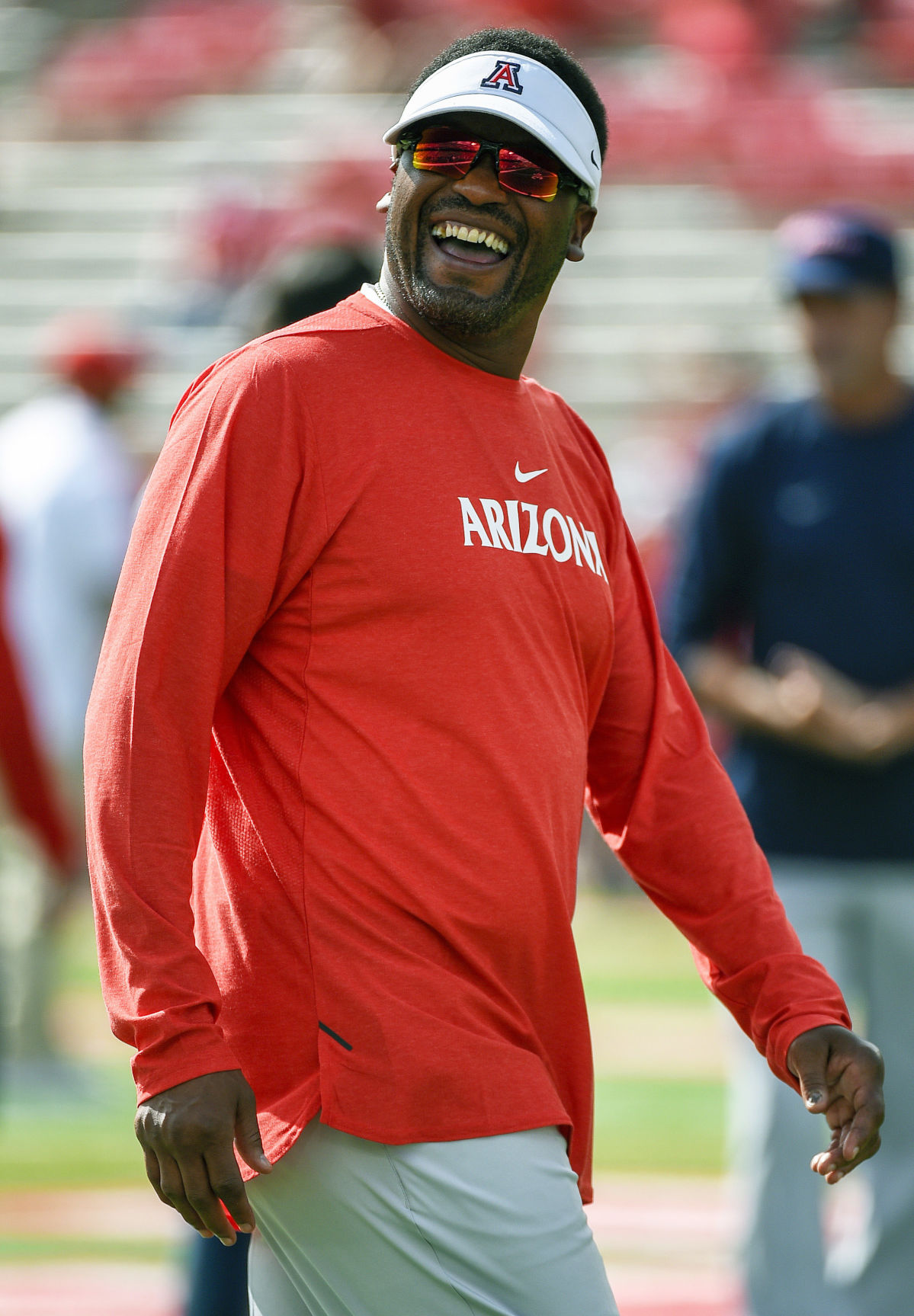 Arizona coach Kevin Sumlin didn't have many reasons to smile in his return to Houston, but his team's no-quit attitude is something to build on.