Even in the darkest of times, the Arizona Wildcats never had lost nine games in a row.

The current Cats made history Saturday night. Arizona suffered its ninth consecutive defeat, falling 44-27 to Washington at Husky Stadium in Seattle. The final score wasn’t entirely representative of how the game transpired.

"They handled us at the line of scrimmage offensively and defensively, and that really limited us," said Kevin Sumlin, who fell to 9-17 as UA coach. "They dominate the football game up front on both sides, which led to the results."

It was the Huskies who began the skid with a 51-27 victory in Tucson on Oct. 12 of last year. The Wildcats led that game at halftime 17-13. They rarely have come close to winning since.

The UA and its fans came out of the season opener feeling encouraged. Arizona went toe-to-toe with No. 20 USC, falling 34-30 on a touchdown with 25 seconds to play.

The Wildcats took a step backward against the Huskies. Washington (2-0) dominated through three quarters, outscoring the Cats 37-0 and outgaining them 392-66. The Huskies had a 22-5 edge in first downs at that point.

"Coming off of last week, I don’t know if surprise is the word. It’s disappointing," Sumlin said. "We gotta coach better. We gotta handle situations on the road."

Arizona (0-2) is scheduled to visit UCLA next Saturday. The Wildcats beat the Bruins last season. UCLA is 1-2 but gave No. 11 Oregon everything it could handle in a 38-35 loss earlier in the day.

Down 24-0 at halftime, Arizona got the ball first to open the third quarter. The Wildcats went three-and-out for the fourth time. Quarterback Grant Gunnell, who struggled for most of the night, suffered a pair of sacks. The Huskies finished with five sacks.

"I thought our protection would be better," Sumlin said. "They teed off and got to him. Even when he got the ball off, (they) hit him and flushed him. ... And then to be able to take the pressure off and run it, obviously we weren't able to do that either."

Washington scored touchdowns on each of its first two possessions in the third quarter, expanding its lead to 37-0. The second came on a pass from Dylan Morris to tight end Cade Otton, who had his way with the middle of the UA defense. Otton finished with seven catches for 100 yards – both career bests.

Morris, a redshirt freshman, finished 15 of 25 for 230 yards, averaging a robust 9.2 yards per attempt. He threw two touchdown passes and was not intercepted. Arizona has yet to produce a takeaway this season.

"We know we're good enough to play with anybody," senior linebacker Jalen Harris said. "So it's just about putting it together and doing what we need to do to get the job done and come out with a win."

The UA averted a shutout when Gunnell connected with Stanley Berryhill III for a 30-yard touchdown with 12:54 remaining. Lucas Havrisik then missed the extra point, clanging it off the left upright. It was that kind of night.

Gunnell finished 27 of 39 for 259 yards and three touchdowns. He had just 50 yards through the third quarter.

"I just loosened up," Gunnell said. "I was uptight, looking at the D-line through the first three quarters. That kind of screwed us as an offense as a whole. That's on me. That's probably what changed the most."

After much discussion during the week about Washington’s commitment to the run game, the Huskies came out throwing. Their first play was a bootleg pass. Their seventh was a 65-yard touchdown pass from Morris to Puka Nacua. In between, Washington converted a fake punt for a first down on fourth-and-1.

"We expected it," Harris said of Washington throwing the ball early. "We thought they would change it up a little bit. They wanted to run first. We knew that they’d probably be thinking we were preparing for that. Then they showed play-action. We've just got to do our job."

The UA defense kept UW out of the end zone on its next possession, thanks to stops by Lorenzo Burns and Harris inside the 5-yard line. Peyton Henry’s 20-yard field goal made it 10-0.

After an opening three-and-out, the Wildcats turned the ball over on their second possession. Edefuan Ulofoshio beat Donovan Laie to the inside and stripped Gunnell. Josiah Bronson recovered the ball at the Arizona 9-yard line. Two plays later, the Huskies’ lead grew to 17-0 on Sean McGrew’s 1-yard touchdown run.

Arizona finally got a first down on its next possession, but the drive ended with another sack. Washington responded with another touchdown to make it 24-0. This time it was Richard Newton powering in from the 2.

Gunnell said he never lost more than two games in a season in high school. Now his team is 0-2 and hasn't won in over a year.

Asked Arizona QB Grant Gunnell if he's ever experienced a losing streak like this. Gunnell said he's never lost more than 2 games in a row until he got to college.

"We're doing everything we can. We're pushing. ... I'm telling you, we're gonna win. It's falling into place. It's gonna happen. And when it does. it's going to click."

Photos: Arizona Wildcats lose to Washington in first road game of the season

Three things to keep an eye on when the Cats face the Huskies in Seattle.

The Huskies showed an unwavering commitment to running the ball in their opener; do the Wildcats have what it takes to stop them?

The Star columnist checks in with the big questions — and answers — as Arizona prepares for Saturday night's game at Washington.

A look at five storylines surrounding the Wildcats-Huskies matchup in Seattle.

Greg Hansen: Saturday's game was a no contest, even though the Wildcats and Huskies played

Wildcats lacked — pick one — the energy, toughness, discipline, effort or execution to be competitive in a 44-27 loss in Seattle.

Arizona has now lost a program-record nine straight games, which dates back to last October, following a 44-27 loss to the Washington Huskies.…

Notes, quotes and stats from the Arizona Wildcats’ 44-27 loss at Washington

Pertinent factoids, words and numbers from the Cats' setback against the Huskies.

For the second week in a row, the Arizona Wildcats will kick off at 6 p.m. And for the first time in probably ever, Arizona State will play  on a Sunday. 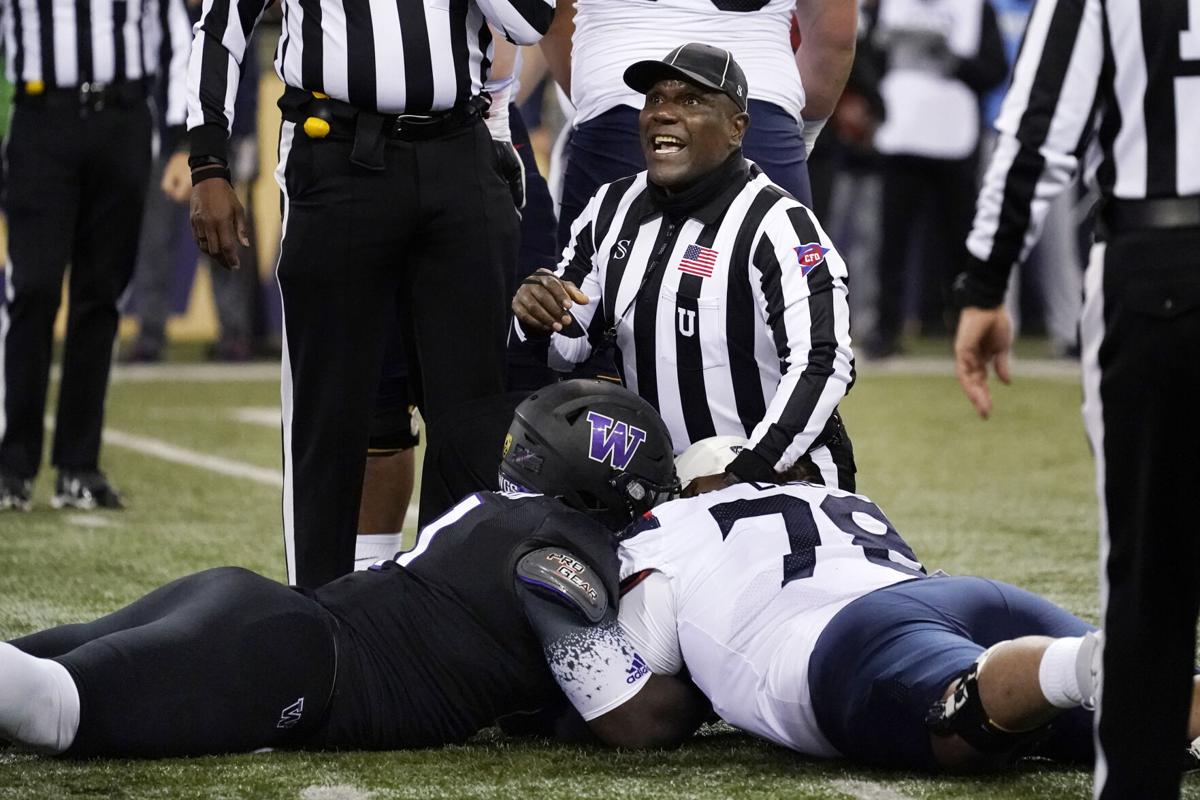 Umpire Gregory Adams looks up to make a call on a fumble recovery as Washington's Josiah Bronson, left, and Donovan Laie continue to fight for possession during the first half of an NCAA college football game Saturday, Nov. 21, 2020, in Seattle. Washington won the call. (AP Photo/Elaine Thompson) 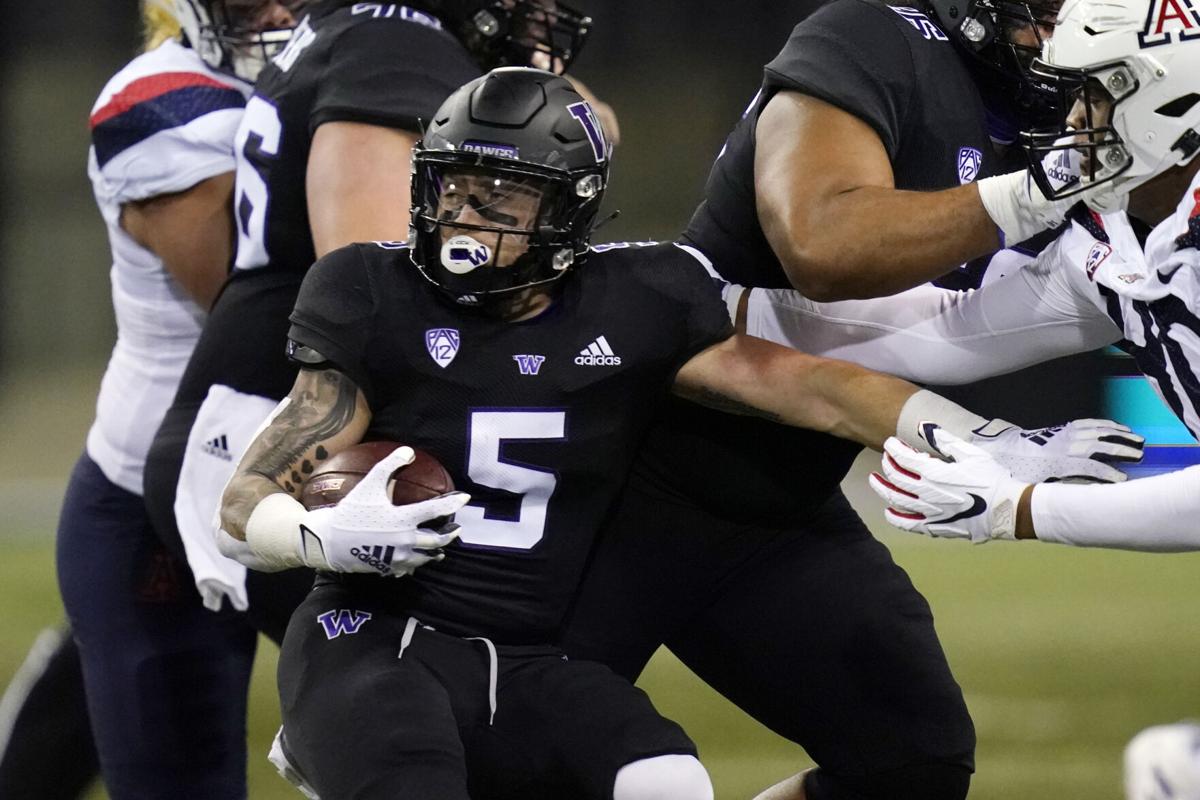 Washington's Sean McGrew carries during the first half of the team's NCAA college football game against Arizona on Saturday, Nov. 21, 2020, in Seattle. (AP Photo/Elaine Thompson) 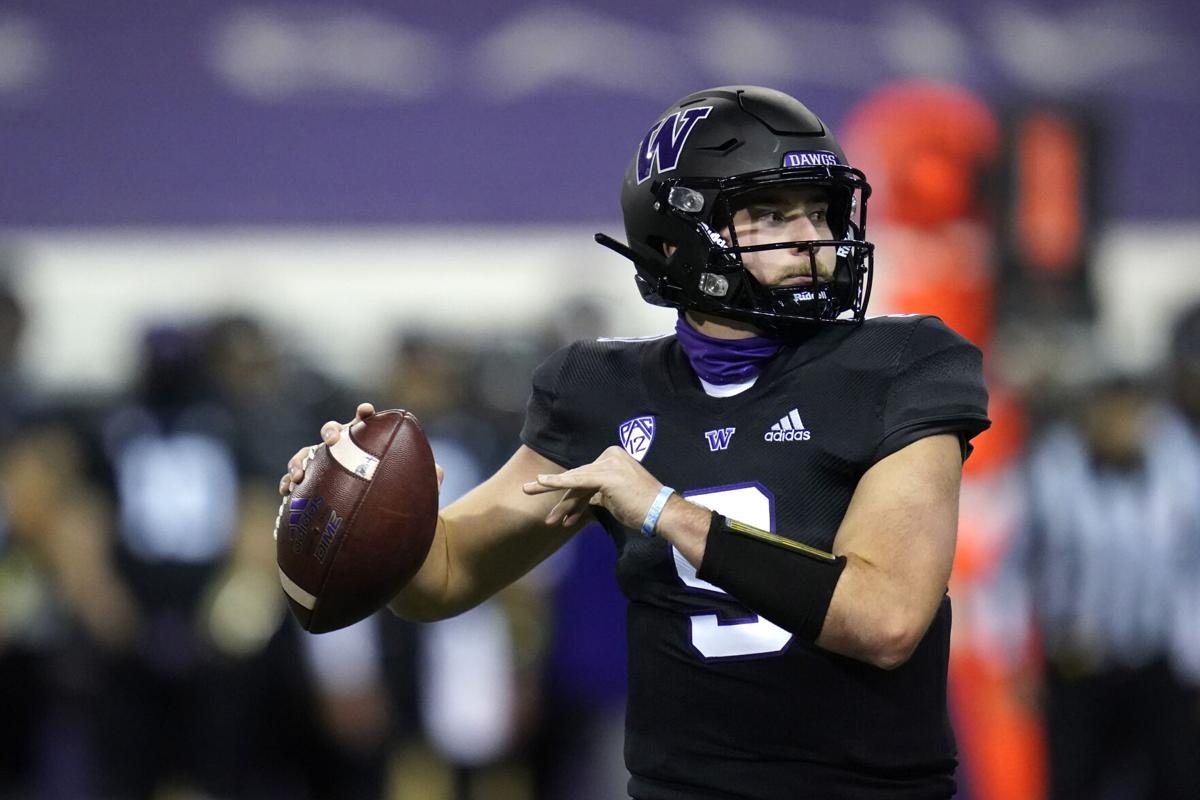 Washington quarterback Dylan Morris drops back to pass against Arizona during the first half of an NCAA college football game Saturday, Nov. 21, 2020, in Seattle. (AP Photo/Elaine Thompson)