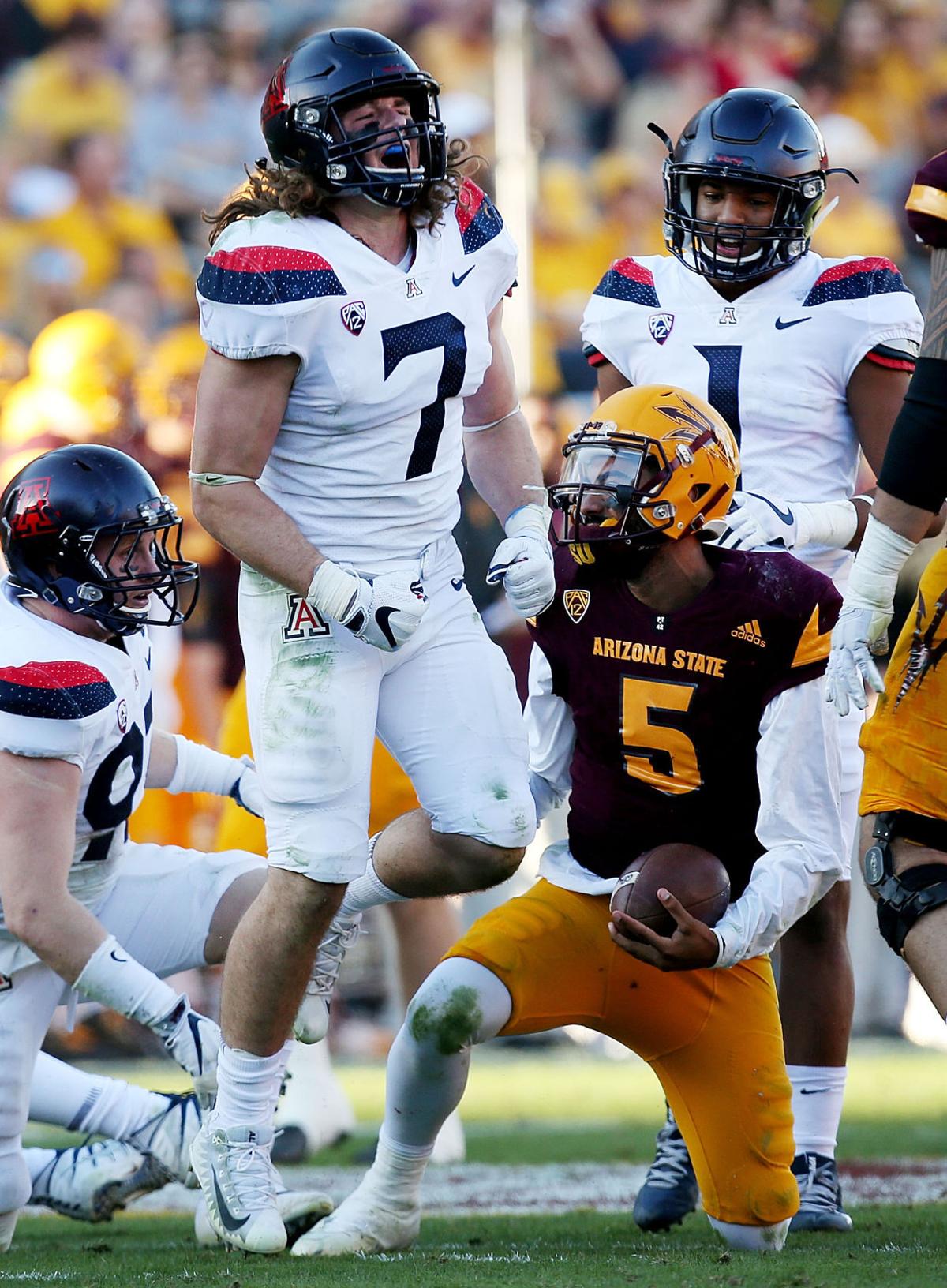 Colin Schooler (7), who had 13.5 tackles for losses, was named the Pac-12’s Defensive Freshman of the Year. 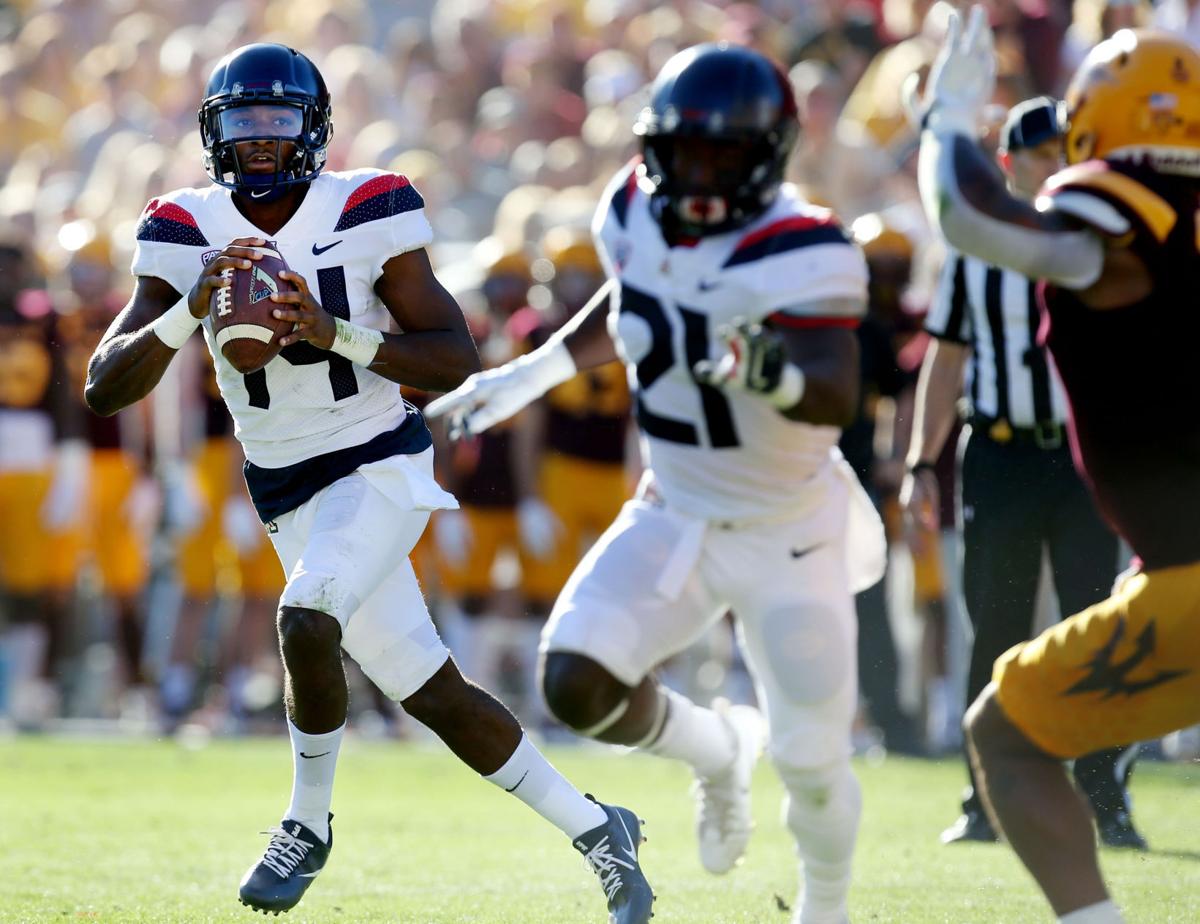 Arizona’s Khalil Tate is one of 11 finalists for the Manning Award, given to the nation’s top QB, but didn’t appear on an All-Pac-12 team.

It’s difficult in the aftermath of a frustrating defeat to put all that preceded it in the proper perspective.

The Arizona Wildcats had just lost to rival Arizona State in a game they easily could have won. Most weren’t in a mood to talk about it.

Three players were willing and able to look past a disappointing Saturday and reflect on an encouraging season. As much as the ending hurt, they realized that there were more good moments than bad — that expectations had been surpassed and that the future looks promising.

“I thought we shocked a lot of people,” said cornerback Lorenzo Burns, one of five freshmen or redshirt freshmen to start for the UA defense. “We were picked dead last in the whole Pac. I thought we did a great job of coming together and proving everybody wrong. I’m not happy with the result today, but with the overall season, I’m pretty happy with it.”

But considering where Arizona came from, that record represents tangible progress. The Wildcats went 3-9 during an injury-filled 2016. They were 2-2 through September of this season before rattling off four consecutive victories.

“Comparing last year’s team — me watching the team last year and me playing this year — I feel like we grew as a team,” freshman linebacker Tony Fields II said. “In this upcoming bowl game, I feel like we can show our peak, show our edge for the next season.”

Based on the Pac-12 pecking order, Arizona’s likeliest destination appears to be the Dec. 16 Las Vegas Bowl. It’s also possible the Wildcats could land in the Dec. 29 Sun Bowl. All bowl-game matchups will become official this upcoming Sunday.

Whether Arizona will have quarterback Khalil Tate — the player most responsible for this year’s turnaround — for the finale remains to be seen. Tate hurt his left (non-throwing) shoulder in the first half against the Sun Devils and couldn’t finish the game. UA coach Rich Rodriguez did not have a timetable for Tate’s return. A later bowl date obviously would give him a better chance.

Tate’s emergence sent incumbent Brandon Dawkins to the sideline. Dawkins relieved Tate on Saturday, but couldn’t sustain the momentum from the first half. Dawkins rushed for a 50-yard touchdown but also threw an interception and suffered two sacks.

Despite a rough conclusion to what could be his final season at Arizona – Dawkins is a redshirt junior and a possible candidate to be a grad transfer — the former starting quarterback stood tall in the postgame pocket. Dawkins expressed pride in the team’s accomplishments, even if they came at the expense of his spot in the lineup.

“We never count ourselves out,” Dawkins said. “After last season, being as rough as it was, I didn’t see any of the guys hanging their heads or feeling sorry for themselves. They just got right back to work.”

The upcoming break comes at an opportune time for Arizona’s defense, which was missing two starting linemen Saturday.

It won’t hurt the freshmen to get a breather, although Fields said he wasn’t feeling any fatigue from hitting the so-called “freshman wall.”

Fields rebounded from a rough game at Oregon by recording 10 tackles, including 1.5 for losses. His partner at linebacker, fellow freshman Colin Schooler, fared even better.

Schooler finished with a team-high 13 tackles, including two for losses (one sack). It was the fourth time in the past six games that Schooler reached double figures in tackles. It was the third straight game in which he registered multiple stops for losses.

“He’s been running around like his head is on fire,” Fields said. “He’s been making plays. Me and him have been watching a lot of film. He’s a very smart guy. He’s seeing the plays, and he’s reacting. That’s all it is.”

Fields ranks ninth in the Pac-12 with 91 tackles; Schooler is tied for 11th with 88 and tied for fourth in tackles for losses (13.5). Here’s where some other Wildcats rank in the conference at the conclusion of the regular season:

Khalil Tate goes down, and the Arizona Wildcats lose their grip on the Territorial Cup

The quarterback misses most of the second half, and the UA squanders a 10-point lead in a 42-30 loss to Arizona State.

Rich Rodriguez expects 70 percent of Arizona's recruits to sign later this month. That means the Wildcats' coaches will scramble as they prepare for the Foster Farms Bowl.

Colin Schooler (7), who had 13.5 tackles for losses, was named the Pac-12’s Defensive Freshman of the Year.

Arizona’s Khalil Tate is one of 11 finalists for the Manning Award, given to the nation’s top QB, but didn’t appear on an All-Pac-12 team.