Luke was seen in a walking boot following last week’s win over North Dakota State — a game in which he delivered a 28-yard run in the fourth quarter. Luke’s status for Arizona’s Pac-12 opener at Cal on Saturday is questionable.

If Luke is unable to play, Arizona could turn to Chandler native Drake Anderson, who rushed for 385 yards and a touchdown for the UA last season after transferring from Northwestern.

“I imagine Drake Anderson having a little bit of a role. … Drake is fully healthy, so it gives us a chance to have four healthy backs, if Speedy can’t go,” Fisch said during his news conference on Thursday.

Considering Luke is last in carries (six) behind Williams (25), Coleman (24) and Wiley (21), the Wildcats could improvise and play short-handed — especially now that Coleman has proven to be a reliable running back in late-game situations. Coleman, carried the ball four times for 30 yards in Arizona’s second-to-last offensive possession against NDSU. The result: A nearly nine-minute touchdown drive that allowed Arizona to take the lead.

“Jonah had practiced really, really hard in the spring. I think all of us who watched spring football recognized his value and how he developed as a football player,” Fisch said. “Training camp, he came back and it was a lot, as usual for a true freshman, where all of a sudden it’s ball all the time. … Once he got acclimated to that, he started getting better every week and started playing more and more in games.”

Coleman, a Stockton, California native, will make his return to Northern California on Saturday.

Blocking for receivers a ‘work in progress’

A highly-touted receiver such as Arizona’s star freshman Tetairoa McMillan likely never had to block before coming to college.

The 6-foot-5-inch McMillan was Anaheim Servite’s top pass-catcher and touchdown-grabber. Now that he’s sharing the field with older receivers Jacob Cowing and Dorian Singer, McMillan’s role in Arizona’s offense is different from the high school level; he mus use his hands to block defensive backs for his receiver cohorts.

As wide receivers coach Kevin Cummings said during training camp, “You gotta’ block to get the rock.”

“As a freshman, what you’ve been asked to do blocking-wise in high school is very different than what you’re asked to do blocking-wise in college football,” Fisch said. “The size of the player you’re blocking is much different than the size of the player you’re blocking now,” Fisch said. “Additionally, a player like a ‘T-Mac’ in high school probably didn’t block a lot. Most of the time, they were down the field, catching balls, so therefore there’s a learning curve in regards to being asked to down-field block and block at the point of attack, being asked to be a part of, ‘Let’s get a play started.’ He’s continuing to build his confidence there.

“Blocking is about angles, and if you don’t have a ton of experience in that regard, if you take a bad angle, then it’s going to look like you missed a block. … A lot of times people — in my opinion — go to where they are rather than where they’re going, and you forget that it’s a moving target. That’s sometimes how you run into blocking issues.”

Fisch said blocking for the receiver group as a whole is a “work in progress.”

“They’re working hard to become good blockers. They’re working really hard to have great confidence in themselves that they can make a touchdown block,” Fisch said. “The guys making the touchdown blocks are the receivers. The guys getting the play started are the O-line, so when you get to make that touchdown block and take great pride in it, that’s when you know you have a good wide receiver corps when it comes to the run game.”

Fisch acknowledged former Wildcat Stanley Berryhill signing with the Arizona Cardinals practice squad this week. “I’m happy for Stanley. Always happy for Stanley’s success,” Fisch said. “I saw him about a week or two ago and we talked about some new opportunities for him, future teams, and I’m really excited to see Arizona brought him in for a workout and then signed him.”

Arizona, Cal could be in for another wild game when they meet Saturday

Here are five of the craziest finishes in UA-Cal history, starring the "Hill Mary" and more.

The Salpointe Catholic-Cienega showdown isn’t the only one worth attending. The Star previews — and predicts — every matchup in town.

Hear what Jedd Fisch said leading up to Arizona's Pac-12 opener at Cal.

News and notes from around Southern Arizona.

Three things to keep an eye on when the Cats face the Bears in the Pac-12 opener in Berkeley. 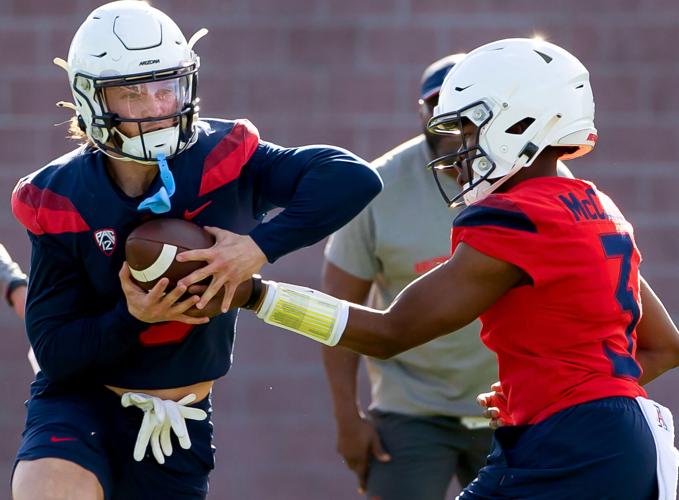 Running back Drake Anderson, left, could see some time against Cal on Saturday if Rayshon “Speedy” Luke continues to be slowed by a leg injury. 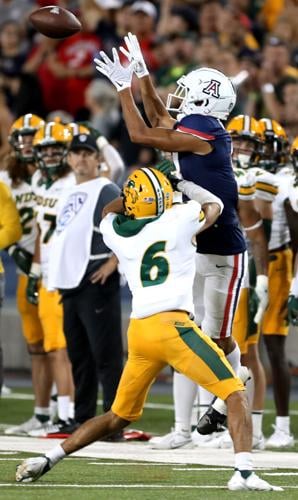 Wide receiver Tetairoa McMillan is learning the finer points of his position as a freshman — including how to block.