As a Wildcat, Rob Gronkowski was no stranger to spring success
Share this
Justin Spears

Whatever you call Rob Gronkowski, just make sure to add “Coach” before the title.

The former Arizona Wildcats tight end is returning to his old stomping grounds to serve as an honorary coach in Satujrday’s spring game. Gronkowski’s red team will clash with the Tedy Bruschi’s blue team.

Gronkowski’s return to Tucson is believed to be his first since 2010, when the tight end watched his former teammates in their spring game. He sported a white Chase Budinger Arizona basketball jersey that day.

A few things have changed since then. The Wildcats have made three coaching changes, dismissing Mike Stoops in 2011, Rich Rodriguez just after the ‘17 season and most recently Kevin Sumlin, replacing him with Jedd Fisch.

Eleven years ago, the Lowell-Stevens Football Facility was metal bleachers and a video board. The Cole and Jeannie Davis Indoor Sports Center wasn’t even a blueprint. There was no artificial turf. No giant video board either.

As Coach Gronk prepares for Saturday, we take a look back at his two spring games, how he fared, and what happened to his UA teammates:

What went down: As a soon-to-be sophomore, Gronkowski led the Wildcats with four catches for 75 yards. Quarterback Willie Tuitama completed 20 of 36 passes for a touchdown.

What happened next: Gronkowski missed the first three games of the ‘08 season with mononucleosis, then broke out for 47 catches, 672 yards and 10 touchdowns. He was named first team All-Pac-10.

Arizona went 8-5 and snapped its 10-year bowl drought by punching its ticket to the Las Vegas Bowl.

To celebrate the winning season, the team held a formal banquet at Westin La Paloma a month after the bowl game. Guard Joe Longacre, tackle Eben Britton and safety Nate Ness were presented with the first Tedy Bruschi Award for their efforts and contributions on and off the field. The award was Stoops’ suggestion.

“We wanted to recognize some of the past and the present, and try to bridge those two parts of our history. There’s nobody better than Tedy, because he personifies so much of who we are,” said Stoops. “He came here as an unsung player and developed into one of the all-time great college players and NFL players. There’s a lot more depth to him other than talent.”

What went down: The ‘09 spring game marked a chance for Arizona fans to witness the quarterback battle between Matt Scott and Nick Foles, a Michigan State transfer.

Arizona’s quarterback situation in ‘09 has some similarities to the current race. UA freshman Will Plummer was the backup to the big-bodied Grant Gunnell, even though Gunnell’s and Tuitama’s statistics and accomplishments are dissimilar, while the tall transfer, Gunner Cruz, is pressing for the starting job and looking for his final destination in college. Unlike ‘09, there’s another quarterback in waiting, USF transfer Jordan McCloud, who will be in attendance for Saturday’s spring game but won’t participate in team activities until June.

“I really don’t think either of us are ahead,” said Foles. “We’re dead even. We’re going to continue to battle now and into the fall. I think having competition like that makes us a lot better.”

Gronkowski hauled in eight catches for 67 yards, but wasn’t the Wildcats’ leading receiver. Delashaun Dean caught four balls for 130 yards and a touchdown.

Foles, Gronkowski and the rest of the winning team earned a steak dinner; the losers ate hot dogs.

What happened next: Gronkowski was sidelined with a back injury that kept him out of the entire 2009 season. Arizona posted an 8-4 record and played in the Holiday Bowl.

Scott was named the starting quarterback for the start of the season, but after losing 27-17 at Iowa to end the nonconference schedule, Foles was installed into the starting lineup.

Foles threw for 2,486 yards, 19 touchdowns and nine interceptions as a redshirt sophomore. Foles would get drafted by the Philadelphia Eagles in 2012, and led the franchise to a Super Bowl during his second stint with the team. Foles remains the only Wildcat to receive Super Bowl MVP honors.

As for Gronk? After sitting out of the 2009 season, arguably the greatest tight end in UA history declared for the NFL Draft and was taken in the second round by the New England Patriots.

First-year Arizona coach Jedd Fisch repeatedly has stressed the importance of having a real home-field advantage.

The program appears to have taken a step in that direction.

The Wildcats’ spring game Saturday is sold out, according to UA athletic director Dave Heeke. Seating is limited to 5,000 at Arizona Stadium to ensure adequate spacing, but the fact that all tickets have been reserved for a noon scrimmage featuring a team that has lost 12 consecutive games is a significant accomplishment.

“Running out of available seats for the spring game in a matter of days is a testament to the Wildcat Family who continue to support our programs and student-athletes through these challenging times,” Heeke wrote in his “Wildcat Wednesday” newsletter. “It is also a tip of the cap to the excitement generated around the program since Coach Fisch, and his staff, began leading our program.”

Fans who haven’t acquired tickets can join a waiting list. Tickets will not be available on site or on a walk-up basis.

The spring game is slated to kick off at 12:07 p.m. Tedy Bruschi and Rob Gronkowski will serve as honorary coaches. The event will feature a halftime “cooldown,” a live DJ and the UA Marching Band. It will be televised by Pac-12 Networks.

Arizona Wildcats' spring football game is sold out; fans can get on wait list

The Cats will conclude spring practice with a scrimmage Saturday at Arizona Stadium; Tedy Bruschi and Rob Gronkowski will serve as honorary coaches.

‘Under construction’: Work is ongoing for Arizona Wildcats QBs as spring winds down

Gunner Cruz and Will Plummer are ‘battling back and forth’; transfer Jordan McCloud will join the QB competition in June.

Arizona Wildcats spring practice No. 13: 'Not much' separation between QBs Cruz, Plummer

Jedd Fisch assesses the Cats' quarterback competition, plus other notes and takeaways as the final week of spring ball gets underway.

Future Wildcats are playing high school football this spring; here's how they're faring

Here’s a look at seven Arizona signees, and how they're faring during the spring high school football season:

At least two key transfers are coming to bolster Brown’s group; plus, Stanley Berryhill III continues to excel and why Gunner Cruz has been off on deep throws.

Arizona Wildcats spring practice No. 14: Tedy Bruschi in the house; Will Plummer on the rise

The 6-foot-3 senior ranked fourth in the country in field goal percentage last season, averaging 14.4 points and 8.6 rebounds per game.

Benn Mathurin will play his sophomore season with the Arizona Wildcats. 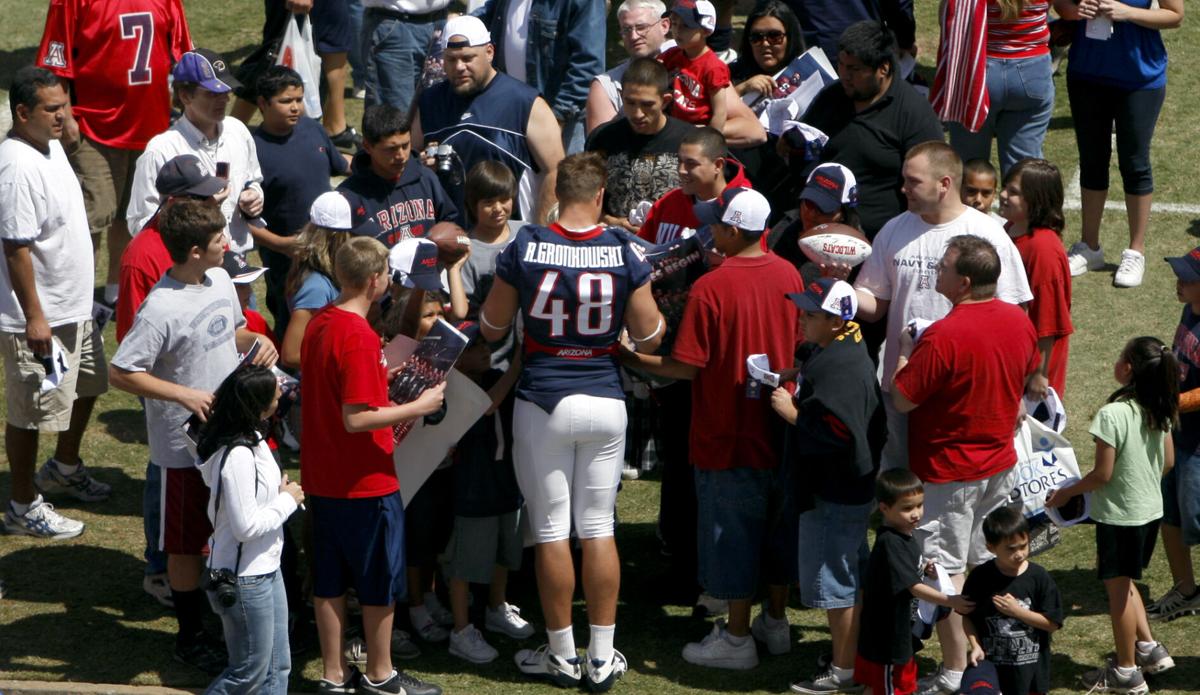 Tight end Rob Gronkowski is surrounded by fans wanting his autograph prior to the start of the UA’s 2019 spring game. Gronkowski will return Saturday as a coach. 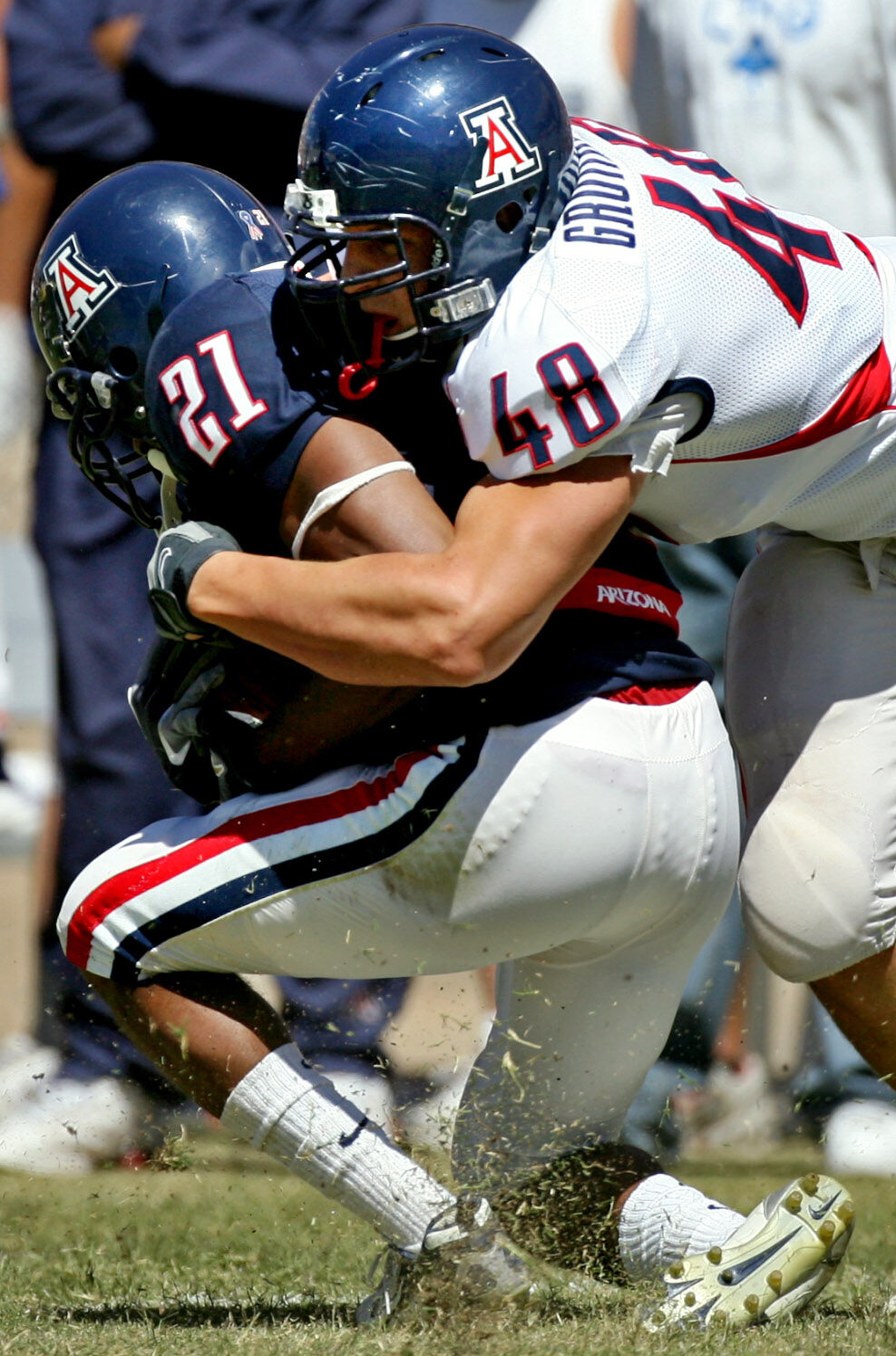