Coincidentally on the same week Arizona and Arizona State face off twice in five days on the basketball court, ASU fans proudly announced on Twitter a new billboard that'll remind Wildcats about the score from the Dec. 11 Territorial Cup game in Tucson.

Unfortunately for Arizona fans, anytime they travel from Tucson to Phoenix, the billboard, emblazoned with the historic 70-7 loss inside two outlined devil heads and the caption "No Pity for the Kitty," can be seen on Interstate-10 heading west, according to the Twitter account "Wired Devils."

Arizona's 63-point loss to ASU, which ultimately ended Kevin Sumlin's three-year stint at the UA, is the largest margin of victory by the Sun Devils in the rivalry. Arizona leads the all-time series 49-44-1, but hasn't won the Territorial Cup since 2016.

It's just the latest petty prank in the history of the Territorial Cup rivalry.

From vandalism to kidnapping: 10 pranks from the UA-ASU rivalry

It was a football conspiracy for the ages.

On a late August night in 1937, ASU student manager Tom Lillico devised a plan to get former Glendale High School all-state football players Walt Ruth, Wayne Pitts and Rex Hopper out of their UA dormitories and onto the ASU roster.

Lillico drove to Tucson and returned overnight with Pitts, Ruth and Hopper.

Vandals from Tempe vandalized UA sidewalks, windows and buildings after the UA opposed allowing the college up north to change its name from Arizona State College at Tempe to Arizona State University.

From the story at that time: "Lettering measuring from one to three feet and saying 'ASU-200. Yes.' was printed on sidewalks, windows and buildings. Principal target was the Student Union building where workers were kept busy Thursday trying to take off the paint."

Three University of Arizona students were apprehended by an off-duty sheriff's deputy who happened to see a missing 1,500-pound bell that had been reported stolen five weeks earlier from the ASU campus in the back of a horse trailer.

The students said they had planned to ring the huge bell during halftime activities at the traditional UA-ASU football game in Tucson.

From the story published at the time: "University police had expressed concern earlier that if the bell were smuggled into the stadium and rung it might cause a riot between the rival student bodies." Dep. Les Godare said it was a matter of luck that he stopped the students, "It was a precisioned-timed operation involving walkie-talkie radios, lookouts and a code that provided for the sighting of law officers," Godare said. The students were "pretty disgusted that their plans had failed only a few blocks from the university."

Four ASU students were cited after the "A" on Sentinel Peak was painted yellow. When a police helicopter swooped over the mountain the officers spotted not only the repainted "A" but also seven men and a car. "ASU No. 1" was also scrawled on the road that winds to the top. Three men escaped but four were apprehended with yellow paint on their hands and shoes.

An anonymous band of Wildcat faithful slipped into Tempe and applied red and blue paint to the large "A" overlooking Sun Devil Stadium. UA students also hung an anti-ASU banner from the third floor of an ASU parking garage, chalked sidewalks and soaped windows with pro-UA epithets and put blue bubble bath in the fountain on the mall. "In terms of the pranks, we kind of dominated the week," boasted the UA student body president.

Tucson police spotted ASU students, who had several gallons of gold paint, as they climbed "A" Mountain after they 'went up the wrong hill the first time.'

No arrests were made and the ASU students were escorted out of the city by police.

An unknown group of vandals managed to splash some maroon and gold paint on the white-washed "A" shortly after midnight in November, 1990. The vandals left behind some rollers and a couple of buckets of paint.

Meanwhile in Tempe, after the "A" over Arizona State was vandalized. About 11 paint-splattered Wildcats were caught red-and-blue handed at a shopping mall.

A 12-foot-tall bronze statue on the University of Arizona campus depicting four bobcats — a male, a female and two kittens — and benches near the sculpture were covered with yellow spray paint and the letters “ASU” in late November, 2013.

The vandalism camejust days before the rivalry football game between the UA and Arizona State University.

The artwork, called “The Arizona Wildcat Family,” which sits south of the Administration Building, is dedicated to former UA President Peter Likins and his wife, Pat.

A powerwasher and a chemical solution were used to remove the graffiti from the statue, and no permanent damage was done, said Chris Kopach, the then-assistant vice president of facilities management at the UA.

The "A'' on "A'' Mountain in Tempe — the home of Arizona State University — was painted red by Wildcats fans in November 2013 a few weeks before the big rivalry game.

In early November 2014, homecoming fever got the best of some UA fans who painted Tempe's "A" Mountain red and blue.

The UA fans who vandalized the mountain also wrote "Bear Down U of A" on the "A."

Students at the University of Arizona were fooled by some ASU students into supporting fake legislation that would return the Tucson school to Mexico's possession.

Four ASU students drove down to UA's campus and posed as petitioners.

The group told UA students they were garnering signatures for "Proposition 200" that would return the university to Mexico as it supposedly was built on stolen land.

The petition signing was picked up by the UA's student newspaper, the Daily Wildcat.

The paper's editorial leaders wrote Wednesday that they were embarrassed by the bogus story and hoped a Wildcats' win in Saturday's game "will settle the score."

University of Arizona students press on through another semester of uncertainty

Students said they are working through pandemic campus life, hoping for more normal times ahead.

Portal, patience appear to be Arizona Wildcats’ best options to add a quarterback (or two)

Jedd Fisch and the UofA staff need to supplement the QB room after two transfers and a decommitment left the Cats with only two scholarship passers.

The Wildcats wear SafeTags, a device that times how long people are in close contact with each other.

The Wildcats and the Pac-12 are moving forward with plans for a typical 56-game schedule, although the odds of pulling that off without incident are minute.

Jedd Fisch completes his first on-field staff for UofA by adding Dudzinski, who has a long history with defensive coordinator Don Brown.

Irving had five tackles in 11 games over three seasons for UofA football; he'll be immediately eligible elsewhere as a graduate transfer.

'It's Personal' montage: Arizona coaches explain what it means

A montage of the Arizona Wildcats football coaches talking about the new mentality of 'It's Personal' and why it embodies Arizona.

The Arizona Wildcats' new football staff was introduced for the first time on Thursday. Hear what Jedd Fisch had to say about his assistant co…

Arizona DL coach Ricky Hunley on returning to UA, coaching philosophy and his time as a Wildcat

'Be positive and attack every day': Don Brown talks about his philosophy, approach as Arizona's new DC

A Q&A with the UofA defensive coordinator, who has engineered turnarounds and led top units at multiple coaching stops.

Polian, who was Arizona's associate athletic director and chief of football staff for two seasons, will now have a similar role at Baylor.

Watch the full highlight of Tubelis' game-winner in Tempe.

Arizona State fans raised money for a billboard between Tucson and Phoenix that flashes the 70-7 score from the 2020 Territorial Cup. 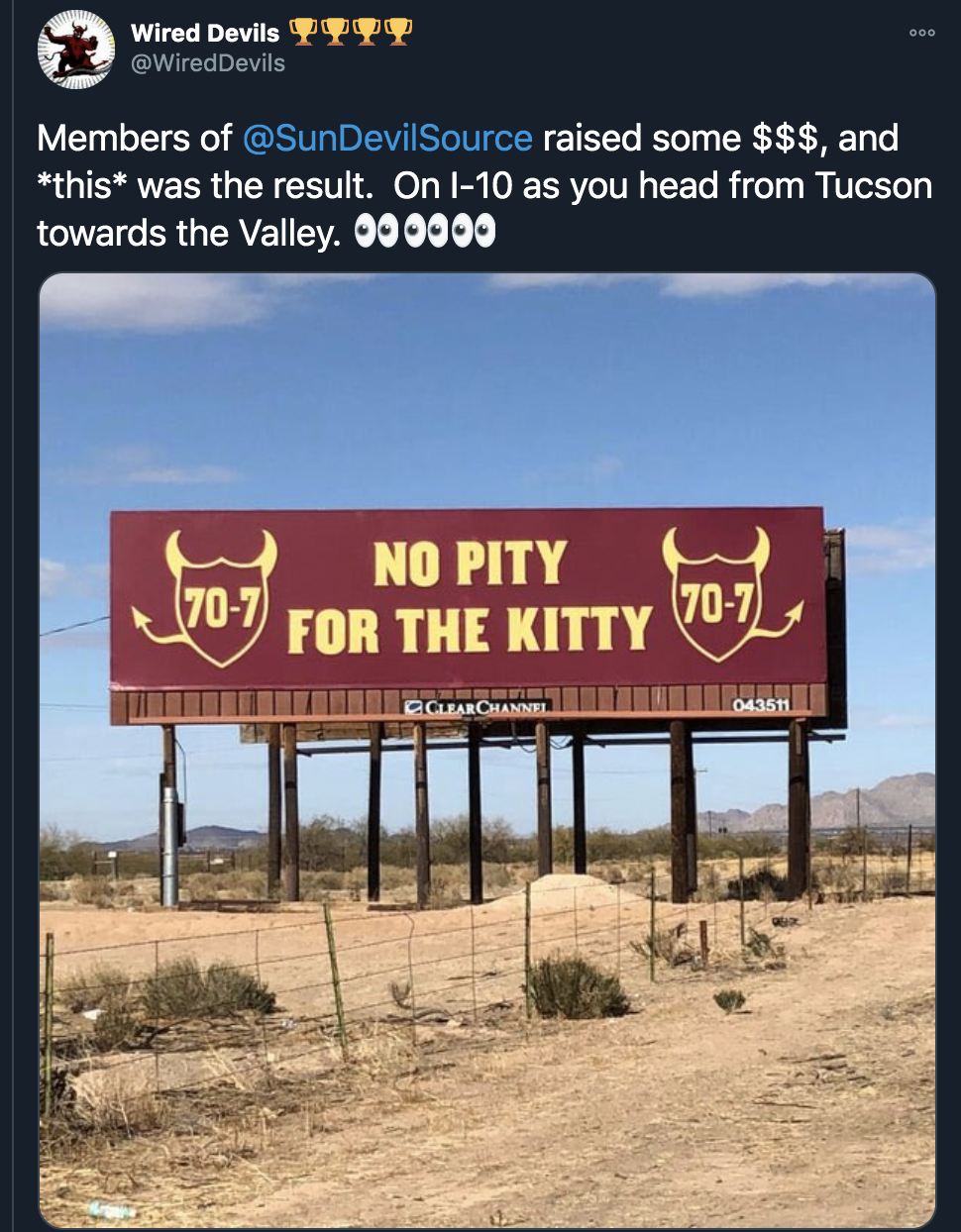 Arizona State fans raised money for a billboard between Tucson and Phoenix that flashes the 70-7 score from the 2020 Territorial Cup.