After last season — a lost season in every sense — Jace Whittaker had options.

The veteran cornerback had one more year of eligibility. He could have left Arizona as a graduate transfer, a popular move for players across the country. Or he could have declared for the NFL draft.

The way Whittaker saw it, though, there was only one option: return to the UA to finish what he started.

Whittaker didn’t expect to still be here last August, when he was training for his senior year. A hamstring injury kept him out for the first two games. He came back for Week 3 against Southern Utah, but on the first series, while making a tackle, Whittaker hurt his left elbow. He would miss the remainder of the season.

“That’s football. That’s life,” Whittaker said. “Things happen unexpectedly. You don’t have an answer for everything.”

Whittaker suddenly and unexpectedly had a new role: serving as a player-coach for an inexperienced group of corners. Arizona tried desperately to fill Whittaker’s spot opposite Lorenzo Burns, cycling through a variety of options who weren’t as accomplished as Whittaker.

Instead, Whittaker spent the season trying to coach up his teammates. He often would suit up and participate in pregame warmups. It wasn’t the same as having him on the field.

“He’s a natural leader out there,” UA cornerbacks coach Demetrice Martin said. “He’s kind of an extension of myself. He’s a coach on the field. He gets guys lined up. He knows what offensive plays are about to come because of formations, tendencies, splits and down and distance. That helps the other guys be a little more confident about their job.”

“It was just being one of the guys,” Whittaker said. “You’ve gotta … do anything you can to help the guys who are ready to play.”

Whittaker tried to answer any questions the younger players had. He tried to clear up any confusion they felt.

“They’re still here,” Whittaker said. “They survived, and I think they succeeded. Everything they learned, they’re using it to their best abilities.”

Whittaker is still here, and he couldn’t be happier about it. Whittaker, his family and the coaching staff agreed that returning would be his best move. Despite having to wear a brace on his left arm, Whittaker said he’s “full go” in practice, able to make tackles and do what he really came here to do.

“It’s a lot of mixed emotions right now,” Whittaker said. “I feel like I haven’t played football in a while. It just feels great to be back running around.”

Laie to the League?

As Arizona’s defensive line coach, Iona Uiagalelei has a front-row seat to every big-guy battle. When he looks across the line at Donovan Laie, Uiagalelei sees someone who’s “going to be playing on Sundays” someday.

Laie is a long way from the NFL. Academically, he’s still a freshman. But Laie has the frame (6-5, 318) and game to get on that track.

Laie started every game last season: nine at right tackle, three at left, which has become his permanent home. That’s a rare accomplishment for a true freshman at any program. It was partly out of necessity, but it quickly became apparent that Laie belonged among Arizona’s first five.

Kyle DeVan, the Wildcats’ first-year offensive line coach, knows what it takes to play in the NFL. DeVan appeared in 40 games across four seasons with the Colts, Eagles and Titans. He started at right guard in Super Bowl XLIV.

Asked if Laie has NFL potential, DeVan said: “When you talk about body types and athletic ability and strength, all the parameters the NFL sets, he would meet all those. If he keeps developing … I can definitely see him playing on Sundays.

“We’ve just gotta get that mentality in him: ‘You can kick anyone’s butt in this conference on an every-play basis.’ I’m excited to work with him for the next three years and see where this thing goes.”

DeVan said Laie has “a lot” of natural ability. The challenge is transforming that athleticism into football functionality — teaching him to control his body, move his feet and use his hands the right way every play.

Laie, who came to Arizona as a three-star recruit from Oceanside, California, said he feels more confident entering his second season. It might not have looked like it, but Laie said he felt “kinda confused” at times as a freshman.

Laie came to Tucson with an air of confidence. Although it’s unusual for offensive linemen to play, let alone start, as true freshmen, Laie said he knew he had a legitimate shot. It was one of the reasons he picked Arizona. Getting to block for Khalil Tate was another.

“I knew I’d have a chance right away,” Laie said. “I had a size advantage. So I knew I was going to contribute either as a backup or in the starting lineup.”

Despite injuries, inexperience and a lack of depth, Arizona patched together a respectable offensive line under Joe Gilbert, who since has returned to the NFL. The Wildcats led the Pac-12 in total offense and rushing.

Laie had a different take. He said last year’s line was just “OK.” He foresees bigger and better things from this year’s group now that three of them — Laie, Cody Creason and Josh McCauley — have a full year of starting experience. Junior-college transfers Josh Donovan and Paiton Fears also have impressed.

“I feel like we’re much better this year,” Laie said. “There’s a lot to be excited about. It’s just another year to improve and hopefully get a Pac-12 championship here.”

Big problem: Lack of bulk on D-line might be Arizona Wildcats’ largest concern

The UA has the makings of a suitable rotation on the interior of its defensive line, but many questions linger.

Improved health, greater knowledge and a new coach could help the junior linebacker take off in 2019.

Murray tweets - on April 1 - that he's joining Jason Witten in returning to the Dallas Cowboys.

The former NFL All-Pro talks about his new boss, his new job and his new pupils in a Q&A with the Tucson media.

The quarterback discusses everything that went wrong in 2018 — and how he can go about making it right in his final campaign.

Suddenly the old guy in the UA receiver room, Peterson is embracing his newfound role as a veteran leader.

The Wildcats’ offensive coordinator and QB coach talks all things Tate, from his performance in 2018 to where his game is now, on and off the field.

Mitchell got hurt in high school and wasn’t a Sumlin recruit; the coach honored his scholarship anyway.

UA coach Kevin Sumlin details what went on in the team’s closed scrimmage and provides additional updates in a Q&A with the media.

The Dallas Baptist basketball player chose the Wildcats over SMU and Memphis. He isn't sure which position he'll play at the UA.

X-factors for Arizona: Dixon, Adams, Curry have inside track on key outside receiver spot

None of the top candidates to replace Shawn Poindexter has a catch in college, but all have the size and talent to become worthy successors.

Arizona Wildcats' new 'Bandit,' Christian Young, could prove to be a steal

Young held his own as an emergency cornerback as a freshman; he’s now settling in at safety.

Moore, who also has worked at Arkansas and Abilene Christian, succeeds Andy Vaughn as the UA's senior director of recruiting and high school relations. 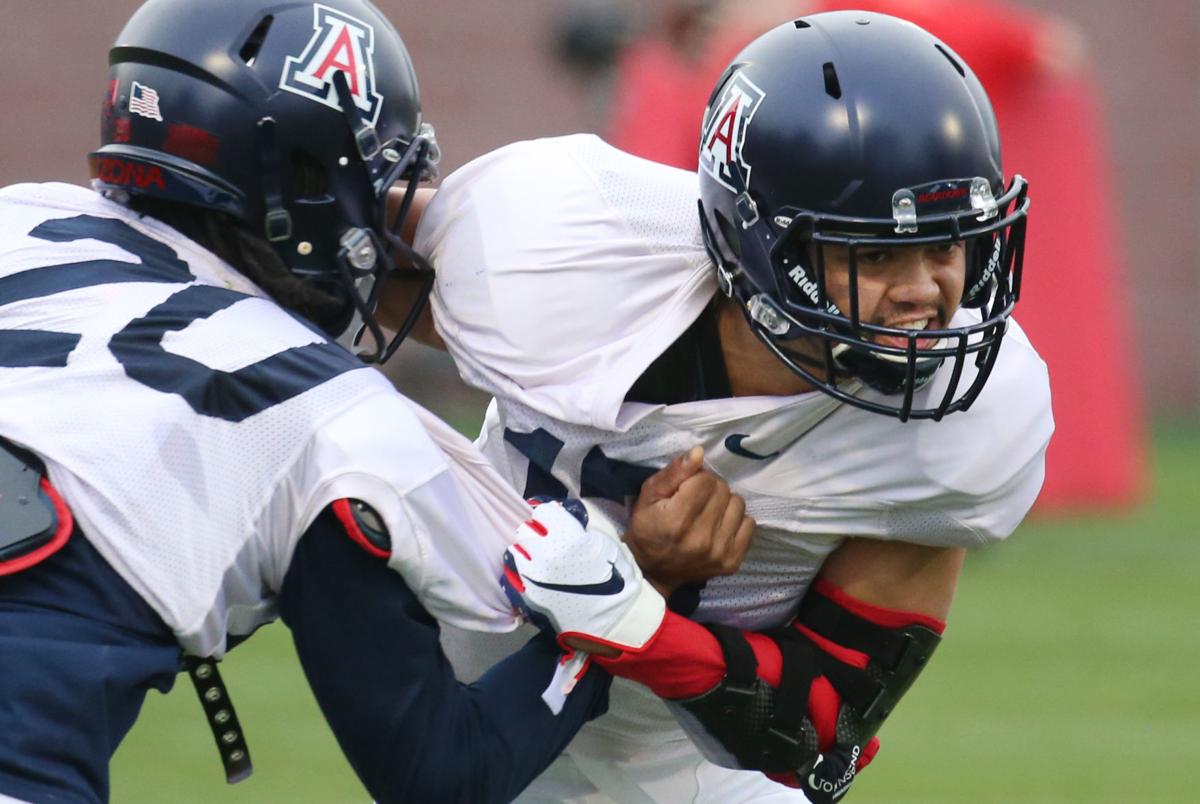 UA cornerback Jace Whittaker played one series last season, missing most of the year with hamstring and elbow injuries. 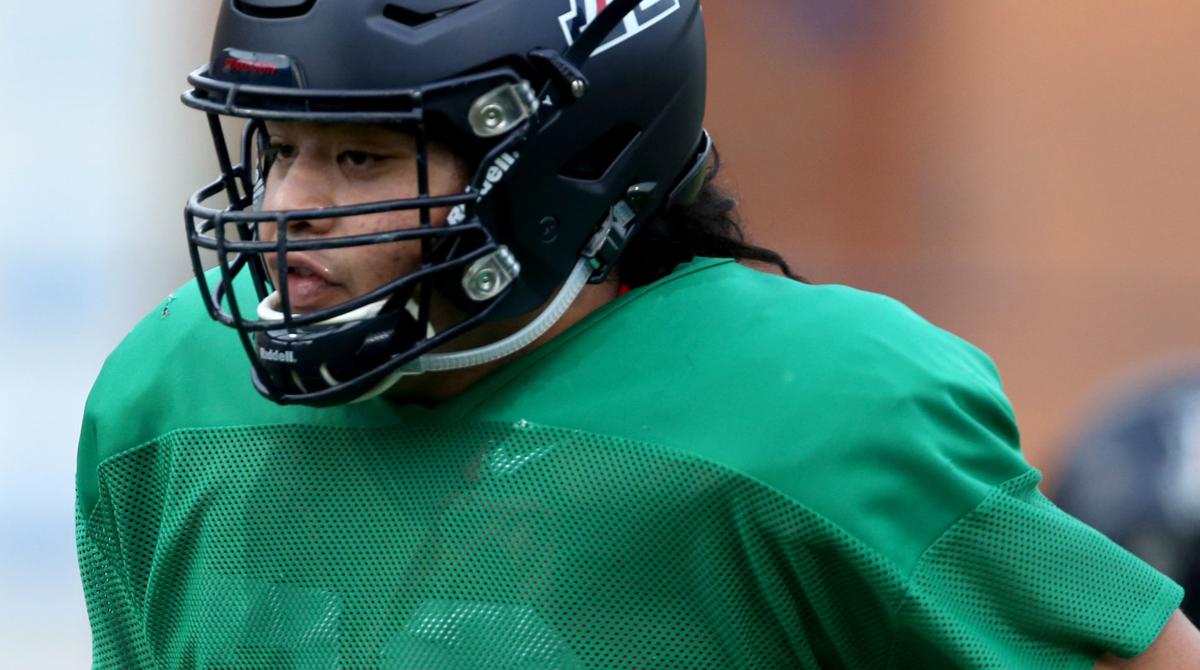 Offensive lineman Donovan Laie runs through drills during a spring practice at the University of Arizona, Wednesday, March 27, 2019, Tucson, Ariz.