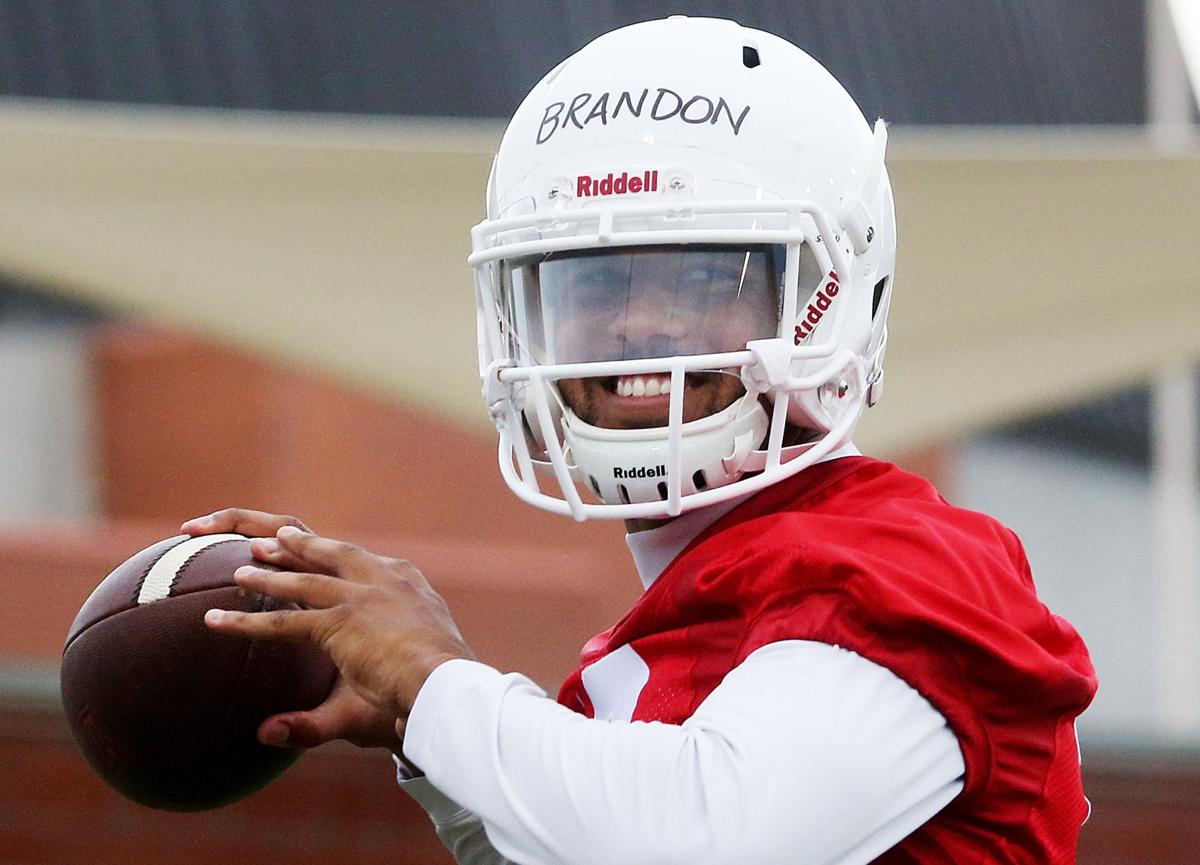 Brandon Dawkins has been the expected choice during fall camp to be the starting quarterback, but UA coach Rich Rodriguez won’t say who will get the nod Saturday against NAU. Dawkins is listed along with Khalil Tate as the possible starters at the position. 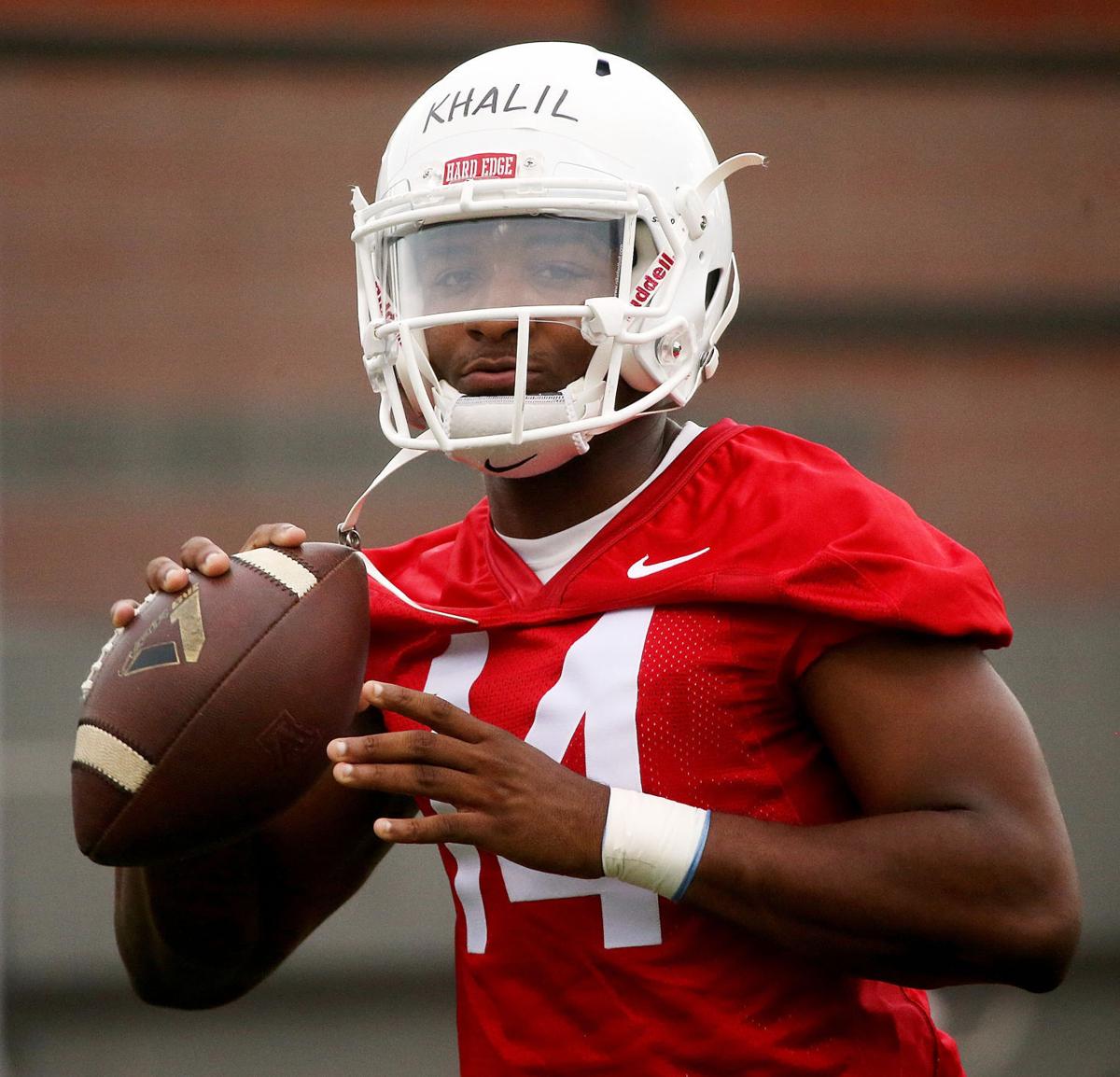 Khalil Tate is listed as a co-starter at QB after notching 243 passing yards and 237 rushing yards as a freshman last year. “The competition has helped all the quarterbacks,” said UA coach Rich Rodriguez.

Rich Rodriguez, master of suspense, again has elected to withhold the identity of his starting quarterback for the season opener.

Brandon Dawkins and Khalil Tate are listed as co-starters on the Arizona Wildcats’ official Week 1 depth chart, released Monday. Their names are boldfaced, and they are separated by the word “or.” So what does that mean exactly?

“Not as much as you all would like to put into it,” Rodriguez said during his first weekly news conference of 2017. “It’ll start to clear up a little bit.”

Rodriguez’s brief explanation suggests he has a plan in mind for Saturday’s game against Northern Arizona. All signs since the UA started practicing in late July point to Dawkins, who started nine games last season as a redshirt sophomore.

Both quarterbacks have taken practice reps with the first team, Rodriguez said. And both have improved since last season.

“That’s been the good thing,” Rodriguez said. “The competition has helped all the quarterbacks, in particular those two.”

Arizona added three freshmen to that mix in the offseason. Two of them, Donavan Tate and Rhett Rodriguez, are listed as co-No. 3 quarterbacks behind Dawkins and Khalil Tate.

Overall, Rich Rodriguez believes the Wildcats are “in a pretty good spot” at the position. Whether that translates to increased production remains to be seen. Arizona ranked 10th in the Pac-12 in passing yards per game (178.1) last season and tied for last in touchdown passes (13).

A fourth freshman, Colin Schooler, is listed as a co-starter with Brandon Rutt at “Mike” linebacker.

Rodriguez expected all along that this year’s freshman class would have an immediate impact; 13 are listed on the two-deep for NAU.

What Rodriguez wasn’t sure about was how quickly the newcomers would grasp the playbook.

“That was part of my dilemma,” he said. “We’re going to have a lot of young guys, particularly defensively, that are going to have the chance to help us out. How much do we put in?

“You don’t want to confuse them. But you have to have enough defense to be able to stop all the variety of schemes that you’ll see from week to week. I think our coaches did a good job of that, and the players deserve a lot of credit for learning so quickly.

“We didn’t really have to scale back as much scheme-wise on either side of the ball as I had originally thought, because they were such quick learners.”

Young and Schooler both will have call-relaying responsibilities. Young’s backup is redshirt freshman Jarrius Wallace, who also will be making his college debut Saturday.

Young had been battling with sophomore Isaiah Hayes, who is not listed on the depth chart because of an undisclosed injury. Rodriguez said Hayes could be available vs. NAU.

Arizona’s Week 2 opponent, Houston, has had to relocate its base of operations to Austin because of Tropical Storm Harvey. When the Cougars will be able to return home is unclear.

Still, UH spokesman David Bassity said the situation “is very fluid on what the next steps on our schedule will be like,” according to the Houston Chronicle.

Rodriguez spent two seasons at Tulane, so he’s familiar with how volatile and dangerous the weather can be near the Gulf of Mexico.

“You try to have plans,” Rodriguez said. “But when it happens, something like this, it’s certainly a tough thing to deal with.

“Athletic events have taken a backseat, I’m sure, to what’s going on with the folks that are just struggling to find a place to live.”

Who: NAU at Arizona, season opener

A Q&A with the freshman cornerback who will play a sizable role in the secondary and on special teams this year.

RichRod: Despite absence from depth chart, Arizona Wildcats freshman RB Nathan Tilford will have role in 2017

Highlights from the UA's media availability after practice Tuesday morning.

Michael and Zack break down Arizona's first depth chart of the season and discuss who they think will be the starting QB on Saturday vs. NAU. …

Solomon started for the better part of two seasons at the UA before leaving as a grad transfer.

UH cancels or postpones all athletic events scheduled for this weekend because of Tropical Storm Harvey.

The fourth-year offensive lineman has risen from ‘unrecruited’ walk-on to first-team left guard.

Undersized Pittsburgh native was one of two UA players to earn a full ride this week.

The Star's Michael Lev, Zack Rosenblatt and Ryan Finley weigh in on which teams to watch starting tonight, when Pac-12 play opens in Tempe and…

Californian, Alabaman impressed UA coaches throughout the preseason. Both should play significant snaps Saturday against NAU.

Zack takes the reins! In his debut as host, Zack calls out to Michael Lev to preview the NAU game, takes questions from Twitter (#AskBlatt) an…

Brandon Dawkins has been the expected choice during fall camp to be the starting quarterback, but UA coach Rich Rodriguez won’t say who will get the nod Saturday against NAU. Dawkins is listed along with Khalil Tate as the possible starters at the position.

Khalil Tate is listed as a co-starter at QB after notching 243 passing yards and 237 rushing yards as a freshman last year. “The competition has helped all the quarterbacks,” said UA coach Rich Rodriguez.