Read Today's E-Edition
Share This
Biggest takeaway from Arizona’s spring game? The UA defense keeps getting them
Share this
1 of 2 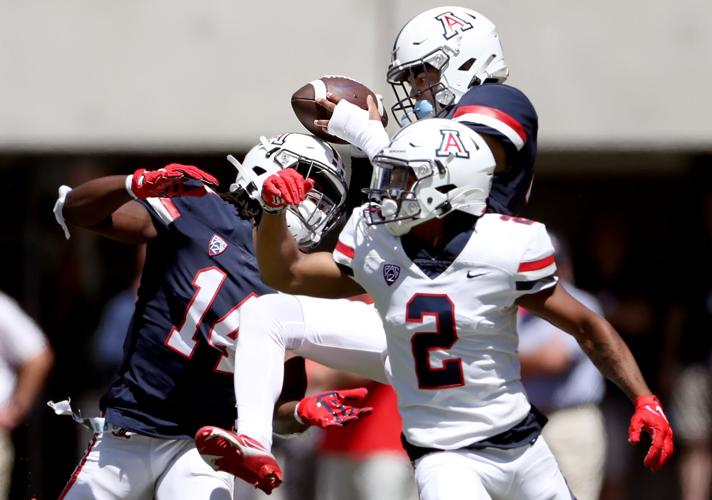 Safety Jaydin Young leaps in to intercept a pass intended for receiver Jacob Cowing during the first quarter of Saturday's spring game. 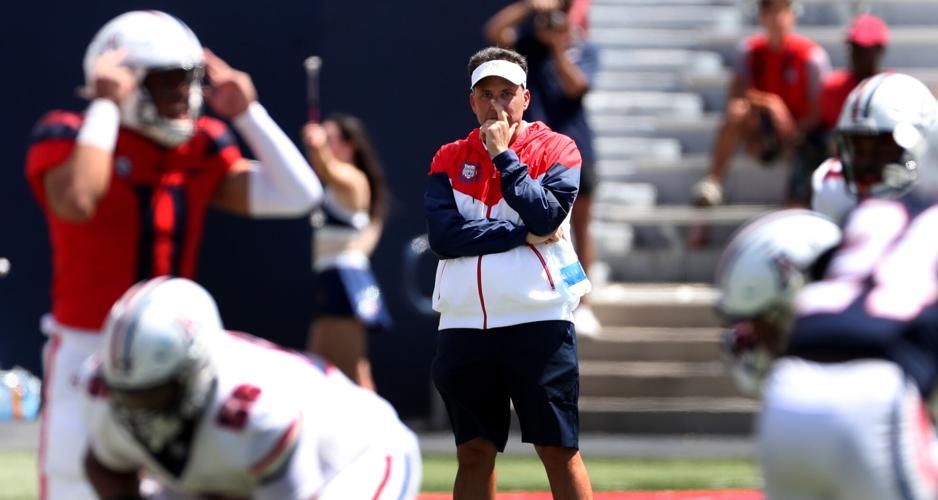 Coach Jedd Fisch watches his Wildcats line up for a play.

The signature play of Arizona’s spring game Saturday came early in the second quarter, when safety Jaxen Turner intercepted a Jordan McCloud pass and returned it 90 yards for a touchdown.

It was the 25th takeaway by the Wildcats defense over the course of spring practice. That’s the good news.

The bad: It was the 25th turnover by the UA offense.

“It’s a double whammy,” second-year coach Jedd Fisch said. “We understand that we have to protect the ball — and we have to take the ball away. That’s going to happen in these practices.”

Although he runs the Arizona offense, Fisch would rather have an abundance of turnovers than hardly any at all.

“What would be horrible is if we had no takeaways,” Fisch said.

He more or less lived through that last season. The Wildcats forced six turnovers, tied for the fewest in FBS. They had 23 giveaways for a minus-17 turnover margin — the nation’s worst. It was one of several reasons they went 1-11 in Fisch’s first season.

New defensive coordinator Johnny Nansen has made takeaways a point of emphasis since he arrived in December. He has the Wildcats playing more zone coverage, enabling defenders to read the quarterback.

“We went through training camp last year and had two picks. We can’t have that (again),” Fisch said. “I love the way our guys are attacking the ball. I’m proud of our defense.

“We gotta continue to clean it up offensively and not give the ball away. And we’re gonna be committed to doing that.”

First-team quarterback Jayden de Laura also threw an interception. He said the play wasn’t run correctly but took the blame for throwing the ball anyway. The pass was intended for Jacob Cowing. Safety Jaydin Young picked it off.

He added that “better decision-making” and “getting on the same page as the receivers” should lead to fewer interceptions. He plans to improve in those areas through offseason workouts.

“Just building the trust in the quarterback room as a whole,” de Laura said.

Although he was playing for the Blue Team and Turner scored for the Red Team, safety Christian Young was pleased to see his secondary mate make a big play. Young said the defense has a thrown-like “turnover chair” in the defensive meeting room that might be brought out for games.

“Whoever gets the most turnovers gets to sit in that thing,” Young said.

Quarterback Will Plummer is expected to miss 4-6 months following surgery on his throwing shoulder Friday.

Plummer initially suffered the injury in Arizona’s win over Cal on Nov. 6 last season. Plummer returned to that game, played the rest of the season and tried to work through the injury without surgery.

“We tried to go through a more conservative approach early on, because it’s his throwing shoulder — not something that you necessarily want to have to fix — but we made a decision this past week to fix it,” Fisch said. “From all accounts, it was successful. Now we just have to wait and see.”

Fisch said Plummer conceivably could return by late August or sometime in September. He participated in all 14 previous spring practices but didn’t receive many reps behind de Laura, McCloud and freshman Noah Fifita.

Plummer, who will be a third-year sophomore in the fall, completed 155 of 267 passes for 1,610 yards with six touchdowns and nine interceptions in 2021. He also rushed for two scores.

Freshman offensive tackle Jacob Reece revealed Friday that he has been diagnosed with hypertrophic cardiomyopathy, a heart condition that kept him from participating in spring drills.

It’s unclear whether Reece, a three-star recruit from Salt Lake City, will be able to play football again. He enrolled at Arizona in March but never suited up for practice.

“It was all diagnosed upon arriving here,” Fisch said. “I can’t tell you how appreciative I am to our medical staff for finding it in his physical the day he got here. Immediately we went into protocols.

“A decision needs to be made after all the testing is completed. We should have a pretty good feel in the next 7-10 days where we can head.”

Freshman tight end Keyan Burnett scored the first touchdown of the spring game, catching a 7-yard pass from McCloud. The play was allowed to continue despite Jalen Harris being in range for a sack.

Turner’s pick-six for the Red Team knotted the score at 7-7. The Red Team took the lead on Tyler Loop’s 45-yard field goal and expanded it to 17-7 on Fifita’s 16-yard touchdown pass to AJ Jones.

The Blue Team got within a field goal on a TD pass to Sam Thomas — yes, that Sam Thomas. The former UA women’s basketball standout snuck onto the field to snare a pass from McCloud in the right corner of the end zone.

The Red Team again made it a 10-point cushion on a 31-yard touchdown pass from Fifita to Jalen John. Gunner Cruz’s 33-yard TD pass to Tetairoa McMillan made it 24-21, but the Blue Team couldn’t recover on an onside-kick attempt, ending the scrimmage.

Fisch said he won’t release a post-spring depth chart and therefore won’t name any starters, even at quarterback. “There’s so many position groups, you start naming one starter in spring, and then it’s like, ‘Who’s gonna be the starting back? Who’s gonna be the starting receiver?’ I think our team has a really good feel of where we’re going with it,” Fisch said. “Jayden has certainly proven that he can lead our team. And we’ll leave it at that.”

Fisch said the No. 1 jersey is “up for grabs” on offense entering the summer. Receiver Stanley Berryhill III, who’s prepping for the NFL draft, earned the No. 1 last season. Harris will continue to wear it on defense.

Former UA lineman and community leader Julius Holt, who died earlier this month, was honored via a video tribute on the scoreboard shortly before kickoff.

'Be a part of something special, man': Class of 2023 QB Brayden Dorman recruiting others to UA

Dorman talks about his relationship with coach Jedd Fisch and recruiting other players to Tucson.

For Star subscribers: Jedd Fisch’s overhaul of Arizona’s wayward football operation isn’t really a rebuilding job as much as it’s a full transplant. Part I is working,

The Star's longtime columnist checks in with notes about the Mets' unlikely Opening Day starter (and his Tucson connection), the Wildcats' chances of winning the Pac-12 in tennis, and the most important hire the UA has made in a while:

Schools, agents, immigration agents and international athletes are carving up the massive gray area as they see fit — and wondering what each other is really doing.

Gabe York made his NBA debut on Saturday with the Indiana Pacers.

Arizona falls 5-2 in Phoenix, and has just 10 total hits in three games this season.

The right-hander, fully healthy after an arm injury, throws five scoreless innings as the Cats defeat the Cougars 5-2.

San Diego wins 10-5 on Sunday to take three of four in the season-opening series over Arizona in Phoenix.

Sharlize Palacios drives in four as UA wins 9-1 for its second Pac-12 win.

For Star subscribers: Jedd Fisch’s insistence on funding and developing a recruiting/relations staff twice as large as any in school history is making a difference.

With Arizona spring football in the rearview mirror, the Star is exploring three lingering questions about the Wildcats.

Chase Davis, Arizona’s sweet-swinging lefty, also doubled, was walked intentionally and was hit by a pitch.

Another Wildcat to leave Arizona has found a new home.

Safety Jaydin Young leaps in to intercept a pass intended for receiver Jacob Cowing during the first quarter of Saturday's spring game.

Coach Jedd Fisch watches his Wildcats line up for a play.

Defensive lineman Ugochukwu Nosike hoses down the fans during Saturday’s spring game. Temperatures were in the 90s for the noon start. 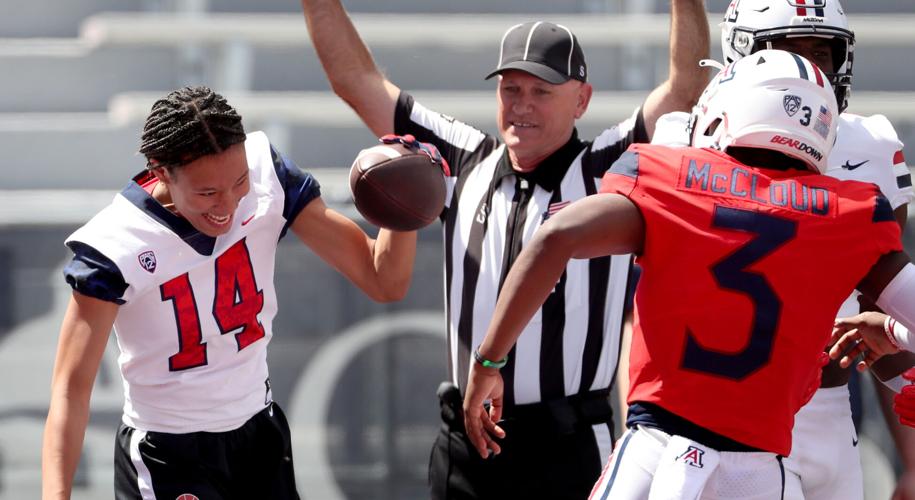 UA women's basketball player Sam Thomas spikes the ball after catching a pass counted as a touchdown from Jordan McCloud.