Thirty-three years ago, my husband Chuck made one of the greatest plays in Arizona football history. For those Arizonans or younglings who may not understand the historical relevance to Wildcats fans, here’s the scoop. In the fourth quarter of the Arizona vs. Arizona State game, Chuck — an average-sized, fierce safety with the number 6 on his back — picked off ASU quarterback Jeff Van Raaphorst in the end zone and ran 106 yards for a UA touchdown, cementing a victory against our biggest rivals.

Many beautiful people have shared with me their memories of that day. You can feel their love for Chuck as if he were their own son or brother. He, along with the boys from the “Desert Swarm” era, reluctantly became the hard-working identity of the Bear Down culture. Decades later, it still warms my heart to hear your remembrances. Please never stop telling them to me; it means the world.

At 55 years old, you would think the embers of Chuck’s fire to beat ASU would have cooled. That as a 17-year coaching veteran, somehow his desire to throat-punch the Devils would have died. That is just not how Chuck’s mind and heart work. You cannot quell his love of Arizona or his loathing of ASU.

With over 30 years of supporting the Cats that have included changes in the guards, catchy hashtags and slogans, wins and losses — his ferocious loyalty will never dull. I can promise you that Saturday’s game is the only one that matters. Chuck is the pinch-hitter defensive coordinator for Arizona now, and a win against ASU would be a beautiful way to wrap up his season.

Social media has become a massive communications vehicle for athletic directors and coaches to reach students, donors, recruits, the media and even board of regent members. Progressive leaders use social media authentically to showcase their personalities with original content and enlist experts to help them create social media strategies, calendars and posts to keep a consistent stream of communication that best reflects their culture, programs and institution.

The downside of social media is that it gives individuals the authority to say shabby quips (often using fake usernames) that they wouldn’t dare to say to a person directly, creating a counterfeit bravado.

My Team at Anachel/SM2 advised a small think tank of Power 5 conference athletic directors on how to best cope with being harassed by a consistent thread of online garbage.

There were three basic principles. The first is that there are technology tools and laws to locate and help identify online harassers, particularly when it’s directed at minors. We use them. Yes, they are expensive, but effective.

The second is that social media platforms can help. Twitter has its own policies that state users “may not engage in the targeted harassment of someone or incite other people to do so,” but you must report (anonymously) the meanie. It’s simple and takes two seconds. Simply click on the little arrow next to their post.

A dropdown will appear giving you the option to report the user. In time the user may be removed from the platform, but you must have evidence that you have followed the platform’s protocol.

Lastly, block people who are harassing you. Social media isn’t a democracy. You wouldn’t let a knucklehead come into your house and punch you in the face day after day. However, many ADs who work for a public institution feel they can’t hit the block button.

We enlisted Michael Overring from my team to do some research for the ADs. He is one the country’s most preeminent digital attorneys. He told us, “An athletic director at a state university is a public employee. And, in speaking about the athletic department or the university, he is a public figure. So, in the case of defamation law, the AD will have to have thicker skin than a soccer mom or a bank teller. But the notion that the AD is a public official doesn’t turn him into the President of the United States, either.”

President Trump learned last summer that tweeting public pronouncements caused his Twitter accounts to be treated as a public forum for purposes of first amendment rights of the public.

Why? Because the President used the accounts for official business, including business that requires the maintenance of the public responses as part of the Presidential Records Act. When President Trump acted to block certain members of the public who disagreed with him, the court said he couldn’t do that.

“Athletic directors are different,” Overring said. “First, they are not subject to the Presidential Records Act. Second, they generally use Twitter and other social media to promote matters of interest regarding their sports teams — not to set policy or terminate employees. The differences matter: In the absence of a University policy requiring otherwise, an AD who is being stalked or trolled on social media has every right to block the troll.” Yay!

The reality is we’ve had armchair quarterbacks in sports for 50-plus years. I believe most people are pretty decent. Some harassment is just a misguided passion for a program, team and school. All of us have to do our best and tune out negativity, encourage positive conversation and perhaps engage with constructive feedback. Every case is different. My column isn’t giving you legal advice, but I hope it helps. (I had to add that — wink).

Last week, the Arizona Board of Regents voted unanimously to extend athletic director Dave Heeke’s tenure through 2023. As a crisis advisor in sports looking from the outside in, I feel like Heeke sometimes doesn’t get a fair shake — he’s been drinking from a firehose from the moment he walked onto campus. I can imagine him stepping into his office on the first day and someone saying, “Oh, by the way….” And those unknowns have slightly overshadowed the good work and forward progression that he and the athletic department have completed over the last couple of years.

I don’t work for Arizona, but I do work with ADs across the country, and I have to tell you, their jobs have become a complex crisis tilt-a-whirl. (Which is job security for me.)

They have to make tough decisions. Sometimes they get it right, sometimes they don’t, and sometimes things are just out of their hands. I’ve had an opportunity to delve into Arizona’s strategic plan for the athletic department, and it’s pretty solid.

It’s a map penned by Heeke and others to help Arizona’s athletic department to be on the right course for the future, but it’s going to take courage and a good hand on the wheel. Congrats to Heeke and his team on this vote of confidence. Let’s get it done the right way.

A time for giving

Saturday, I caught up with my high school friend and UA alum Lisa Chastain and UA supporter Humberto Lopez. Lisa is the executive director of the H.S. Lopez Family Foundation Center of Opportunity.

Last year our family joined forces with the Gospel Rescue Mission for their Annual Thanksgiving Street Banquet on 28th Street to serve 2,458 meals to those in need. Wednesday, we’ll be at their new home, the H. S. Lopez Family Foundation Center of Opportunity on Palo Verde Road. The Christ-centered shelter offers healthcare, veterans’ services, affordable housing and more. The team is working hard to make a difference for the men and women in our community.

You may not have the time or energy to serve meals, but there are plenty of ways that you can make a difference. Want to give to the H.S. Lopez Family Foundation Center of Opportunity? Visit grmtucson.com/welcome200donation.html

Happy Thanksgiving, friends. We’re blessed beyond the wins and losses. As always, I appreciate you reading. Eat too much, have some vino and hug the people you love– life is short!

Carrie Cecil is a sports industry insider who handles crisis and reputation management for collegiate and professional sports head coaches, athletic directors, athletes, league commissioners, general managers and more. She lives in Tucson with her husband Chuck, a former UA football star who's now the Wildcats' defensive coordinator, and their daughter.

Daniels, tailback Eno Benjamin and receiver Brandon Aiyuk will be a handful for the struggling UA defense in the 2019 Territorial Cup.

Carrie Cecil: Why gratitude is our key word, how we're remembering Dick Tomey and what to do Saturday

Carrie Cecil: Football — and fluids — pump through our veins during busy week 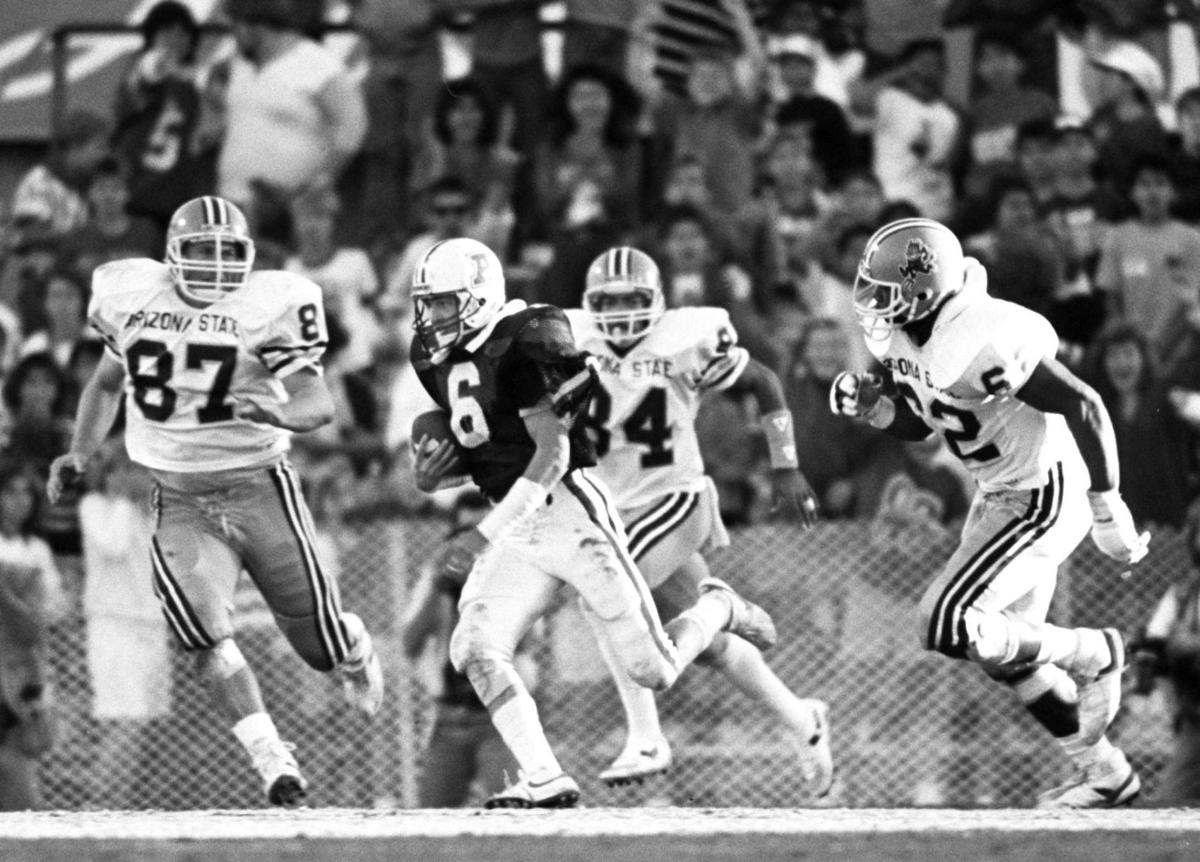 In possibly the most iconic play in Territorial Cup history, Chuck Cecil returns an interception 106 yards for a touchdown in No. 14 Arizona’s 34-17 win over No. 4 ASU in Tucson in 1986. 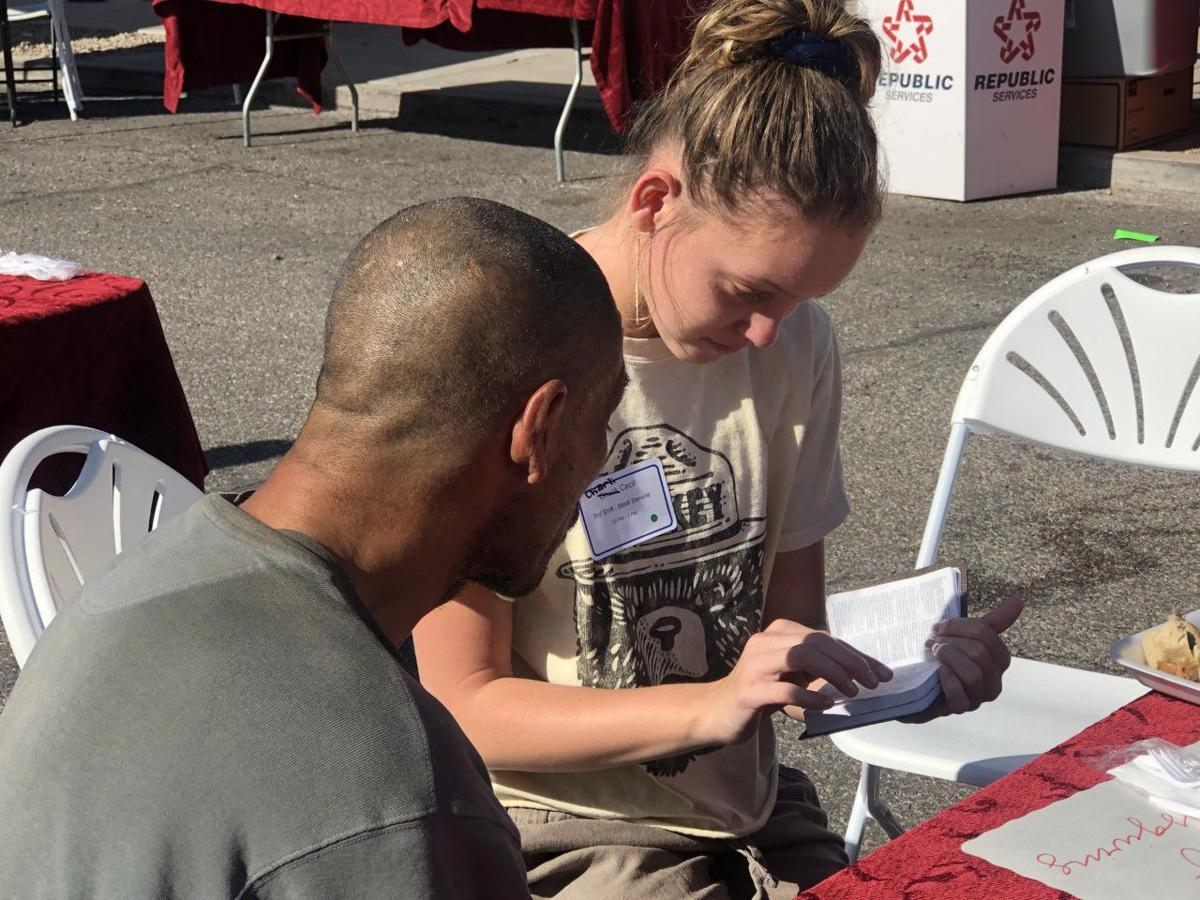