Case Cookus chose football over firefighting, got hot, and found a home at NAU
Share this
1 of 2 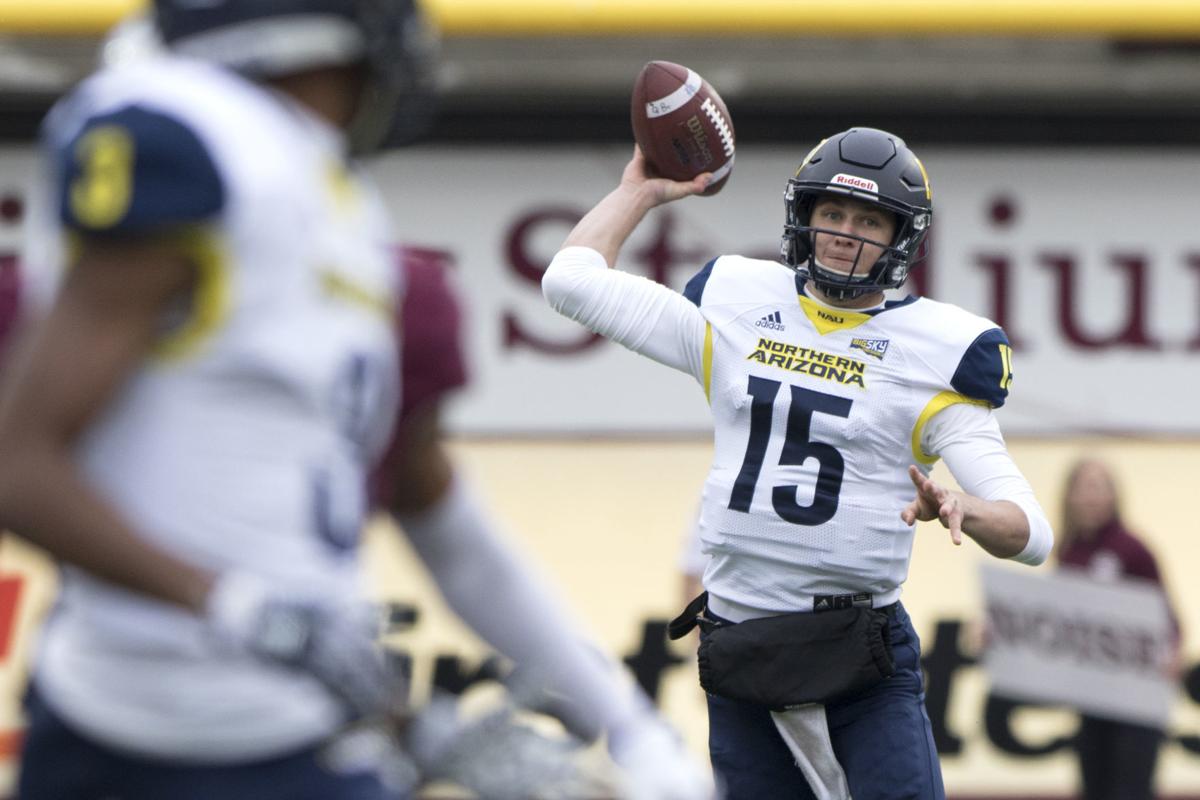 Northern Arizona quarterback Case Cookus throws a pass against Montana in their 2017 game. Cookus is back for one final season after missing parts of two years with injuries. 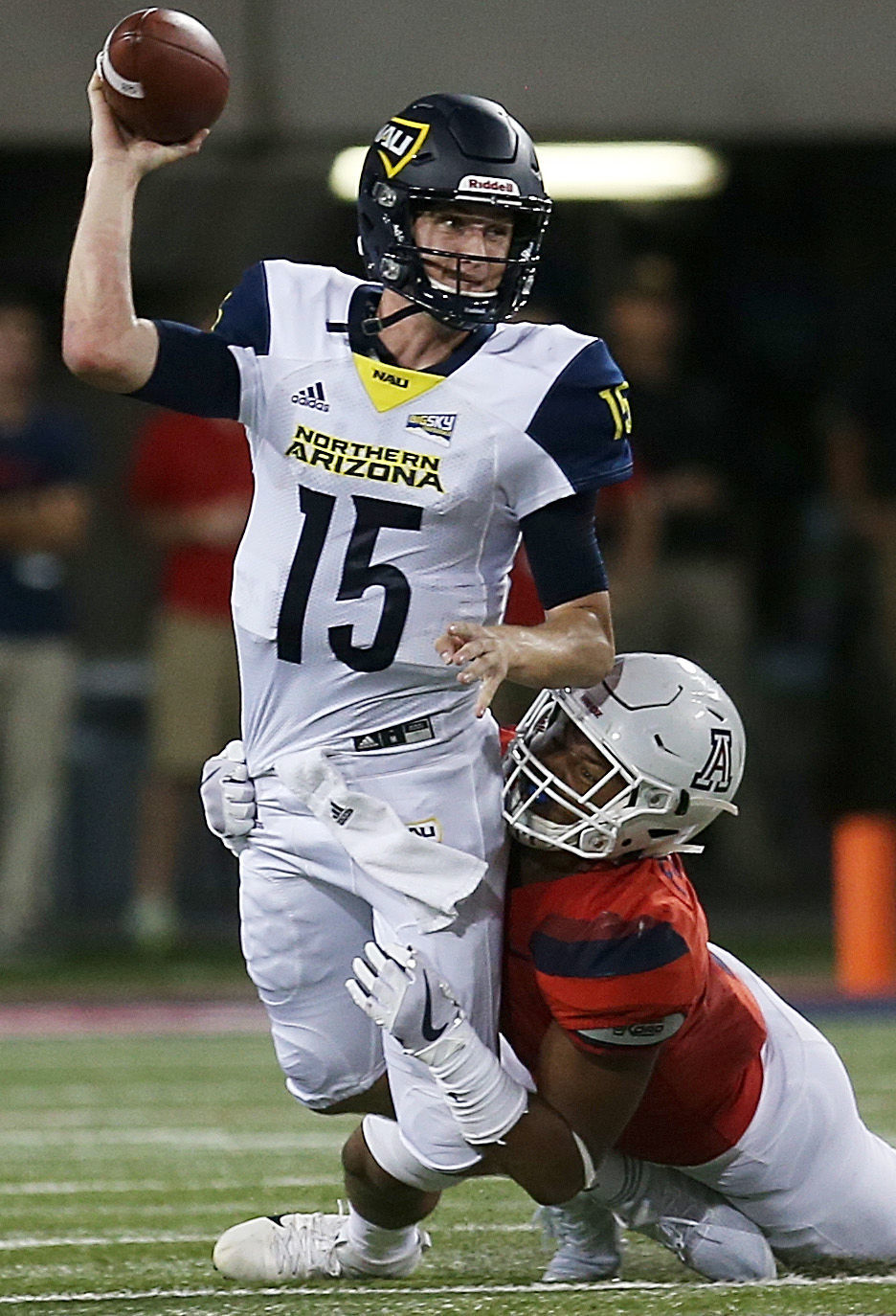 At one point, Case Cookus was just about ready to turn in the football for the fire hose.

Now, after a topsy-turvy career that saw him debut as the best freshman quarterback in FCS football, only two lose two of the past three years to injury, you couldn’t pry him from the field.

Northern Arizona’s would-be four-year starting quarterback — and the son of a Los Angeles County Fire captain — believed he had something to offer coming out of Thousand Oaks High School, despite his slight stature. His Ventura County High School Football All-Star Game MVP only proved it to him.

Lightly recruited because of his then-6-foot-1-inch, 160-pound frame, Cookus considered a career in firefighting before some prodding from his father and his high school coach prompted him to enroll at Ventura College. He was all set to start for the Pirates, but a minor injury was about to cost him a few games to begin his freshman year, and his head coach, Steve Mooshagian, recommended he grayshirt to preserve his eligibility.

Cookus sat out the season and grew two inches, put on 20-plus pounds, and, during spring ball, seized the starting role once more.

Then he heard NAU needed a quarterback. The Lumberjacks had been jilted by Connor Brewer, the former Arizona quarterback who spurned NAU to transfer to Virginia, and so they brought in every local junior college quarterback, summoning all they could from California and Arizona. Cookus out-shined them to a man.

“We told them all, ‘If you come out here, you might just be our starting quarterback,” NAU offensive coordinator Aaron Pflugrad said. “He really blew us away. He was throwing BBs out there.”

Despite having less than two weeks to prepare before arriving on campus, Cookus won the starting job in fall camp. Then he went out and threw for 3,117 yards and 37 touchdowns with five interceptions, winning Walter Camp All-America Team honors, Associated Press third-team honors and the NCS National Freshman of the Year award.

Pflugrad had found his man, and he put him to the test.

“You don’t get good by watching,” Pflugrad said. “You get good by experience. You come here and we’ve only got 63 scholarships, and you get the chance to play and develop and continue to get better. I think Case has really taken advantage of it. This is a guy who has more experience than almost anyone coming out of the Pac-12 or MWC.”

Some of it good, some of it bad.

After his star turn as a freshman, Cookus stormed out of the gates as a sophomore, passing for nearly 1,200 yards and 13 touchdowns with one interception before suffering a season-ending shoulder injury in the fourth game.

He bounced back as a junior, throwing for 3,413 yards and 22 touchdowns with six picks, but tragedy struck even sooner as a junior, when he broke his collarbone in the first quarter of the season’s second game.

“The first year when I got hurt, I hurt my throwing shoulder, and I’m thinking, ‘Am I going to throw the ball the same way? Can I even throw the ball?’ You get so many bad thoughts in your head,” Cookus said.

“The second time through, it was a little easier in the process of getting back. Knowing how far along I was, 50%, 60%, 80. I knew what my arm strength was going to be. It was about staying focused on one day at a time.”

Despite the injury, Coo-kus kept his perspective.

“Everything happens for a reason. You can’t just rest your hat on what you’ve done,” he said. “It’s humbling. I’ve experienced the game being taken away from me twice now. It brought me closer to the game.”

At one point, he was ready for it. He’d had a nice enough high school career. Was a small-town hero for a couple years. He’s been the same in Flagstaff. Part of the reason he rehabbed so hard from his latest injury was to give the school one more year.

“NAU was the only one to trust me,” he said. “They trusted me to run the offense my freshman year. I’ll be coming back for games for 10, 20 years into the future. This is an awesome place. They treated me like family. It meant a lot for me to finish what I started here.”

And if this is it? If the NFL doesn’t come calling — even though many NFL Draft experts have him pegged as a player to watch — Cookus won’t hang his head.

“A lot of guys across the country, this will be their last year, and they haven’t experienced the pain of losing this game yet,” he said. “When my time comes, I’ll be ready. I’ll be upset, but prepared for my future.”

Cats Stats: Why Arizona needs to find its form at home — and what’s behind its struggles on the road

'I got wiser': Rangers' Willie Calhoun says getting kicked off UA baseball team changed his life

Now Calhoun is a key cog in the rebuilding Texas Rangers.

Ex-Cat Kevin Ginkel, with new arm slot and a chip on his shoulder, is dominating the big leagues

The hard-throwing member of Arizona's last College World Series team has been one of Major League Baseball's top relievers since August.

Northern Arizona quarterback Case Cookus throws a pass against Montana in their 2017 game. Cookus is back for one final season after missing parts of two years with injuries.